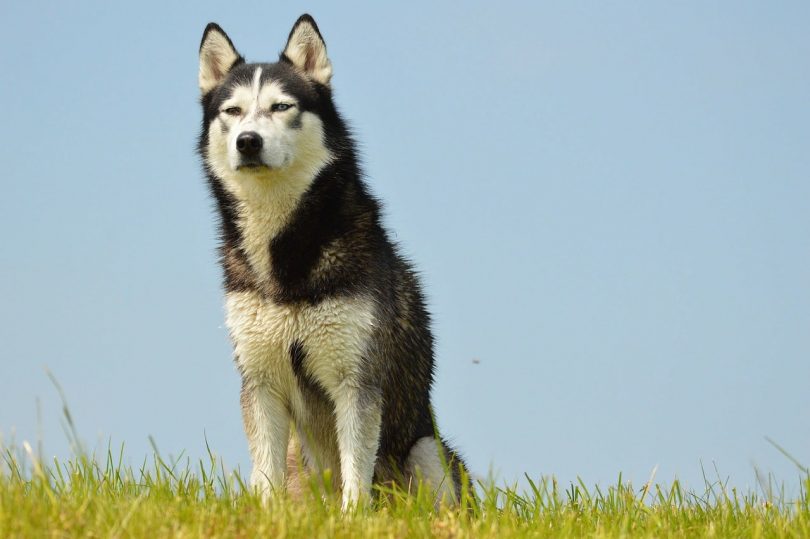 The Siberian Husky is one of the most popular dog breeds in the world – for good reason! And if you’re planning to bring one home, you’ve made a wise decision. But are Huskies capable learners with high intelligence?

So, are Huskies smart? How smart are Huskies? Huskies are “average” intelligent dogs according to canine psychologist Stanley Coren. In Coren’s dog intelligence trials, Siberian Huskies ranked 74th out of 138 dog breeds for obedience & working intelligence.

Despite their relatively low ranking, Huskies are rather smart in other ways. To fully grasp the intelligence of Huskies, let’s dive into the intelligence tests conducted by Stanley Coren. Well continue by examining what exactly makes these dogs smart.

How We Measure a Husky’s Intelligence

Stanley Coren is a canine psychology PhD and professor at the University of British Columbia in Vancouver. In his experiment, Coren asked all the obedience trial judges in North America (Canadian and American Kennel Club) to help with his research on dog intelligence.

To his surprise, 199 obedience judges responded and offered to help with his research and studies – accounting for nearly half of all North American judges at the time.

Based on Coren’s criteria, the judges were asked to test and rank each individual dog breed in obedience trials. His dog intelligence criteria was based on two factors:

Of the submissions, Coren only accepted dog breeds with at least 100 responses. Otherwise, they weren’t qualified to be included in his final list of smartest dog breeds.

This criteria was met with criticism, as well as praise. While we think this is a great starting point for calculating dog IQ, it certainly doesn’t tell the whole story.

How the Husky Performed

Siberian Huskies didn’t do too poorly, but they didn’t do well either. They were right around the middle as an average intelligent dog breed.

This meant that Huskies needed 25 to 40 repetitions to learn a new, unknown command. As for obedience, Huskies are will obey a known command on the first try with a 50% (or better) success rate.

For reference, other popular dog breeds in the same intelligence class as the Husky include: the Australian Shepherd, Boxer, Great Dane and the Cavalier King Charles Spaniel.

Husky Intelligence vs. Other Dogs

Now that we understand how smart an average dog is, how does the Husky compare to other, more intelligent dog breeds? The intelligence classes above the Husky’s include: above average dogs, bright dogs and the top 10.

Above average dogs are able to learn a brand new command with just 15 to 25 repetitions. They’re also able to obey a known command on the first attempt with a 70% plus success rate. For reference, the Dalmatian, Miniature Pinscher and Giant Schnauzer make this list.

Bright dogs are able to learn a new command with only 5 to 15 repetitions. Likewise, these dogs will obey a known command on the first try with an 85% (or better) success rate.

Some popular dogs in this class include the Corgis, Cocker Spaniel, Pomeranian and the Bernese Mountain Dog.

Finally, the top ten dogs are in a league of their own. These dogs can learn a new command with 5 repetitions or less! Plus, they’ll obey a known command on the first try with a 95% or more success rate.

These are your Border Collies, German Shepherds, Rottweilers, Golden Retrievers, Doberman Pinscher, Labradors and more. Coincidentally, the smartest are the most popular dogs in America.

Is Your Husky Smart?

Perhaps there’s more to dog IQ than just obedience tests. To truly gauge how intelligent these dogs are, we decided to survey real Husky owners.

From the popular Husky sub Reddit and various other dog forums, we asked ten owners this question. Here’s what they had to say about their Husky’s intelligence.

1. Jdott says Yes: “We got him at 10 weeks and he knew sit, shake, down, stay, and come by 14 weeks. Very intelligent dogs. However, for as intelligent they are, they are equally as stubborn.”

2. Rawbee3d says Yes: “They are such intelligent dogs, I genuinely think he understands the majority of what I want just based on voice tone and body language.”

3. Undflight says Yes: “I have a beautiful Siberian Husky pup (5 months old, Aurora) and she is incredibly intelligent; caught on to potty training and simple commands very quickly.”

4. Floridahuskies says Yes: “They are amazingly loving, but incredibly intelligent dogs. They are high energy and love to play.”

5. Bicycle_mice says No: “My husky isn’t the brightest either but I love her so much. Mostly because she isn’t smart enough to get into any trouble.”

6. Sarabear says Yes: “We taught him out to sit, shake, and “up” in the first week we had him. He is highly intelligent!”

8. Anonymous says No: “My husky named stinky has got to be the dumbest dog in the whole world. But she also has the biggest heart and we love her.”

9. Eatsleepjeep says Yes: “I wish my husky were dumb. Then she’d probably cause half the problems she does now. Little girl is too clever by half.”

10. Njibbz says Yes: “Huskies are high energy and high intelligence. But, this can cause problems when they are left alone. Most husky owners will crate their dogs while they are away because even ones who are well behaved while you are around can cause mayhem when they know they aren’t being watched.”

Though we only collected 10 responses from Husky owners, it was difficult finding owners that actually thought their dog wasn’t highly intelligent.

Why Huskies Rank Low in Intelligence

According to our survey, most owners believed their Huskies were smart. So how did they perform “average” compared to other dog breeds? Let’s look into the reasons why these dogs aren’t ranked higher in dog intelligence.

Most owners agree that Huskies are extremely stubborn dogs. In fact, these dogs can be independent minded and will constantly test your alpha dominance over the pack (family).

Huskies are very intelligent, but very stubborn. Mine knows exactly what I ask her to do because she’ll follow commands impeccably if I have a treat in my hand. If I don’t have a treat and she doesn’t feel like following commands, she’ll play dumb.

Based on Coren’s obedience-focused criteria and the Husky’s stubbornness, is it really a surprise the Husky didn’t perform so well? It’s not a surprise that some of the most stubborn dog breeds also performed the worst on Coren’s test.

But just because your Husky doesn’t obey a command doesn’t mean they don’t understand what you’re asking. Most likely, they do.

I’m not saying it’s impossible to fully train a Husky. However, it can be pretty difficult to train a Husky. You just need to have a lot of patience and find the right motivators for your dog.

In Songbird81’s case, food is the main motivator. Because all individual dogs are different in personality and temperament, you would need to experiment to see what works best with your Husky.

Why Are Huskies Smart?

Siberian Huskies are smarter than you think. And smarter than the intelligence rankings make them out to be. They’re very smart in many ways other than obedience.

Though it makes a lot of sense that quick-learning is correlated with a higher dog IQ, it isn’t everything. According to Stanley Coren, there are two other dimensions of dog intelligence, including instinctive and adaptive intelligence.

Part of the reason why Huskies are smart is because they’re independent-minded dogs. In other words, they’re intelligent enough to make decisions for themselves versus being led by a human.

We call this adaptive intelligence, which refers to the dog’s ability to learn and think on its own, while being able to solve problems. And in my opinion, it may be the most important aspect of dog intelligence.

Huskies are smart and they know it, which is also why they’re also stubborn. They won’t necessarily do your bidding for the sake of it. If you tell a Husky to “come,” they’ll ask “why?”

For example, one Husky owner tells us just how smart her dog is:

It’s somewhat rare that our husky will gladly follow when I tell him to come. He usually just sits by the cabinets (holding the treats) because as soon as I go near him he’ll signal to me that he wants some treats.

It’s not like Amanda’s Husky doesn’t know what “come” means. He’s smart enough to learn what works and what doesn’t when it comes to getting treats. And as a result, it may come off as stubbornness or “low intelligence.”

You can ask almost any Husky owner and they will tell you that Huskies are both stubborn and independent dogs. But I’d argue it’s really the dog breeds with these qualities that are intelligent!

Huskies are some of the best working dogs the world has to offer. Nearly all working dog breeds that do independent work are highly intelligent dogs, including the Siberian Husky.

The final component of dog intelligence is instinctive intelligence and refers to the skill or ability that the dog was bred for.

Huskies have a very specific skillset. They were originally bred to pull sleds in the blistering cold for hundreds of miles. They’re able to do this with no human training, which requires this very special type of intelligence.

But because of their seemingly unlimited amount of energy, they’re useful in many jobs. For example, during WWII, the army used Huskies as search and rescue dogs. They were also trained for transportation, communication and freighting.

However, they aren’t wired to have a close work-relationship with humans, such as herding, hunting and gun dogs. So it makes sense that they’re somewhat independent at times.

Why Get a Husky?

When choosing which dog breed to bring home, it’s important that owners don’t focus so much on these silly obedience/work intelligence tests and rankings.

Rather than asking how smart Huskies are, you should be asking whether the Husky’s temperament and personality matches yours. Do they fit your needs?

Huskies are free-spirited dogs. Still, they retain the affection and loyalty seen in many dog breeds. They’re social by nature and love playing with humans. For that reason, they don’t make great guard dogs.

They can be a little mischievous at times, but that’s all part of the Husky’s charm. If after all this, you feel the Husky is right for you – go for it. After all, there’s a reason why they’re always in the top 15 for most popular breeds.

So, do you own a Siberian Husky? And, is your Husky smart? Let us know in the comments section below!