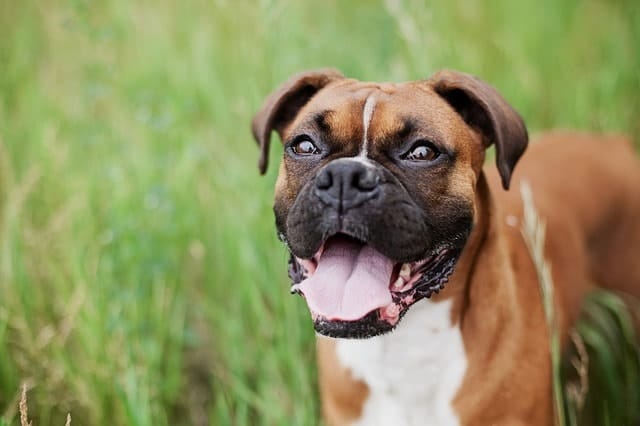 Boxers are some of the most cheerful and fun-loving dogs. They’re one of the best family dogs from the working group because they’re affectionate, loyal and active. However, many new owners may question the intelligence of these dogs.

So, are Boxers smart? Boxers are “average” intelligent dogs. Furthermore, they’re ranked the 90th smartest dog breed out of 138 qualifying breeds – according to canine psychologist Stanley Coren. Though they may lack in obedience & working intelligence, Boxers are great at learning for themselves and from past experiences.

There’s nothing wrong with being average. Though Boxers ranked fairly low on the smartest dogs list, there are reasons why they’re actually smart dogs. Let’s further examine Boxer intelligence.

How We Measure a Boxer’s Intelligence

The Boxer just cracked the top 100 list of smartest dog breeds – taking the 90th place. If you’re anything like me, you may be wondering how the “experts” came to this conclusion?

Canine psychologist and pHD, Stanley Coren, is credited for developing the intelligence rankings of dog breeds. In his research, he asked 199 North American obedience trial judges from the AKC and CKC to help.

The obedience judges were given a criteria to evaluate and rank as many dog breeds as possible. Here’s what they based their trials on:

Though Coren received a huge number of responses from the obedience judges, not all dog breeds made the cut for his final intelligence rankings. Only dog breeds with at least 100 assessments were qualified.

How the Boxer Performed

The Boxer scored in the “average intelligence” category, towards the bottom of the group. This may not seem that great, but you’d be surprised to see what other popular dog breeds are in the same intelligence class.

For reference; Australian Shepherds, Huskies, Great Danes, Dachshunds, Greyhounds and Shiba Inus were all in the same class. Coincidentally, these are some of the most popular dog breeds in the world – that’s some great company!

Being in the average intelligence class means that Boxers were able to learn a new command with 25 to 40 repetitions. You’d be able to teach a Boxer a new command in an hour or so.

On the other hand, Boxers were able to obey a known command on the first try with a 50% or better success rate. With the right motivators, you may be experience a much higher success rate.

Boxers vs. The “Smartest” Dogs

Boxers may not be the most obedient dogs in the world, nor are they fastest learners. But how do they compare to the world’s “most intelligent” dog breeds?

Dogs that scored and performed the best are in a class of their own. In fact, this intelligence category is conveniently the top 10 smartest dogs.

These smart dogs include the Poodle, Rottweiler, German Shepherd, Dobermann, Golden Retriever and the Labrador Retriever. Coincidentally, they’re some of the most popular dog breeds in America too.

Impressively, they’re able to obey a known command with a 95% or better success rate! Not only are they smart, but also some of the most obedient pets.

Is Your Boxer Smart?

Sometimes it’s better to get the opinion of real Boxer owners. And surely, that’s what we did. We asked this question and surveyed owners from the popular Boxer Subreddit. Here’s what they had to say about their Boxers.

1. Cr250guy says Yes: “I consider boxers to be a fairly intelligent breed in general (I’m a vet). I always tell people, my boxer is quite smart. He will sit and mull over a plan in his head and I can see him thinking through a problem.“

2. Squiddsential says Yes: “I’ve had labs, huskies and golden retrievers and i’ll say without hesitation that my boxer is the most smart and intuitive breed i’ve had.“

3. Jameson837 says Yes: “It’s a little bit ridiculous how little respect is given to the intelligence of the Boxer. They’re smarter than any dog i’ve met. Seriously, sometimes too smart for their own good.“

4. Thebryantt says Yes: “Just showed her what to do and have her treats, she has learned every trick she knows in one day she’s so smart!”

5. Shenochs says Yes: “[My rescue boxer’s] progress has been amazing because boxers are SO. SMART. But, of course, when he transitions to my house, he will likely regress until he’s more comfortable with us.“

6. Shimmysteph says No: “I’m sorry, there’s no way I can consider my Boxer Franky an intelligent dog. Sure they love me and are fantastic dogs, but they really really don’t like obedience…for the most part.”

7. Clusterphu says Yes: “Don’t let the silly faces fool you they are a lot smarter than people give them credit for. They can be a bit clumsy sometimes, they seem to have an innate ability to step on your feet and crotch when you least expect it.“

8. Sacreduato says Yes: “I’ve had all sorts of mixes, my childhood dog was a Lab/German shepherd mix and I thought she was smart but some of the stuff my Boxer does is downright uncanny.“

10. Juantheman01 says Yes: “As long as I have his favorite treats, he’s the smartest do in the world. He’ll bend over backwards to get a piece of those treats…“

Boxers may be the most obedient dog breeds ever, but is it fair to call them anything less than smart? The biggest flaw with the Stanley Coren trials is the criteria used to measure dog intelligence.

It’s extremely difficult to standardize a dog IQ test. Not all dogs are obedient because different breeds and individual dogs have different motivators.

For example, the highest ranked dog breed is the Border Collie. However, these working dogs love obedience training because they love to work and do it for the sake of working.

Some Boxers may have motivators such as dog games, treats or cuddle time – it really depends on the dog. It’s worth it for you to take some time to figure out what your Boxer’s motivators are.

It’s been well documented that Boxers are stubborn dogs. Generally, the more stubborn a dog, the less obedient they are. So it’s easy to understand why Boxers may not have performed so well on an obedience intelligence test.

The reality is just because your Boxer doesn’t obey your command, doesn’t mean the Boxer doesn’t understand what you’re asking. In that moment, the Boxer just doesn’t want to obey for whatever reason.

One Boxer owner tells us about his stubborn dog, saying:

My Boxer has turned into a very stubborn little guy. He walks away when you’re trying to tell him to come, or sit even though he definitely knows what they mean.

Many Boxer owners can relate. Some owners suggest trying different treats if you encounter a stubborn Boxer. They’re more willing to obey and train if you have some delicious snacks for them.

Also, it’s best to try obedience training with treats before dinner, rather than after. With a hungry stomach, Boxers may be more willing to comply.

Why Boxers Are Smart Dogs

Fortunately for the Boxer, they excel in both instinctive and adaptive intelligence. Let’s see what really makes the Boxer a highly intelligent dog breed.

Instinctive intelligence refers to the innate ability, skill or instinct of a dog breed. In other words, it’s what the dog was bred for. For example, an Australian Cattle Dog is one of the best herding dogs in the world.

The fact that no additional training is necessary for these dogs to start herding cattle speaks volume. The innate ability to round up cattle, guide them in a formation and drive them to a destination requires a lot of instinctive intelligence.

Boxers were bred for a lot of very different jobs. Believe it or not, Boxers are some of the most versatile dog breeds in the world.

Because Boxers were bred for so many different jobs, they’re pretty much the jack-of-all-trades for instinctive dog intelligence.

Another component of dog IQ is adaptive intelligence. This intelligence refers to what the dog can learn for him or herself. Can the dog learn from past mistakes? Are they able to solve problems?

One Boxer owner gives us his theory. He says:

I feel like a smart dog learns all the rules very quickly. But a Boxer constantly pushes the technicality of the rules and figures out ways around them – child thinking and figuring things out.

If that description doesn’t scream adaptive intelligence, I don’t know what does. Another Boxer owners call them the most intuitive dog breed he’s met, even compared to the “smartest dogs” (Border Collies).

The owner said, “I’ve had two Border Collies and I know a dozen breeds very well, and another dozen well enough. Boxers are among the most intuitive dog breeds.”