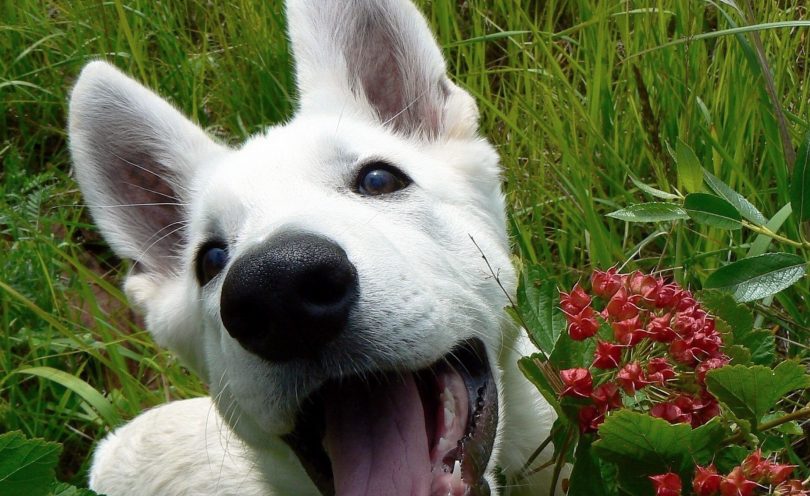 If you haven’t noticed already, dogs are extremely curious and playful animals. But sometimes, that curiosity can put them in a threatening situation.

My corgi, like many other dogs, loves to chase anything, from flies, birds, other dogs and even bees. The problem with a dog chasing bees is that sometimes the bee will want to retaliate or simply protect themselves by stinging what they see as a threat.

It’s actually quite common for dogs to get stung by a bee and dog owners usually freak out when they see it. With that said, ease your mind and don’t worry.

It’s rare for bee stings to result in life threatening situations for your dog. However, it’s also not recommended to do nothing about the bee sting depending on the situation. There are things to consider, leading to certain action steps to take in a bee stinging incident.

Risks of Bee Stings With Dogs


A bee sting is not just a bee sting when it comes to your canine. There are several things to consider when assessing the risks. Factors such as location of the sting, the type of bee and number of times stung by the bee, should all be taken into consideration.

If you’ve ever been stung by a bee, you know that it can be a very painful experience. A single sting can be quite painful and just as irritating for your dog.

However, if your dog has multiple bee stings, the situation could quickly become dangerous depending where they get stung. Unsurprisingly, dogs often may try to eat a small wasp and end up getting stung in the mouth or even the throat many times.

If you suspect multiple bee stings in the dog’s mouth, pay a visit to your local veterinarian as soon as possible.

The majority of bee stings to dogs are on the face from too close of an encounter. This is not surprising as curious dogs will often inspect a bee by sniffing or attempt to catch it with its mouth.

Bee sting on the dog’s face often lead to swelling, but they may experience severe pain if the sting is on a sensitive area of the face. Getting stung on the nose is common and may be the most painful for dogs.

A sting inside the throat may swell and inhibit the dog’s ability to breath, meaning a visit to the veterinarian is necessary very soon.

Perhaps the two most common types of insect stings to dogs are bee and wasp stings. It’s not the sting that causes so much problem, it’s the poison in both these insect’s stinger.

The poison isn’t usually fatal but it can be the case if your dog is allergic to the poison. If you’re not sure, you need to observe your dog very closely to see if they are showing any symptoms of a severe allergic reaction.

Follow the steps below immediately after a bee sting on your dog. If things still don’t look like they’re improving, call the veterinarian immediately and pay the animal hospital a visit.

Stop the Venom from Spreading

If your dog was stung by a honey bee and not specifically a wasp, the stinger will most likely still be in your dog. Locate the sting point and quickly and carefully take out the stinger as soon as possible to reduce the amount of poison that gets into the dog’s system.

The poison in the bee’s stinger can continue releasing its toxins for roughly 3 minutes after detaching from the bee’s body.

Taking Out the Bee Stinger

Be very careful when trying to take out the bee stinger out of the dog’s skin. Use a credit card to scrape the stinger out.

Many people make the mistake of using their hands or a tweezer. However, those methods could potentially squeeze more poison from the stinger into their system.


If you are sure this was a wasp sting, then you can skip this step. Usually it’s difficult to spot the bee and identify its species. So, you’ll want to examine the sting area closer to look for a stinger.

There may be a lot of challenges during this step. For example a long-haired dog breed will make it difficult to locate and remove the stinger.

Also, your dog may not be in its calmest state while experiencing this pain. Try to calm them down as best as possible. You can even bribe them with their favorite treats.

Especially in sensitive areas around the face, your dog will likely feel prolonged pain or soreness. A simple way to relieve the pain and discomfort is by mixing baking soda and water to form a paste.

Apply this paste to the wounded area and it should reduce your dog’s pain.

There’s a very good chance the bee venom will induce some swelling. Use a cold compress to apply to the swollen spot. If you don’t have a cold pack lying around, get a piece of cloth and soak it in cold water.

Apply the wet cloth to the sting point and if possible, wrap the cloth around it.

Give Your Dog Benadryl


To reduce the swelling, you can give your dog the over-the-counter drug called diphenhydramine, more popularly known as Benadryl.

Although it is generally very safe for dogs to take this specific antihistamine, It’s still important to consult with your doctor about giving them the correct dosage.

Benadryl dosage will mainly be determined by your dog’s weight and/or size.

Pay very close attention to your dog, especially if it’s the first time they are getting stung by a bee. Even if they’ve been stung before, the poison from bee species to bee species will vary.

For example, honey bees and wasps have different inherently different poisons in their stinger, but produce similar effects. Symptoms of a severe allergic reaction will require immediate attention by your veterinarian.

Bee Sting on the Dog’s Eye

This is a nasty and inconvenient area for your dog to get stung by a bee. Unfortunately, it does happen to dogs from time to time.

It’s quite common for dog owners to become alarmed, fearful that their dog may lose their eyesight. This is rare, but you need to take action as soon as possible.

If your dog gets stung on the eye, you need to still remove the stinger (unless its a wasp). There’s a very good chance the sting didn’t happen on the eye itself, but rather the eye lid.

The best thing to do for your dog is to take him to the animal hospital quickly. Don’t wait for any symptoms of allergic reaction. Your Veterinarian will be able to handle it from here on out.

Dog Stung By a Wasp

The main difference between a bee sting and a wasp sting is that the wasp doesn’t detach its stinger. This means that the stinger won’t be stuck in your dog’s skin, but there is still venom in their system.

The poison released by a normal honey bee and a wasp are fairly different, but have similar effects. So the treatment process is the same for the most part. The only difference is not having to do the first step of taking out the stinger.

A bee sting will release more venom into the dog’s system because the whole stinger is stuck in the victim. In fact, about 50 micrograms of venom is released.

On the other hand, a wasp sting is very quick and will only release about 2 to 15 micrograms of venom per sting. So comparing sting for sting, I would take a wasp every time.

The problem with Wasps is that they can sting multiple times, unlike its honey bee counterpart. So if you realize your dog was under attack by a wasp, you may want to inspect other parts of the dog to check for more wasp stings.

Are Dogs Allergic to Bee Stings?

Like with humans, some dogs are allergic to bee stings. An allergic reaction is not very good as your dog can go into anaphylactic shock and possibly die if not given immediate medical attention.

If your dog has been stung by a bee for the first time, it’s crucial to keep an eye on them immediately following the incident. Look for symptoms that show whether they may be having an allergic reaction.

Usually when a dog gets stung and begins to vomit within 10 minutes, they are most likely going to go into anaphylactic shock.

In this state, they may lose consciousness, become very dizzy or even struggle heavily to breath. This is a very critical time period and the only thing you can do if get your dog to a veterinarian right away.

When I talk about bee sting treatments, owners always display fear. This fear is by no means warranted. Treatments will vary greatly depending on the severity of the dog’s allergic reaction to the sting.

In most cases, simply following the steps above will be enough. The action plan not only relieves your dog from discomfort, but should help with healing. only time will heal for these common bee sting cases.

I have taken my dog into the veterinarian before when she got stung by a bee. But because there wasn’t a severe allergic reaction, all the vet really did was give her Benadryl. If you’re sure there is nothing serious, it might be a good idea to save the trip.

In the case of a severe allergic reaction, treatment at the animal hospital or clinic is necessary. The veterinarian will most likely give the canine patient IV fluids in order to prevent them from going into anaphylactic shock.

A mild form of steroids and Benadryl will be injected into the bloodstream for immediate release and effects of the drugs. Most veterinarians will have to monitor the dog for 24 to 48 hours to see when they are healthy enough to return back home.

If your dog enters shock from a severe allergic reaction, do not panic. Your only goal is to get your dog to a veterinarian as soon as possible. In most cases, they will be perfectly fine. The veterinarian will know what the or she is doing because bee stings are common.

In Conclusion: Bee Stings and Dogs

Having your dog stung by a bee can be a very scary experience, especially if its their first time. Regardless of whether it’s happened, it’s important to learn the risks and challenges that arise with bee stings.

This way, you’ll be able to make an informative decision in the moment or at the animal hospital.

In most cases, the action plan on bee stings with dogs presented in this guide will get you through this awful experience.

If something serious like an severe allergic reaction happens, take a breath and calm down. Your veterinarian will help you both get through this.

You see? Your dog will be fine.

The Smart Canine has thoroughly researched on the subject of bee stings with dogs and have consulted with veterinarians. However, this guide is meant to act as an informational guide for dog owners. This means that we still recommended that you consult with your dog’s veterinarian.