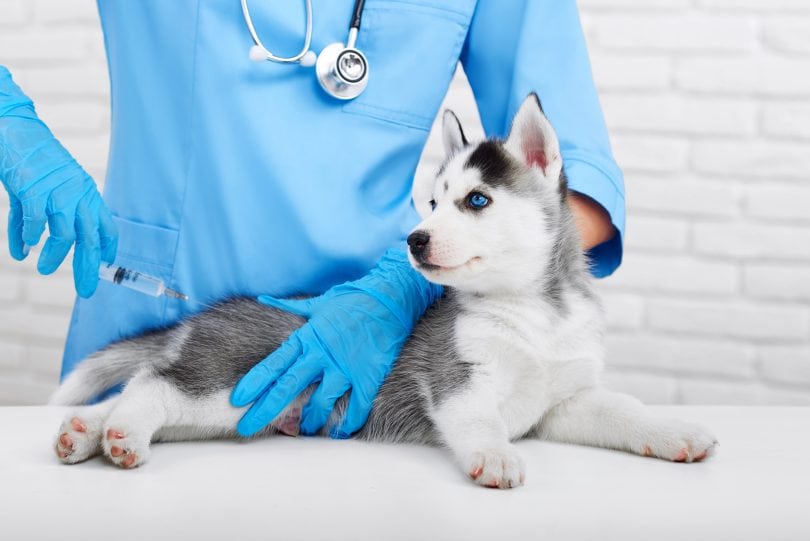 As soon as you pick up your new puppy, it’s essential that you do the necessary research and actively get your new companion the proper necessities for a healthy living – including their puppy shots. One of which, is the DHLPP vaccination for dogs.

Unlike the Rabies vaccine, DHLPP is not required by law in the United States. However, this does not mean that it’s not important.

Some of the diseases that DHLPP (DHPP) protects your dog from can seriously hurt your dog’s long term well-being and in some cases, lead to death. This is why this vaccine is highly recommended.

What is the DHLPP Vaccine? 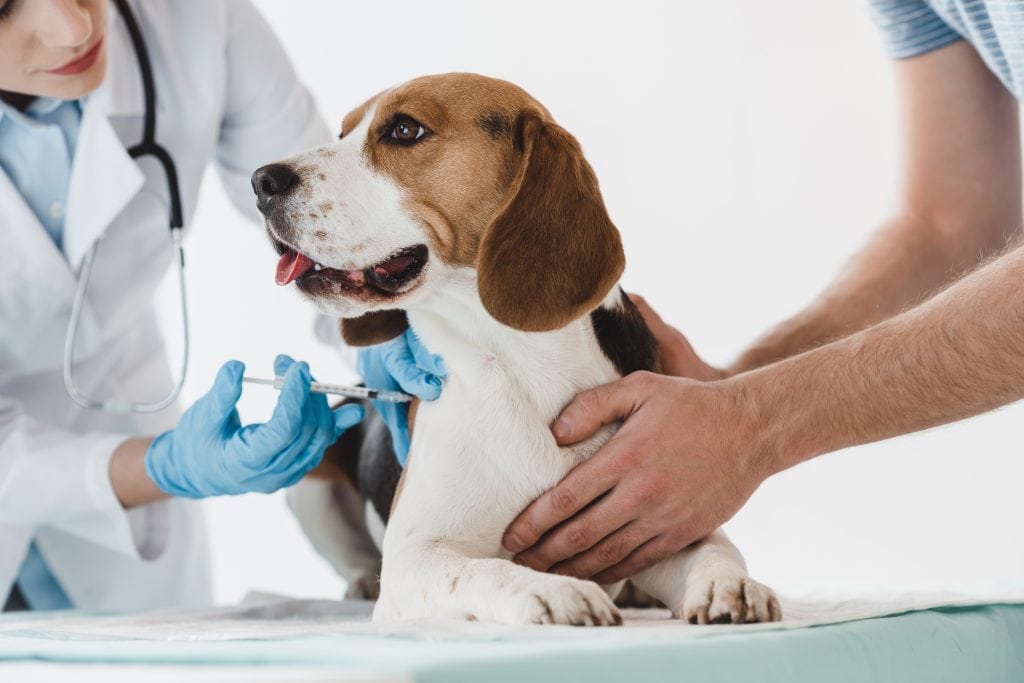 The DHLPP shot is a 5-in-1 vaccination for dogs comprised of both core and non-core vaccines. The abbreviation stands for the 5 different medical conditions that this vaccine protects your dog from: Distemper, Hepatitis, Leptospirosis, Parvovirus and Parainfluenza.

The vaccination for Distemper, Adenovirus (Hepatitis) and Parvovirus fall into the core dog vaccination group, while Leptospirosis and Parainfluenza are classified as non-core vaccinations.

Despite the numerous conditions this vaccine protects your dog from, it’s often referred to as just the Distemper vaccine.

Depending on your puppy, some veterinarians start off with DHPP (without Leptospirosis) initially, but end the puppy’s shot schedule with sessions of the DHLPP vaccination (with Leptospirosis).

Not all veterinarians agree on the exact schedule, but this is one example from Dr. Francis Park of South Hills Animal Hospital in California.

Typically, your dog receives an optional administration of DHPP in the first session at weeks 5 to 7. However, many veterinarians and owners opt to start DHPP at weeks 8 to 10.

Your puppy receives the first shot of DHLPP in weeks 11 to 13. The last remaining DHLPP booster of the puppy’s shot schedule will take place in weeks 14 to 16.

After your puppy’s set of DHLPP, they will need to receive their DHLPP booster once every three years.

Depending on the vet’s practice and your dog’s condition, some animal hospitals will recommend annual boosters of DHLPP. Always consult with your veterinarian on your dog’s DHLPP boosters. 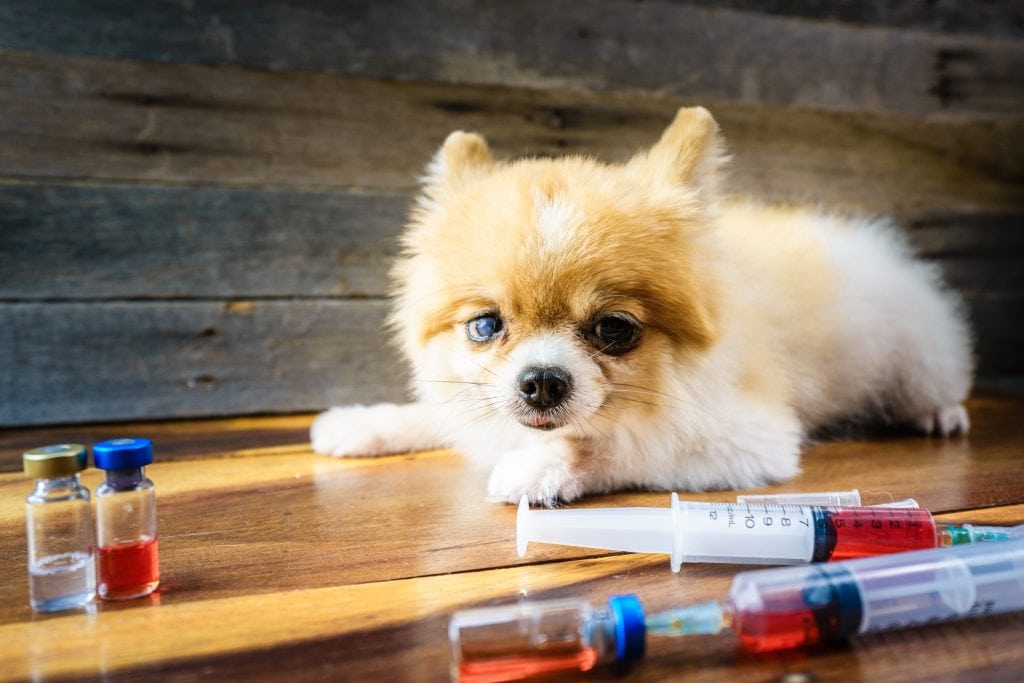 As mentioned, DHLPP stands for 5 separate medical conditions protected by this single (5-in-1) shot. Let’s dive into the disease that the DHLPP vaccine prevents your dog (or puppy) from contracting.

The first letter of ‘DHLPP’ refers to Distemper, a serious infection caused by the highly contagious Distemper virus. This virus can spread to other dogs by air or bodily fluids, such as saliva, nasal discharge, fresh urine, or blood.

Because of this, this disease is not uncommon in crowded kennels, such as your local shelter.

After a dog contracts the Distemper virus, there may be some moderate to severe symptoms. Some of which, include:

This virus can become fatal if the infection spreads to the respiratory system and/or intestinal tract. In severe cases, the infection can spread to your dog’s central nervous system (CNS).

The Adenovirus Type-1 shot is classified as a core vaccine for dogs because of how deadly hepatitis can be in dogs. In fact, according to The Merck Manual, the mortality rate of canine hepatitis is 10 to 30%.

Most cases of death from hepatitis happens in young dogs, which is why the  DHLPP vaccination is a crucial in puppy shots.

Some symptoms of Canine Hepatitis:

Severe symptoms such as bleeding disorders can occur, which leads to hematomas (a solid swelling of clotted blood within the tissues) to form in the mouth.

Canine hepatitis has a relatively high risk for death in dogs and comes with many unpleasant symptoms, so getting the DHLPP shot is highly recommended for this reason alone.

The “L” in DHLPP is a non-core vaccine that prevents the contraction of two different strains of Leptospirosis – Caicola and Icterohaemorrhagiae.

Leptospirosis is a bacterial infection and a zoonotic disease, meaning that it can spread from dogs (animals) to human.

This disease is usually contracted in rural areas of the world where dogs are exposed to wild animals and/or drink from natural bodies of waters, such as rivers, streams and lakes.

Parvovirus stands for one of the two Ps in DHLPP and is classified as a core dog vaccination. This infectious disease affects mainly the gastrointestinal tract of your dog and often leads to death (if untreated), especially with young puppies.

Still, it’s better to be safe than sorry – meaning, just get your puppy this crucial core vaccine to prevent the possibility.

Parvovirus in dogs can be contracted through contact with a contaminated environment or through feces of other dogs. This means that almost anything that other dogs have been around can potentially have the virus.

Anything from bowls to shoes to even the floor can be contaminated. In addition, Parvovirus is extremely difficult to kill and can live in an environment for over a year.

It’s important to not walk your puppy or leave them out in an outdoor setting before they receive their DHLPP vaccine. Failure to do so can potentially result in this deadly infection.

When taking puppies to get their first set of DHLPP, always hold them in your arms or sit them on your lap during your journey to the animal hospital.

Some symptoms of Parvo in dogs include:

Remember, Infected dogs may show only one symptom! If anything feels wrong with your puppy, consult with your veterinarian as soon as possible. Your puppy’s life may depend on it.

The last component of the DHLPP vaccine is Canine Parainfluenza, which is a common virus responsible for the troublesome kennel cough in dogs.

There are several different pathogens capable of giving your dog the kennel cough, such as the Bordetella bacteria. However, the good news is that there’s a Bordetella vaccine as well.

Like the Bordetella shot, Parainfluenza is listed as a non-core vaccination because it protects your dog from an illness that won’t likely cause any long-term health issues. Make no mistake, the kennel cough is bad and can be a great nuisance to both you and your dog.

However, a dog can usually recover from it with or without medical treatment. Regardless, I would still consult with your veterinarian if your dog has contracted the kennel cough.

This is a highly contagious virus, and often contracted in a space crowded with dogs, such as kennels, rescue centers, day care, groomers and more.

Symptoms of Kennel Cough include, but are not limited to: 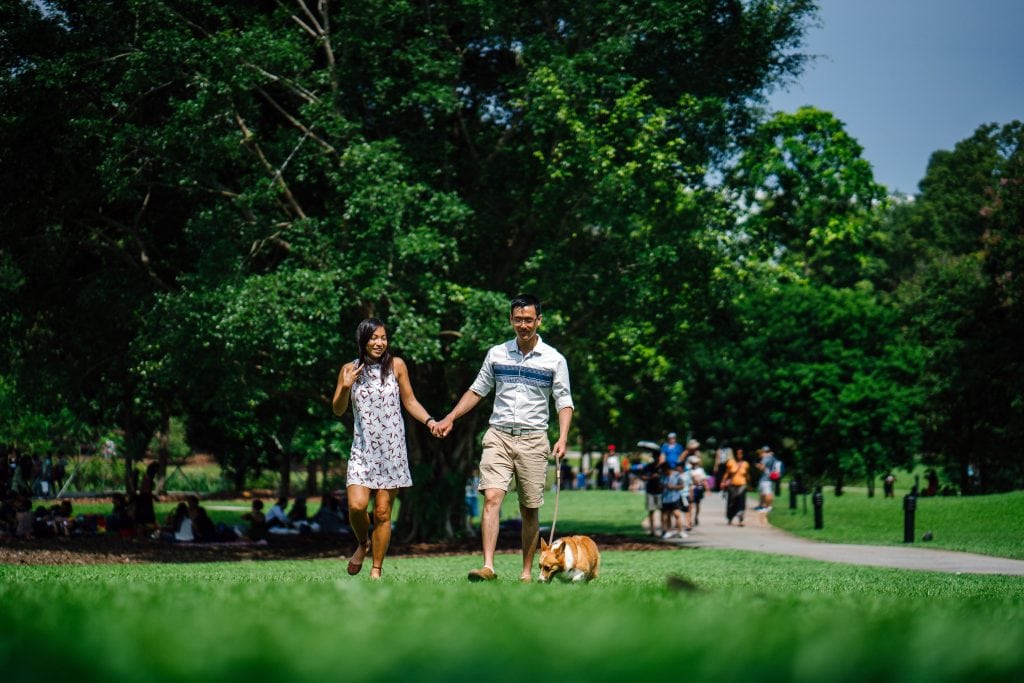 The price of the DHLPP vaccine will depend on external factors such as location. Animal hospitals and clinics in affluent neighborhoods tend to charge more for vaccinations compared to poorer cities. However, price of DHLPP should not fluctuate too much.

The average cost of the full set (three total) of DHPP/DHLPP should run you about $80. Generally, if you shop around, you’ll be able to find them in the price range of $65 to $95.

A single booster shot can run you around $20 to $30, depending on your clinic.

DHLPP vaccinations are relatively cheap, but can still be costly in difficult situations. Fortunately, there are ways to finding low cost dog vaccinations that are more affordable. There should be no excuse to getting your dog the proper medical treatments for a healthy living.

If you’re willing to take the extra time, driving to a neighboring city with better pricing may be an option. All it takes is a few minutes to research on Yelp and picking up the phone to call in to ask.

Don’t expect to save significant money, but you’ll more often than not save a few extra bucks that can add up.

Pet Financial Aid – This is a real thing and has helped countless dog owners in need, all over the country. There are charities that provide assistance in paying for proper dog vaccinations if you take the time to look into.

Lucky for you, the Humane Society has compiled a convenient list of organizations that can provide pet financial aid. Click here to see the list. Some organizations provide assistance to those in a specific state, while most cover the whole country. Always double check before contacting the organization.

Negotiate with your vet – Sometimes we forget that veterinarians actually love animals, and above all, are human too. If you’re seriously struggling to pay for your dog vaccinations, you may be able to negotiate down the pricing with your vet.

Be honest and let them know. You may be surprised at the results of negotiating with your vet.

At the very least, you may be able to negotiate a very affordable payment plan with them. A small discount on top of a payment plan may not be out of the question. It doesn’t hurt to ask.

For more information on how you can get cheap or sometimes FREE vaccinations check this out: 7 Surefire Ways to Get Cheaper Dog Shots.

Side Effects & Risks of DHLPP

Like with all vaccinations, your dog may experience some negative side effects and potential health risks. Don’t let this deter you from getting your puppy the proper vaccinations. The risks of not getting dogs their recommended shots (such as DHLPP) far outweigh the side effects from inoculation.

According to Dr. Ronald Schultz of the University of Wisconsin College of Veterinary Medicine, some common side effects and reactions of dog vaccinations may occur.

In some cases, your dog may experience Anaphylaxis – a rare and life threatening reaction to something ingested by or injected into your dog.

Schultz estimates that this event occurs roughly once every 15,000 times of administering dog vaccines, whether it be the Rabies, Bordetella, DHLPP or other important vaccinations.

An anaphylactic reaction can occur almost immediately after DHLPP administration, usually within minutes to hours post-inoculation (under 24 hours).

If you do not seek immediate medical attention for your dog, it will result in shock, respiratory and cardiac failure, and eventually death.

Anaphylaxis is more commonly seen in ‘killed vaccines,’ such as Leptospirosis, which is a non-core component of the DHLPP vaccination. This means it’s necessary to pay close attention to your dog after they receive their DHLPP.

The Distemper vaccine (DHLPP) is most commonly responsible for the cause of neurologic disease, a negative reaction that can develop inflammation of the dog’s brain. With such a disease, symptoms can include seizures, head tilt, tremors or blindness.

Another component of DHLPP is the Adenovirus Type-1 vaccine. This specific vaccine is known to cause allergic uveitis, which is the inflammation of the eye.

This is often called “blue eye” because of a noticeable blue-ish membrane covering the eye. Because of this reaction, many veterinarians have opted to use Adenovirus Type-2 in this vaccine to prevent the development of blue eye in dogs.

Steps to Take After the DHLPP Shot 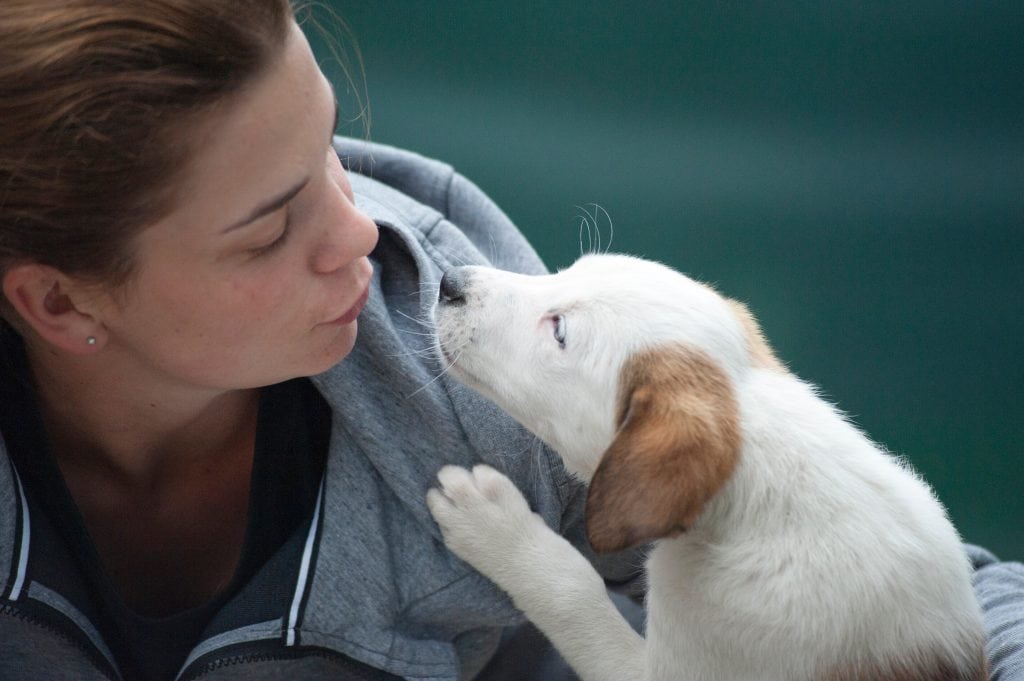 The most important thing to do after your dog (especially puppy) receives the DHLPP shot is to monitor them closely for any negative reactions for at least the following 48 hours. To be safe, keep a close eye on them for the next few days if possible.

Always consult with your veterinarian immediately if you see any side effects or negative reactions with your dog. Sometimes side effects can worsen or lead to something more severe.

According to Dr. Jennifer Costello, just because a dog has never reacted to a specific vaccine, doesn’t mean they won’t in the future with DHLPP boosters.

Tracey J is a licensed vet tech. With over 5 years of veterinary technician experience, she's dedicated her life and career to dogs. When she's not studying or working, she's taking care of her Mini Australian Shepherd - Olympus!