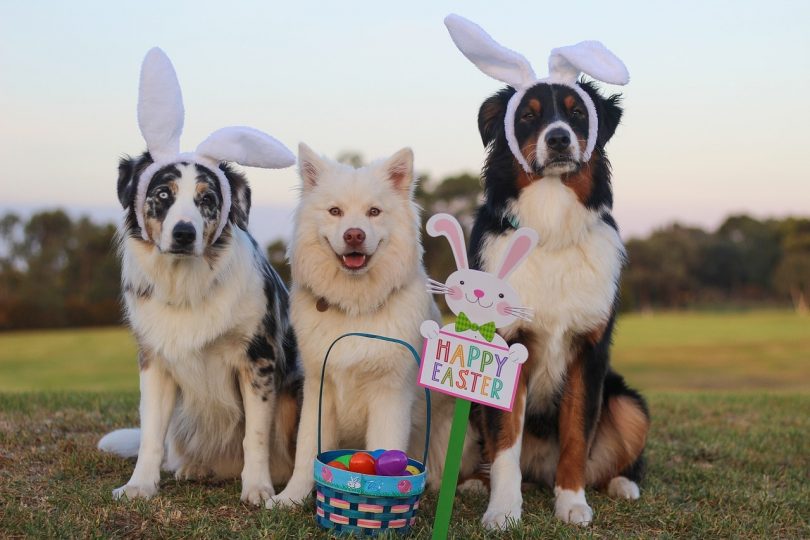 One of the best additions to a household family is a companion dog. They provide kids with tons of entertainment and play, all while teaching them all types of valuable life lessons. Australian Shepherds are generally great dogs, but what about with children?

So, are Australian Shepherds good with kids? There are mixed reviews, but Australian Shepherds are generally great playmates for older children. However, they’re known to try to herd small children by nipping at their heels. Still, with the right training and socialization, it can be avoided.

They’re good natured dogs that loves nothing more than the family, including the children. But let’s examine what makes these herding dogs great for kids, along with things parents should be aware of.

We think Aussies are great with children, but don’t take our word for it. We’ve compiled a list of 10 real owners, along with their experience and recommendations when it comes to children and Aussies.

Some of these answers have been edited for better grammar and writing style. However, the meaning and overall intent remain the same. Most of these answers are curated from the Aussie SubReddit.

Here’s what these owners had to say about their dog with kids:

1. Tambamamba says “My Aussie Herds Kids” – My Australian Shepherd is a wonderful dog in almost every way possible. However, his behavior towards children, especially when they’re running is getting serious. This happens at dog parks with lots of children and it’s getting to the point where we have to put a muzzle on him.

3. Andrbrow says “Kids love him” – I brought home my little Australian Shepherd pup for the family. So far, my wife and four kids were completely surprised and absolutely love him so much already.

4. Razhafoshza says “My guardian growing up” – I love this dog breed [Australian Shepherd]. My family owned an Aussie when I was a kid and he was both my guardian and best friend growing up.

6. Zucco22 says “Nipped small kids” – When my Aussie Hazel was a puppy, she’d try to herd me and my wife. The only time we saw her nip was when she was running around with kids in the backyard and trying to herd them. She ended up nipping one of the smaller children on the ankle. Plus, she’ll try to herd other dogs at the park.

8. Adbaca says “barks at kids” – My Australian Shepherd has started barking at kids. She won’t bark at every one, just some. Don’t think it’s an aggressive bark, but rather a protective bark. Still, it scares the kids.

9. Klaakso718 says “keeps an eye on kids” – My Australian Shepherd is another set of eyes for me. She’s protective and always keeps an eye on the children.

10. Zuccherina says “He plays great”- Our Aussie is very socialized. Our family lives near piers, so we often take him walking amongst other people and dogs quite regularly. He also plays great with our nephews/nieces, who all vary in age.

For more information on this dog’s temperament and personality, check out our Australian Shepherd Temperament & Personality Guide here.

Stop an Aussie From Herding Kids

Some reviews are good, while others…not so much. The most common problem (or bad habit) mentioned by parents is that their Aussies will try to herd the children.

Originally bred to be skilled herding dogs, Australian Shepherds have these instincts from birth. It can’t be helped early on in their puppy years.

However, there are ways to train them to “respect” children and prevent a potentially bad experience between kids and the dog from happening. Here’s what you should do if your Aussie tries to herd your kids.

The best thing you can do for your Australian Shepherd is socialization training. This means exposing them to kids of various age groups as early on as possible.

Make sure you frequently let them play with children – the more often the better. But always remember that you should be supervising the playing, especially if your dog is still learning how to play with children.

Without supervision, they may continue trying to herd the kids and will never learn otherwise. If no one corrects your dog, then the behavior will only be reinforced with more play time.

In the beginning, Australian Shepherds will likely try to establish some sort of dominance over these kids. If they successfully do so, it could lead to potential “attacks” and more herding in the future.

Socialization training helps them realize that children are to be played with and not herded. When they’ve grasped this concept, they will make some of the best companion dogs for your children.

By now you’ve most likely heard about how energetic these dogs can be. They’re hyperactive dogs with what seems like unlimited energy.

The bad news is, this excitement can potentially scare or hurt a child. Sometimes these dogs can unintentionally hurt a kid by jumping or running.

With that said, the best time to introduce your Australian Shepherd to children is after a good exercise session. This period of time is when they’re the least active and can approach children with a calmer demeanor.

Begin your socialization training after a frisbee or catch session and a long walk around the neighborhood. On the contrary, the worst time for training would be after your dog has been kept enclosed for a long period of time.

These dogs will have a lot of pent up energy that could lead to destructive or erratic behavior.

In addition, lots of physical activity for an Aussie will help stimulate their minds. Exercise can help divert their attention and herding instincts to other things.

One of the most basic commands for dogs is “leave it.” `When successfully taught, this command tells your dog to essentially move away from an object (or person) and leave it alone.

If you start socialization training and your Australian Shepherd starts to play rough with the kids, tell them to “leave it.” It’s a good way to show dogs that they’re not allowed to exhibit bad behavior around children.

So how do you teach your dog this command? First, you’ll want to put a delicious treat in your enclosed fist so that they’re not able to get to it.

They’ll scratch and paw at it, but with no success. As soon as they stop, give them positive reinforcement cue, such as a clicker sound or “yes!”

Next, as soon as your dog notices the treat in your hand, give them the cue “leave it.” When they’ve given up, reward them with the treat and positive reinforcement. Repeat as necessary.

After a few repetitions, you can try again with your palms open, exposing the treat. If they go for it, close your palm and start over with the cue. If you’re successful, place the treat in front of you (fully exposed) and begin the process once again.

For more a more detailed approach to this training, check out this guide by the American Kennel Club.

Yes, you read that right: train the children on how to react to your Australian Shepherd. Helping your kids establish dominance over your dog requires some effort on their part. They need to know how to react to the dog in certain situations.

If your dog is trying to bullying your kid, such as nipping or herding, they need to stand their ground firmly. Teach your kids to firmly tell them NO when they are misbehaving.

Aussies are generally smart enough to understand the tone of a person’s voice to determine if they are sad, angry or happy. Ask them to tell them “no” with confidence.

Let your kids know that they should never run away from the dog. This act will be reinforce the idea of the kids being lower on the pack hierarchy. As a result, it could lead to more chasing, herding or nipping.

This may be hard for the kids as they may get scared at times. Still, they should learn this and try it to the best of their abilities.

5. Make Sure Kids are Old Enough

Needless to say, kids can be too young to play with dogs – especially with an active working dog like the Aussie. And by young kids, I mean toddlers or small children. Even with supervision, it’s a bit risky exposing them to an untrained Australian Shepherd.

Plus, if your children are not old enough to stand up for themselves, it will be a difficult socialization session. A lot of things can go wrong. And the worst case scenario: they get seriously injured.

Small children can be rough on a young Aussie puppy too. Kids must be old enough to learn how to respect the dog. I’ve personally witnessed rowdy kids trying to ride small dogs and tug on their ears and/or tails.

For small or young dogs, this can be a traumatizing experience for them.

And as a result, can lead to them exhibiting more aggressive behavior towards kids in the future. Educate children on how to properly handle your Aussie and how to respect them.

Unfortunately, younger children may not be able to comprehend this at an early age. If thats the case, it’s best to wait a while longer.