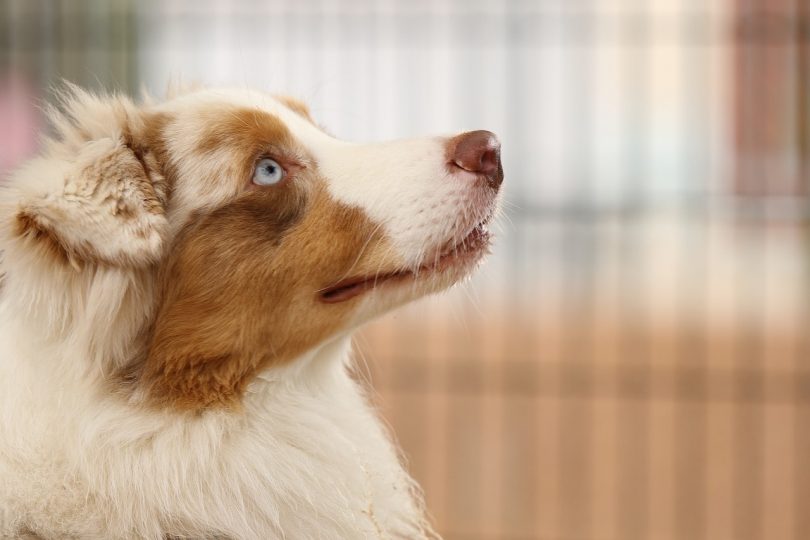 If you’re still debating on keeping an Australian Shepherd, research is very important. Most people already know that Aussies are lively, energetic and hard-working. But how do their intelligence compare to other breeds?

Australian Shepherds are smart. But Coren’s intelligence test isn’t a good indicator of their true IQ. To understand why Aussies were ranked so low, we must first understand how Coren measured dog intelligence.

Stanley Coren is a pHD and canine psychologist from the University of British Columbia. With the help of 199 obedience trial judges from North America, he had hundreds of dog breeds tested based off his criteria.

Coren’s criteria tested these dogs on two things: obedience and ability to learn.Though the criteria was met with criticism, it’s still the standard we have for measuring obedience and working intelligence.

Stanley Coren based his trials off these two criteria:

Although Coren tested hundred on breeds, not every breed qualified for his final list of dog intelligence rankings. Only breed with at least 100 responses were qualified.

Furthermore, only dog breeds that were recognized by the American and/or the Canadian Kennel Club were tested in the trials. As it turns out, Australian Shepherds were popular enough to be tested at least 100 times and recognized by both clubs.

As mentioned, Aussies were the 66th smartest dog breed out of 138 qualifying breeds. And while that’s not exactly “spectacular,” it’s better than most dog breeds.

Consequently, Australian Shepherds were classified as “average intelligent dogs.” This meant that they’re able to learn a new command with just 25 to 40 repetitions.

In addition, Australian Shepherds obeyed a known command on the first attempt just 50% (or better) of the time. These numbers are pretty typical. Plus, there’s really nothing wrong with being average.

In actuality, some of the most popular dog breeds are in this intelligence class. It’s not a coincidence. For example, the Dachshund, Boxer, Great Dane, Shiba Inu, Havanese and the Boston Terrier are all “average.” Not bad company at all.

Australian Shepherds didn’t do too bad. But how do they stack up against some of the world’s most intelligent dog breeds?

Conveniently, the “smartest dog” category also happen to be the top 10 performing breeds. These dogs can learn a new command with fewer than 5 repetitions. This means they’re at least 5 times faster at learning commands than Aussies.

These dogs are also able to obey a known command (on the first attempt) 95% or better of the time. Not only are they incredibly quick learners, but they’re super obedient too!

The smartest dogs are your all-time most popular breeds. For reference, these include the Golden Retriever, Labrador Retriever, German Shepherd, Dobermann and the Poodle.

Is Your Australian Shepherd Smart?

In order to really gauge how smart Australian Shepherds are, we surveyed 10 real Aussie owners on the popular Aussie Subreddit and other dog forums. Of course, not all individual dogs will be equal in intelligence. Here’s what they had to say to this question:

1. Nothinginparticular says Yes: “Mine is super smart in that she’s easily trainable, knows how to get what she wants, very expressive and communicative. Also a big ditzy goofball who runs into stuff and hits her head a lot.“

2. Emgerly says Mixed: “We call mine the ‘smartest idiot you’ll ever meet.’ He knows so many tricks and listens to commands so well, but fake throw a ball and he goes running EVERY TIME. One time he even jumped up on my desk and couldn’t figure out how to get back down the way he came.“

3. Squanchyfetuss says Yes: “Mine was potty trained at 8 weeks. Probably the smartest boy ever. Maybe five or less accidents in 2 years since he was 8 weeks old…he’s great off leash because he walks right next to me. Best dog I’ve had.“

4. Forest1000 says Yes: “My Lexus is too smart for her own good, most of the time. She “talks” to my kids on Face Time and will perform commands over FT. She’s learned the sound for Skype and FT calls.“

5. Adeniumesper says No: “Is anyone else’s Aussie…dumb? I got him fully expecting this intelligent being, but my god. He’s so ditzy and goofy! Wouldn’t trade him for anything but goodness.“

6. Carmen315 says Yes: “Mine is so smart and so athletic but she cannot catch anything you throw to her even if her life depended on it.”

7. Winsomedimsum says Mixed: “Yeah mine is probably about as sharp as a dull 4 year old human. She’ll shake your hand and she’ll play dead if you pretend to shoot her, but she’s also scared of random objects like blankets and shadows.”

8. Schlepenheimer says Yes: “I’ve owned..two Aussies. My Aussies have been very trainable and intelligent, but they know how to relax as well, and really seemed to love ALL people and other dogs.“

9. Becca723 says Yes: “She’s adorable. She’s incredibly smart and loves to learn tricks. My Aussie does every thing she can to make me happy. She loooooves to cuddle.“

10. Riansettles says Yes: “Full of life these dogs are. Unlimited energy. So smart also. Sometimes we wish we bought a dumb dog. Lol. Kidding of course. Love all Aussies.“

Why Aussies Rank Low for Intelligence

Obviously, Coren’s trials are flawed. Although I think it’s a great reference point, it doesn’t truly capture a dog’s intelligence. Obedience & working intelligence just happens to be the most objective way of measuring IQ.

So despite so many real owners claiming their Aussie to be very intelligent, why did they rank so low on his list? There are a number of reasons, but let’s discuss the main issue.

Stanley Coren conducted his intelligence test based off two very specific criteria. The first was based on how quickly a dog can learn a new command. The second criterion was the percentage that the dog will obey the command on the first try.

For these reasons, creating a standardized test based on Coren’s criteria can really skew results. And if you think about it, his “intelligence test” is really more of an obedience test.

But just because your Australian Shepherd doesn’t obey the first time around, doesn’t mean they don’t understand what you were saying. Aussies just aren’t as biddable as other dog breeds.

It’s no secret that Australian Shepherds are ultra-energetic and hyper dogs. Plus, they love to have fun. Give them a large backyard and you can expect them to run and play for hours at a time.

So because of their temperament and personality, Aussies probably can’t stand being still and going through hours of obedience tests. With that in mind, can you really be surprised they performed so poorly on the trial tests?

I know Australian Shepherds are high energy. But i cant even get dressed in the morning without her bouncing up and down like a pogo stick and biting my clothes.

Like we mentioned, Australian Shepherds have different motivators than other dogs. They’re not necessarily disobedient or unfaithful dogs either – they just won’t do everything you want! You can call them free-spirited dogs.

Some dog breeds like the Border Collie (the “smartest” dog) do extremely well because they enjoy working for the sake of working. Although Australian Shepherds are hardworking too, they need to be assigned to a “job” while being mentally stimulated.

Why Australian Shepherds Are Smart

So far, we’ve only discussed obedience and working intelligence. However, there’s so much more to dog IQ than just this, according to Stanley Coren.

In fact, Coren suggests that there are actually three dimensions of dog intelligence. The two others are adaptive and instinctive intelligence.

In my opinion, both of those are more important in calculating true dog IQ. It’s just that those two components of IQ are the hardest to objectively measure. Let me explain.

As you may already know, Australian Shepherds may not be the most “biddable” dogs. And as we discussed, this doesn’t mean they’re dumb (or even average intelligent) dogs.

However, there are other areas of dog expertise that Australian Shepherds truly excel at. Instinctive intelligence refers to the ability or special skill the dog breed was originally developed for. Nearly all modern dogs were purpose-bred.

Australian Shepherds were bred for herding small cattle, goats and sheep. In fact, they’re some of the best herders in the world! They herd by nipping at the heels of the animal and you’ll often notice these instincts in the home.

My Australian Shepherd is from a versatility line and he’s great normally. But when he gets excited or if i move quickly, he will try jogging alongside and nip at my heels.

Their ability to round up livestock, push them into formation and drive them in directions requires a special type of intelligence, that is, instinctive intelligence. All this, happens with little to no human training. Aussies were born with this ability.

Give them a herding job and they’ll thrive at it. However, not all Aussies will be excellent from the start. Those use these dogs to herd say they’re the best at herding cattles. On the other hand, Border Collies are known to be best at herding sheep.

So we’ve been trying to train our 13 week old Aussie with a bell hanging on the back door to ring when she wants to go out to potty. The puppy will now take advantage by ringing the bell to go outside to play.

The Aussie owner continues by saying, “He’s too smart for his own good.” Surely, that’s how many Australian Shepherds feel too! Learning and taking advantage of the situation is undeniably high adaptive intelligence.

Similarly, another owner tells us about his intelligent Australian Shepherd:

I feel like my 10 month old Aussie has already learned the city streets. He gets excited every time we go to the dog park. And just by observing the neighborhood in the car, he’s started to get excited 5 minutes before we even arrive!

These are all great stories that show high adaptive intelligence within Aussies. And even though it’s just two stories that we shared, there are a lot more. We could continue, but the list probably would never end!

If you’re not convinced, just ask any Australian Shepherd owner. I’m positive they’ll have plenty of stories just like these.

Does the Aussie’s Intelligence Matter?

Just like all dog breeds, not all Australian Shepherds may be highly intelligent. But does it really matter if they are?

The truth is, your Australian Shepherd really doesn’t need to be that smart. Nearly all dogs are smart enough to provide what most owners need, especially if you’re just looking for a companion dog.

The most important thing is that your Aussie is loving and affectionate. Instead, ask: are Australian Shepherds a good match for me (my family) and my personality?

Unless you plan on teaching your dog important complicated tasks, then it’s pointless to have a breed like a German Shepherd, Poodle or Border Collie (the top 3 breeds for canine intelligence).

Rather than focusing on a dog intelligence list published by the “experts,” it’s far better to focus on developing a dog for your own specific needs. There’s a lot of things that Aussies are highly capable of doing.