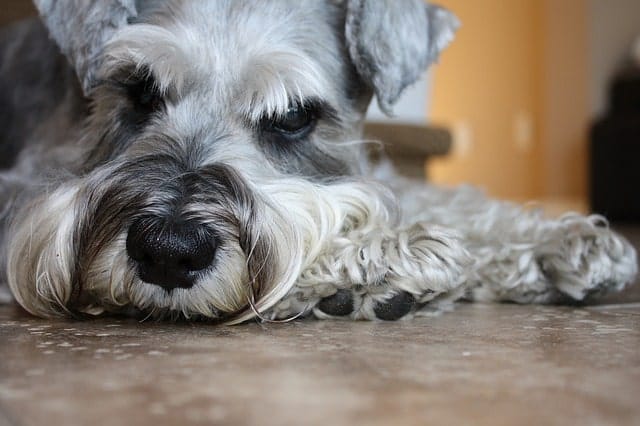 The Schnauzer dogs are some of the most iconic dog breeds to come out of Germany. And like the Poodle, they come in three size variations: miniature, standard and giant. All of which, are individually unique in work ethics, obedience and temperament.

But, are Schnauzers smart dogs? All three size variations of Schnauzers are very intelligent. Both the Miniature and Standard Schnauzers are categorized as “bright dogs,” ranking 12th and 22nd respectively. However, Giant Schnauzers are “above average” in work & obedience intelligence, ranking 35 out of 138 breeds.

All Schnauzers rank impressively high for canine intelligence. There’s no doubting the IQ of the schnauzer group. But what actually makes them intelligent dogs? Let’s examine the method of measuring dog intelligence and other factors of IQ.

All three variations of the Schnauzer are in the top 40 for dog intelligence. While this may seem impressive (and it is!), how did we come to this conclusion and how is dog IQ measured? After all, we didn’t arbitrarily come up with this ranking.

The current list of smartest dog breeds has been largely credited to famed canine psychologist, Stanley Coren. Back in 1994, Coren contacted 199 North American obedience trial judges to help in his studies. The consequent response was phenomenal.

With Coren’s criteria, the obedience trial judges evaluated and ranked as many dog breeds as they could get their hands on. With that said, only dogs from the AKC and CKC participated.

His studies and ultimately intelligence rankings are based on the following:

There are a lot of dog breeds in the world. Many of which, are relatively rare. For this reason, not all dog breeds had enough data on work and obedience intelligence. In fact, only breeds with at least 100 evaluations qualified from Coren’s final intelligence list.

In addition, no mixed dog breeds participated in the trials. The good news is that all schnauzer types were popular to receive enough “test subjects.” Plus, they’ve been a recognized purebred dogs with the AKC since the 19th century.

Given Stanley Coren’s test criteria, here’s how each schnauzer variation did.

The Miniature Schnauzer is the smallest of the three Schnauzer variations. They’re roughly 11 to 14 inches tall and 10 – 15 pounds in weight. However, just because they have a “smaller brain” doesn’t mean they’re less intelligent.

In fact, out of the three Schnauzer size variations, the Miniature Schnauzer performed the best. As a result, they’re ranked the 12th smartest dog breed out of 138 qualifying breeds.

But what does this really mean? Miniature Schnauzers were placed in the “bright dogs” group. Dog breeds in this class are able to learn a new command with just 5 to 15 repetitions, which means they’re capable of learning a new command in 30 minutes!

What’s even more impressive is that Miniature Schnauzers will obey a known command (on the first attempt) with an 85% or better success rate. Not only are they quick learners, but they’re some of the most obedient dogs in the world!

While it may seem like they’re well below the miniature, standards are actually in the same dog intelligence class. In other words, they learn commands roughly as quick as the mini. Plus, a Standard will be just as obedient.

There are a ton of popular dog breeds in the same intelligence class as the Mini and Standard Schnauzers. For example, the class includes both Welsh Corgis, Cocker Spaniel, Bernese Mountain Dog, Pomeranian, Collie and many more.

The Giant Schnauzer, as you may have guessed, is both the largest and least intelligent of the three sizes. Weighing in at 60 to 80 pounds and towering up to 28 inches tall at the shoulder, these dogs are huge, and there’s no denying it.

Though they’re ranked the 35th smartest dog breed, they’re not far behind the Miniature and Standard variation. In reality, Giant Schnauzers are just one intelligence class below –  listed as “above average intelligent dogs.”

In terms of learning and obedience, they’re not far behind either. The Giant Schnauzer is able to learn a new command with just 15 to 25 repetitions. Plus, they’re also able to obey a known command 70% (or better) of the time.

And for reference, Giant Schnauzers are classed with Dalmatians, Yorkies, Samoyeds, Irish Setters – among other popular dog breeds. Being above-average is great, and it’s nothing to scoff at in the canine kingdom.

Other Reasons Why Schnauzers Are Smart

When it comes to obedience and working intelligence, all Schnauzers score very well. But this one dimension, unfortunately, is not the only component of canine intelligence. Even Stanley Coren admits there’s more to true dog IQ.

For example, if a Schnauzer doesn’t obey or want to learn a command, it doesn’t mean the dog isn’t smart. Just because they don’t obey you, doesn’t mean they don’t understand. Many dog breeds are stubborn, independent and/or free-spirited.

With that said, there are three dimensions of dog intelligence. The other two are instinctive and adaptive intelligence. Both of which, are equally, if not more important than obedience & working intelligence.

However, obedience & working intelligence is the most objective. It’s the one component that we can actually quantify to create the list of “smartest” dog breeds. Still, it’s important to know and understand the other factors contributing to dog IQ.

Instinctive intelligence refers to the innate ability or skill that the dog was bred for. Back in the old days, people bred dogs for certain jobs or roles in society. Whether it’s to move livestock or guard the farm, each dog had a specific working purpose.

For example, Australian Shepherds are some of the best herding dogs in the world. Even with little to no human training and intervention, they’ll instinctively know how to round up livestock and drive them towards a direction.

The Mini Schnauzer was originally bred down in size from its larger cousin, the Standard. As such, they were bred to be hunt down rats and other vermin. These little dogs were some of the best ratters in the business.

They aren’t used as ratters anymore. But they still retain the lively and mischievous personality that made them such great ratters back in the day. In addition, it’s not unusual to see the prey-instincts and drive come up during play.

So when you bring a Mini Schnauzer into the home, don’t be surprised if they start to chase a running squirrel. After all, these little dog’s instinctive intelligence is the ability to efficiently track and hunt down pesty vermin.

The Standard Schnauzer may have the highest instinctive intelligence out of the three. That’s because they were bred for many things, making them some of the most versatile working dogs you can find! They really did it all.

In the Middle Ages, the Standard Schnauzers were first developed to serve as multi-purpose farm dogs. That said, they were developed for various farm tasks, such as herding, ratting, guarding, hunting among other things.

The Standard Schnauzer’s instinctive intelligence needed to be high in order to be skilled at so many jobs and roles. This would explain things if your Standard starts herding and chasing prey all within the same day. Remember – it’s instincts!

The Giant Schnauzer is the biggest size variation of the three. They were actually bred up from the standard to create a sturdier and stronger dog. Though they’re still Schnauzers, they served different purposes than the others.

Similar to herding dogs, the Giant Schnauzers were bred to drive cattle from the local farms to the markets. It’s not exactly herding, but close to it. But because they’re so big, loyal and trainable, Giants were ideal for the job.

Today, Giant Schnauzers mainly serve as guard dogs or an integral part of the K9 police force all around the world. They’ll have some protective instincts ingrained in them, but their ability to move livestock is what makes them instinctively smart.

Fortunately, we see this in all types of Schnauzers. As you may have guessed, this is extremely difficult to measure because it’s rather abstract. So, we’ve asked Schnauzer owners to share stories about their dog that hints at high adaptive intelligence.

One owner tells us about her Giant Schnauzer:

A Giant Schnauzer quickly learns to differentiate between strangers and friends, or those who visit your home frequently. They greet the latter folks graciously once in your home.

Giant Schnauzers are guard dogs, so the ability to recognize friendly people is crucial. But at the same time, the ability to learn how to differentiate people based on certain situations and cues is a sign of high adaptive intelligence.

Regarding her Miniature Schnauzer, this owner says:

My Mini actually learned how to open the handle of my office door. He just lunges at the handle, pulls it down and the forward force opens the door. Amazing, but scary.

This Miniature has probably seen the owner pull down the handle to open doors many, many times. Because his dog was able to learn from previous experiences, he likely possesses high adaptive intelligence.

Of course, these are just a couple anecdotes of Schnauzers with high adaptive intelligence. But the reality is, if you asked any Schnauzer owner, they would most likely be able to tell you many similar stories that points to high adaptive IQ.

Problems With a Smart Schnauzer

Owning a smart dog breed isn’t for everyone. In fact, many owners will tell you that it’s much harder taking care of an intelligent dog breed. Higher intelligent dogs, such as Schnauzers, means that they’ll have more needs.

In addition to grooming, exercise, diet and the basics, smarter dogs tend to need more mental stimulation. Because they’re more intelligent, they get bored easier. Without it, you will most likely experience a dog with destructive behavior.

But what is mental stimulation and how do you provide enough for your Schnauzer? It is, for the most part, obedience training. But because few people have enough time to spend 1-2 hours with obedience, we suggest getting dog puzzles or smart toys.

Here are just a few of my dog’s favorite puzzles that’ll keep your dog occupied and their brains sharp. We own intelligent breeds too, so we understand the struggle!

The first toy is the Outward Hound Hide n’ Seek Plush Toy. It’s a plush toy where you can hide your choice of stuffed animals (squirrels, bees, birds, etc.).

Your dog will need to figure out how to get these dogs out of their homes. It’s highly interactive and my Australian Shepherd absolutely loves this. Check it out here at Amazon.com.

Another favorite my dogs love is the Nina Ottosson Dog Puzzle. It comes in three variations but I went with the Hide n Slide because it looks the most “complex.” Hide your Schnauzer’s favorite treats in this and you’ll have them occupied for a while.

They’ll need to learn how to push the sliders to find the treats. But chances are, a Schnauzer might be able to figure this out quickly. If you’re interested, check it out here at Amazon.

You don’t have to go with one of my suggestions, as there are plenty of great toys you can find all over Amazon. However, these are the dog toys that I’ve personally tried with my own dogs and can actually vouch for.

The point is to get your Schnauzer something to deal with their high intelligence and demand for mental stimulation. The last thing you’ll want is for your Schnauzer to be unhappy because of the lack of mental activities in life.