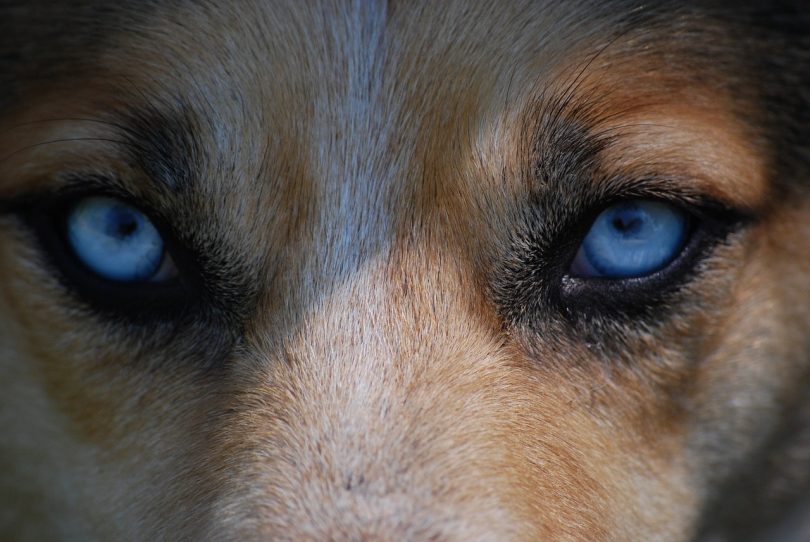 Rare and mysterious, the gaze of a blue-eyed dog tends to make an impression. However, few breeds display this unique trait. And even within those breeds, blue eyes can be hard to come by.

The reasons for a dog having blue eyes are all up to their genes. However, different breeds will have different genes that code for blue eyes. Some inherit them as a recessive trait, and others as a mutation of other genes.

In any case, blue eyes are much less common than darker shades, with brown being the most common color among dog breeds.

Not every dog of these specific breeds have blue eyes. However, blue eyes have been seen in these dog breeds – some more common than others.

While far from the only blue-eyed dog breed, Siberian Huskies are likely the first that comes to anyone’s mind. Though they can also have brown eyes, the ones with ice-blue eyes are unforgettable. And then there are some that have one brown eye and one blue.

According to researchers, a gene mutation is the culprit for these iconic blue colored eyes in Siberian Huskies. Specifically, a gene known as the ALX4 (on chromosome 18) is linked with the development of these stunning blue eyes.

Bred in the frozen lands of northern Russia by the Chukchi people, it is as though you can see their past reflected in their eyes, full of snow and winter winds. If there were an ambassador for blue-eyed dog breeds, it would be the Siberian Husky.

This breed receives its blue eyes as a package deal with the same gene that results in a merle (that is, splotchy) coat. This combination gives them an air of being free-spirited and a little on the wild side (in a good way, of course).

However, Aussie Shepherds are incredibly clever and are much more likely to impose order rather than chaos. Their history as herding dogs gives them a penchant for keeping their friends and owners in line.

But they still make great companions with a readiness to learn that is nearly unrivaled among dog breeds. Their smaller size hides a dog with bounds of energy and liveliness that loves to spend time with their owners.

Another herding breed, Border Collie’s deserve a mention on this list. Like Australian Shepherds, their blue eyes are tied to their merle patterning. The dilution of pigment in their coat means that there is a chance that eye pigment will turn out lighter as well.

This breed has a history that goes back to the British Isles, where they served as herding dogs. Over the years, successful breeding has led them to become one of the most intelligent dog breeds around.

Some say they are actually the smartest dogs out there. Needless to say, a lazy lifestyle won’t suit them. They need plenty of physical and mental exercise to keep them healthy and happy.

Whether blue or brown, Dachshunds have undeniable “puppy-eyes,” that can melt your heart with a single look. You know the one we’re talking about.

And if they have dappled or merle patterning, there is also a chance that they’ll be looking up at you with blue-tinted eyes.

This short yet long dog was originally bred in Germany to hunt badgers and other burrowing animals. Their unique shape makes them perfect for following their quarry down holes.

However, nowadays they are less likely to hunt rabbits and more likely to sit on your lap, content to be next to a warm human rather than down a dark hole.

At first glance, a Welsh Corgi looks almost comic with their short legs and long bodies. But you might be surprised at how agile and athletic they can be. What’s even more surprising is how intelligent these dogs really are.

They were bred for farm work, which included herding livestock, so they’ve got plenty of power in their little bodies. In fact, their shorter stature came in handy for weaving around and between cattle back in the day.

Like most blue-eyed dogs, their eye coloring is tied to merle coloring, specifically blue merle. It’s also worth noting that even some Pembroke Welsh Corgis can develop blue eyes on very rare occasions.

Corgis are an internet favorite, and for good reason. They exhibit a readiness to please and a positive attitude that finds them friends all over.

Though the Weimaraner isn’t a breed that usually comes up in casual conversation or Instagram photos, they are a gorgeous breed with a history of serving alongside royalty on hunts for boar, deer, and even bears!

Its sleek, silvery coloring and lithe body have appropriately earned it the nickname “Gray Ghost.” Though plenty of Weimaraners may appear blue-eyed at birth, as they age they will begin to produce more melanin, the pigment which lends color to their eyes.

While some may retain a blue-gray appearance throughout their life, others will slowly meld into warmer colors such as amber or gold.

Regardless of how their eyes turn out, there is no denying that this is one spectacular and highly intelligent underrated dog breed that deserves more attention.

Finding a blue-eyed German Shepherd can be tough. The vast majority have brown eyes, which comes from a dominant gene. The gene for blue-eyes is recessive and rarely makes an appearance.

However, when it does you are in for a treat. The blue coloring along with their regal and stern features is a memorable combination.

Oddly enough, many professional breeders see the trait as a fault, instead favoring coats and coloring more in line with industry “standards,” such as those set by the American Kennel Club.

But this shouldn’t stand in the way of owners looking to make a unique-looking German Shepherd friend. For the usual owner, it is all about personal taste rather than a book of rules when it comes to finding a canine companion.

It seems herding dogs have a tendency toward blue eyes. The Shetland Sheepdog (or “Sheltie”) is the fifth herding breed on this list, after all.

Like the other breeds, blue-eyes occur in Shelties along with the merle gene. So if they are dappled, they are more likely to have lighter-eyes.

Being a herding dog, they are known for their intelligence and readiness to please. They are very people-oriented and feel best when raised in homes where there are plenty of people around.

If you have an often empty home, they might end up getting stressed out. Plus, they do great with other dogs and pets.

We’ve included this breed on the list partly because of how impressive they look, and partly as a warning. While, yes, a blue-eyed Dalmatian looks spectacular, it is important to know that this can be a warning sign for deafness.

Dalmatians already are more prone to deafness than other breeds, with 30% suffering from hearing loss in one or both ears. This appears to be connected to the same auto-recessive gene which affects the coloring of the iris.

So, we won’t advise one way or the other, but this tendency is something that should be taken into consideration when picking out a Dalmatian.

Some Pit Bull types have been known to exhibit blue eyes. Though not very common, blue eyed Pit Bulls have been popping up all over the country. Still, there is a large range of colors in Pit Bull eye color.

Some of the more common eye colors include shades of brown, yellow and even green in rare cases. We’ve even seen Pit Bulls with two different colored eyes (as seen in the picture above).

Unfortunately, blue eyes is not a standard for Pit Bulls. As a result, any blue-eyed Pit Bull will inevitably be disqualified from dog shows, according to the American Kennel Club.

Most Alaskan Malamutes have dark amber brown eyes. However, like their Husky cousin, they can also come in light blue eyes. Some have even seen Malamutes with one blue one brown eye.

Because the Malamute Husky mix are so popular, the Malamutes with blue eyes may have inherited it from a Husky somewhere along their bloodline.

The Alaskan Klee Kai is the much smaller cousin of the Alaskan Malamute or Siberian Husky. In some cases, they look nearly identical to their larger cousins.

Everything from the fluffiness, to the erect ears, coat colors and of course, the blue eyes are the same.

The Klee Kai’s eyes can range in the color blue – from a light sky blue to a deeper ocean blue. Most Klee Kai eyes are blue, however, they can also be brown or two colors (brown and blue).

In rare instances, Great Danes can have blue eyes too. Depending on the Great Dane coat color, some are more prone to developing blue eyes than others. For example, Harlequin Great Danes may develop blue eyes.

It’s also worth noting that some Great Dane puppies may start off with blue eyes. However, after a few months, the blue eyes disappear and they’re left with brown eyes. Only on rare occasions do the blue eyes stay into adulthood.

Still, blue-eyed Great Danes are truly a beautiful sight to see. Though many of them may experience certain health problems – typically with the eyes (such as partial blindness).

Although Boxers aren’t known for their sky blue eyes, it is possible in rare situations. The most common Boxer to show these colored eyes are white Boxers, which are rare as is.

It’s also common for puppy Boxers to have blue eyes, despite coat color. However, the vast majority of them develop brown eyes as they get older.

Rottweilers have an iconic look with their black and tan coat and brown eyes. However, did you know that blue eyed Rottweilers exist? It’s rare, but some Rotties have two blue eyes. In addition, you may even see these dogs with one blue and one brown eye.

Like many other dogs with blue eyes, the blue-eyed Rottie is not recognized by the American Kennel Club. But if you don’t plan on showing your Rottweiler in competitions, this doesn’t really matter.

There’s a good chance that many Rottweilers with blue eyes aren’t 100% pure. They may have had some mixes, possibly with a Husky, way back in their lineage.

While some breeds take their blue-eyes from specific genes for the color, others receive them because of the merle gene.

While a dog that has merle (or dappled, splotchy) patterning should be fine on its own, it should not be bred together with another merle dog.

This double-merle is associated with an increased risk in health problems for their offspring. Blindness and deafness are but a few of the possible effects of a double-merle breeding.

Plenty of breeders are responsible and have their dogs’ health in mind. However, with any desirable trait, there is an increased chance for irresponsible breeding if the breeder has money on the mind.

Rarity can increase the cost of a pup and breeders know this. So, it is important to make sure that your blue-eyed pup is not the result of breeding two merle dogs. Otherwise, as we mentioned, they will be at risk for health issues.

Blue-eyes can appear in almost any breed. It is simply the way genes work. There are so many factors that go into determining a dog’s appearance. All it takes is one mutation or change in their genes to produce unique results.

I wouldn’t recommend looking specifically for blue eyes. No matter if they’re blue, brown, yellow or green, all dogs are the same. They will love you unconditionally despite the colors of their eyes.