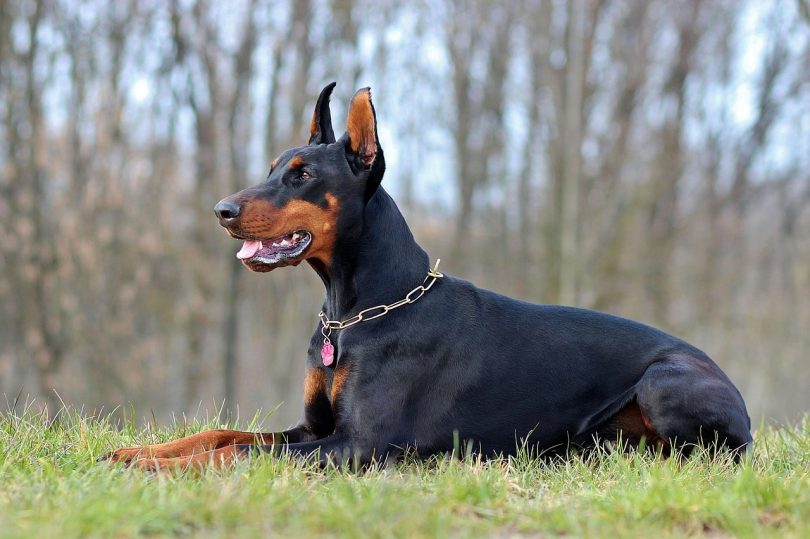 Hailing from Germany, the Doberman Pinscher is an iconic dog breed known for having both the brains and brawn. And because they’re such loyal and fearless dogs, Dobermans make some of the world’s best police dogs.

However, in a family environment, they’re an equally great watchdog and protector of the home. You can always count on a Doberman Pinscher to have your back. Plus, they’re a great second pair of eyes for your older children.

But if you’re thinking about getting a Doberman Pinscher, then you have some options you may want to consider. Contrary to popular belief, Dobermans come in more than their signature tan and black. In fact, they come in at least 9 beautiful colors!

Whether a color is “standard” or not doesn’t really matter for most owners. That is, unless you plan to show your dog or have them participate in AKC competitions. Otherwise, color is really just a preference and choice among owners.

That being said, the Doberman Pinscher only has 4 official standard colors as set by the American Kennel Club. Even so, AKC recognizes 5 different Doberman colors – including the elusive yet majestic White Doberman Pinscher.

Though some of these unique colors are extremely rare cases, we’ve managed to track them all down. Here are all nine possible colors of the Doberman Pinscher. Keep in mind, you may not be able to find all these colors despite your search.

The black and rust Doberman Pinscher is by far the most common color for these dogs. In fact, they’re the ones you imagine when you think of these dogs – often depicted in movies, comic books and mainstream media.

These Doberman Pinschers will have a slick black coat with tan highlights or markings near and around the face (muzzle), ears, eyebrows, legs, chest and sometimes below the tail. They are really the signature colors of this breed.

But due to the tan-like color, they’re sometimes referred to as the “black and tan” or “black and brown” Dobermans as well. With a healthy coat, the fur will be smooth and glossy with a deep contrast between the base color and marking highlights.

Of course, not all Doberman colors are officially recognized by the AKC. However, there’s not a single doubt the black and rust is part of the standard, given their immense popularity among this breed. They’re also the easiest colors to find.

With how popular the black and rust Doberman is, you would think that a solid black Doberman is popular too, right? Not exactly. Rather, Black Doberman Pinschers are rare because they’re considered “unethical” to breed.

These are also called “melanistic Dobermans” and refer specifically to solid black Doberman Pinschers without the traditional rust or tan markings. As you may have guessed, this color is not officially recognized and potential health problems may arise.

Some careless and or unprofessional breeders will breed for these colors and market them as “exclusive” or “rare” dogs for the sake of profit. Don’t buy into this lie. Many that breed for rare coats often ignore breeding for good health.

If you encounter a breeder that purposely breeds for this color, I would stay clear of the dealing with the breeder. Because they’re practicing unethical breeding procedures, you never know the quality or potential long-term health effects of their dogs.

The blue and rust Doberman is truly a beautiful sight to see. Though they’re not as common as their black and rust counterpart, they are definitely highly sought after. The subtle blue makes them a unique Dobe while maintaining AKC recognition

The reason for the “blue-ish” color is because they’ve inherited copies of the dilute recessive gene. Yes, the blue and rust Dobermans also have the genes for a black and rust Doberman. However, when you dilute black, you get this blue-ish gray color.

Many people often mistake this blue color for a slate gray or silver. As a result, this color variety of the Dobe has been unofficially called the gray Doberman as well.

The rust markings on top of the slate blue will have a much lower contrast than with a normal black. In actuality, the color looks like a charcoal gray, silver with a hint of purple. Though, this can vary among individual blue Dobermans.

A solid blue Doberman may be even more rare than a solid black Doberman. In fact, they may be the rarest among this breed. Likewise, they’re also unethical to breed due to the plethora of potential health issues.

Health issues related to the blue color may include: Von Willebrand Disease (or VWD), Color Dilution Alopecia and Cardiomyopathy. Some of which, can be serious and lead to severe health problems in the future.

For example, Color Dilution Alopecia, can happen to all blue dogs and not just blue Dobes. In fact, they’re quite common in blue French Bulldogs. This condition may lead to severe hair-loss, which will likely lead to skin infections or other nasty diseases.

Again, we don’t ever suggest keeping a blue Doberman, no matter how awesome they look. If you’re talking with a breeder that does breed these dogs, I would be very cautious doing business with them. But like I mentioned they’re super rare.

According to the AKC, the red and rust Doberman Pinscher is the second most popular color choice for these dogs. However, they’re still much less popular than the black and rust. Plus, a red and rust coat gives off an aura of mystery.

Though they’re called “red” Dobes, they’re really a dark reddish-brown. Many other people call them as they see it – referring to them as brown Dobermans. But no matter what you call them, you can deny that they’re gorgeous dogs!

The red and rust Dobermans will also have tan (rust) markings on the eyebrows, muzzle, ear, chest, legs, bottom and beneath the tail. Because the tan looks like a light brown, the contrast isn’t as “nice” and deep as with the black and rust.

Still, they’re very popular color choices and there are many owners that actually prefer this to the traditional black and rust Doberman. Personally, we think this color is more unique. And of course, this is a standard color and officially recognized by the AKC

Just like with other solid colored Dobermans, a solid red Doberman isn’t very common. That being said, they’re also not ethical to breed, as they can develop health issues just like any of the other melanistic Dobermans.

Although we don’t agree with the breeding of this color, they still exist in some rare cases. We had a real difficult time finding even a single picture of the solid Red Doberman. And some will consider red and rust with light markings as solid red.

Another name for the red Doberman is the chocolate Doberman. Because they’re pretty much a solid, all-around brown, this name makes a lot of sense. If anyone has more pictures of these dogs, feel free to send us a message!

While few have heard of the color, the fawn and rust Doberman is another color coat officially recognized by the American Kennel Club. Much like the blue and fawn, these special-colored dogs carry the recessive dilute genes.

The coat color still looks brown, but much less of the reddish undertone seen in the true reds. With the fawn, however, I like to compare them to a light milk chocolate.

Like many Dobermans, they’ll have tan markings around the ears, muzzle, chest, legs, bottom, eyebrows and under the tail. But we’ll admit – it’s a little difficult to see because the two colors are very similar and the contrast is very minimal.

I think by now you know the problems and concerns with Dobermans that do not have a typical tan or rust marking. The solid fawn Doberman is no exception. Health concerns are very real when it comes to a solid fawn Dobe.

In terms of rarity, they’re even more uncommon than the solid blue Doberman. But if we have learned anything, we know that unethical breeders will still attempt to breed these dogs to try to sell at a premium for this “exotic” look.

Don’t buy into the hype and fall for this tactic. Stay clear of breeders that tell you they breed these colors for their Dobermans. It’s one thing to unintentionally get one in a litter, but another to specifically breed for them.

And finally, we have the white Doberman – perhaps the most unique of them all. Though some are pure classic white, others have a cream white color instead. Either way, they’re classified as white Doberman Pinschers.

The white Doberman is the result of inbreeding, whether intentional or not. As a result, this practice has caused these dogs to come in albino – though not exactly. The correct term for this is actually “partial albino.”

This color is still very new. In fact, the first documented case of an albino Doberman appeared in 1976, when a Doberman named Sheba was born. Because of Sheba and a lot of inbreeding, we now have many other partial albino Dobermans in the world today.

Yes, they may look very cool, but you don’t really want a white Doberman. Not only can they develop many health issues, but they’ve been known to develop behavioral issues.

Health issues can include skin and eye problems. In addition, photosensitivity is a common problem with these dogs. And because many white Dobermans have poor eyesight, this can lead to behavioral issues.

When these dogs can’t really see the surrounding environment, they tend to develop anxiety easier, which may lead to aggressive behaviors and tendencies, such as biting. Because of all the issues, white colored Dobermans have been banned in several countries.

As a result, you can guess these dogs aren’t recognized by the American Kennel Club. And while this color hasn’t been officially banned in the United States, the AKC is doing what it can to discourage breeding white Dobermans.

So, which is your favorite color for the Doberman Pinscher? Let us know in the comments section below. If you already own a Doberman, feel free to let potential owners know what color Doberman you have and why you picked that color!