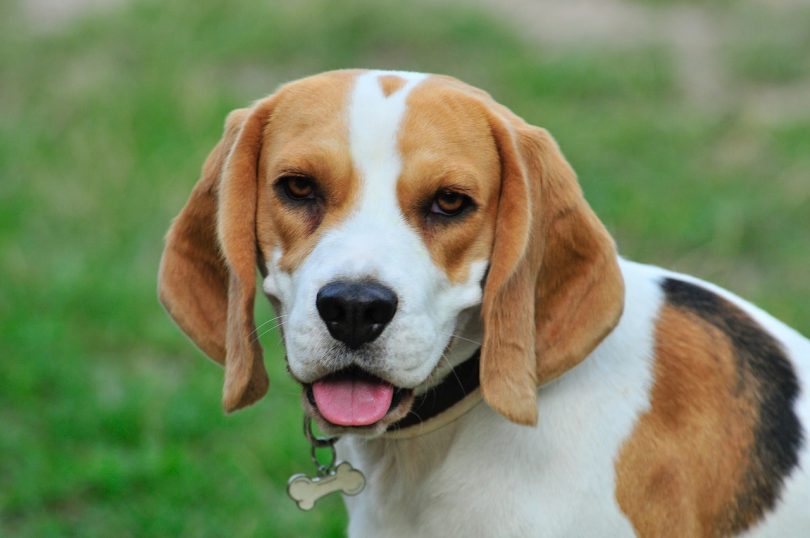 If you’re considering keeping a Beagle, you’ve likely done some research into the hound breed. You probably already know that they’re affectionate and friendly dogs with an incredible nose! But how about their intelligence compared to other dogs?

So, are Beagles smart? According to Stanley Coren, Beagles are the 131st smartest dogs. This puts them in the bottom 10 out of 138 breeds. However, this doesn’t mean Beagles are dumb dogs. Rather, Beagles have different motivators that don’t fit with the standardized test criteria that Coren developed.

If you know how Beagles operate, they’re actually incredibly intelligent dogs with a very specialized skillset. For example, they’re some of the best (if not the best) scent hounds in the world. Let’s examine why these dogs are smarter than you think.

Is Your Beagle Smart?

The best way to really gauge how smart Beagles are is by asking the owners – the people that engage and interact with these dogs on a daily basis.

So, we surveyed the popular Beagle Subreddit (and other dog forums) to ask real Beagle owners for answers to this question. Here’s what they had to say to the question.

1. Kissology says Yes: “One of my beagles is smart…too smart. He figured out how to open the refrigerator and has done it twice this week. I now have to get child safely locks for my refrigerator.”

2. Wampafleas says Yes: “Been there, my beagle is the reason I have child locks on the oven, refrigerator, dishwasher, and pantry. I actually had to put two locks on the dishwasher, because he figured out how to get the first one off.”

3. Theycallmemiriam says No: “My beagle Jasper tries, but he’s not super bright.“

4. Euro-canuk says Yes: “My beagle does basically the opposite of what i want her to do most of the time. But it’s not because she’s dumb, it’s because she’s smart enough to know she can get away with it and still do whatever she wants.”

5. Beaglescout15 says Yes: “My first beagle, Scout, was one of the most intelligent animals I’ve ever met. She figured out how to lure people away from their food far enough so that she could run back and grab it before the person could get there.“

6. M_trotsky says Mixed: “My beagle does what he is told and will listen to commands extremely well, so you would assume was smart… but he is not that intelligent!”

8. Northsidebill1 says Yes: “Be careful. Beagles are smart enough to fool their humans into thinking they are complete windowlickers. Mine had me fooled for a while and then I figured her out.”

9. Doxiewrangler says No: “She regularly forgets how to beagle and slams into walls, the sides of couches, the sliding glass door and her kennel multiple times a day. Its part of her charm, lol.”

10. Gmazing23 says Yes: “Okay, my 9 year old beagle, Joey, is fairly smart, at least from my family’s view. He can signal when he wants something specific by scratching, whining, or looking. He can tell when someone is feeling down, and loves everyone.”

11. Monica says Yes: “As a beagle owner I can tell you that beagles are very very smart dogs. My puppy can learn a new trick in 1 training session.”

12. Samantha says Yes: “I have had rough collies (like Lassie) and right now we have a border collie and a beagle. The beagle is By FAR the most intelligent dog I’ve ever owned.”

Though this survey is an extremely small sample size, we think it accurately captures the owners opinion on whether Beagles are smart. About 67% of the surveyed owners said their Beagle is smart.

You may have already seen the list of the least intelligent dog breeds and noticed the Beagle on that list. If not, you can check it out here.

But before you start making any assumptions about the Beagle, hear us out. How accurate is this smart breeds ranking conducted by famed psychologist Stanley Coren?

Though we think it’s a good starting point for measuring a dog’s intelligence, it doesn’t tell the whole story. There’s so much more to dog intelligence than just working & obedience. It’s why there are clear flaws with his test.

When it comes to dogs, it’s extremely difficult to create a “standardized” test to measure the intelligence of these animals. As we mentioned, different dog breeds have different motivators.

Some breeds, such as the Border Collie, will work for the sake of working. They live to work, whether it’s obedience tests or herding. However, this is not the case with all dog breeds – including the Beagle.

With that said, it’s important to understand the criteria in which Coren used for his trials:

To standardize a test based off these two criteria is not fair for many dog breeds. In reality, these trials seems more like an obedience test than an intelligence test.

Just because a dog doesn’t obey a known command doesn’t mean the dog doesn’t know what you’re saying. This is exactly the case with the Beagle. These dogs aren’t as biddable as other dog breeds.

Though Beagles can be affectionate and friendly, they are also curious and independent dogs. Not all Beagles will want to obey your commands “just because” you tell them to.

However, this doesn’t mean they’re not trainable – many owners claim they’re quite easy to train if done right. Beagles just value their own priorities over yours.

Primo, my Beagle doesn’t always listen…but really, I think he’s just always in his own world and will come out whenever he wants.

While they are affectionate and loyal with their owners, Beagles are also independent thinkers. In other words, their whole lives don’t revolve around the obedience training and following commands.

Again, this doesn’t mean Beagles don’t love you. They’re really loving dogs and love being with people. It’s just that Beagles are smart enough to think for themselves.

Why Beagles Are Smart

Dog intelligence is more than just obedience and work-ethic. However, that dimension of intelligence is the easiest to objectively measure with dogs. Even Coren admits this.

According to Stanley Coren, there are two other dimensions of dog intelligence, including adaptive and instinctive intelligence. Both of which, are just as important. Here’s why Beagles are actually more intelligent than you think.

Instinctive intelligence refers to the innate ability or skill that a breed was bred for. For example, Australian Shepherds were bred to herd livestock on farms all over the world.

Being able to push a crowd of sheep without additional human training requires a special type of intelligence we cannot ignore. They were born with this ability.

Likewise, Beagles were bred to hunt with their nose. As a matter of fact, the Beagle arguably has the best nose in the dogdom. According to Pet Central, Beagles are in the top three for best sense of smell – along with the Bloodhound and Basset Hound.

The Beagle’s nose is what actually what fuels their curiosity for all things in life. If you were getting so many unique odors on a daily basis, wouldn’t you be curious and want to explore the odor too?

You can probably imagine all the different types of scents that the Beagle encounters throughout their day. With so many distractions, it could be a big reason why they can’t “focus” on obedience training.

Instead of following commands, a Beagle might be more focused on figuring out where an intriguing smell is coming from. For this reason, they’re some of the best hunters, trackers, TSA dogs, health inspection dogs and more!

Beagles are generally good at problem solving and highly capable of learning from previous mistakes. Both of these are signs of high adaptive intelligence in this breed.

A Beagle owner, tells us:

My Beagle is great at communicating with us. I would say as many words until I say what she wants. Then she’ll dance in excitement to tell me that’s it!”

Beagles are also fantastic at communicating with humans. Dogs that learn how to effectively communicate with their owners are displaying high adaptive intelligence. And Debra’s Beagle is doing just that.

She continues by saying,

I can be on the other side of the house putting on sunscreen to get ready for a walk. And by the time I finish, she’s already waiting by the door. I’m not sure if i’m more impressed by her nose or smarts.

Though these are just a few examples, there are tons of stories just like this. Ask a Beagle owner and you’re sure to hear many similar stories.

Are Beagles For Me?

Why do you need a dog that’s considered “smart” by proclaimed experts. I would argue that you don’t really need a dog that’s too smart. All dogs, including Beagles, are capable of obedience training and learning basic commands.

The priorities of the Beagle may be very different from the priorities of dog owners. Obeying the sit, stay, roll over or come commands is not particularly important to these dogs.

As a Beagle owner, you need to understand this and accept them for who they are. This is their personality and there’s not much you can do about it.

If you want a dog breed that’s always eager to please and will do anything and everything for you, try a Golden Retriever instead.

When owners say their dog is smart, what they’re actually saying is that they’re easy to train. Beagles don’t really fit the bill, but saying they’re dumb dogs is very unfair. They can sometimes be more intelligent than the people who own them.

Most people raise dogs for companionship, and that’s exactly what owners should be considering.

Rather than looking at their intelligence rank, look at their temperament and personality. Does the Beagle’s personality fit yours (and your family’s)?

Do you own a Beagle? If so, what do you think – is your Beagle smart? Leave a comment in the comments section below to let us know.