Do Beagles Get Along With Other Dogs? – Here’s 5 Reasons Why

Beagles are popular, loving pets and make for a wonderful addition to every home. But, for some people, one dog is simply not enough! If you are keen on having a household with multiple dogs, you should first consider whether your Beagle will get along with other dogs.

So, do Beagles get along with other dogs? Yes, most Beagles easily make friends with other dogs. Beagles are friendly, curious dogs that have been bred to thrive in packs. But because Beagles can be a little possessive and stubborn, it’s important to be mindful when first introducing your Beagle to other dogs.

This guide will help you understand Beagles’ typical personalities and temperaments. It will also explore some advice about how to introduce your Beagle to new dogs, as well as how to train your Beagle to live in a multi-dog household.

Why Beagles Get Along With Dogs

To understand how Beagles will react to another dog, you should consider Beagles’ natural temperament and personality. Beagles are friendly and curious, both of which are traits that help them get along with other dogs.

But to be specific, here are the main reasons why it’s likely a Beagle will get along with any other well-tempered dog. Still, it’s important you provide them with proper socialization.

Beagles were originally bred as hunting dogs; they would accompany hunters in packs and help them track prey. As a result, Beagles thrive in the company of other Beagles, and even in the company of most other dog breeds.

This also a big reason why Beagles do well with children and family pets, such as cats. In the end, the Beagle will likely perceive them as members of the pack. As such, they tend to shower pack-members with love and affection.

Beagles are pack dogs and want to be around the family so ignoring your child (and other dogs) is not likely to happen.

Because Beagles are social dogs, they can get lonely or anxious when they’re left alone for long periods. Some Beagles even howl when left by themselves. Another dog will give your Beagle the company he or she needs.

Beagles do have pack-instincts that make them friendly with other dogs. However, they still need to be socialized with other dogs. If you take a Beagle away from the mother and litter too early, it may take longer for them to get adjusted to another dog.

Don’t let their calm demeanor in the home fool you. Beagles are very active dogs and have lots of energy to expend each day. And according to SimpleMost, Beagles are one of the 22 most active dog breeds.

Beagles need around 30 minutes to an hour of exercise each day. Not all owners have the time to spend with their dog’s necessary physical activities. So, that’s where the other family dog comes in – Beagles make the perfect playmate!

Their energetic and active temperaments will help them get along with other dogs by playing with them. However, you should try to ensure that the other dog breed also has high levels of energy to match the Beagle’s!

A possessive nature isn’t usually a great trait for dogs to have, as it could potentially lead to aggression. However, it’s uncommon for Beagles to show aggression but can help these dogs get along with others.

Beagles are extremely loyal dogs. But once they’ve determined that something or someone is worthy of protecting, then they can become possessive.

For instance, plenty of Beagle owners will agree that their dog loves food. This may mean they end up protecting and guarding the food bowls or the cabinet that stores the kibbles and treats. This tendency can happen with toys, humans and other dogs too.

There are ways to correct a possessive dog, as we don’t think it’s a good thing for dogs to have. We’re just stressing the point that a possessive dog isn’t going to show possessive behaviors because they don’t like the other dog. Rather, it’s the opposite.

Beagles are often called the “goldilocks dog.” They’re not too big, nor too small. Beagles aren’t too timid, but also not very aggressive. They can be friendly, but not too friendly in most cases. These dogs just have a very balanced temperament.

What this means is that Beagles have a temperament and personality that most dogs can easily get along with. They most likely won’t push the limits of the other dog to the point of annoyance. At the same time, they’ll play with dogs that enjoy the attention.

After all, Beagles are known to have high adaptive intelligence. In other words, they’re great at assessing the situation and making a decision. If dogs react aggressively to something, they’ll learn from it and act differently the next time around.

Needless to say, Beagles are gentle dogs when they need to be. Although they were bred for hunting, which implies aggression, they were really just tracking dogs. Canna Pet calls them notoriously gentle and friendly dogs.

That being said, Beagles strike the perfect balance of gentleness and activeness. These dogs have two gears and will often know when it’s time to be gentle and when it’s time to play hard! One owner explains this with his story:

I am so proud of Penny (Beagle) today. Tuppence (our Corgi) was spayed yesterday and we were concerned that Penny would be too excited and rough upon her return. As it turns out, Penny has been so gentle and understanding – it is amazing to watch.

However, if you’re bringing home a Beagle puppy, it may take some time for the gentleness to come out. Most puppies, regardless of breed, are more hyper than usual. A good way to calm down a hyperactive Beagle is by providing lots of exercise.

Introducing Beagles to Other Dogs

As we already discussed, a Beagle’s temperament and friendly personality helps them get along with other dogs. However, as an owner, there are some things you can do to make sure the process goes smoothly.

It helps if you start introducing your Beagle to other dogs when he’s a puppy, so the dog will likely grow up to be accepting and friendly. The critical socialization period of a dog is between 3 and 16 weeks of age.

During this time, it’s best for your Beagle to be playing with as many other dogs and people as possible. In this early period, puppies are sponges that are constantly absorbing info about the world, including other dogs.

It’s best to introduce two dogs to each other in neutral territory. If you want your Beagle to make friends with dogs that they meet on their walk, or at the park, here’s what you can do:

Keep both the dogs on their leash. Never let your dog off his leash when he’s meeting new dogs. Even if your Beagle is friendly, there’s no guarantee that he or the other dog won’t feel threatened and attack.

Continue talking to your Beagle and petting him. While you are walking, continuously reassure your dog and pet him so he feels safe. Beagles thrive on positive reinforcement and this is a great time for it!

Allow the dogs to pick up on each other’s scents. If one of the dogs urinate, allow the other to stop and smell it. Dogs communicate through ‘marking’ their territory, and it’s an important step in familiarizing them with each other.

Once the dogs have become friends outdoors, it’s time to bring them into an indoor setting for increasingly long periods. Depending on your Beagle and the other dog, you may need to exercise a lot of patience.

Bringing Other Dogs Into the Home

Bringing other dogs into the home is a bit more complicated than meeting a dog outdoors. This is because your Beagle considers your home his or her territory, and may, therefore, be more hostile to a perceived intruder.

If possible, arrange for your Beagle and the other dog to meet each other a few times in neutral territory, following the steps outlined above. Once they become friends outdoors, you can bring the new dog home.

If it’s not possible to have a few outdoor interactions, follow these steps:

Over time (with plenty of repetition), your Beagle and your new dog will likely become the best of friends – due to the pack-friendly nature of the Beagle.

However, if a few weeks have gone by and your Beagle is still aggressive, it may be helpful to call in an animal behavior expert. Experts will be able to identify specific issues that may be preventing your Beagle from welcoming in your new dog.

Dog Breeds That Get Along With Beagles

For all the reasons we described, Purina calls Beagle one of the best dog breeds to have in a multi-pet home. And, we strongly agree with them!

But while Beagles are generally friendly toward all dogs, there are a few specific breeds that will match your Beagle’s energy and temperament.

Based on Friend of the Dog’s thorough research, these are the dogs that scored the highest in Beagle compatibility:

Of course, other Beagles will also get on well with your Beagle – you may even find them hunting or howling together!

On the other hand, these are the dog breeds that scored the lowest with Beagle compatibility:

This is by no means a guarantee. In addition, the list isn’t an exhaustive list of all the dog breeds in the world. The list is an opinion based on research of temperament of several dog breeds.

Beagles and Other Dogs

Beagles are friendly, loving dogs who get along well with most other dogs. They have a sociable temperament and have been bred to thrive in packs. They are high energy dogs who love company, so they will generally welcome a new dog into their home!

It’s important to be mindful of how you introduce your Beagle to other dogs. It’s best to first introduce the two dogs in neutral territory by walking them together. After becoming more comfortable with each other, bring them indoors.

Make sure you are always giving your Beagle plenty of socialization, and he’ll quickly make friends with your new dog. You’re on your way to becoming a multiple-dog household! 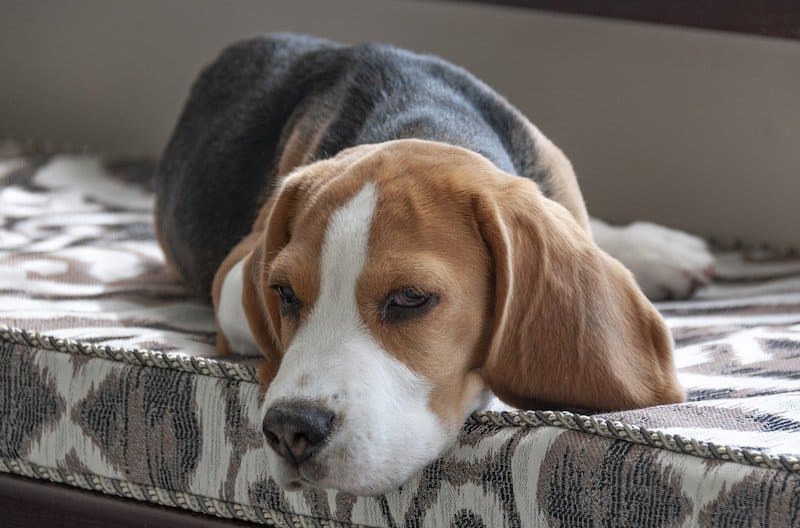 ← Previous
How Much Does a Beagle Cost? - A Complete Guide to Beagle Prices

My one year old beagle simply hate the company of other dogs. How this can be overcome

Did you socialize your beagle when you first got him/her? The dog can still overcome this, but it'll take more time and patience now that the dog is a little older.