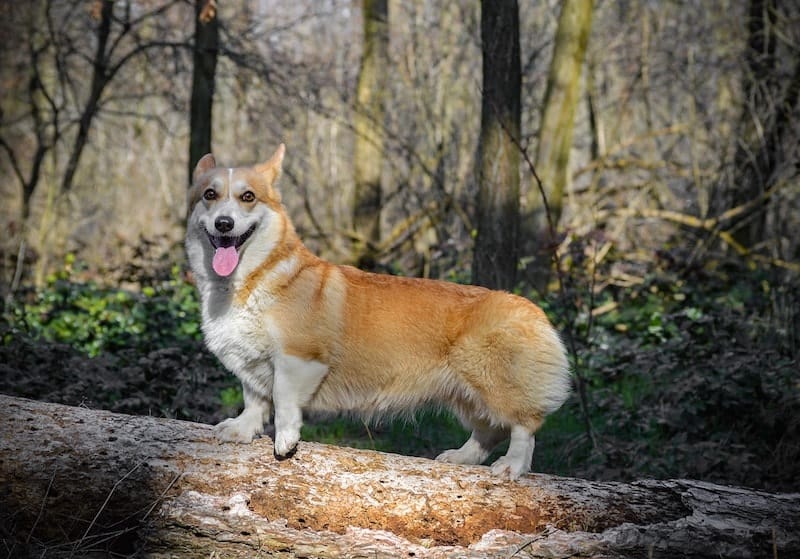 The Welsh Corgi is famously known for distinct physical qualities, including an elongated body, short stubby legs and no tail. But are Corgis really born without tails? Let’s investigate this long-standing mystery.

So, do Corgis have tails? Most Pembroke Welsh Corgis are born with a tail. But because of the breed standard, many have their tails docked 2 to 5 days after birth. Natural bobtailed Corgis do exist, but they’re not nearly as common. On the other hand, Cardigan Corgis almost always retain their tails.

If you’re like me, you thought all Pembroke Welsh Corgis were naturally bobtailed dogs at one point. Unfortunately, that’s far from the truth. Join us as we uncover the mystery surrounding the tail-less Corgis.

Why Corgis Don’t Have Tails

There are more than one reason why a Pembroke Welsh Corgi can have no tail. Not only is the bobtail “normal” for these dogs, but they can also be naturally born without tails.

Based on our research, here are all the reasons for a tail-less Corgi. You may be shocked at the reason we do this to our dogs.

Today, it’s rare to see a Pembroke Welsh Corgi with a tail. Though you may see some every now and then, the overwhelming majority are tailless.

The reason for this isn’t because we have a ton of Corgis being born without tails. Rather, their tails are getting docked (cut off) as a young puppy.

According to the American Kennel Club, a Pembroke Welsh Corgi that conforms to the breed standard will need to have a docked tail. In fact, it should be as short as possible without creating an “indentation.”

If the Pembroke Corgi were to have a natural bob, then a tail up to two inches in length is sufficiently short and acceptable for the breed standard.

Cutting a tail of a Pembroke Welsh Corgi is not a relatively new thing. It’s been happening to these dogs for decades and unfortunately, has become a “tradition” for them.

As a matter of fact, this practice has been around since the ancient Roman times, according to the AVMA. The Roman people believed that docking tails would prevent dogs from contracting Rabies.

So you can imagine why breeders opt to dock the tails of their Pembroke Welsh Corgis. Those that conform to the breed standard may be able to charge higher prices for their puppies since they’re “going by the book.”

No Tails for Herding

If you don’t already know, Welsh Corgis were bred to herd livestock. And despite their short stature, they’re known to be some of the most skilled and fierce cattle herders in the dogdom.

If you own a Corgi, you’ll notice that with the absence of farm animals, they’ll start to herd humans, especially with kids. It’s a bad habit, but they can’t help it – it’s in their instincts!

Get ready for a lot of herding as a puppy! Our Corgi nipped our ankles regularly for the first year. So, one of the first things you will need to teach them to do is not herd you!

But what does this have to do with their docked tails? The original belief was that Corgis needed to dock their tails in case a cow were to stomp on it during herding. Since these dogs are low to the floor, it seems like a reasonable concern.

However, Pembroke Welsh Corgi owners are quick to refute this claim. Many say that the Corgis’ natural tails are curled upwards, meaning that it’d be it’d be very difficult for a cow to stomp on them while working.

One Reddit user (Zyx) mentioned a study by Sweden when they were looking into banning the practice of tail docking. You can read more about it here.

He said, “There’s very little evidence to support that this would actually be a problem…when Sweden first considered banning tail docking, they specifically studied this claim and found that it didn’t really matter.“

Another reason why Corgis may have a docked tail is because they were actually born with it. These are naturally bobtailed Corgis, and despite belief, they do exist.

However, not all bobtailed Corgis are born without a tail. Some will have a tail, just much shorter than the “normal” tail of a non-bobtail Corgi.

According to UC Davis’ School of Veterinary Medicine, Natural bobtails happen because of a mutation in the T-box gene. The gene is inherited and affects both sexes of the dogs with equal chance.

You just need one copy of the mutated T-box gene to produce a natural bobtail dog. However, the length of the bobtail can vary quite a bit depending on a mix of other genetic factors.

A natural bobtail is not exclusive to the Pembroke Welsh Corgi. For example, they’re seen in Australian Shepherds, Blue Heeler, Brittany Spaniel, Spanish Waterdog, the Schipperke and many more popular dog breeds.

The practice of tail docking will vary depending on the breeder and/or veterinarian. Not only does it vary by cut-length, but also the time they decide to cut the tail.

However, according to Pet Assure, the process will happen sometime between 3 and 7 days after birth. Others prefer to do it sooner, just 2 to 5 days post-birth. It really doesn’t matter too much as long as its very early on.

Perhaps the most common question I see is, do Corgis feel pain when they’re getting their tails docked? It’s not an easy question to answer and there’s been a ton of heated debate on this topic.

Advocates claim that docking a Corgi’s tail this early in their life isn’t painful or uncomfortable because the nervous system hasn’t fully developed up to this point.

On the other side, opposers point to evidence that suggests the basic nervous system of a puppy is enough to feel pain similar to that of an adult dog. It’s a bit alarming considering how widely practiced tail docking is in the USA.

However, there is no conclusive evidence on whether these dogs feel pain during the process.

Many puppies will produce “shrieks” or other unpleasant vocalizations immediately after the tail is cut. Still, there are plenty of puppies that get their tails docked while sleeping and don’t even wake up.

But whether a Corgi will actually feel pain or not, it’s highly unlikely they’ll even remember the procedure years later.

How They Cut a Corgi’s Tail

The procedure of cutting a Corgi’s tail is not one I’d like to witness. But if you’re considering buying a dog from a breeder that docks the puppies’ tails, it’s good to have a better understanding.

As we discussed, this happens very early on in the puppy’s life. Furthermore, there are two popular methods of doing so.

Keep in mind that these tail docking procedures are done without the use of pain killers or anesthesia. Sometimes they’re awake, but it’s mostly done when they’re asleep.

The most popular method and traditional way of removing a puppy’s tail is by using a pair of scissors. They cut through tendons, muscles, cartilage and potentially many nerves with this method.

Alternatively, some will use the less popular method of using a rubber band to cut the blood circulation to the tail. After enough time, the tail will eventually rip right off.

If you’re really that curious about how this works, there are plenty of YouTube videos that you can check out now.

Tail docking is currently banned in several parts of the world, including Australia and most of Europe. However, it’s still legal and very popular in North America (USA, Canada).

Thanks to the Animal Welfare Act of 2016, tail docking was banned in Europe. At least, for all dogs except for “working dogs” in law enforcement. In addition, these dogs needed to have their tails docked by a licensed veterinary surgeon.

However, this wasn’t the first time a docked tail had been specified for working dogs in England. According to Experts, England had a tax on companion dogs in the 17th century.

To differentiate working dogs from companion dogs, the working dogs were required to dock their tails. And because Corgis were popular herding dogs in England, they had to conform.

Though the tax was repealed in 1796, it was too late by then. Many dog breeds, such as the Welsh Corgi, had already developed a certain “look” among the people. It had already become a tradition.

It’s likely that this was where the “classic” appearance of the tail-less Pembroke Welsh Corgi had developed.

To Dock or Not?

Most owners think they don’t have a choice. This may be the case if you purchase a dog after birth. However, you can request the breeder to skip this procedure if you contact them prior to the birth of the dog.

Some breeders may outright reject your request. Still, you don’t want to ignore reputable breeders for the sake of this request.

The less reputable and more desperate Corgi breeders will likely agree. However, finding a reputable breeder is always important for the long term health of the dog.

If you’re having a hard time finding a reputable breeder willing to skip the docking, then try looking in areas where the procedure is banned.

Some people frown upon Pembrokes with a tail because it’s not the “standard” and this is ridiculous. Tails were originally docked for working dogs. So if your Corgi isn’t a working dog then the tail doesn’t need to be docked.

The point that this Reddit user is trying to make is that it doesn’t matter if your Pembroke Welsh Corgi has a docked tail or not. Unless your dog is a working dog, does it even matter? Today, it’s purely for cosmetic purposes.

Ultimately, it’s up to you to decide. Full disclosure: our Pembroke Welsh Corgi has her tail docked. However, this was well before we knew anything about the procedure, rules and reasons for docking.

With this guide, we hope you make an informed decision. Had we known this information back then, we may have made a different decision. Or, maybe not.

Tracey J is a licensed vet tech. With over 5 years of veterinary technician experience, she's dedicated her life and career to dogs. When she's not studying or working, she's taking care of her Mini Australian Shepherd - Olympus!