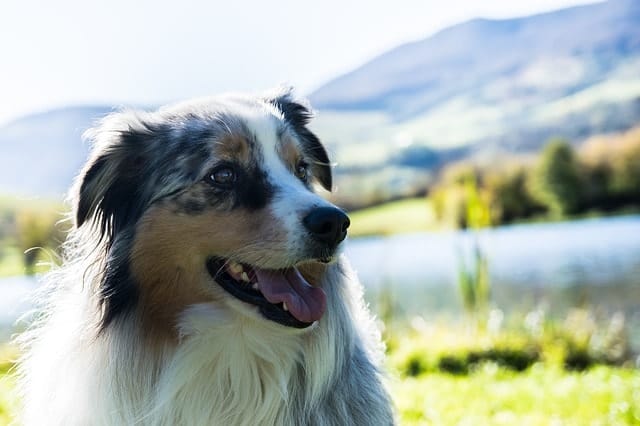 Like humans, dogs come in all shapes, sizes and colors. It’s what makes them unique creatures and why we love them. So, what are the different colors of dogs?

Dogs can come in many colors, but are mostly bred with 9 base colors: black, white, brown, red, yellow, gold, cream, gray and blue. However, there are plenty of dogs with patterns that have multiple colors.

The wonderful colors of different dog breeds can range quite a bit. Many dogs aren’t a solid color, but rather a pattern of different colors.

What’s the Most Popular Dog Color?

Believe it or not, the most common coat colors of dogs are black, brown and white. According to Family Pet, it’s because these are the colors of several of the most popular dog breeds.

For example, the Labrador Retriever, German Shepherd, Rottweiler, Poodle and Beagle all fall in this category. So, it’s easy to see why.

But what’s really interesting is that red or auburn colored dogs have by far the highest adoption rates. The original belief was that blonde dogs were the most popular in regards to adoption.

According to Giles Webber from Dog Trust, it may be because of the rarity of auburn colored dogs at the rescues. Just 3 percent of dogs at Dogs Trust are red or auburn.

What’s surprising is that red or auburn dogs find a new home 3 days quicker than the average.

Though black, white and brown may be the most common dog colors, there’s a good chance that red/auburn is the highest in demand.

Dogs come in all sorts of colors. However, we’ve identified 9 solid dog colors that are by far the most popular and common.

We understand that there are other solid colors out there. If we’ve missed any that deserve to be on this list, let us know in the comments section below.

With that said, here’s our list of the most popular colors and interesting patterns seen in dog breeds all over the world. What’s your favorite?

Black colored dog breeds may just be the most common dog color out there. Though there are plenty of solid black dogs, many of them come with other color markings.

Popular markings with the solid black as the base include tan and/or white markings.

For example, Rottweilers, Black and Tan Coonhounds, Doberman Pinschers, Beaucerons and Hovawarts all have a solid black coat with tan markings.

Some dog breeds will have a solid black coat with tan and white markings. Although these dogs are usually referred to as “tri-colored,” the majority and base is solid black.

So, well call them black dog breeds. These dogs include, the Bernese Mountain Dog, Australian Shepherd, Beagle and more.

And of course, you have black dogs with only white markings, such as the iconic Border Collie.

Another unsurprisingly common color of dogs is white. It’s a classic color that represents purity, innocence and goodness. It’s everything that dogs are.

There are a lot of dog breeds that come in solid white, though not the traditional colors for all those breeds. Still, it’s hard to deny the majestic aura of a solid white dog.

However, white dogs with markings are much less common than their solid white counterparts. It’s actually the opposite of black dogs.

With dogs, the color brown gets a little tricky. Why? Because there are so many variations of brown with numerous dog breeds. It’s not as black and white as, well, black and white colors.

The shades of brown can include a gray-brown, fawn, dark brown, milk chocolate, mid-tone brown, liver and even mahogany in some cases. Others similar colors are debatable.

There are plenty of “classic brown dogs” that you have certainly heard of. For starters, there’s the Chesapeake Bay Retriever.

Other brown dogs include the Bloodhound, Airedale Terrier, Chow Chow, Staffordshire Terrier, Boxer and much more.

In addition, quite a few spaniel and terrier breeds fall into the brown dog category. Mostly the lesser known breeds of those groups, such as the Field Spaniel or Border Terrier.

If you look up the several dog breeds that I just mentioned, then you’ll see exactly what we mean by the wide spectrum of brown.

Red dogs are not that unusual or unique as they sound. When we say red dog, we don’t really mean Clifford the Red Dog. They’re not literally red dogs.

Rather, red dog breeds are dogs that sport a bright brown, orange and tan coat with a slight hue of red. It’s not as complicated as it sounds. If you see one in person, you’ll know.

Some red dogs are mistaken for brown dogs (and vice versa) because the colors can be so similar. We wouldn’t blame you if you called a red dog, brown.

In other dog breeds, “red” can also refer to chocolate, liver or straight up brown. It depends on the dog breed too.

There are few dog breeds that are solid red. However, the Irish Terrier is famously known for being the only all-red terrier.

Other red dogs include the Beagle, Irish Setter, Shiba Inu, Vizsla, Cavalier King Charles Spaniel and more. All of which, are simply stunning in person.

Like the other dog colors on this list, there are different variations of the color gold when it comes to dogs. Some more obvious than other gold colors.

Plus, many of the Golden Retriever mixes also come in gold thanks to the dominant color genes. As a result, Goldendoodles, Golden Shepherds and others come in an obvious gold coat.

Blue dog breeds are much rarer than the others. However, that doesn’t mean they’re not exotic and beautiful dogs.

When referring to blue dogs, we don’t mean the blue that you’re accustomed to. Rather, blue refers to a gray, sliver or slate color with a hue of blue.

As you can imagine, there aren’t many solid blue dogs on the market. The most common blue dogs are the Blue Lacy, Kerry Blue Terrier, Thai Ridgeback, Weimaraner and Great Danes.

Some dog breeds aren’t typically bred in blue, but still see a huge demand for the color. For example, the French Bulldog comes in two variations of blue: brindle and fawn blue.

However, there are problems with dog breeds that aren’t meant to have a blue coat. With blue comes a condition called Color Dilution Alopecia.

This “genetic defect” can cause abnormalities in how pigment (or color) gets distributed to the fur of the coat. In other words, this can lead to hair loss, skin infections, stunted fur growth and more.

For this reason, I highly recommend not picking a blue dog if they weren’t meant to sport that color.

Like with brown and red dogs, blue and gray dogs are very similar. Though the Weimaraner is called the “Gray Ghost,” they have been called blue dogs as well.

The most popular gray dog breed is probably the Siberian Husky. Even then, they’re rarely solid gray. Their coats are usually accompanied by white and sometimes black.

With that said, the only purebred solid gray dog breed is the Weimaraner – with the Scottish Deerhound being close.

As a matter of fact, Weimaraners come in a few color variations, such as silver-gray, mouse-gray, blue-gray and just simply silver. All of which, have the underlying gray tone.

Most “gray dogs” have coats accompanied by other color markings. The most common additional colors are black, white, tan and brown.

These other gray dogs include the Alaskan Malamute, Irish Wolfhound, Norwegian Elkhound, Keeshond and more.

Cream is used to describe the pastel color of yellow. It can also be called an off-white color. Because of the similarities, it’s sometimes difficult to differentiate cream from yellow or white.

This color will range depending on the dog breed. Cream can be anything between white with a touch of yellow to a more obvious yellowish blond.

There are no dog breeds that are known for a cream color. Most of the cream dog breeds are more popular in other colors.

For example, Golden Retrievers have a cream variation, but are most known for being gold. Other cream dogs include the Pug, Great Pyrenees, Shar Pei, Chow Chow and more.

Cream is not the most obvious dog color. Most of the time, you won’t even know until someone points it out to you.

Yellow is another color that’s much harder to differentiate. Not only is this color similar to cream, but also to gold.

Yellow dog breeds can come in a yellowish gold tan, as seen in the yellow Labrador. Or they can come in a lemon (pale yellow), such as the Beagle (though lemon Beagles usually have white too).

Still, there are more yellow colored dogs than you think. For example, the Bearded Collie, Afghan Hound, Anatolian Shepherd, Scottish Terrier, Pomeranian and others all come in yellow.

It’s worth noting that puppies may initially have a white coat, but develop into a more obvious yellow as they age. In addition to a color change, patterns may form as well.

Does the Color of a Dog Matter?

Usually I would say no – all dogs are loving and would make great companions. However, according to newly-discovered scientific research, maybe the color of a dog does matter.

How does it matter? The University of Sydney in Australia revealed in 2018 that the color of a dog can impact life expectancy and the frequency of health issues.

Because Labradors were one of the most popular breeds, the Australian university decided to do a study on Labs. They analyzed roughly 33,000 patient records from veterinary practices in the United Kingdom.

What they found was shocking. The university researchers discovered that chocolate Labradors had a higher chance of developing ear or skin conditions.

In fact, Paul McGreevy (research lead), said chocolate Labs were twice as likely to suffer from an ear inflammation. He added that they were four times more likely to develop dermatitis.

So maybe the color of a dog matters more than you think. However, we still think that it’s probably best to reject a dog simply because of color.

According to PetMD, the colors of dogs matter – especially if you’re talking about adoption. The reality is that hundreds of shelters across the world are facing this epidemic: the “black dog syndrome.”

Animal shelters and rescues are used to having a large number of black dogs that never get adopted. Are solid black dogs really that scary?

The bias against black dogs is real. People find black dogs intimidating and prefer to go with a “warmer” color. In addition to absurd superstitions, the word “black dog” also refers to depression. Nothing but negative connotation.

What’s even worse is that they’re not the only dog group facing discrimination, white dogs are too. In fact, white dogs may have it even worse.

Thanks to the breed industry standards, white dogs are looked down upon if they weren’t meant to be white. Unfortunately, breeders view a litter of white dogs as a defect in the lineage.

Their solution? To terminate these white dogs because it may ruin the breeder’s reputation. It’s a horrible situation.

So next time you’re looking for a specific color, consider picking up a black or white dog instead.

Tiffany is a licensed vet tech and a product of Texas A&M College of Veterinary Medicine (class of 2022). With over 5 years of veterinary technician experience, she's dedicated her life and career to dogs. When she's not studying or working, she's taking care of her Mini Australian Shepherd - Olympus! Read More.