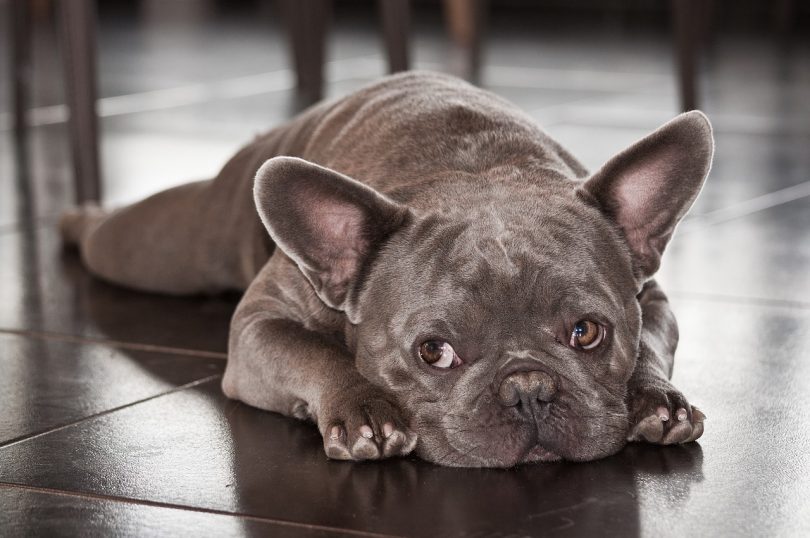 French Bulldogs are undeniably some of the best dog breeds out there. They’re playful, highly intelligent, affectionate and most importantly, irresistible. If you’ve decided to keep a Frenchie, you’ve made a great decision.

Now the fun part comes: picking out your new French Bulldog pup. It can be a little intimidating for new owners, as there are so many physical variations of these dogs, especially with coat colors.

But not to worry, we’ve compiled a list of all the most popular French Bulldog colors for your convenience. Not matter what your taste is, you’ll find the perfect Frenchie that fits your style.

RECOMMENDED: The Colorful Guide to Dogs

There can be many more color coat variations of the French Bulldog. However, we’ve managed to identify the 8 most common and prevalent colors.

Despite the large number of Frenchie colors, the AKC standard for French Bulldogs only accepts 9 colors/patterns. Anything else besides the following colors are grounds for disqualification:

The numbers in the right column are the official AKC registration codes for the coat color. However, it’s really not a big deal if your Frenchie isn’t part of the “breed standard.”

Unless you plan to show your dog or compete in any other AKC competitions, it won’t matter much.

Unfortunately, we won’t be covering all the standard Frenchie colors. Rather, we picked the most popular and/or interesting ones.

One of my favorite color patterns, which also happens to be one of the most popular, is the Brindle. It’s important to know that Brindle isn’t really a specific color. Rather, it’s a color and pattern.

Brindle usually features dark colors, such as a combination of different degrees/shades of brown and a “dusky tawny” color. At the same time, there are thin black colored stripes that give the coat a unique texture.

It’s almost like a tiger’s coat, which explains why Brindle is sometimes called the “tiger stripe.”

Furthermore, there are many variations (and names) of the Brindle, such as Seal Brindle (almost non-existent black brindle) and Tiger Brindle (very obvious brindle pattern).

This Brindle color isn’t exclusive to French Bulldogs. They’re seen in other dog breeds, guinea pigs, cattle and sometimes horses. Still, I admit they look the best on a Frenchie.

The “pied” Frenchie is another popular coloring for these amazing little dogs. However, pied is very different from Brindle.

According to National Purebred Dog Day, a pied-colored Frenchie needs to have at least 50% coloring or patches of white and another color. In addition, the other color needs to be present on the dog’s head, neck and body.

We call this “dappled” coat colors, which pretty much means the dog has spots and patches on the coat.

The word “pied” is used to refer to a specific dappled coat color. In this case, it means a white base color with patches of dark color. These patches and spots can range anywhere from dark gray to brown or black. It really depends on the dog.

However, the problem with pied Frenchies is that they lack pigment – which can potentially lead to heath problems down the line. Though this pattern is recessive, it can be specifically bred for.

If you think about it, Pied is the exact opposite of Brindle. Still, it’s a fantastic look on a Frenchie and very popular among this breed’s community. Just make sure you acknowledge any potential issues.

Finding a Cream Frenchie is certainly more difficult than the first two colors. However, you can definitely find one with a little patience. And while some owners may think this color is “boring,” I think it’s stunning.

The cream color of the French Bulldog is pretty self-explanatory. They have a solid coat with the signature eggshell color seen in the base of the pied Frenchie.In other words, they’re just the pied Frenchies without the dark spots and patches.

Again, cream is not a color exclusive to French Bulldogs. For example, it’s much more common with a Golden Retriever.

It’s worth noting that a Cream Frenchie can sometimes have a dark mask. However, they’ll still be just as beautiful and gorgeous. Some even owners prefer the mask because it adds a nice contrast.

This itself color is certainly popular, but they’re surprisingly rare because it’s not an easy coat color to breed for. For this reason, expect to pay a premium price if you want to get your hands on a Cream Frenchie.

The Fawn Frenchie can be seen as the opposite of the Cream French Bulldog, at least in regards to coat color.

Frenchies with a fawn color can come in a tan, or with a reddish-caramel. Others call it a “light brown.” The spectrum can range with a Fawn Frenchie, but typically it’s anywhere between the tan and red.

It’s certainly a common color, as seen in many other dog breeds like the Great Dane, Beagle, Bloodhound or the Boxer.

Like with the cream variation, a Fawn Frenchie does not have any spots or patches. Instead, it’s a solid color throughout the coat with few exceptions.

However, the only other color markings can be a subtle mask or markings in other places around the head and ears. In addition, these markings tend to be darker than the coat color.

Though they’re not as popular as the Brindle or Pied, the Fawn Frenchie is still a very attractive French Bulldog. The contrast of the tan color with the (often) black mask looks really good in my opinion.

The Blue Fawn Frenchie is truly a spectacular sight that few have the opportunity to ever witness. They’re unique, beautiful and a little exotic. But what causes this French Bulldog to produce this blue hue?

The “blue” color can vary quite a bit in Frenchies. For instance, some of these dogs come in a darker blue coat, which is generally caused by a copy of the brindle gene.

A blue fawn will usually have a dark shade of fawn as the base, with a blue hue most noticeable on the ears and back.

Though it’s a little bit difficult to tell in a picture, the Blue Fawn Frenchie pictured above has blue on the back. It’ll be a lot more obvious when seen in person.

However, the blue doesn’t always have to be on the ears or back. Sometimes they can be on the Frenchie’s face (mask) as well. Or, it can be in all three places. Again, this isn’t a standard color, so it varies a lot depending on the parentage.

Like the Blue Fawn, the Blue Brindle French Bulldog has the same double recessive dilute genes. A copy of these genes are carried over – one from each parent.

The result is a gorgeous gray color base with a noticeable blue shade. But what really sets them apart from the Blue Fawn is the brindle pattern on top of the blue coat.

Most of the time these dogs will develop light-colored eyes as well. When put together with the unique coat, they’re simply stunning to look at.

Finding a Blue Brindle Frenchie is going to be difficult because they’re relatively rare. For this reason, expect to pay premium dollars if you plan to get your hands on one of these.

However, you can still find them at some reputable AKC-registered breeders, such as Lindor French Bulldogs.

Chocolate colored Frenchies are similar to Blue Frenchies, in the sense that they are a base color for French Bulldogs. For example, Chocolate Frenchies also come in Chocolate Brindle and Chocolate Pied.

However, these colors are arguably even more rare than the others on this list. It’s because, like the blue color, the chocolate color comes from two copies of a recessive gene.

The means that one copy of the recessive gene must come from each parent, making it slightly more difficult to breed for.

And if you thought it couldn’t get more difficult or complicated, this recessive gene has is a non-testable gene. In other words, there’s currently no available DNA test for identifying this gene.

The only way to “know” if a French Bulldog has the chocolate color gene is with the good ol’ eye test. If it looks like chocolate, it’s probably chocolate.

What we do know is that Chocolate Frenchies can range from a light milk chocolate color to a dark brown chocolate. In addition, their eyes also will vary greatly in colors – such as yellow, green, gold and more.

The last but not least is the classic Black Frenchie. It’s not difficult to explain what this is – they’re literally solid black French Bulldogs without any other markings.

Black means black, without a trace of brindle.

You can expect the coat to be glossy and smooth without any brindling at all. Nothing unordinary or extraordinary, they’re just solid black.

Despite being a non-standard color, Black Frenchies are fairly popular. Just by browsing online puppy marketplaces and adoption sites, I see plenty of them.

Although this color isn’t the most exciting, it’s a fairly classic look. You can’t really go wrong with a Black French Bulldog.

Some of these colors are not “normal” or natural. And by that, I mean breeders have to specifically breed for these colors (or at least attempt to).

When breeders do this, they’re usually not breeding for good health because the puppy’s long term health doesn’t sell as well as rare colors (although it should).

Keep in mind, this isn’t a specific problem for blue colored French Bulldogs, but for almost every blue dog (There are exceptions. For example, blue merle Australian Shepherds are okay).

This genetic defect is potentially harmful because it creates abnormalities in how pigment (color) gets distributed to the hair of the coat.

In short, this can lead to stunted growth of fur, which may eventually lead to hair loss. Also, with hairless patches on the skin, French Bulldogs are susceptible to secondary skin infections.

For this reason, it’s highly recommended you don’t use harsh grooming products with your Blue Frenchie. Doing so will only make things worse.

At the end of the day, is it really worth getting a Blue French Bulldog if these potential and serious health problems may arise?

No matter what color, a French Bulldog will be an affectionate and endearing companion for years to come. It really doesn’t matter which French Bulldog color you end up getting, that is, unless you decide on blue.

Rare Frenchie Color is Not Better

A rare color doesn’t usually mean “better.” Rather, it means that it’s probably not a breed standard color and most reputable breeders don’t want to spend to much effort producing those colors.

That being said, the term “rare” can be quite subjective. Though it’s possible for these rarer colors to happen naturally, it doesn’t happen often.

Most of the time, these colors are the result of a recessive gene (as opposed to a dominant gene). Plus, most ethical and reputable breeders tend to avoid them if possible.

But just because a breeder is trying to sell you a Frenchie with an rare color doesn’t mean they’re bad breeders. However, if the breeder advertises and charges a premium for these colors, I would stay away.

If you’re looking for AKC certified breeders, you can check out their convenient French Bulldog marketplace.