What Were Great Danes Bred to Do? – Roles, Jobs & History of Great Danes

The Great Dane is the 16th most popular dog breed in America, according to the American Kennel Club (AKC). Additionally, they’re one of the biggest dog breeds ever. For such a large dog, you may be wondering what their initial purpose was.

So, what were Great Danes bred to do? Originally, Great Danes were bred to be wild boar hunters. However, the ferociousness that Great Danes once had has been bred out of the modern breed so they probably wouldn’t make great hunters today! Instead, they’re mainly family companions and dogs.

Great Danes make great family pets, but they weren’t always primarily bred as family pets. Let’s have a further look into the Great Dane breed and what they were initially bred to do.

The Great Dane is noble and large. It’s often referred to as the “Apollo” of dogs or as a “gentle giant.” Despite the Great Dane’s imposing stance, he is actually really sweet-natured and affectionate.

There’s a lot to love with the Great Dane, literally. These dogs stand over 30 inches tall and can weigh up for a staggering 200 pounds. If you’re going to bring home a Great Dane, you’re about to take on a huge commitment (pun intended).

But despite their massive size, Great Danes can also come in handy for families with kids. They’re fantastic with children and make excellent nanny dogs. Plus, they require very little maintenance.

Aa alert as any breed, the Great Dane also makes a great guardian and watchdog. Sure, they may be sweet dogs, but the intruders don’t know that! Most people wouldn’t mess with a dog of this stature.

They’re extremely friendly and can be the perfect fit to nearly any family. As long as you have the space for one, a Great Dane is never a bad choice.

Great Dane: Origins of the Name

These dogs weren’t always called Great Danes. As a matter of fact, they’ve had multiple names throughout their long history.

Before they were given their current breed name, Great Danes were referred to as generic “Boar Hounds.” And it wasn’t until the 1500’s that people began to call this breed, “English Dogges.”

Later that century, many nobles of Germany began to keep to most handsome and largest of these dogs in their home. At this point, they were referred to as Chamber Dogs, or Kammerhunde, in German.

By the 18th century, the name “Great Dane” was finally used for these dogs. A naturalist from France went to Denmark and saw this dog breed, which he thought was similar to a Greyhound, but was a Danish version of the Boar Hound.

He later returned home with the dog to call him the Great Danish Dog or Grand Danois (as it was in French). The largest dogs in the breed then became known as Danish Mastiffs, which is a name that stuck despite having nothing to do with Denmark.

In the end, the name was shortened to “Great Dane.” Since then, we’ve been calling this breed by that name.

Why Did We Breed Dogs?

Nowadays, your average (and even your not-so-average) Great Dane won’t be a hunter of wild boar. In fact, it’s likely that he is your loving and adorable family pet.

However, it is important to realize that, initially, Great Danes were bred with a specific purpose in mind, as were all dogs over time. Dog breeding isn’t as simple as getting a male and female together. Oh no, it’s much more complicated.

If breeders are looking to create a dog for a specific purpose or to have a specific temperament, they need to find ‘parent dogs’ with those features.

Honing a breed takes generations and generations to perfect. Always keep this in mind when looking into the breeders for your Great Dane.

Even though dogs don’t serve the roles for their intended purpose anymore, breeders and organizations have made a huge effort to keep the appearance and temperaments of the original form.

What Great Danes Were Originally Bred For

These German breeders focused on improving the Great Dane’s temperament. Due to the fact that Great Danes were bred to be wild boar hunters, they had an aggressiveness in their character.

In order to turn these dogs into great family companions, the old aggressive tendencies must be eliminated to a certain degree.

Wild boars are fairly ferocious and so the Great Dane had to be too. Fortunately, the breeders were successful, as many modern Great Dane owners enjoy the much gentler version of these dogs today.

It is uncertain when and how Great Danes came to the United States. However, the Great Dane Club of America began in 1889.

Furthermore, the Great Dane Club was also the 4th breed club given permission to join the AKC (American Kennel Club), making them one of the oldest “official” breeds.

Great Danes are, when well bred, the best-natured dogs in existence. A Great Dane makes a sweet, affectionate and gentle pet that is eager to please. It’s why they’re so easy to train!

And while they’re “engineered” to be much more gentle than they were in their wild boar days, Great Danes still carry many of the features that once made them great at hunting such animals.

Let’s examine these physical qualities of the Great Dane and how they made these dogs such formidable hunting dogs in the past.

Great Danes have a short and thick coat that has a smooth and glossy appearance. Though they have a single coat, they are still moderate shedders.

Just from the sheer size of these dogs, you can expect to be dealing with a lot of fur around the house. At least they’re not a large double coated dog, right?

As such, the thickness of the coat protects the Great Dane while chasing down wild boar. Think of it as having an “armor” or fur.

With a rectangular and long head, the Great Dane is chiseled under the eyes. The female head is much more delicate than its male equivalent.

Historically, certain dog breeds like the Great Dane have their ears cropped. Ear cropping is a surgical procedure in which the ears are partially cut to maintain a pointy and erect ear.

Though it’s mainly for cosmetic purposes today, it was meant for working dogs that may be prone to ear damage during their work. Hunters believed that the naturally long droopy ears of the Great Dane were not ideal during boar hunts.

The Great Dane looks amazingly powerful in the body – and they are. They have a deep and broad chest with a well-pronounced breastbone.

In addition, the shoulders have a gentle slope towards the back. Just by looking at body of these dogs, it’s easy to see why they were chosen as a wild boar hunter.

The sheer size of these dogs made them much harder for boars to fight back. If you didn’t know, wild boars are highly aggressive and dangerous animals.

The Great Dane’s gait demonstrates its strength and power. Its movements are easy and long, but also maintains a top line that is level.

The athletic gait of these dogs meant that they were agile while they were hunting, but also provides an aura of power and strength too.

Massive Size of the Dog

One owner still sees this instinct in his Dane, saying:

The Great Dane’s role in hunting was to seize and hold the prey so that the huntsman could get there and kill it. Their great size and brute strength helped them enormously in this task.

Clyde when chasing his two lab friends in play would mouth them right on the back of the neck in mid stride. I would always correct him for it, but now realize it might be just as instinctive as a Pointer pointing.

Hunters and Dane owners describe this action as the dog’s “hog take down style” that no other breed really does. Because of their size, they’re one of the few that can even attempt something like this on the field.

Evolution of the Great Dane

We often hear Great Danes being referred to as “gentle giants” but they were certainly not gentle from the very beginning!

These dogs were great hunters but as hunting became less and less popular, the breed was forcibly evolved so that the once vicious boar killers became soft show dogs and all-around companions.

Today’s Great Danes love nothing more than to live a leisurely life. They’re pretty docile and are rarely aggressive in their temperament. This is obviously really different to how they once were.

Scooby-Doo aside, there have been some remarkable Great Danes in the world. One such example is Juliana who, in 1941, urinated on a bomb that had fallen on her house.

This diffused it and she was awarded a Blue Cross Medal! Whether this was intentionally or not, we like to believe it was.

Three years later, she was awarded a second Blue Cross Medal when she alerted the authorities to a fire. This really shows just how alert Great Danes can be.

Another great Great Dane was Just Nuisance. This male Great Dane was officially enlisted in the Navy! This dog used to get on the train, which was free to sailors. However, the railways didn’t like him having a free ride.

They hated him having free rides so much that they threatened to have him put down. That’s when the Navy stepped in and enlisted him so that he was allowed to ride with them!

Great Danes are far from what they used to be. These dogs are the ultimate nanny dogs and can become a great playmate for older children.

They can be a problem with smaller children because they’re so large. In other words, Danes may unintentionally knock over or hurt a little toddler.

Great Danes thrive in active families today. Though they were once skilled hunters a long time ago, their physical attributes remain the same.

This means they require the same physical exercise needed to maintain a healthy lifestyle. And according to Dog Time, 30 to 60 minutes of daily physical activity should suffice.

The modern Great Dane is everything you would want in a large dog breed. They may not make the best guard dogs because they’re so friendly, but they can scare off intruders with their immense size.

Today, a Great Dane would be perfect for any family. Give it plenty of exercise and you’ll find yourself with a loving and affectionate new companion and family member. 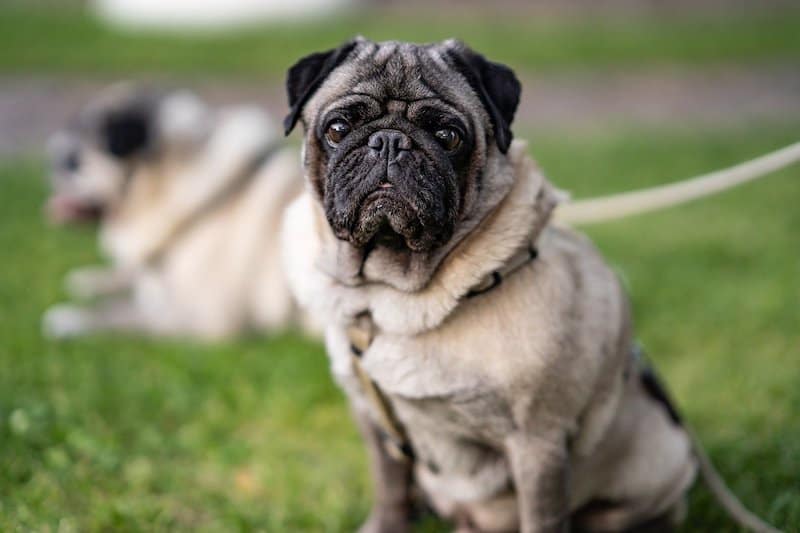 ← Previous
Are Pugs Aggressive? - The Owner's Guide to Aggression in Pugs 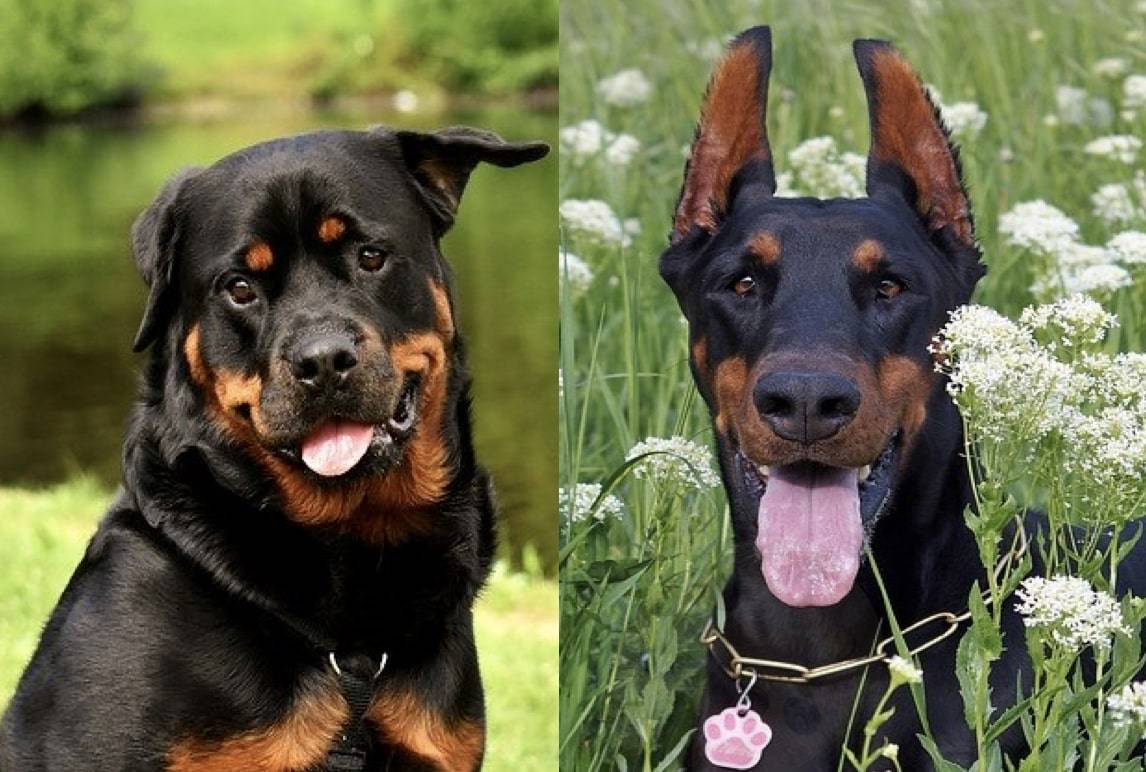 Next →
Rottweiler vs. Doberman Pinscher - A Comparison of Germany's Finest Dogs
Click here to cancel reply.