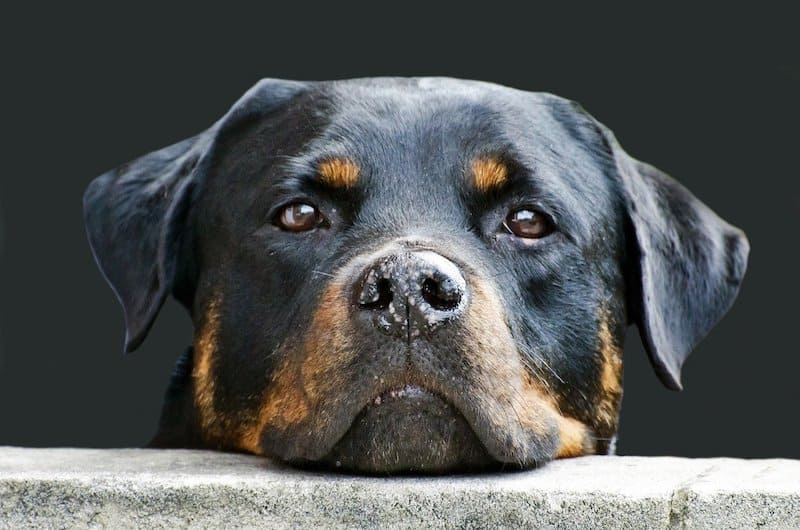 The Rottweiler is a fierce and protective dog known for its unwavering loyalty. Rotties have calm temperaments, but high confidence. As such, there are few things that can scare the Rottweiler. There’s are reason why they’re one of the top guard dogs.

And given the immense popularity of these dogs in North America (consistently in the top 10), it’s not difficult spotting a Rottweiler. With their slick black coat with tan markings, every dog lover knows what a Rottie looks like.

But did you know there are three official Rottweiler colors? Even so, there are other rarer colors such as red Rottweilers. So, if you’re wondering what kind of colors are possible with these dogs, continue reading to find out.

According to the American Kennel Club breed standard for Rottweilers, there are just three official colors on the Rottie. The organization mentions that the base color should always be black with markings ranging from rust to mahogany.

Separation of the coat’s black base and markings are clearly defined on the coat. Plus, all colored markings should be found on the dog in the following areas:

Any base color other than black results in immediate disqualification. So, diluted dark colors don’t qualify. Even so, the correct-colored markings need to be present on the black coat. In other words, white markings aren’t official.

Even for enthusiasts, it’s difficult to tell apart the Rotties based on markings. However, the black and mahogany Rottweiler will have the darkest-colored markings in all the correct areas. It should be a deep red-brownish mahogany.

Black and mahogany Rottweilers are some of the most common and popular color combos. You’ll see them everywhere. But considering how handsome they look, it’s easy to see why owners love this color variation.

The black and rust Rottweiler is also another common and popular color variation. The rust is by far the most distinctive. Though there are few breeds with rust in their coats, there’s just two dog breeds with specifically black and rust.

The rust marking is not as dark and deep as the mahogany. However, it’s not as bright and light as the tan. These dogs are just as stunning as any other official breed color and even then, few people can tell them apart.

Black and tan Rottweilers may just be the least common color of Rottweilers. But because Rotties are everywhere, it’s still possible you run into some. Tan is not a rare color among dogs. Plus, a few dog breeds are known for both black and tan.

With the same coloring, Beaucerons are often confused with the black and tan Rottweiler. In addition, the Black and Tan Coonhound only has this color combination. So while they may be rarer with Rotties, this color combo isn’t in the canine kingdom.

Though not a standard color, the Red Rottweiler may be the most exotic and interesting among all Rottie colors. And while it may be normal for owners to want a uniquely colored dog, red Rottweilers typically aren’t ethically bred.

Breeders that specifically breed for “rare” colors often ignore breeding for temperament or good health, which are factors that actually matter. Because they can charge a higher price for rarity, their goal is simply to produce more red dogs.

Still, it’s possible to naturally get a red Rottweiler in a litter. However, Rottweilers have been bred with black coats for several generations, making it highly unlikely.

According to experts, rare-colored Rottweilers are likely the result of crossbreeding. Most likely, red Rotties won’t be completely purebred dogs. Whether it’s crossbreeding with other dog breeds or Rotties with rare markings, this may produce unique colors.

But an interesting coat isn’t the only thing that may result from breeding for rare colors. In addition, these dogs may be susceptible to health problems or other hereditary issues. As a result, red Rottweilers aren’t recognized by kennel clubs.

Some of these health issues can range anywhere from eye conditions to heart issues and sometimes hip or joint problems. Standard colored Rottweilers are already susceptible to many health issues, so breeding these colors can only make it worse.

Blue is my favorite color, but it’s not a great color in the canine kingdom. A dog can become blue when he has the dilution gene. On a black coat, which most standard Rottweilers are, a diluted coat will look like a gray-ish blue.

Depending on the dog breed, the name for this color may be called blue, charcoal, slate or even gray. For instance, Frenchies with the dilute mutation on a black coat are also called Blue French Bulldogs.

For this to happen, the gene codes responsible for the melanin (black pigment) on the dog’s coat experiences a mutation. As a result, improper distribution of the “color cells” causes a dilution in the color of the coat.

However, the mutation gene is recessive, thus requiring two copies in order to produce the blue color on the coat. In other words, dogs that carry one of the two genes (the D allele or the D locus) will still have a “normal” coat color.

The reason why blue isn’t a great color in dogs is because of the many health issues that may come with it. For instance, Follicular Dysplasia is a fairly common problem seen in blue dogs, especially with Rottweilers.

Though uncommon, this recessive condition refers to a genetic cause of alopecia and poor hair quality on the coat. This is not just a Rottweiler problem, but commonly found with dog breeds such as Dobermans, Huskies and Chesapeake Bay Retrievers.

Blue Rottweiler puppies aren’t immediately born with poor hair-coat quality. Instead, through the first three years, you’ll begin to notice it gradually. The coat with be “patchy” and their skin may be dry with different colors in the affected parts of the coat.

The primary hairs of the Rottweiler may eventually shed, creating a puppy-like coat with a woolly feel. Most of the patching will be on the body of the dog, with both the head and feet being the least affected. It’s not a pleasant sight and may require vet consultation.

It’s not really uncommon for a puppy’s coat color to change as they grow older. And, Rotties are no exception. But just how much can a Rottweiler’s coat color actually change in just a few short years?

According to Dr. Winnie, there are many possibilities for this. For example, it could depend on the seasonal timing. If it’s fall time, the Rottweiler’s short double coat may be shedding the top coat in preparation for colder weather.

Most black Rottweilers have a gray undercoat. However, it’s possible that some may sport a tan or red undercoat, which may be showing through with a thinner top coat. So while it can seem like the colors are changing, the actual undercoat color is just more obvious now.

Another reason for a change in coat color may be because of genetics. It’s possible that the Rottweiler may actually carry the genes for a red or blue coat. As such, this true color may not be more obvious until the pup becomes a little older.

So if your Rottweiler puppy is changing colors as the dog enters adulthood, don’t worry too much. It’s likely not a huge issue. It’s not just with Rottweilers, but so many puppies change their coat colors in the later years.

Does it matter which Rottweiler color you decide to get? The short answer is no. In terms of personality and temperament, they’re all the same. You’ll get the loyal and affectionate dog that we all know and love in Rottweilers.

However, if you do plan to show and compete with your Rottweiler, then it does matter. In order to show your dog at AKC competitions, you must have a Rottweiler that fits the official breed standard. This means a black and tan/rust/mahogany Rottie is a must.

Rottweilers disqualified for failing the breed standard can still compete in some events, just not all. But if you don’t have plans for this and just want a great companion and guardian, it doesn’t matter which Rottweiler color you get.

If you can get your hands on a Rottweiler, I highly recommend it! They’re such amazing dogs that deserve an equally loving and affectionate family. With the right owners, it’ll be easy for these dogs to thrive.