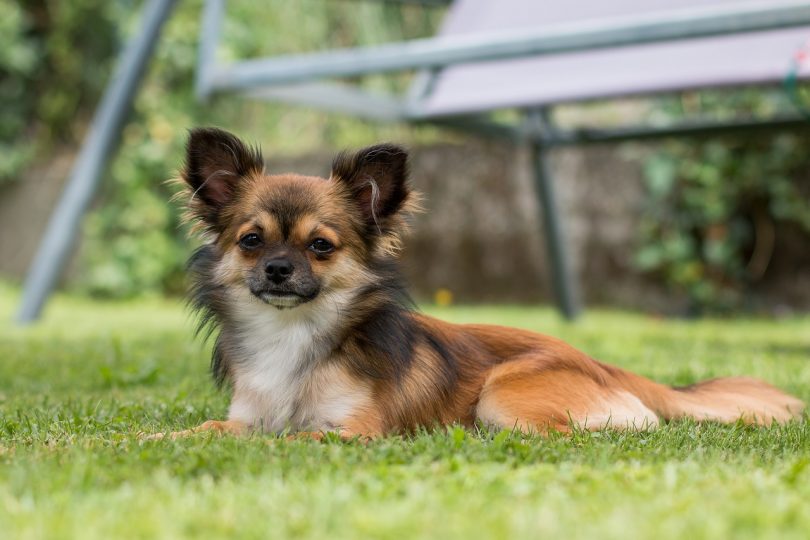 Mexico is home to the world’s freshest avocados, finest tequila and biggest fiestas. All of which, make Mexico one of the most unique and interesting countries in the world.

But did you know Mexico offers some of the coolest native dog breeds too? In fact, there are 5 amazing Mexican dog breeds the country has gifted us.

You may be wondering, just five? Although Mexico hasn’t produced as many dogs as say, Germany, these Mexican dogs make it up in pure awesomeness.

RECOMMENDED: 12 Australian Dogs from Down Under

These are all the known dog breeds of Mexico that are still in existence at the date of writing. Mexican dog breeds include the Chamuco, Chihuahua, Xoloitzcuintli, Chinese Crested & Calupoh.

Now let’s see why these Mexican dog breeds are so worthy of throwing a fiesta.

The Chamuco, also known as the Mexican Pit Bull, is undeniably the most ferocious and muscular Mexican dog breed. They’re literally called “The Devil” in Spanish, which shows just how intense and feared this breed is.

Although the Chamuco is rare and near-extinct, this legendary dog is popular among Mexican folklore and urban stories.

Unfortunately, Chamuco dogs are not popular house pets in Mexico. Instead, they’re bred to participate in illegal underground dog fights. It’s really a shame because these Mexican dogs actually make splendid pets with proper training. At least, according to the very few that own one.

Surprisingly, the Chamuco has a great temperament when properly trained and raised in a loving environment. With family, they’re very friendly and love being included in all family activities.

Needless to say, Chamuco dogs are always brimming with confidence – even around strangers. They’re smart enough to interpret a stranger’s intentions. For this reason, they’re some of the best guard and watch dogs Mexico has to offer.

What’s even more surprising is their playful nature with children. Even so, you should always exercise caution when letting your kids play with a Chamuco.

But what about all the aggressive Chamuco dogs in dog fights? Chances are, they weren’t properly socialized. It’s an unfortunate and sad situation.

The Chihuahua is undoubtedly the most popular dog breed from Mexico. They’re small, spunky, loyal and a bit sassy. These toy dogs come in at less than 6 pounds and sport their signature round “apple head.”

If you’ve ever met a Chihuahua in your life, you’ve probably been barked at. Chihuahuas are little dogs with big attitudes and don’t easily shy away from those much bigger than them.

What’s interesting about the Chihuahua breed is the variety. For example, you can find Chihuahuas of all colors, including: black, white, fawn, chocolate, gold, cream or a mix.

Some will have long hair, while others will have short hair. In fact, there’s even a rare hairless Chihuahua too! The uniqueness of each Chihuahua is all part of their charm.

Although Chihuahuas make excellent urban pets (in apartments or small space), they feel the most comfortable in the lap of their loving owner. Few dogs are as magnificent as this dog breed from Mexico.

The temperament and personality of a Chihuahua have been known to vary depending on the dog. Some will be timid, while others will be outgoing and loud. And despite dog intelligence rankings, Chihuahuas are actually quite smart.

What’s constant is their love of humans, especially their family/pack. Chihuahuas are fiercely loyal and will show it whenever a stranger gets too close to their loved ones.

A little mischievous by nature, the Chihuahua will provide you with an endless amount of fun entertainment. Their quirky personalities can really bring out the liveliness of these dogs.

Because of their pleasant temperament and low maintenance nature, Chihuahuas are perfect options for a first time or novice owners.

The Xoloitzcuintli, or “Xolo” for short, is also referred to as the Mexican Hairless Dog. As you can imagine, it’s easy to see why they’ve been given this nickname.

However, there’s much more to the Xolo than just being a hypoallergenic dog. They’re intelligent and graceful dogs with a long history dating back to the ancient Aztecs.

Xoloitzcuintli dogs come in three sizes: toy, miniature and standard. In addition, they come hairless and with coats.

However, the hairless is the more popular and known version. Plus, it’s worth noting that the coated Xolos have a sparse coat with short, flat hair.

They are some of the most robust dog breeds, having experienced thousands of years of breeding. Because they were bred through natural selection and rarely with the intervention of humans, Xoloitzcuintli dogs are not prone to many health problems.

The Mexican Hairless dogs are “people-dogs.” They love to be with familiar humans. With the right environment and an affectionate family, there are few dog breeds better than the Xoloitzcuintli.

Still, it takes them some time to warm up to strangers. It’s partly the reason why they make such great watch dogs for families.

Xolos are extremely active dogs and require plenty of physical and mental stimulation on a daily basis. Like many other active dogs, they can exhibit destructive behavior without it.

Still, the Xoloitzcuintli dogs are some of the best dogs around and I highly recommended them (if you can find one wherever you live).

Wait, what? The “Chinese” Crested is a dog breed from Mexico? That’s because these dogs were derived from Mexico’s most ancient breed – the Mexican Hairless Dog. Or, so researchers speculate.

Despite the unorthodox origin story, the Chinese Crested are fantastic toy dogs with a ton of heart and affection. They’re some of the best lap dogs and generally prefer to stay close to their owners.

These dogs aren’t your typical dog. Often times, they won’t even want to go on walks. They’re true home-body dogs that would rather be pampered at home.

Chinese Crested dogs come in two varieties: Powderpuff and Hairless. However, hairless is the dominant trait and the dogs are more popular. Powderpuffs are the same in temperament and personality, just with a soft and silky coat.

By now, you’ve probably realized they are somewhat unusual dogs. And one of the most unusual traits about the Chinese Crested is their love of heights (Say what?).

No, really. In a way they’re like cats and have often been described as “feline” dogs. If your Crestie can reach higher ground, it’s fairly common to see him attempt to get there.

A Chinese Crested is a true toy dog that loves to play with people. They’ll do tricks, come cuddle and anything else to grab your attention. If you spend time with your Crestie, they’ll absolutely love you for it.

If you’re in a household with cats or other dogs, they’ll get along just fine. These sensible dogs can make friends with just about anyone, including strangers!

One of the rarest Mexican dog breeds is the Calupoh dog, also known as the Mexican Wolfdog. These unique hybrid dogs were developed in the 1990’s through the crossbreeding of wolfs with various breeds of dog.

Though they were directly derived from wolves, they served many jobs and roles for humans. They’ve been used as sheepdogs, cattle dogs and even companion dogs in Mexico.

Calupoh dogs are strong and agile, with an uncanny resemblance to the American wolf. However, the Calupoh is much more balanced than a primitive wolf – as intended in the breeding process.

They have elongated legs to help them reach amazing speeds once in full stride. In addition, their strong head, neck and skull make them powerful dogs by nature.

Unfortunately, little information has been published about these experimental dog breeds. Still, they’re fascinating and one of the most interesting dog breeds to come out of Mexico.

Surprisingly, the Calupoh dogs have very stable temperaments and are relatively easy to handle with an experienced trainer.

Not only are they devoted and loyal dogs, but they love their family like any other dog breed. Just because they look like wolves, doesn’t mean they’ll act like them.

If properly socialized (early on), they can easily coexist and even thrive with other dogs in the family. This may be their inherent “pack” instincts from the wolf side.

Although they generally play well with humans, they can appear aloof around strangers. For this reason, the Calupoh should make a formidable guard and watch dog.

There are currently millions of stray dogs living in Mexico – on the beaches or in the cities. According to the Yucatan Times, roughly 70% of the 18 million dogs in Mexico live on the streets (highest in Latin America).

Why is this a problem? Well, because in just Mexico City, authorities capture and kill roughly 20,000 stray dogs per month. Also, an estimated 1.2 million strays live in Mexico City alone. This is a huge problem.

Not only do these strays struggle to live on a daily basis, but they’re climbing a severely uphill battle. Without access to even basic care, these dogs are battling with diseases, hunger, dehydration and severe heat.

This is perhaps the saddest part. On top of everything I mentioned, humans are probably the deadliest threats to Mexican street dogs. That’s right, people, like you and me!

If you search the internet, you’ll discovered that these dogs have been tortured by kids, killed (for sport) and treated as literal trash (tossed off boats into the water). The worst part is that there are no animal rights laws in Mexico – they’re ambiguous at best.

Because these stray dogs were treated so poorly, it’s no surprise they’ve developed animosity towards people.

In some cases, strays have even attacked and killed innocent people. Because of events like these, humans have become even more hostile. And, this vicious cycle continues.

Fortunately, there are ways you and I can help. First and foremost, educate yourself on the situation in Mexico.

If you’ve read through this segment of the article, then that’s a great start. More information can be found with a simple Google search.

Not everyone will be like Edgardo Zuniga, who travels around Mexico and has saved over 400 dogs. And, certainly no one expects you to be so.

However, there are tons of charities and organizations aiming to find homes for stray Mexican dogs before they get caught and put down.

My favorite charities and organizations:

A small donation may go a long way in saving a dog’s life. And if you’re up for it, you can even adopt one of these strays! With our help, hopefully we’ll get to see more stories like this. Thank you for reading and sharing.