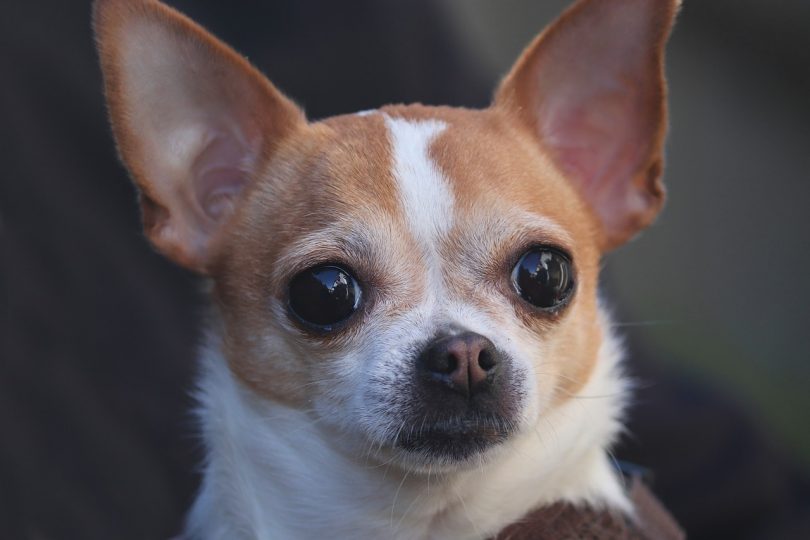 Sassy and charming, the Chihuahua is one of the world’s most popular lap dogs. Whether you’re a curious owner or a potential chihuahua parent, you may be wondering: are Chihuahuas smart? How smart are Chihuahuas?

According to canine psychologist Stanley Coren, Chihuahuas are fair or below average for working/obedience intelligence. In fact, they’re the 125th smartest dog breed as shown in the obedience trials. But just because Chihuahuas ranked low doesn’t mean they aren’t smart dogs.

There are a lot of factors to consider when determining true dog intelligence. Let’s examine this age-old question and discover why these dogs are smarter than you think.

RECOMMENDED: 100 Smartest Dogs in the World

The renowned canine psychologist asked 199 obedience trial judges from the Canadian and American Kennel Club to participate in his research.

Here’s what the criteria was based on:

Only dog breeds with at least 100 responses qualified for Coren’s final dog intelligence rankings. And because Chihuahuas are one of the 40 most popular breeds, they had plenty of responses.

The criteria in which Coren used to measure dog intelligence was met with a lot of criticism and skepticism at first – and rightfully so.

We believe there’s much more to dog IQ than just obedience and work ethic. Still, it’s a great starting point and reference for us when debating on this topic.

How the Chihuahua Performed

Chihuahuas ranked in the bottom half of the dog breeds. Out of 138 qualified dog breeds, the Chihuahua ranked 125th. Clearly, not as great as most people would think.

Classified in the “fair intelligence” category, the Chihuahua was able to learn a new command with just 40 to 80 repetitions.

On the other hand, Chihuahuas would obey a known command on the first attempt with a 30% or better success rate.

For reference, other popular dog breeds in the same intelligence category as the Chihuahuas include: the Pug, French Bulldog, Saint Bernard and Maltese.

Still, they ranked higher than other dog breeds like the Beagle, Chow Chow or Bloodhound.

As mentioned, Chihuahuas were labeled “below average” in Coren’s studies. But how did they compare to other dog breeds? And, what was the average dog intelligence like?

The “average” dog needed just 25 to 40 repetitions to learn a new command. They’re almost twice as fast at learning commands than the Chihuahua.

In addition, average dog breeds can successfully obey a known command on the first try with a 50% (or better) success rate.

These numbers aren’t significantly better than the Chihuahua’s. However, they are better.

And for reference, popular average dogs include: the Australian Shepherd, Siberian Husky, Havanese, Great Dane and the King Charles Spaniel.

Owners: Is Your Chihuahua Smart?

Now that we know Chihuahuas may not be the most obedient dogs or the quickest learners, we can’t rule them out just yet.

To really gauge how smart a Chihuahua can be, we asked real owners. So, we surveyed the popular Chihuahua sub Reddit forum for responses.

Here’s what the Chihuahua owners had to say:

1. Bathori says [NO]: “This is Rocket. 2 weeks ago he ate a rock. This week he ate a plastic bottle cap. Handsome. Not smart. (Pet insurance saves the day)”

2. Anonymous says [YES]: “Chihuahuas are generally recognized as more intelligent than average. My guy knows upwards of 15 tricks and recognizes tons of different words. If you want to keep it in your purse like a toy, i’m sure any dogs’ cognitive abilities would suffer. But they are very intelligent, learn quickly, and adapt fast.”

3. Viktorka14 says [MIXED]: “My little [Chihuahua] dog ​​is the most intelligent, but sometimes he does not recognize his own tail.”

4. Lunchtime1 says [YES]: “My Chihuahuas are smart and listen extremely well! She has since birth. The thing with Chihuahuas is they only like one or two people, but the people they love they are soooo protective of. They love to be loved and cuddle.”

5. Rainbowlu14 says [YES]: “My husband and I have 2 chi’s. I’ll admit we’ve spoiled them. But they are great dogs. Loyal, smart and obedient when taught. Socializing is key. Bring the dog around kids and other dogs.”

6. Cawkatiel says [YES]: “So far, he is the smartest little thing I’ve ever met. First thing I taught him was to come with called and he nailed it as well as walking on a leash, my husband and I are currently house breaking him and crate training.”

7. Anonymous says [YES]: “Truth is, chihuahuas are SUPER smart and will listen to you if discipline them. They’re wonderful, healthy, loyal, playful, adorable little dogs.”

8. 1234 says [MIXED]: “I have two Chihuahuas. The older male we adopted at 12 weeks old and was easy to pad train. He’s very smart. The other guy we adopted, we assume to be about 8 weeks and, well, is kind of a dumbo. I’ve tried everything to pad train him, but he still will not use the pads.”

9. Scotty5x5 says [NO]: “They are not the smartest dogs but are completely trainable with some repetition. Try to avoid buying a dog from a bad breeder.”

10. Cuuun says [YES]: “I wouldn’t say that they aren’t smart! My Chihuahua outwits me and other dogs on a regular basis.”

Additionally, two more owners mentioned that they have mixed results concerning intelligence in their Chihuahuas.

We understand that this is a very small sample size. Plus, there may be some bias in there. Even so, we cannot deny these owners’ opinions.

Why Chihuahuas Ranked Low in Intelligence

So we have owners saying Chihuahuas are smart, while Coren’s dog intelligence test says otherwise. What could possibly cause the discrepancy?

Stanley Coren’s dog intelligence rankings were primarily based on obedience trials. This means that the top performing dogs, such as the Border Collies, were more likely to obey known commands.

It’s difficult to standardize an IQ test for dogs because different dog breeds have different motivators.

Border Collies are more likely to comply because they love to work and will often obey commands for the sake of “working.” Chihuahuas, on the other hand, are different.

Chihuahuas are known to be stubborn dogs. It doesn’t help that they’re strong-willed too. They won’t necessarily obey your commands for the sake of obeying.

In other words, Chihuahuas are motivated by other things. One owner gives an example of what her stubborn Chihuahua often does:

They can be sooo stubborn!! My chi will protest during his walks and not budge no matter what I say. In the end I just carry him home..

If you’re having difficulties with obedience training, it’s likely your approach and not the dog. With the right approach and understanding of these dogs, training can be as easy as with any other dog breed.

Never try to force your Chihuahua into doing something. Coercion is the quickest way to bring out the stubborn nature of a Chihuahua.

They don’t respond well to scolding or punishment. Instead, use positive reinforcement – it definitely works best with most dogs, including Chihuahuas.

One Reddit user gives some advice for training Chihuahuas:

Be patient with them. I find the breed to be highly intelligent, but stubborn. I was firm with my Chi. NEVER use physical aggression to train them. A firm yes or no works with positive reinforcement. Be prepared for lots of snuggles & love.

Remember, you’re not a drill sergeant (and you don’t want to be!). Rather, you’re a friendly and helpful guide when it comes to obedience training.

It does take some patience and consistency, but this positive approach will make learning much faster and more enjoyable.

It’s not that Chihuahuas don’t love their owners enough to obey them. As a matter of fact, they’re some of the most affectionate dog breeds.

However, these dogs have different motivators. They aren’t serious working dogs, like with a German Shepherd. They were bred to be lap dogs and companions.

Chihuahuas will often develop strong bonds and attachments with one member of the family. For this reason, they want nothing more than to protect and defend their loved ones.

These dogs are motivated by their loyalty and devotion to the pack. In my opinion, this is a much better quality than being able to learn and perform tricks on command.

Though small, they show no fear when they sense danger to the pack (owner). It’s also another reason why they’re serious barkers.

And if you’re looking for dogs that don’t bark, check this article out. Chihuahuas may not be a good fit if you can’t stand it.

Is a Chihuahua For Me?

All dog breeds, including the Chihuahua, are more than capable of providing everything you need (and so much more!).

Never bring home a dog based on how “smart” they are. All dogs are capable of providing most owners with what they need.

Instead, you want to pick a dog breed based on their temperament and personality.

Chihuahuas are unfalteringly loyal dogs. And if you’re looking for a great lap dog with a chance to make a best friend for life, the Chihuahua is perfect for you.

Let us know if you own a Chihuahua. Is your Chihuahua smart? Leave a comment and let us know in the comments section below!