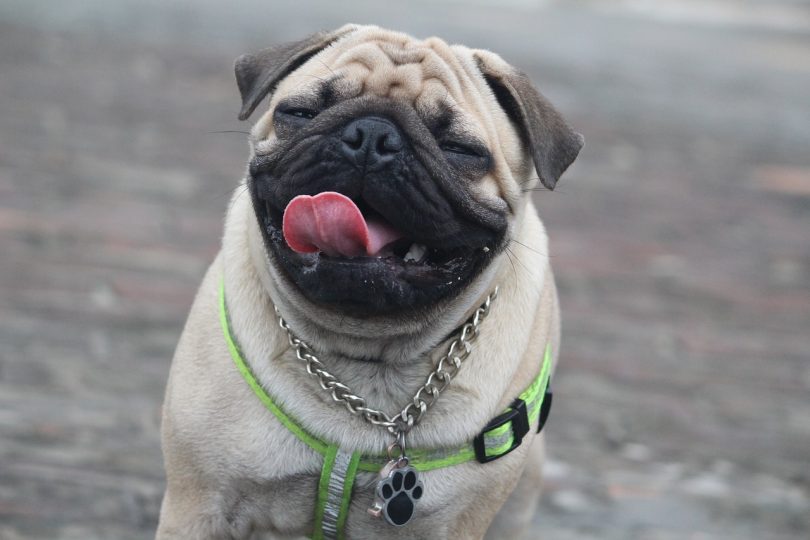 If you’re looking to bring home a Pug, there are certain things you should be researching. Everything from puppy shots, to health issues and diet regimen are essential for a healthy Pug. But as potential owners, you may be wondering about their intelligence.

So, are Pugs smart? According to Stanley Coren, Pugs are the 108th smartest dog breed out of 138 qualifying breeds. This places them in the “below average” category for canine intelligence. Despite this, they’re intelligent in other ways, such as having high adaptability and instincts.

To understand why Pugs ranked so low in Stanley Coren’s intelligence trials, we must first understand how we measure dog intelligence in Pugs. Let’s further explore what actually makes Pugs smart.

Stanley Coren, the famed researcher and professor of canine psychology, organized a series of obedience trials to determine the “intelligence” of various purebred dog breeds.

He did this by contacting all the North American obedience trial judges from the American and Canadian Kennel Club at the time. Surprisingly, he received 199 responses!

In his request, Coren asked the judges to rank dog breeds by obedience performance – based off his criteria. With such data, he was able to formulate a list of the smartest dog breeds. Here’s the criteria that he used:

In addition, the recognized breed needed at least 100 assessments to qualify for the smartest dog breeds list. Pugs were both popular and recognized at the time, so they made the cut.

And although we don’t think this is a great method of measuring dog intelligence, it’s a good place to start.

How the Pug Performed

With at least 100 Pugs participating, they were placed into the below average or “fair” intelligence category. In all fairness, they’re at the top of breeds list in that category.

This meant that Pugs were ranked the 108th smartest dog breed out of 138 dog breeds that participated.

Dog breeds in the below average category required 40 to 80 repetitions to learn a new command. This may seem like a lot, but it’s because of reasons we’ll discuss later in the article.

On the other hand, Pugs did not perform much better with obedience. The Pugs were able to successfully obey a known command on the first try with a 30% success rate.

There’s nothing wrong with being in this category. Some of the world’s most popular dogs are considered “fair intelligent,” including the Maltese, French Bulldog, Saint Bernard and the Chihuahua.

Pugs vs. The Average Intelligent Dog

Being in the “below average” intelligence category, Pugs (obviously) performed worse than the average dog. But how did they actually compare to the average dog breed?

These average dogs are able to understand and learn new commands with 25 to 40 repetitions. Furthermore, they will obey a known command on the first attempt 50% of the time (or better).

This doesn’t seem too far off from how the Pug performed. And because Pugs performed at the top of their category, they’re probably very close to dogs in the average category.

How Smart is Your Pug?

In order to truly understand how smart Pugs are, we asked real Pug owners. From the popular Pug sub Reddit forum, we were able to survey and collect responses from owners.

It really depends on the individual dog. Some Pugs are just sharper than others. In addition, Pugs can be smart in different ways, as you’ll see from the responses. Here’s what Pug owners had to say to the question:

1. Mommycazken says Yes: “My pug is extremely smart, but in a very sneaky and mischievous way. That said, they are so funny and live to love their humans. If you want a true companion dog, there is no love like pug love!“

2. Droppedwhat says Yes: “Smart but a bit cat-like in the attitude. As in, if they don’t feel like doing something, they probably won’t.”

3. Stump2003 says Yes: “Pugs can be smart…Tank found out we’d chase him if he got a shoe from the hallway, so if got in there he would hide one shoe for later and then taunt you with the first shoe. After you’d chase him down and gotten the first shoe back, he would magically appear with the second shoe ready for more fun.”

4. 9ermtb2014 says Yes: “They’re stubborn as hell, but quite smart. Some of them can be pretty damn sneaky and quiet too when getting in trouble.”

5. Unclebottom says Mixed: “I don’t think they’re dumb at all. They may not solve problems the way a Border Collie would, but they do solve them.”

6. Showshoe says Mixed: “I would say it varies. My pug was only motivated by food and if she thought there was a chance for a treat she would only focus on the treat. She was extremely hard to train.“

7. Pickleyourpoison says Mixed: “I think you’d be surprised what they can learn. Both my pugs know sit, wait, stay, down, bed and leave it (with varying success due to distractions).”

8. Elisha411 says Yes: “They are very smart but just like people you may stumble across some not so smart… my pug is sassy but very trainable.”

9. Shadowgli says No: “Spend a day with them, between the Fawn one standing for extended periods of time facing a wall and the Black one just being spastic, you would love them, but have no doubt they would lose a game of memory to a goldfish.”

10. Lazynetflix says Yes: “Are you sure they aren’t just stubborn? lol Most pugs I’ve known tend to be super smart but also super duper stubborn!“

Collecting responses from 10 Pug owners is a small sample size. However, most Pug owners on the forum agree that their Pugs are indeed intelligent dogs. Out of the 10, six owners (60%) believe their Pugs are smart.

Three owners said they have mixed results – they’re not dumb, but wouldn’t call them smart either. On the contrary, only one owner believed her Pug was not intelligent.

Why Pugs Rank Low in Intelligence

How can it be that so many owners believe their Pug to be smart despite how they performed in Stanley Coren’s intelligence trials? Let’s examine why they scored so low on the test.

Coren’s dog intelligence tests is really a measurement of obedience. There’s a reason why he contacted obedience trial judges to help out. Though there’s some merit to how fast a dog learns a new command, it doesn’t tell the full story.

And if you don’t already know, Pugs are some of the most stubborn dog breeds. With that said, it seems reasonable that Pugs don’t always obey a known command on the first try.

Our Pug is a very smart dog. He definitely knows what I’m asking, he just REFUSES to listen!

Most Pug owners will tell you the same thing. They agree that Pugs are smart, but not in an “obedient way.” Sometimes, they want to do it on their own and/or have it their way.

They’ll certainly have their stubborn streaks and they can be very independent-minded dogs. One Pug owner expands on this idea, saying

My pug makes it very well known when she doesn’t want to do something, but she still listens very well. She just huffs and puffs the whole time because she’s not happy about it.

It’s not a coincidence that the lowest scoring dog breeds also happen to be some of the most stubborn breeds in the world. Just because your Pug doesn’t obey your command doesn’t mean they don’t understand!

Reasons Why Pugs Are Smart

Though they may not be the most obedient dogs, Pugs are smart in other ways. They’re not “obvious” smart dogs, such as the Border Collie who learns and obeys because they love to work.

Instinctive intelligence refers to the special ability or innate skill that a certain dog breed was bred for. All dogs were purpose-bred for specific roles and jobs in society. These “dog jobs” can be in retrieving, herding, hunting and more.

For example, Blue Heelers were bred to herd livestock. The fact that they’re born with instincts to nip at the cattle’s heels and push them in directions is their instinctive intelligence. They didn’t need human training for this.

Similarly, Pugs were bred to be companions. Companionship is an instinctive intelligence too. And they were so good at their jobs that they were reserved primarily for Chinese Emperors and royal elites in ancient China.

Pugs are also fantastic at communicating with humans because the best companion dogs needed to be! They primarily communicate with their emotions and it’s scary effective.

Sure, they can learn all the basic dog commands, but being able to convey emotion is what makes them stand out. There are few dog breeds that are as emotionally transparent as the Pug – thanks to their instinctive intelligence in companionship.

The final component of dog intelligence is adaptive intelligence. Arguably the most important type of intelligence, it refers to the dog’s ability to learn for itself. It can mean solving problems and learning from mistakes.

One Pug owner tells us a story about his Pug, saying:

My pug doesn’t look smart, but she’s one clever dog. She’s learned to give me puppy eyes to get me over to her. Once I get there, she’ll lead me to the food cabinet for treats. Sometimes I think she’s training me.

Jason’s Pug learned what it took to get her owner off the couch and give her some attention. Then she would communicate to him what he needed. This story is a clear sign of high adaptive intelligence.

There are many examples just like this. While not every Pug will be highly adaptable, a good amount are. Next time you run into a Pug owner, ask them for stories just like these!

As for tricks and commands, Pugs are generally difficult to deal with. But that doesn’t mean they’re not capable of learning them. They just need the right motivators.

Not all dog breeds or individual dogs have the same motivators. Some enjoy the mental stimulation of obedience training (such as the Australian Shepherd), while others need extra external motivation – such as delicious treats!

Pugs tend to fall into the latter category. Depending on your dog, you’ll need to test different motivators to see what works best. Many Pug owners claim that food is a great way to get their Pugs to obey, especially if they’re food-driven dogs.

One Pug owner agrees, saying “my pug was only motivated by food and if she thought there was a chance for a treat she would only focus on the treat.” She adds, “most pugs are very happy just getting pets and treats. I wouldn’t get a pug if I wanted a dog to train doing tricks.“

In the end, it doesn’t really matter if you have a “smart” dog breed or not. What you should be really considering is whether the Pugs temperament and personality matches yours.

Nearly all dogs can understand at least 150 different words. That’s more than enough to provide you with everything that you’ll need in a loving companion and canine friend.

So, do you own a Pug? And if you do, tell us just how smart your Pug is. Let us know in the comments section below.