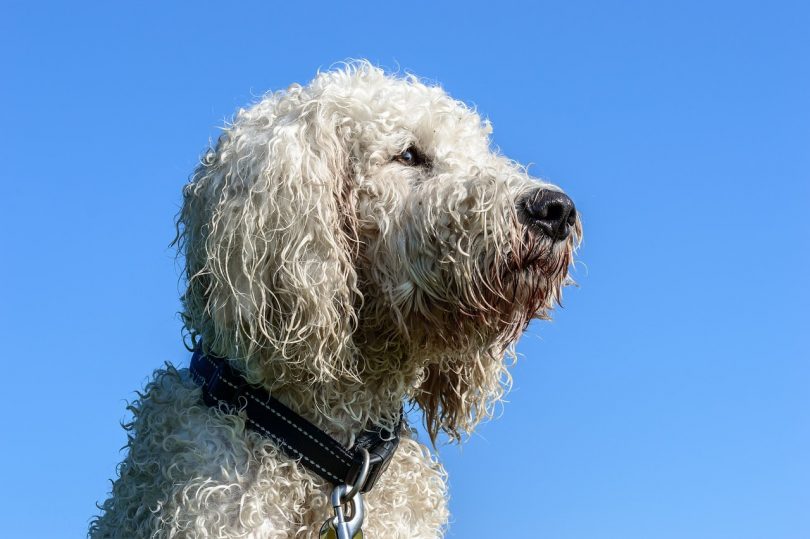 If you’re looking for a mixed dog breed, the Goldendoodle is one of the best. This Golden Retriever Poodle mix is an affectionate companion and an even better family dog. But curious owners may be wondering if they’re actually intelligent dogs.

Unfortunately, mixed breeds didn’t participate in Stanley Coren’s dog intelligence trials. But by using his research on the Goldendoodle’s parent breeds, we can still estimate just how smart these crossbreeds are.

How We Measure Dog Intelligence

As mentioned, Stanley Coren’s obedience trials only involved recognized purebred dogs. He contacted all the obedience trial judges from the Canadian and American Kennel Club for his research.

Nearly 200 of them responded, accounting for almost half of all obedience judges in North America at the time.

After collecting the responses, Coren only considered breeds with at least 100 evaluations into his rankings. Additionally, mutts like the Goldendoodle didn’t participate.

The criteria was met with a lot of criticism. However, they are the most reputable scientific research we have on dog intelligence – even today.

We don’t necessary agree with this, but it’s an excellent starting point for ranking the smartest dog breeds in the world.

Results of the Poodle & Golden

Because the Goldendoodle is the cross of a Golden Retriever and Poodle, we must first look at how these individual parent breeds performed.

Needless to say, both breeds passed with flying colors. In fact, both the Poodle and Golden Retriever made it to the top 5 ranking!

According to the trials, Poodles are the second smartest dog breed. On the other hand, Golden Retrievers are the fourth most intelligent dog breed in the world.

Both dog breeds can learn a new command with just 5 repetitions or less. They will also obey a known command on the first try with a 95% (or higher) success rate.

Making this ultra-exclusive intelligence class is no easy feat. Only 10 dog breeds are in the same league.

Now that we know both the Golden Retriever and Poodle rank at the very top of the dogdom, how smart are they compared to others?

For reference, the average dog breed – that is, with “average” intelligence, will need 25 to 40 repetitions to learn a new command. Compared to the Goldendoodle’s parent breeds, they need 5 to 8 times more repetitions!

Furthermore, average dogs will obey a known command on the first try with just a 50% success rate. This means the Golden and Poodle are nearly twice as likely to get it right on the first attempt.

What’s surprising is that average dogs are some of the most iconic and popular breeds in the world. These dogs include the Australian Shepherd, Great Dane, Siberian Husky, Bichon Frise, Shiba Inu and more.

Owners: Is Your Goldendoodle Smart?

With limited data on the Goldendoodle’s obedience performance, asking real owners is perhaps the best way to gauge how smart one actually is.

So, that’s exactly what we did. We surveyed real owners on the popular Goldendoodle sub Reddit to ask them this question.

Here’s what Goldendoodle owners had to say:

1. Userunknown26 says [YES]: “Got our first Goldendoodle (Henry) 6 days ago and it’s been the best!!! He’s so intelligent, but always distracted.”

2. Alose says [YES]: “He is extremely intelligent and affectionate. From about 8 months to 18 months he was extremely hyper. Now he looks forward to his daily walk, and some play time, but otherwise is content to lay around all day.”

3. Amazingistired says [YES]: “He is extremely intelligent. It was very easy for him to learn tricks, he is always interested and involved in things that are going on, and he looks at people in the eye all the time to communicate. He occasionally watches tv and immediately recognizes animals.”

4. Eyetheswan says [YES]: “My gosh these dogs are so intelligent. BUT almost everywhere I read, people are talking about how much energy their Goldendoodle has and how sometimes it can get out of control.”

5. Yokeactuator says [YES]: “My Goldendoodle is the sweetest and smartest floof of a dog I’ve ever had. We’ve had her a little over a week and she’s been doing great with training!”

6. Redditforabookreport says [YES]: “She’s an incredible dog. She’s so smart that she taught herself how to climb a pool ladder last summer.”

8. 3rdinput says [YES]: “I heard Goldendoodles were smart but nothing prepared me! My pup is 10 wks old. He was crate trained from the first night. Fetching and releasing. All ready sitting on command. And I came home last night and my wife has him shaking hands!”

10. Shoopdaw00p says [YES]: “She just seems like she is too smart and doesn’t want to ever listen to commands. We feel like we didn’t get the most obedient dog out of the litter. We still love her.”

Asking just 10 Goldendoodle owners is a small sample size. However, this batch of responses does a good job describing the intelligence of these mutt dogs.

Out of 10 real owners, 9 (or 90%) of them said that their Goldendoodle is extremely smart. Just one owner believed his Goldendoodle wasn’t that intelligent.

We’re confident that if we surveyed even more Goldendoodle owners, we would get similar results.

Why Goldendoodle Are Smart

There are a lot of reasons why the Goldendoodle is a highly intelligent dog breed. There’s so much more to these dogs than just excelling in obedience tests.

According to real owners, these are the other factors that they believe make these mutt dogs stand out in terms of intelligence.

The Goldendoodle is one of the best family dogs you can own. They’re intelligent enough to understand that infants and toddlers are fragile, yet important to the pack (family).

For this reason, Goldendoodles are inclined to be extra careful around small children. And as the kids grow older, they’ll develop into some of the best playmates for them.

Goldendoodles have a keen sense of their environment and everything that’s going on in it. They seem to know when you’re down or happy – and they’ll approach you accordingly.

This is a sign of high adaptive intelligence, which refers to a dog’s problem solving ability and social awareness. Dogs that can learn for themselves, such as Goldendoodles, are highly adaptive.

If this isn’t a sign of a highly intelligent mutt dog, I’m not sure what is. You can always count on a Goldendoodle to celebrate with or comfort you.

Goldendoodles are adept at communicating with humans (as well as other dogs). There’s a reason why they’re social and outgoing dogs – because they’re effective communicators.

Many owners will tell you they have an uncanny ability to communicate their ideas, desires and fears. Plus, they usually find clever ways of communicating with you.

Goldendoodles know what they want and will always find a way to let you know. Our 2 year old will lead us to the leash, ball, frisbee or food storage with her facial expressions.

For example, if your Goldendoodle wants a certain treat, expect them to grab your attention and slowly lead you to the place the treat is stored.

Depending on your dog, these “signals” can be more complicated and downright brilliant.

In order for your Goldendoodle to be excellent communicators, you (the owner) need to put in some work too. If you teach your dog as many commands and words as possible, it’ll make their communication more effective.

Sometimes, intelligence can be seen in the actions of the dogs. There are a number of “smart things” that Goldendoodles do. Here are some real examples from real owners.

One Reddit user tells us a story about her Goldendoodle (named Noodles):

“Usually when she goes to pee, I open our front door and say, “go pee pee”. She pees and comes back in or she lounges around on the grass a bit, then comes back in.

This time, she went straight to eating grass when she got outside, so I shouted, “Noodle! Stop eating grass and go pee pee!”

She proceeded to continue eating grass, squatted, peed, and kept eating grass. Didn’t even move a single inch. This is the first time I witnessed her being a little smart ass that I found both cute and funny. Luckily she hasn’t done this again, but just wanted to share a moment!“

Another Reddit user explains his frustrations with training an intelligent Goldendoodle:

“The intelligence is definitely a blessing and a curse. Last night my goldendoodle puppy got a hold of a sock. We’ve been practicing drop it with treats, so I try to tempt him with a treat to give it up.

He knows I’ll take the sock, so he tries for a solid minute to take the treat with the sock still in his mouth.“

Are Smart Goldendoodles For You?

There are a lot of reasons to bring home a specific dog breed. But I don’t think intelligence should be a factor. The truth is, all dogs – pure or mixed – are capable of providing you with everything you need in a dog.

Unless you need a dog breed for a specialized task, every dog breed is capable of thriving as a pet, companion and friend.

These specialized skills can be hunting & pointing, herding, searching, police work or retrieving. And in that case, there are breeds that specifically excel in those areas.

In my opinion, most dog owners should be looking for breeds based on temperament and personality. Does the Goldendoodle match your personality and needs?

Why Get a Goldendoodle?

Goldendoodles are gentle and calm dogs when they need to be. They also know when the time is right to be energetic and active.

For the most part, these dogs are very affectionate and have an easy-going personality.

They’re comfortable lounging around with you, but also enjoy a nice stroll through the dog park. As social creatures, Goldendoodles are friendly with all humans and animals. They can literally befriend anyone in a short time.

However, if you’re looking a guard dog (or watch dog), these dogs aren’t right for you. Sure, they have good size – but they’re as friendly as a butterfly.

Instead of protecting your house, they’ll probably try to lick your intruders. But on the bright side, they make decent apartment dogs because they’re friendly and don’t really bark.

Some Goldendoodles rarely shed (and are classified as hypoallergenic dogs) so they can be great for allergy-sensitive owners. Though, shedding severity depends on the dog.

If after all this, you still believe they’re right for you – go for it! There’s a reason why they’re one of the most popular mixed dog breeds!

Do you own a Goldendoodle? If you do, is your Goldendoodle smart? Let us know in the comments section below!