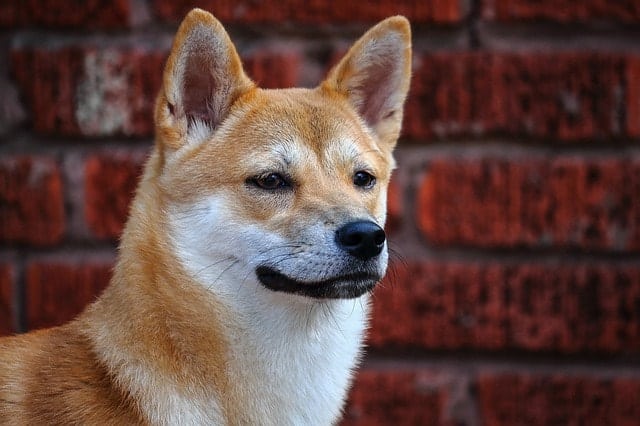 The Shiba Inu is undeniably the most iconic and popular Japanese dog breed today. They’re bold, lively, attentive and alert small dogs. However, just how intelligent can these little dogs be?

So, are Shiba Inus smart dogs? Shiba Inus are “average” intelligent dogs. For working & obedience intelligence, they’re ranked the 93rd smartest dog breed out of 138 qualified breeds. However, Shibas are intelligent in other ways. For instance, they excel in adaptive intelligence while retaining superb hunting instincts.

It doesn’t matter how bad they performed on intelligence tests. There’s no denying the cleverness of the Shiba Inu. That being said, why did the Shiba perform so “poorly” compared to other dogs?

Like we mentioned, the Shiba Inu is the 93rd most intelligent dog breed (out of 138 breeds). Though this may seem very low, we must first understand how we came up with this dog intelligence ranking.

This list of smartest dogs was created by canine psychologist Stanley Coren. He conducted his research trials with the help of 199 obedience trial judges from both the American and Canadian Kennel Club.

Based on his own criteria, Coren asked the judges to evaluate and rank as many dog breeds as they could. His criteria was based on two main factors:

Although Stanley Coren received responses from hundreds of dog breeds, not all breeds made the cut for his final list.

As a matter of fact, only dog breeds with at least 100 assessments were qualified for his rankings. Considering how popular the Shiba Inu was, they made the cut, easily.

In addition, only dog breeds officially recognized by the American and Canadian Kennel Club participated. Unfortunately, this means no mixed dog breeds.

How the Shiba Inu Performed

The Shiba Inus didn’t perform too poorly, but they didn’t perform well either. They were just…average. There’s nothing wrong with being average because all dogs are smart enough for most owners.

Average meant that the Shiba Inu was able to learn a new command with just 25 to 40 repetitions. For reference, “below average” dogs needed 40 to 80 repetitions – nearly double what the Shiba needed!

On the other hand, the Shiba could obeyed a known command on the first attempt with a 50% or greater success rate. Not bad at all!

The smartest dog breeds in the world are in a class of their own. Conveniently, they’re also the top 10 most intelligent dog breeds. But how do they compare to the Shiba Inu?

The most intelligent dogs were able to learn a new command with less than 5 repetitions. This is at least five times faster than the Shiba Inu.

Even more impressive, these smart dogs will obey a known command on the first try with a 95% or higher success rate. They’re some of the most obedient pets in the world!

For reference, other dog breeds in the top 10 category are your German Shepherds, Poodles, Rottweilers, Australian Cattle Dogs and Golden Retrievers.

Is Your Shiba Inu Smart?

When it comes to dog intelligence, there’s a lot of room for variance. So, to really gauge how intelligent Shibas really can be, we asked real owners if they believed their dog was smart.

By surveying the popular Shiba sub reddit forum and other forums, we were able to collect great responses from Shiba owners. Here’s what they had to say:

1. Tyrion_stark says Yes: “He is a tad aloof at times, but he wants to know what we are doing (and involve himself when he deems necessary). He is incredibly intelligent, passed his STAR puppy and canine good citizen classes with ease.”

2. Gr8grafx says Yes: “They are whip-smart but not necessarily trainable. Ours were obedient–knew how to sit, come and heel but wouldn’t necessarily do it unless they wanted to.”

3. _ap says Yes: “So my Shiba is about 4 years old now, and she’s grown to be an extremely intelligent pup who knows how to get exactly what she wants.”

4. Tengufr says Yes: “Ginko is a non neutered male, he’s as stubborn and intelligent as any other shiba. We educated him, with some aspects that could may be seen as carelessness by some dog owners.”

5. Rhombomere says Yes: “Haru can be like this too at times. While training can help, I think that this is part of the price we pay for having intelligent, curious, and willful dogs.”

6. Hairofbrown says Mixed: “I have a smart shiba and a dumb shiba. The dumb one only cares about garbage, protecting his turf from other dogs and playing ball. He’s the only shiba I know who has no hunting instinct.”

7. Bazzer68 says Yes: “I think Kali is pretty smart. She knows all her toys by name, though she doesn’t seem to interested in them as she gets older (11 y.o. tomorrow).”

8. J4yw4l says Yes: “Shibas are very smart, they will often surprise you. We have had ours for about 2 years and she continues to surprise us.”

9. Sakurastardust says Yes: “So, I’ve had my black/tan male puppy, Yusuke, for a little over a week. He’s definitely smart, and learned sit and down in about 2 days (even when outside with distractions!).”

10. Shadou_wolf says Yes: “Shibas are pretty damn smart there is just so many words my dog knows without me ever teaching him.”

We’re aware that 10 owners is an extremely small sample size, but the general consensus says that Shibas are, in fact, smart dogs. Out of 10 owners, 9 believed Shiba Inus are intelligent dogs.

Only 1 owner experienced mixed results, where one Shiba he owned was intelligent while the other was not. Obviously, there may be some bias in these responses, but we can’t ignore these answers.

It’s a little unfair to standardize a dog intelligence test using just obedience and working intelligence. Though we think there’s a correlation between dog IQ and how fast a breed learns commands, it doesn’t tell the whole story.

Shiba Inus are some of the most stubborn dog breeds. In fact, Shibas tend to challenge their owners every chance they get. So, it makes sense these dogs don’t always obey commands on the first attempt.

But just because your Shiba Inu doesn’t obey your command doesn’t mean he or she doesn’t understand what you’re saying.They may understand, but they don’t necessarily care to obey in that moment of time.

He’s the most particular dog I’ve ever met. Stubborn, bull headed boy. You could be in the middle of a great play and he’ll just switch off and walk away. You could have his favorite treat in your hand but if he doesn’t feel like coming he won’t.

Because of Coren’s intelligence test that relies so heavily on obedience, it’s no surprise that Shiba Inus performed so poorly. The biggest takeaway is that they’re not as average as the “experts” claim.

So far, we’ve made a pretty good argument for why current dog IQ tests don’t accurately measure the intelligence of the Shiba Inu.

But if it’s not obedience and working intelligence, what actually makes these Japanese dogs so smart?

It’s been well documented that Shibas are incredibly strong-willed dogs that often go on their stubborn streaks.

She’s [Shiba] too smart for her own good. I think she’s stubborn because she understands what she can and cannot get away with.

In fact, it’s been well documented that many stubborn dogs are some of the most intelligent dogs in other areas of dog intelligence (instinctive and adaptive intelligence).

It’s just that stubbornness and obedience don’t get along well together. At least, as much as owners would like.

Once you find the right motivators for your Shiba Inu, they’ll quickly and eagerly learn. But it’s not as easy as just telling you what your dog is motivated by. Motivators can vary depending on dog.

For example, your Shiba may react well to food (treats), while others react well to play (fetch). Be patient and take your time to figure this out – it’s worth knowing this in the long run.

In addition to obedience & working intelligence, instinctive intelligence is another component of dog IQ. It refers to the instincts of the dog breed, or rather, what the dog was bred for.

For example, a Border Collie was bred to herd livestock. As a result, herding is the Border Collie’s instinctive intelligence.

Likewise, Shiba Inus were bred for hunting small and large game. In fact, they’re exceptionally good at flushing out birds from bushes.

They’ve been used as hunting dogs in the mountainous regions of Japan for thousands of years. Being able to quietly sneak up on birds and flush them out towards the hunters requires a certain level of intelligence.

Because Shiba Inus are so good at this, and have been doing this for so long, they’re a fine example of a breed with high instinctive intelligence.

The last component of dog IQ is adaptive intelligence, which refers to the dog’s ability to learn from previous events. In other words, it’s a measure of what dogs can learn to do for themselves (solving problems, avoiding mistakes, etc.).

For instance, Shiba Inus are fantastic communicators. They’re one of the most vocal dogs in the dogdom and have more than one way of expressing themselves to humans.

The “shiba scream” is a real thing. It’s a high-pitched, loud scream the Shiba produces when extremely distressed or excited.

Shiba Inus are also some of the most clever and cunning dogs. They know exactly what they want and how to get what they want. Many owners have fallen victim to the “manipulation” of the Shiba Inu.

One owner describes obedience training with his Shiba:

When we started training one of my shibas, he would stare at you until you had the appropriate amount of treats in your hand before doing a “command.” We literally kept adding one at a time until he found the amount acceptable.

All these are signs that point to a dog with high adaptive intelligence. If you asked any Shiba owner, they would tell you anecdotes just like these.

Shiba Inus are some of the best companions – if you can figure them out. In no way am I trying to scare you off from raising a Shiba Inu. I’ve personally lived with one and they can be as affectionate as they are entertaining.

But when deciding which dog breed to bring home, you shouldn’t be asking if Shiba Inus are smart enough for you. The truth is that all dogs are intelligent enough to provide most people with their needs.

Unless you need a dog for special tasks, such as police work, search and rescue or specialized hunting, any dog will fit the bill.

Instead, you should be asking yourself if the Shiba Inu’s personality and temperament fits yours.

So do you own a Shiba Inu? Leave a comment in the section below to tell us a moment when your Shiba outsmarted you!