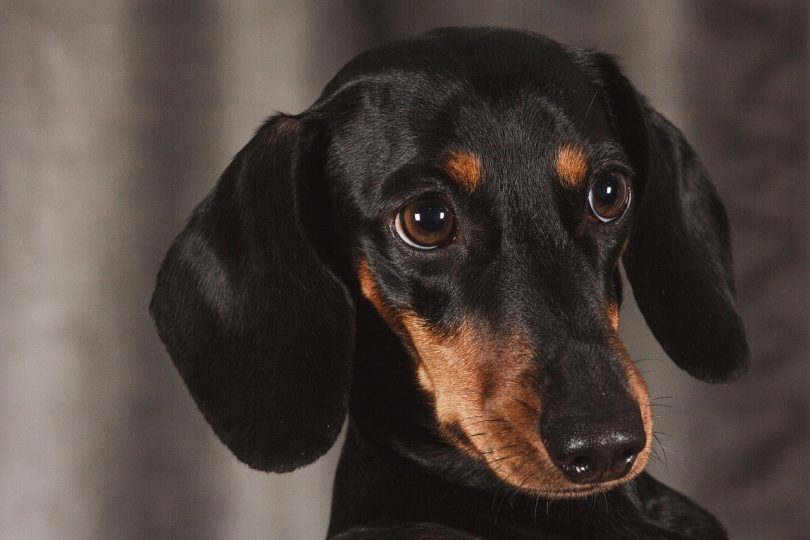 If you’re planning to bring home a Dachshund, you’ve made a great decision! These German dog breeds are friendly and affectionate, with a little bit of spunk. But potential owners may be wondering just how intelligent these little badger dogs really are.

So, are Dachshunds smart? According to canine psychologist and pHD, Stanley Coren, Dachshunds are classified as dogs with “average” working & obedience dog intelligence. In fact, they’re ranked the 92nd smartest dog breed out of 138 purebred dog breeds.

Though Dachshunds are considered “average” in dog IQ, there are many reasons why they’re actually smart dogs. Just because they didn’t perform superb in Coren’s intelligence trials doesn’t mean they’re not an intelligent dog breed. Let’s examine why.

How We Measure a Dachshund’s Intelligence

The dog intelligence list is largely credited to Stanley Coren, a researcher, pHD and prominent canine psychologist. However, he did have some help.

He asked the obedience judges to assess and rank various dog breeds based on his own criteria.

To fully understand why Dachshunds ranked so low in Coren’s dog intelligence rankings, we must first understand the criteria used by the renowned psychologist.

His trials were based on the following:

Coren made sure that only dog breeds with at least 100 responses qualified for his final dog intelligence ranking list. With that said, 138 different dogs qualified. Because of how popular Dachshunds are, they had no problem qualifying.

In addition, only breeds recognized by the AKC or CKC were allowed to participate in the trials. This means no mixed dog breeds, either.

How the Dachshund Performed

On the other hand, a Dachshund is able to successfully obey a known command on the first attempt with only a 50% or better success rate. Not too bad at all. However, this is still considered “average” among dogs.

For reference, many other popular dog breeds are in the same intelligence class as the Dachshund.

Dachshunds vs. The Smartest Dogs

Now that we have a good understanding of what an average dog is, how do Dachshunds compare to the “smartest” dogs in the world?

Breeds in the bright dogs group are able to learn a new command with just 5 to 15 repetitions. In addition, bright dogs are able to obey a known command on the first try with an 85% or better success rate.

For reference, other dogs in the bright dogs category include: both Corgi breeds, Cocker Spaniel, Brittany and the Pomeranian.

The top 10 smartest dogs are on another level. They’re able to learn a new command with less than 5 repetitions! Also, the top 10 dogs are able to obey a known command with a 95% or better success rate.

The dog breeds in the top 10 category include the Rottweiler, Golden Retriever, German Shepherd, Poodle and the Border Collie (at the number 1 spot).

Is Your Dachshund Smart?

To get a better ideal of how smart Dachshunds are, we asked real Dachshund owners what they thought about their dog’s intelligence.

To do this, we surveyed the popular Dachshund sub reddit and other dog forums for responses to this question. Here’s what the Dachshund owners had to say.

1. Jvfricke says Yes: “This might just be because I talk to [my Dachshund] a lot (I live alone, he’s basically my roommate) but he has a huge vocabulary and I’ve become very good at reading his reactions so that I know he hears most of what I say.”

2. Thathockeychick23 says No: “These dogs are very tough to train. Trust me, I have a mini dachshund. We have to have someone come in and train him cause obedience school did not do anything for him.”

3. Perplexed89 says Yes: “My Frodo-Dodo dachshund is the best bud I’ve ever had. So smart and loyal. Never leaves my side.”

4. Maloohree says Yes: “My doxie talks all the time. She does this little howl when she wants her toys out of the toy bin or when she wants them brought to her on the couch. She will howl when I walk in the door. Also when she wants food, water or to go outside.”

5. Ioakuas says Mixed: “I’ve had two doxies in my life… and of the two, one was very intelligent and the other was colossally stupid.”

6. Kjohnson says No: “I just don’t think these dogs are a very smart breed. Ours is dumber than a rock. He’s almost 4 and still has accidents in the house, even after we give him plenty of outside time. He’s a brat too!”

7. Calmiche says Yes: “Mine has quite a few words she recognizes. Including; Walk, Outside, Treat, Food, Water, Shower, Bed Time and several names of her favorite toys. She’ll actually go and find specific toys if I name them, which is interesting.”

9. Joannaduplessess says Yes: “Dachshunds are in no way dumb. They can be stubborn and strong willed, but it’s because they like to do things on their own time. They learn very well when you least expect it.”

10. Anonymous says No: “I bought 2 mini dachshunds last year.I never could get them potty trained.I would take the outside,and they would wait until we came back into the house to use the bathroom.They also like to tear up everything in my house.”

Most of these owners tell us a different story when it comes to their Dachshund’s intelligence. Though it’s a small sample size, 6 out of 10 owners believed their Dachshund was actually smart!

On the other hand, 3 Dachshund owners thought their dog was not very intelligent. Only one owner experienced mixed results. In his case, one Dachshund was smart and the other wasn’t.

Why Dachshunds Rank Low in Intelligence

One of the biggest complaints from Dachshund owners is that they’re stubborn little dogs. Though not all Dachshunds are stubborn, it’s more common than you think.

The problem with a stubborn Dachshund is that they’re not always willing to cooperate in obedience training. They won’t do it just for the sake of “working.”

And because Coren’s intelligence tests are heavily based on obedience, we can understand why Dachshunds would perform poorly.

However, just because your Dachshund doesn’t obey your command on the first try doesn’t mean they don’t understand you and what you’re saying.

I’ve fostered tons of dogs in my lifetime, but none as stubborn as the Dachshund.

Some Dachshunds will do what they want, and not because you (the owner) have given a command. It really depends on the individual dog.

When it comes to Dachshunds, the key is to shower them with a lot of affection and love. If you love your Dachshund unconditionally, they’ll begin to start opening up and cooperating.

This won’t happen overnight and will require some patience with your dog. Always train with positive reinforcement, as it works (by far) the best with Dachshunds.

There are certainly some limitations to the way Coren designed his trials. And although we think it’s a good place to start, it certainly doesn’t truly measure a dog’s intelligence.

Why Dachshunds Are Smart

Real owners will tell you that Dachshunds are fantastic at communicating with humans. They understand their owners very well and are unusually good at telling them what they want.

But when it comes to measuring true dog IQ, there are two other important components: instinctive and adaptive intelligence.

I would argue these dimensions are even more important than obedience and working intelligence, which were used for Coren’s trials.

The ability to naturally push and guide livestock towards different directions requires this special type of intelligence. Corgis were born with this ability (without human training) because breeders bred them that way.

Similarly, Dachshunds were bred to be badger hunters. In fact, they’re one of the fiercest and most aggressive hunters. It’s why they’re so good at their jobs.

Their instinctive intelligence is the ability to track down badgers with their noses and flush them out of their burrows. Plus, having elongated bodies and short legs help them efficiently maneuver through the burrows.

They’re so good at hunting badgers, the American Kennel Club tried to rebrand them as “badger dogs.” That being said, the world’s smallest hunting dogs have extremely high instinctive intelligence.

The final dimension of dog intelligence is adaptive intelligence. This type of smartness refers to the dog’s ability to learn for itself. Is the dog good at solving problems? Do they learn from past mistakes and experiences?

Though adaptive intelligence can vary within a dog breed, Dachshunds generally score well in this department.

For example, Dachshunds are capable of understanding a huge vocabulary, which is why they’re so adept in the communication department.

A Reddit user tells us exactly what we mean. He posted:

I could tell he wanted something… So I ran through in escalating order of things he likes to see if that’s what he wanted. When I went to “water” he lost his mind and ran to his bowl and sure enough, he just ran out of water.

This Dachshund made sure that the owners knew exactly what he wanted. What a smart dog indeed!

Another Doxie owner (and The Smart Canine reader) explains to us:

Bella, our doxie is not great with obedience. But things she does like bringing us the remote when she wants to watch TV makes us think she’s super smart. And yes, she loves staring at the TV.

These are just two examples of high adaptive intelligence with Dachshunds. However, there are plenty more. Doxies do these type of things all the time – just ask any owner!

And if your Dachshund has demonstrated something that makes you think he or she is highly intelligent, please leave a comment in the section below!

Are Dachshunds For Me?

It’s important that when you choose a dog breed, you don’t decide based on an “expert” calling one dog breed intelligent.

Dogs really don’t need to be that smart. Most dog breeds, including the Dachshund, are more than capable of giving you what you need.

Instead of asking how smart Dachshunds are, you should be asking, does a Dachshund’s personality and temperament fit mine? It’s more important that Dachshunds are compatible with you and your family.

With that said, Dachshunds are one of the most loving breeds you can find. They can be a little mischievous at times, but it’s all part of their charm. They’re the ultimate German lap dog.

If you still feel like Dachshunds are right for you, then you should absolutely get one!

Do you own a Dachshund? Let us know, is your Dachshund smart? Leave a comment in the section below!