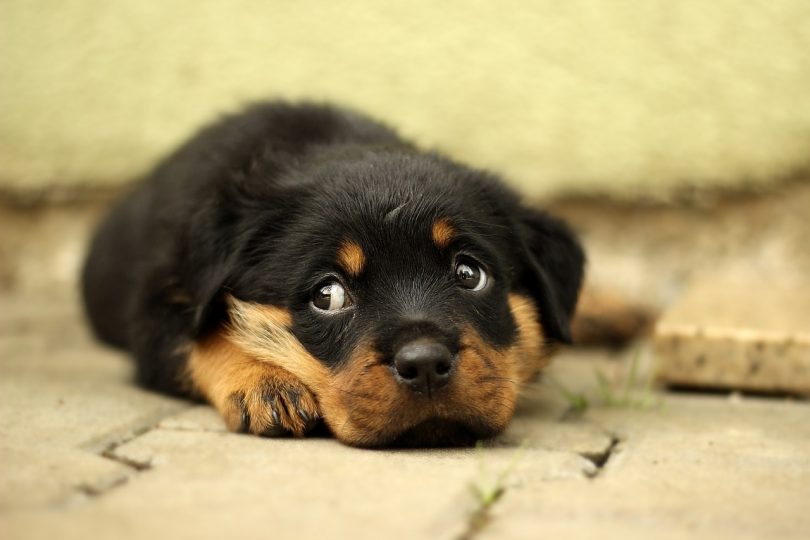 If you’re planning to bring home a Rottweiler, then there’s a lot of things you’ll need to consider. Puppy vaccinations, diet, training, temperament, among other things are important. However, what about the Rottweiler’s intelligence and ability to learn?

Rottweilers are undeniably intelligent dogs. But what exactly makes these dogs so smart compared to the rest? To understand the true intelligence of Rottweilers, we first must examine the criteria in which Coren used for his trial tests.

How We Measure a Rottweiler’s Intelligence

Rottweilers are the 9th smartest dogs out of 138 qualifying breeds. But how did we come up with this ranking? Psychology professor Stanley Coren is largely credited for this. Though the renowned pHD and canine psychologist received both criticism and praise for his methods.

There was certainly a lot of controversy and debate surrounding his methods. The way he conducted his trials on dog intelligence was not perfect in identifying true canine IQ. Even so, it’s a great starting point. Plus, it’s really all we have at this moment.

Stanley Coren did not do it all himself. Rather, he had the help of 199 obedience trial judges for the research and trials. Using his criteria, the North American trial judges evaluated and ranked individual dog breeds, thus collecting data for Coren.

Coren’s Intelligence Tests Were Based On 2 Factors:

It’s worth noting that only dog breeds recognized by either the AKC or the CKC participated in these obedience trials. In addition, only breeds with at least 100 responses were qualified for his final list of smartest dogs. Unfortunately, this eliminated many breeds from the list.

Given the international recognition of the Rottweiler and the immense popularity of these dogs, they had no problems qualifying. Plenty of Rottweilers partook in Coren’s trials. Plus, many of them performed at an exceptional level.

How the Rottweiler Performed

Based on Coren’s test criteria, the Rottweiler performed extremely well. With such a performance, the Rottweilers scored among some of the “smartest” dog breeds in the dogdom. So well, that they’re in the best class for canine intelligence – the top 10!

So what exactly does this mean for the Rottweiler’s intelligence? On average, the Rottweiler is able to learn a new command with just 5 repetitions or less! This means that depending on the difficulty of the command, Rotties may learn it in just a few minutes.

Equally impressive, Rottweilers are able to obey a known command on the first attempt with a 95% success rate (or higher). If you think about it, this is quite amazing! They’re some of the world’s most obedient animals. Who knew Rottweilers were this obedient?

It’s no coincidence that this popular dog breed is one of the most intelligent. Other breeds such as the German Shepherd, Border Collie, Golden Retriever, Labrador Retriever and the Doberman Pinscher are also in this class. They’re also some of the most popular.

Given how all those dogs play such a vital role in police work, herding, search & rescue and other various canine jobs – being grouped with this class is nothing to scoff at.

There’s nothing wrong with being average intelligent. However, there is a significant gap between an average dog and the Rottweiler. Not only do Rottweilers learn much faster, but are also able to recall and obey known commands with a higher rate.

For example, a dog with “average” intelligence is able to learn a new command with just 25 to 40 repetitions. In other words, the average dog needs at least 5 to 8 times more repetitions to learn a command when compared to the Rottie.

Additionally, average dogs will obey a known command on the first try with just a 50% success rate. Most “average” dogs are just more stubborn and strong-willed than higher performers. As such, they are not nearly as impressive as the Rottweiler, but not bad either.

Is Your Rottweiler Smart?

Now that we know Rottweilers are exceptionally quick learners and obedient dogs, what do Rottweiler owners think? Like humans, intelligence may differ on an individual level. So, we think this may be the best method of gauging a breed’s true intelligence.

For this section, we decided to survey real Rottweiler owners from the popular Rottie sub Reddit and other popular dog forums. Here’s what they had to say to the question:

1. Wrath4771 says Yes: “Rotties are great with other breeds…They’re an intelligent breed that likes to keep busy. Having another dog around will definitely keep them entertained.”

2. Laichas says Yes: “They’re very smart, my Rottie can open the latch on his crate (simply because he saw us do it). Make sure that you not only physically exercise them but also that you stimulate their minds with puzzles, toys, and regular training. If they get bored they will break stuff!“

3. Monoxide211 says Yes: “I’ve had them my whole life and have enjoyed everyone of them. Smart, protective, highly trainable and loyal! They just want to be part of the team.”

4. Jnnytoronto says Yes: “We’ve had [our Rottweiler] for only 5 days and he sure is smart, a little stubborn, mischievous, but an awesome dog!“

5. Theglorybox says Yes: “They’re very smart, and very loyal. Mine picked up on things quickly even as a puppy. Just be careful, because they will also try to outsmart you! As long as they know who is the boss (you) they’re amazing dogs.”

6. A_cat_farmer says Yes: “They are so smart! My Rottweiler is 12 weeks old and can already sit, stay, come, lay down, go to bed, shake, up/down, as well as dramatically play dead!”

7. Denniepie says Yes: “Training a rottie is a two-edged sword at first. They are so smart, they sometimes have the idea that they really don’t need your input. But once they get the plot, working with them is a dream.“

8. Rugger81 says Yes: “They are great dogs and very smart, eager to please their owners, and are very well balanced dogs if trained properly.”

9. Dreamsofglasswolves says Yes: “Rottweilers are indeed very intelligent and there’s no reason you couldn’t train him to the same standard…”

10. 9grendel9 says Yes “You couldn’t choose a better dog to spend your life with. Smart, playful and loves there peeps more than any pup I have ever been around.“

11. Jacktomothy says Yes: “I have had 3. Mine were all smart, loyal, fearless, and doofus’s. I love how they always keep an eye on you. They make you feel secure. They really are more human than dog.“

Other Reasons Why Rottweilers Are Intelligent

According to Stanley Coren’s intelligence trials, Rottweilers are fantastic leaners and very obedient dogs. However, I would argue there’s more to Rottweilers than just tricks and bids. Even Coren will be first to admit this.

Though measuring how fast a dog can learn may correlate with high intelligence, it doesn’t tell the full story. And due to the temperaments of some breeds, results aren’t always accurate. With that said, obedience and work intelligence is just one component of a dog’s true IQ.

As a matter of fact, there are three dimensions to dog intelligence. The other two are instinctive and adaptive intelligence. Both of which, are probably more important. Read on to learn how the Rottie compares in these two other IQ dimensions.

Instinctive intelligence refers to the ability or special skill that the dog breed was bred for. Nearly all dog breeds were bred for a purpose back in the day. Whether it be herding, companionship, duck retrieving or protection – they all had a role in society.

For instance, Australian Shepherds were bred to be herding dogs. They’re some of the best at it. The fact that Aussies are able to instinctively push and drive livestock requires instinctive IQ. They were not taught this ability and need little human intervention.

Rottweilers are naturally born to guard. Some are more suspicious, some are easy going. But most will only bark when there is something to really bark about.

Because they were originally developed to be drovers, or protectors of livestock (cattle), they have an inner instinct to protect and defend. This is the Rottweiler’s instinctive intelligence – and, they are some of the best at it.

Make no mistake, there are many great guard dogs in the world. Most of them are big and vicious dogs. But what make Rottweilers arguably the best is a great understanding of the environment. After all, they need to assess the situation.

In other words, they’re smart enough to accurately interpret who is a threat and who isn’t. For this reason, Rottweilers make great guardians for children or seniors. Or at the least, another set of eyes to keep them away from trouble.

Just check out this Rottweiler in action:

For example, one Rottweiler owner tells us:

The first time I was throwing a stick, my other dog kept stealing it. My rottie looked at me and I said ‘get me a stick.’ I had never used the word before but he figured it out and got a stick. He got one so huge the other dog couldn’t carry it so he wouldn’t steal it.

This owner’s Rottweiler was able to “figure it out” by observing the other dog grabbing the stick. And although he was never taught the word “stick,” he somehow made the connection. If this isn’t a sign of high adaptive intelligence, I don’t know what is.

My rottie is super sharp at figuring out what we’re doing. When we grab our doggie bags, he patiently waits next to the leash because he knows we’re going for a walk.

Through years of experience, Emerson’s Rottweiler was able to figure out the “hints” that led to the different situations that commonly happen. Again, learning from past experiences is a clear indicator of high adaptive intelligence in Rotties.

We understand that these are just two examples. But if you asked any Rottweiler owner, they would likely have plenty of stories just like these. Just take a look at the internet and you’ll hear many more like these too!

Does Owning a Smart Rottie Matter?

Does it really matter if you have a smart dog? The truth is, there really is no need to have a smart dog breed. Nearly all dogs are capable of providing you with what you need. Don’t let the “experts” tell you how intelligent your dog is.

Unless you’re looking for a breed with a specific skill set for a complicated task or job, you’ll be okay with just about any dog breed. Perhaps the only benefit of owning a breed like the Rottie is the ability to learn quickly. If you’re big on obedience, Rotties aren’t a bad choice.

Is the Rottweiler Right for You?

Despite their tough appearances, Rottweilers are actually very affectionate dogs. Additionally, they can be sensitive and highly intelligent. It’s why they develop such close attachments with owners. So much so, that Rottweilers tend to develop separation anxiety.

A huge part in forming a wonderful bond is having good communication. Rottweilers are smart and will be able to understand what their owners want. In a short amount of time, they can figure out a way to communicate their needs and wants.

Not all dog breeds are capable of this, but the Rottweiler certainly is.

So instead of asking whether Rottweilers are smart, it’s better to ask if the Rottweiler’s personality or temperament is right for you. At the end of the day, you’ll want a dog that can fit your needs. If this is what you’re looking for, then I would definitely recommend the Rottweiler.

There are few large dog breeds as great as the Rottweiler.

Do you own a Rottweiler? Is your Rottweiler smart? Let us know what you think in the comments section below!