What Were Rottweilers Bred For? – The Jobs, Roles & History of Rottweilers

Most Rottweiler owners will agree that this apparently intimidating breed of canine can be the sweetest and most loving pal at home. But with their protective instincts, size, strength and courage, you may be wondering the true nature and purpose of Rotties.

So, what were Rottweilers bred for? Rottweilers are the result of a crossbreed between the Roman Mastiff-type dogs and German sheepdogs. They were developed to be herding dogs but were also bred to pull carts of meat from butchers to the market and to protect their masters from robbers and attackers.

As working dogs turned pets, Rottweilers require plenty of training to bring out all their best qualities. Rottweilers are not only sweet and loving, but are also loyal, intelligent, gentle and caring. Read on to understand how an originally fierce working dog is now a loving pet.

What Rottweilers Were Bred to Do

As stated above, the Rottweiler is a crossbreed between Roman dover dogs (herding) and the German Sheepdogs. This mixture was a successful attempt at a new breed that would have the energy of a herding dog and the temperament of a guard dog.

Those two qualities defined the job description for which the Rottweilers were bred to do in the past. They worked various working jobs, making them one of the most versatile breeds in the world. Read on to learn more about the Rottie’s jobs.

The Rottweiler’s ancestors (a type of Asian Mastiff) were bred by the Romans to help drive their livestock herds as the Roman armies fought the Germanic tribes back in 200 CE. As you can tell, there’s a long working-history with these dogs.

As Roman armies crusaded across Europe, they would bring cattle along with them for their meat provision. These Mastiffs were used as drover (herding) dogs, but would often be left abandoned when the herds reduced.

After the collapse of the Roman empire, the presence of the drover dogs in the southwest German town Rottweil brought the idea of crossbreeding them with the prevalent German Sheepdogs. But why did they need to do such a thing?

We had two Rottweiler’s that herded extremely well. Their herding ability was natural, as I never intended to train them to move stock. They just took to it like a duck to water.

This move would bring forth a hybrid dog that had the herding skills of the Roman Mastiffs and the guarding skills of the German dogs. They were no longer a one-dimensional dog breed, as the balance in temperament made them such versatile dogs.

The new Rottweiler breed became the herding dog in Rottweil. They would drive pasture to the market, a task that earned them the name Rottweiler Metzgerhund, which essentially meant “Rottweiler butcher’s dog.”

Today, Rottweilers are not the ideal herding dogs that first come to mind. But because they were originally bred for herding, some may still retain those instincts deep down. It’s why there are some Rotties that still herd sheep:

In addition to their herding duties, Rottweilers would also pull carts loaded with butchered meat to the Rottweil markets. Their size and strength made them ideal cart-pulling animals, and the people of Rottweil took full advantage of that.

The Rottweiler was well-suited to these jobs for a few reasons. For one, they have a strong urge to control and gather livestock. Their build is also quite strong and durable, making it easy for them to intimidate cattle and pull heavy carts.

Even today, your Rottie may have the instincts to pull – similar to that of a Siberian Husky pulling on a sled. After all, carting is a large part of the breed’s history. If you want to try this out, there are carting competitions for Rottweilers.

The participants claim that Rottweilers will pull everything. From DIY wooden or PVC carts to professionally-made carriages, Rotties instinctively start pulling. It’s worth noting that your dog should be an adult with a good grasp on training first.

Rottweilers maintained their cart-pulling jobs until railroad cattle cars or donkeys replaced them in the 1800s. Once they were no longer needed for these duties, they transitioned to other tasks, including offering full-time protection.

Have you ever wondered why Rottweilers are such excellent guard dogs? Rottweilers are consistently on top of every list of best guard dog breeds, and for good reason. It’s not just because of their loyalty, but also their protective instincts.

While the Rottweiler’s ancestors (the Roman Mastiffs) drove cattle through long distances, they were also tasked with protecting their masters. Eventually, the protection job was also taken up full-time when their herding and cart-pulling tasks diminished.

Training a rottie to be aggressive is never a good idea! They are naturally protective dogs. even the softest couch potato will be cross if someone unwanted enters his or her property.

In the Rottweil markets, butchers had a lot of trust in these dogs. So much so, that Rotties were tasked with protecting the money. Pouches of money collected at the market hung around their necks. As a result, few thieves dared to steal from them.

Just think of these dogs as a combination of private security and the cashier register. When the market closed, Rottweilers accompanied their butchers on the way to the bank to make sure no one attempted to rob them. Truly, a useful guard dog.

It’s important to note that despite protection being one of the primary roles of the Rottweiler, not all of them are innately good guard dogs. The Rottie’s instincts are to pause and try to assess the situation first. So, this job may require socialization and training prior.

When you think of dogs in law enforcement, the German Shepherd may first come to mind. Or maybe, the Doberman Pinscher. However, Rottweilers were among the first police dogs that had the honor of answering to a higher calling.

Rottweilers were adopted as police dogs and personal guard dogs, both of which are jobs that they perform to this day. In fact, Rottweilers were among the first guide dogs for the blind! Plus, they’re excellent search-and-rescue dogs.

While they were once used as police dogs, they’ve grown out of favor in recent years. The National Police Dog Foundation says that Rottweilers are still used in the police force, but are much less popular than before.

Major policing departments around the world (such as those in the United Kingdom) don’t list these Rottweilers among preferred breeds used by police forces. The AKC has a similar stance, as they don’t list them among their popular police dog breeds.

Some people suggest that the fierce and reactive nature of the dog breed is not suitable for the role. This is because police dogs are carefully trained to track, chase, and hold down suspects – nothing more.

According to Stephen Gregory, his department had two Rottweilers in the 80s. One of their K9 officer tests was to choke down an uncontrollable dog. Not only did Rotties weigh more, but “they also have stronger neck muscles, which made it harder” to do so.

Plus, Rottweilers have a strong jaw and are quick to bite and injure. And though Rotties are highly trainable, instincts can take over. In addition, the breed is also disqualified as a K-9 breed due to its short lifespan (between 8 and 10 years).

The American Kennel Club registered the Rottweiler breed in 1931, thus forever cementing them as a noteworthy breed in American society. In today’s modern world, Rotties fulfill the role of loving pets. However, a minority still perform labor in some parts of the country.

They do such a good job with their companionship role that they’re consistently top 10 on AKC’s list of most popular dogs. That might sound surprising considering that the breed has suffered a bad reputation as a fierce attack dog.

Many families around the world still use Rottweilers as large guard dogs. And while it’s not a bad idea, socialization and obedience training is extremely important, especially with kids in the home. They’re dominant dogs that require a firm leader.

All of these features define the Rottweiler. As a result, they, like all guard dogs, need proper training and socialization. This is the difference maker that turns them into lovable pets and “wise” guard dogs who know when to attack or refrain.

In the home, Rottweilers can be affectionate, sweet and loyal. All of which, are top qualities you’d want in a family companion. But make no mistake, they’re confident and courageous dogs that are scared by very few things.

He was the softest, sweetest dog with people he knew. I used to love having him in the barn with me late at night because he made sure he was with me when people came in.

Because they are an intelligent breed, they pick up new things fast and learn to be loving, loyal, and well-mannered in no time. Rotties score among the highest for obedience and working intelligence. So, training should be a breeze.

Rottweilers also play well with older children. Younger children may not always know how to behave with dogs and might trigger the fierce side of a Rottweiler. Even so, a Rottweiler will protect children just as they will adults.

Surprisingly, some governments (such as the Irish) have breed-specific legislation against the ownership of Rottweilers. In addition, many insurance companies don’t cover the breed due to their perceived “volatility.”

And as popular as Rottweilers are in America, these same regulations can be found within this country. For example, the town of Royal City in Washington State does not allow their citizens to own Rottweilers, as the local government has deemed them a “dangerous dog.”

While some specific incidents may have led some municipalities to ban the Rottweiler, they can still be loving and kind dogs. In my opinion, most of the incidents were due to a lack of (or poor) training by the humans. It’s rarely the dog’s fault.

To prove my point, Rotties have been highly successful in areas where care and affection are required. For example, a Rottie received the Award for Canine Excellence in Therapy (2015). When effort is put into raising these dogs, they can achieve the same.

Are Rottweilers For Me?

Rottweilers are not for everyone. That’s not to say Rottweilers aren’t for you. If you’re able and willing to spend the time to raise these dogs, they’ll become amazing companion dogs for years to come. I mean, they’re wildly popular for a reason.

If you’re a first time dog owner, we do not recommend the Rottweiler. Because of the jobs Rottweilers were originally bred to do, they still retain many of those instincts. Unless you’re bringing home a dog for these jobs, it’ll be difficult to keep those instincts in check.

We cannot stress how important socializing and training your Rottweiler is. In addition, the breed requires plenty of mental and physical stimulation. They’re intelligent, but also active dogs. So daily physical activity is a must!

We hope this guide helps you understand the transition from their past to their present. The reason why your Rottweiler may act the way they do is likely due to several generations of breeding these instincts deep into them.

But if after all this and you think you’re capable of raising a Rottweiler, then we suggest you go ahead! They’re some of the best large dog breeds, especially if you’re looking for a kind companion that doubles as a guardian. 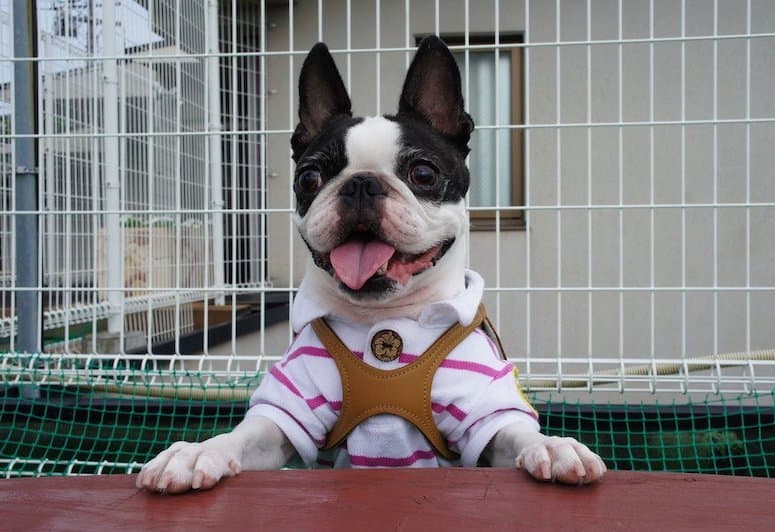 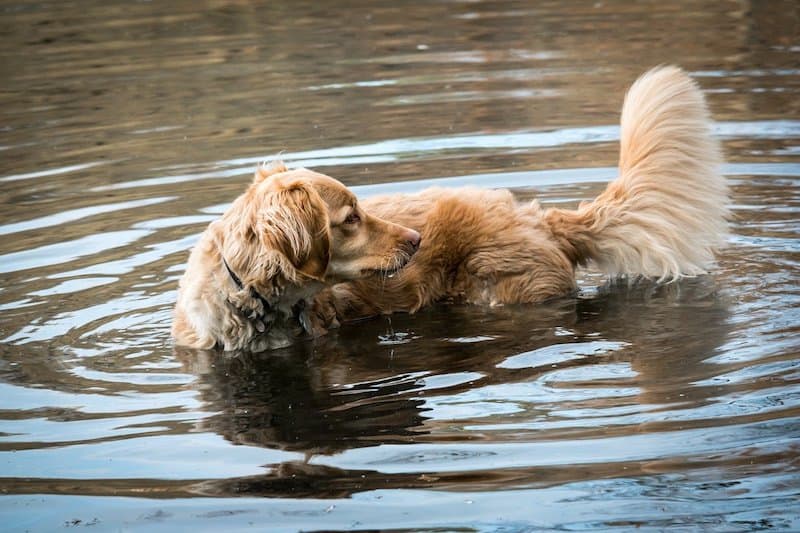 Next →
Can Golden Retrievers Swim? - Reasons Why Goldens Are Good Swimmers
Click here to cancel reply.