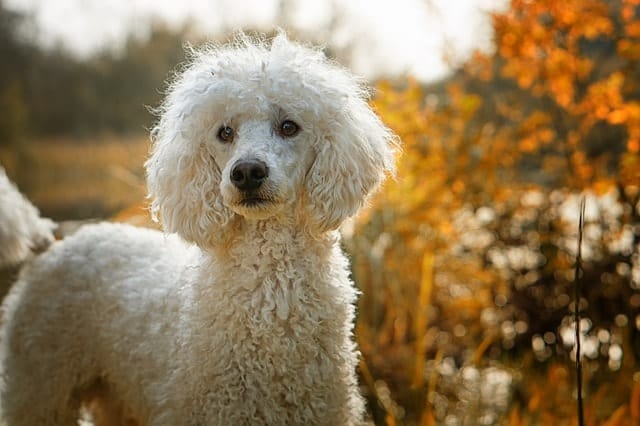 The Poodle is a very popular dog in the US. In fact, they always end up in the top ten each year in terms of its popularity. They’re known for high intelligence, but their curly and poofy coats may make you wonder what they were actually meant to do.

So, what Poodles were bred for? The Poodle was originally bred to be a retriever in the water. Specifically, they would accompany hunters and retrieve shot-down ducks and other waterfowl from ponds and lakes. Later, they became circus dogs, war dogs and even truffle hunters. Though, they’re mostly bred for only companionship today.

There’s more to the Poodle than you know. Let’s take a deeper look into the old history, jobs and roles of the elegant Poodle. We’ll also dive into their origins and why they’re so good at their “hunting” jobs.

The Poodle is a very intelligent dog that’s both extremely trainable and very loyal, which is why many dog owners choose the Poodle as their family pet. But despite their elegant and graceful looks, the Poodle can be an active dog breed.

However, all three variations are by far the most popular hypoallergenic dog breeds in the world – for good reason! In other words, they’re the perfect companion dogs for those that are sensitive to dog allergens.

Origins of the Poodle’s Name

Ever wondered why they’re called “Poodles?” These dogs get their name from the German “Pudelhund,” which, when translated into English, means puddle dog.

In German, Pudel means “to splash about“ and Hund meaning “dog.” Pudel also means “puddle” when interpreted into English. As you can see, the name says it all.

In French, the word for Poodle is “Caniche” – short for the longer name, “Chien de Canard,” which means “duck dog.” From the French name, we see that the Poodle’s role as a duck retriever was widely-known.

Even in their name, there are signs of what Poodles were bred for. These dogs are, without question, associated with water and were developed to be in water. As such, it’s probably why Poodles are such good swimmers.

Why Do We Breed Dogs?

Though many people simply want a dog as a companion today, it wasn’t always the case. In the past, dog breeding had the primary goal of creating dogs that were excellent at certain skills or that had a certain temperament.

We call them purpose-bred dogs. Depending on the reason for wanting a dog, breeders will look for specific physical or characteristic attributes and behaviors. Each dog breed that we know today will have likely been bred with a particular role or job in mind.

For instance, many dogs were bred as hunting dogs, retrievers, guard dogs, herders or as loyal companions. No matter their designation, there will have been selective breeding to ensure that the breed developed characteristics that were ideal for their role.

By way of example, a guard dog will not be bred with the same behavioral traits as a dog that is bred to be a family pet and lap dog. Likewise, herding dogs have some of the best work ethics, especially compared to dogs meant to sit on owner’s laps.

What Poodles Were Bred For

There is a strong belief that Poodles actually descended from the curly-haired hunting dogs of Asia. And while Poodles were technically hunting dogs, they didn’t actually hunt and kill the game. Instead, they were retrieving dogs.

Their primary role when originally bred was to be a water retriever or a “gun dog.” In fact, some Poodles are still used in this role today. From temperaments to physical qualities, the Poodle has all the components that make up a highly capable water-retriever.

Hunters would shoot down waterfowl (aquatic birds), such as ducks, and geese, then let the Poodles bring them back over the river, lake or other body of water. This way, hunting was more efficient, as hunters didn’t need to take a boat out every time.

Check out this amazing Poodle retrieve a duck in training:

To be great water-retrievers, they needed the right temperament and qualities. For instance, Poodles were bred to be agile in the water and their curly coat is water-resistant. These dogs also needed to be eager learners, which they were.

According to hunting enthusiast, Libbe Erickson, “they [poodles] can do anything a lab can do.” As respected as the Labrador Retriever is in the hunting world, it says a lot that these dogs can match their skills and abilities.

Poodles in the circus

The Poodle has, of course, had many differing roles aside from duck retrieving. But perhaps the most interesting of them all is as a circus performer. That’s right, these dogs were and still are great performers!

By the end of the 19th century, waterfowl hunting had declined. As a result, there were a lot less Poodles being bred for this job. Instead, they were frequently used in circuses that traveled all around Europe. And, they were a huge hit!

Every trick she learned, my mom showed her just once. Say the command, and she had it. She was extremely smart.

It’s no coincidence that Poodles had so much success in the circus. They’re some of the best learners when it comes to tricks and commands. In fact, Poodles are the second most intelligent breed for obedience and work intelligence.

When comparing how quickly a dog breed learns a command and the success rate that the dog will obey a known command, only the Border Collie scored higher. You can check out the full list of 100 smartest dogs here.

Poodles were truly all-purpose working dogs. They’re much more than just cool tricks and retrieving. As a matter of fact, these dogs were regularly used as wagon pullers, guard dogs and guide dogs. But did you know Poodles were once war dogs too?

In 1942, in the midst of World War II, the US Army looked into 32 different dog breeds to be used as war dogs. And of course, the Standard Poodle was one of them. While the army loved their ability to learn, a huge drawback was the fast-growing coats.

Still, this didn’t stop the US Army from further exploring the Poodle for military use. Just a few years later in 1944, the military had narrowed the list to just 5 breeds. Unfortunately, the Poodle didn’t make the cut.

Although Poodles had many jobs in the past, their main role was in retrieving. As such, the Poodle was developed to be the best retriever possible. With all the clues we see in these dogs today, there’s evidence suggesting they’re top retrievers.

For example, Poodles are also excellent swimmers. This is a characteristic that has been built into the breed for their water retrieving purpose. This is not to say, however, that every single Poodle is a natural swimmer. But, they do have the instincts for it.

Still, the best evidence we have is in the physical characteristics of the Poodle. Let’s take a look at some examples to see why they were intended for their duck retriever role:

The coat of the Poodle is lustrous and very dense. In addition, it comes with tight curls that make it very water-resistant. Having such a coat is clearly an advantage for the Poodle as a water retriever!

The extravagant puffy coat that we see on Poodles actually had a useful purpose back in their working dog days. They weren’t just for show. In fact, the cut was used to give them extra mobility in the water, while protecting vital areas.

Hunters who owned Poodles for duck retrieving wanted their dogs to be agile in water and to be able to swim freely without restrictions. At the same time, the Poodle’s body needed to be protected from the harsh elements and temperatures of the water.

Thus, the fur from the tail, legs, and neck was removed. The leg joints, hips, and chest still kept their coat. This classic “continental clip” was a necessity for the job of the Poodle.

This style had extra hair on the joints and vital organs to protect them from the cold while in the water. Even the “topknot” or fluff on the head had a specific purpose, that is, to allow the hunter to spot the Poodle in the water.

The Poodle’s head is held high and proud, which is great for swimming in water. The strong and elongated neck of the Poodle is responsible for keeping the dog’s head far out of the water while swimming to see more clearly.

Another advantage of a long neck is that it keeps the water from getting to the dog’s eyes. Without swimming goggles, this may be the next best thing for these dogs.

The Poodle’s body is sturdy, well-balanced and well-proportioned. And believe it or not, the Poodle is a sneaky athletic and agile breed. Don’t let their elegant stance fool you. There’s a reason why they do so well in agility trials.

Their muscular shape means they’re great at swimming, but they’re also very graceful in the water too. The Poodle’s body clearly reflects its role as a working and athletic dog.

And because of their bodies, the Poodle is graceful both in the water and out. Movement appears light yet effortless, with a definite spring in its step. Just take a look at a Poodle in the water and their body will look completely natural.

The roles and jobs of Poodles have evolved since their colored past. Because the Poodle had a lot of great characteristics, it became a dog that was highly sought after for many other reasons aside from hunting.

Its excellent nose meant many Poodles were trained as truffle hunters. They were also bred as entertainers due to the easiness and eagerness of being trained (they’re obedient dogs) and their beautiful looks.

In America during the early 20th century, the Standard Poodle was bred down to create the Miniature and the Toy Poodles. The reason to breed “smallness” into the dog was so that they were able to enjoy city, living in spaces that weren’t as big.

Today, the miniature and toy variations make some of the best apartment dogs. No matter the size of the Poodle, they’re a great all-rounder and it’s clear to see why so many people choose this dog breed as their loyal companion.

Poodles are just like any other dog breeds today. They’re one of the best family dogs and companions because of their charming, elegant personalities and favorable temperaments.

According to Cesar Millan, Poodles are one of the top 10 best dog breeds for families. He did mention that Miniature and Toy Poodles may be a little too high-strung for families with children. Standard Poodles, on the other hand, are perfect playmates for kids.

It also doesn’t hurt that they’re some of the smartest dogs ever. As a matter of fact, they’re only second to the Border Collie in terms of obedience and working intelligence.

But never raise a Poodle because they’re “smart.” Instead, pick a dog breed that matches your personality and your needs. All dogs are intelligent enough for most families.

As they were originally bred to be hunting and retrieving dogs, Poodles still retain the active lifestyles that they once had. If you want to raise a Poodle, make sure you give them plenty of physical activity for stimulation.

We highly recommend Poodles, of all sizes, for an active person or those part of an active family. These dogs will be perfect for you. Give these amazing water retrievers a try and I’m sure you won’t regret it.