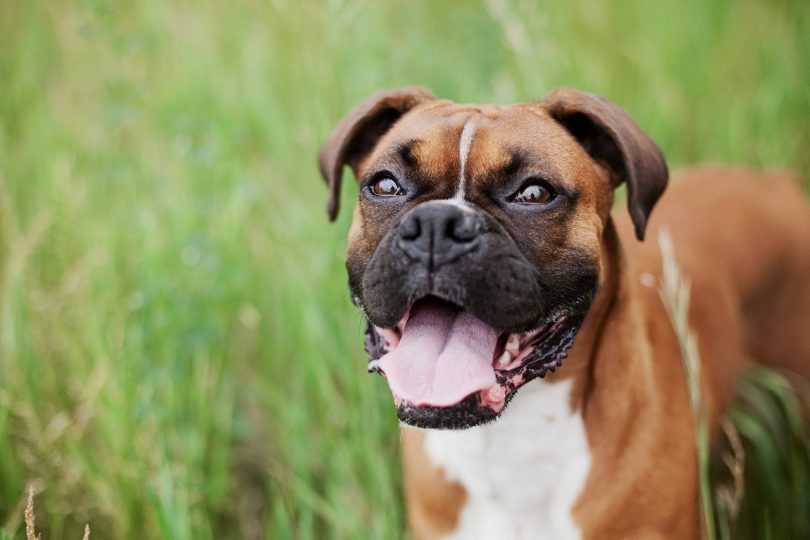 There are few dog breeds that have the balanced personality and temperament of a Boxer. Not only are they fun-loving, but they’re also energetic and courageous. They’re great single-owner dogs, yet attractive family dogs too.

If you’ve decided to keep a Boxer, then you’ve made a great decision. However, you have options in regards to colors. As a matter of fact, Boxers come in three distinctive and stunning colors.

Two Boxer colors are officially recognized by the AKC as standard colors. In addition, Boxers come with 5 different types of coat markings. Though only three of the markings are recognized.

Colors of the Boxer

It doesn’t really matter which color combination you get. What matters is you fully understand these dogs’ personalities and they’re a great fit for you or your family.

With that said, the three possible colors of the Boxer include:

Furthermore, these dogs can come with distinct markings on their coats. These five markings are categorized by the American Kennel Club as the following:

The first three markings are considered the “standard” color markings for the Boxer. On the contrary, white, brindle and fawn markings are not.

Many Boxers you encounter will come with the base colors of fawn or brindle. They’ll also have several variations of markings on their coat. Let’s further dive into what each colors are.

A fawn colored Boxer is perhaps the most popular of the three available Boxer colors. They’re the iconic look of the Boxer and what first comes to mind with these dogs.

The color fawn is not exclusive to Boxers. Purebreds such as the Beagle or Chihuahua also come in fawn, among many other breeds. Even mixed dog breeds like the Chiweenie or Gerberian Shepsky have this color as well.

In a nutshell, fawn is a lighter brown color – almost like a milk chocolate color. However, even this hue of brown can vary depending on the dog.

Most fawn Boxers will have a sleek brown coat with a black mask and white markings. The “black mask” refers to the muzzle of the Boxer, whereas the white markings can be seen on their necks, chest, paws and even the face.

This Boxer color is attractive and well known among the dog community. There’s nothing wrong with having a color that almost every Boxer has, as it fits these dogs so well.

The brindle colored Boxer is the second most popular color choice for this dog breed. Again, this color is not exclusive to this breed, as it’s seen in French Bulldogs, Pit Bulls and many others as well.

What’s unique about the brindle color is that it’s not really a color, but rather a coat pattern. Still, we categorize it as a general color for simplicity.

Brindle Boxers will have a base coat that’s fawn colored. However, it’s unique because of the black colored striping. It almost looks like a tiger, which is why it’s sometimes called the “tiger stripe.”

There’s a lot of variation with brindle Boxers. The stripes can vary in degree of black, either lighter or darker. Also, the stripes can be either thin or thick. You’ll have sense of stripe density and coloring by examining the parents of your Boxer.

There are cases where the stripes are so dark and thick that the Boxer looks like a solid black dog. On the other hand, brindle Boxers with extremely light stripes can look like a fawn Boxer.

Like with the fawn Boxer, brindle Boxers typically have a black mask with white markings. The black mask refers to the muzzle of the dog. In addition, white markings include areas of the chest, paws, ankles and face.

Other instances of markings include brindle Boxers with only the black mask and no white markings. Though not as popular, they are fairly common with brindles.

Both of these marking combinations, along with the brindle color, are considered standard and officially recognized. They fit the Boxers very well and will most likely be what you’ll get with these brindle colored dogs.

Among the three possible colors for a purebred Boxer, the white color is the only one that’s not considered a standard color. At one point in time, white Boxers are widely popular and officially recognized as a standard color by the AKC.

Though it’s still recognized, it’s not a “standard” anymore.

While it’s true that white Boxers aren’t the standard, they’re still fairly popular. In fact, 25% of all Boxers in the United States are white. And surely, these colors will continue to be bred as people consider them unique and appealing.

Keep in mind, these dogs are not rare and breeders demanding a premium for a white Boxer should be avoided. The white color gene is recessive, so as long as both the mother and father Boxer has this gene, you will get a white Boxer.

The markings on a white Boxer are much more unpredictable than with a fawn or brindle Boxer. There’s a lot more variation in color markings that are being bred.

Some white Boxers will be solid white with no markings. Others will have only brindle markings. However, the most common marking is fawn – often a darker shade than usual.

As for the placement of these markings, it can also vary as well. Most of the time, white Boxers will have an “eye patch,” where color appears around a single eye.

I’ve even seen white Boxers with a single colored ear. It really depends on the dog and parentage in this case.

The Problem with White Boxers

Despite popular belief, there are not a ton of health problems that arise with breeding white Boxers. However, this doesn’t mean that there isn’t anything wrong with them.

The biggest health condition seen in white Boxers is deafness. In fact, nearly 18% of all white Boxers are born with deafness. This is a rather large percentage for such an important sense associated with canines.

The deafness is caused by the lack of pigmented skin in the inner ears of the dog. This leads to atrophy of their nerve endings in the crucial period just weeks after birth.

But even if you have a deaf white Boxer, they are still great dogs that are highly trainable. Dogs, such as Boxers, don’t only rely on sound for commands.

Rather, they’re highly skilled in reading body language and can rely solely on visual cue. If you train your dog with hand signals, they’ll be just fine.

Additionally, a white Boxer will be no different than any other Boxer – even if they are deaf. Some people believe that lacking the ability to hear can make a dog more aggressive. However, there has been no substantial proof that this is the case.

Each Boxer has its own personality and temperament, and they have the same chance of developing an aggressive temperament as any other Boxer. This myth is simply not true.