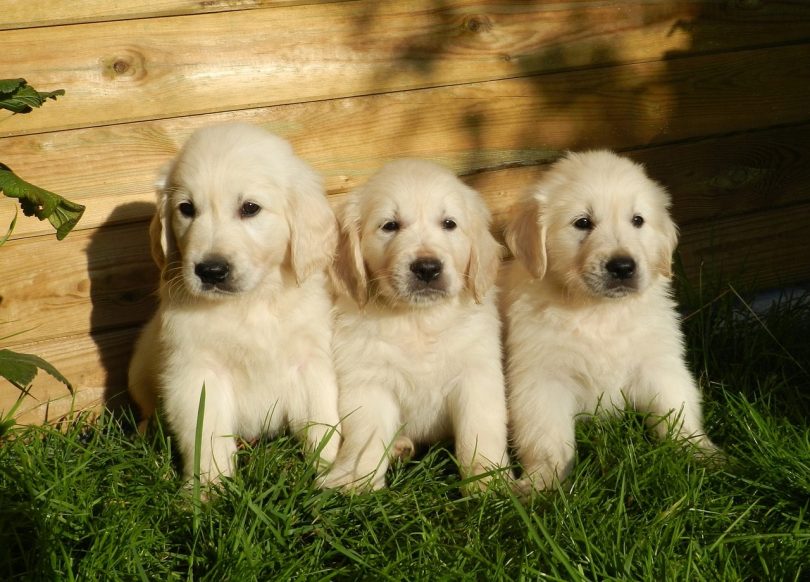 There are few dog breeds as friendly and affectionate as the Golden Retriever. As a matter of fact, they’re one of the best family dogs available. Goldens are a great balance between obedience and playfulness. They’re always well-mannered and get along great with kids.

And if you’re planning on raising a Golden Retriever, then you’ve already made a great decision. However, did you know that not all Golden Retrievers are the same color?

Despite their name “golden,” these dogs actually come in 5 various shades of “gold.” Each color is beautiful and unique in its own right. So, if you’re planning on bringing one home, you’ll have a difficult decision to make.

RECOMMENDED: The 9 Wonderful Colors of Dogs

Despite these dogs having 5 colors, not all are officially recognized as a “standard color” by the American Kennel Club. As a matter of fact, just the golden, light golden and dark golden are official colors.

However, if you don’t plan to show your dog or participate in competitions, then your Golden Retriever’s coat color really doesn’t matter.

Let us know which color is your favorite in the comment section below. And if you own a Golden Retriever, what color is your dog?

The cream color isn’t what comes to mind when you first think of a Golden Retriever. Yet, cream is still a widely popular color in these dogs. To call these dogs anything but a Golden Retriever is incorrect, though sometimes they get mistaken for Labradors.

The coat color of cream Golden Retrievers looks like an off-white. Furthermore, they’re much more popular in the United Kingdom than the United States, or anywhere else for that matter.

For this reason, they’re sometimes referred to as “English Golden Retrievers” or “English Cream Golden Retrievers.” And as you may have guessed, the cream coat color is not officially recognized by the American Kennel Club.

In other words, they won’t accept cream Golden Retrievers in the show ring. But if you don’t plan to show your dog, who really cares? They have the same great personality as any other Golden Retriever.

In your specific country, they may be slightly more rare. But on the international scene, they aren’t super special or uncommon.

Don’t be fooled by breeders that want to charge a high premium for these “ultra rare” cream colored Golden Retrievers.

Be on the look out for buzz words, such as “white” or “platinum.” It’s nothing more than a bad marketing tactic to try to sell you on their rarity.

Other than the obvious (color), there are some minor differences between cream colored Golden Retrievers and their other golden counterparts.

For instance, cream Golden Retrievers generally have a thinner coat, so you may experience slightly less hair around the home. However, they shed just as much.

Physically, the cream variations have rounder eyes with a stockier build. In some cases, they’ll have broader heads and a longer neck. Even so, they’re usually slightly shorter than the American Goldens.

The Red Golden Retrievers are strikingly beautiful. They’ll always have a lush coat in what seems like a mahogany red and highlights of amber hue.

The coats can be a dark brown, reddish gold, hence the name “red.” To the unfamiliar, they can often be confused with dark Golden Retrievers as well.

And like the cream colored Golden Retriever, the red variation is not recognized by the American Kennel Club and thus, not permitted to compete at shows.

This dark red color can vary quite a bit from dog to dog. However, to officially classify as a red Golden Retriever, the coats need to be redder than the “standard” dark Golden.

Origins of the Red Golden Retrievers

The origin story of these special colored dogs aren’t 100% confirmed. However, most researchers suspect that these red dogs originated from Ireland.

A number of historians believe that breeders were able to achieve this color by crossbreeding the standard Golden Retriever with the Irish Setter, thus getting this magnificent mahogany color.

It makes a lot of sense because the Irish Setter has this same hue of color. In addition, these red colored Goldens have a lot of physical features that resemble that of an Irish Setter. At least, more than a typical standard Golden.

Differences of the Red Golden Retriever

Make no mistake, these dogs are very much Golden Retrievers. However, there are a few key differences in appearance – other than the coat color.

Just like with the cream Golden Retrievers, these dogs tend to have shorter hair. Their hair can sometimes be straighter too – almost like a Labrador Retriever.

You can also expect these dogs to have less feathering on the legs and tail. However, it can vary because there is no official breed standard with Red Golden Retrievers.

As mentioned, the Dark Golden Retriever looks fairly similar to the red variation. However, the key difference is that they don’t have the amber or red hue. Instead, they’re a much darker shade of the standard Golden Retriever.

This is the first color of the Golden Retriever on this list that is actually recognized by the AKC. As a result, you are able to competitively show these dogs at AKC shows. Plus, they’re much easier to find with local breeders.

In terms of temperament and personality, they’re not much different from any of the other Golden Retrievers on this list. Despite the dark color, you still get the lively energy, cheerful attitude and friendliness of these dogs.

I would say the ears are a good guide to their true adult color, but they will probably always be a shade darker than the rest of his fur (especially when he gets older and gets his ‘mask’).

These dogs will almost always be born lighter in color, compared to how they’ll look as an adult. A good way to gauge how dark they will get is by looking at the color of the ears.

Literally the only difference is the darker coat color, which is perfectly fine. In fact, many owners think this color is the most stunning of them all. For the most part, I agree with them.

The Light Golden Retriever is another coat color officially recognized by the American Kennel Club. In fact, they’re one of the more popular colors and they’re literally everywhere in America.

The color is difficult to differentiate for the average person. However, dog enthusiasts and breeders will tell you that this color is somewhere between the standard gold and cream color variations of these dogs.

The light Golden Retriever may be the second most common color for Golden Retrievers – second only to the standard gold. You probably have seen a lot of these in your life, you just weren’t able to tell there was a slight difference in shade.

The light variation, like with the dark, also has the same temperament as any other Golden Retrievers. Colors don’t matter with these dogs, so expect to get a cheerful and loving Golden Retriever no matter what color.

At last, we have the standard gold, which is by far the most popular colors of Golden Retrievers, hence the “standard.”

They are the epitome of this breed and what most people imagine when they think Golden Retriever. They’ll always have a rich and bright golden coat that’s not too dark or too light. You’ll know when you see one.

There’s not much to say about this classic color of the Golden Retriever. You already know what they are and what they’re about.

There’s a reason why these dogs rank the 3rd most popular dog breeds in America. In fact, they have been top three for a very long time and there’s no reason to think they’ll slip anytime soon.

It doesn’t really matter what color your Golden Retriever comes in because at the end of the day, you are getting a dog known for an excellent temperament. Most owners raise them because of their personalities, before appearance.

They’re dogs that are pet-friendly, children-friendly, highly intelligent (4th smartest dog breed!), playful and super affectionate. What else do you need in a family dog and companion?

Though they do shed, especially during peak seasons, Golden Retrievers are relatively low maintenance – making them great for all types of owners. Like with most large dogs, they still require a moderate amount of physical activity on the daily basis.

Still, they aren’t anywhere close to an Australian Shepherd or German Shepherd in terms of exercise needs.

If you’re considering a Golden Retriever, look no further. They are some of the best dogs in the world. The only decision you need to make is what color you want.

And if you’re looking for a dog breed that’s a little more different, consider the Golden Retriever Husky mix.