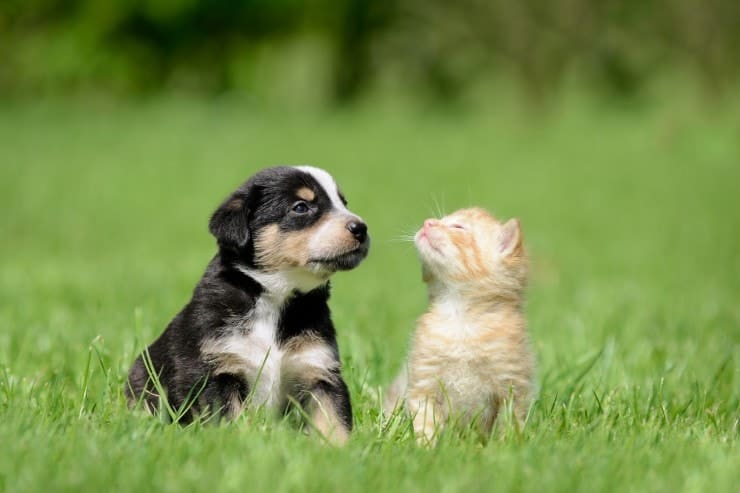 Before you jump to conclusion, keep in mind that all Australian Shepherds are different. It’s why some get along well with cats while others don’t.

Owners: Does Your Aussie Get Along With Cats?

Each dog/cat situation can vary depending on the pair. It’s why we found real answers from Australian Shepherd owners regarding how their dog gets along with a cat.

Here are 21 different stories that we’ve found from online forums, such as Reddit. We’ve edited some answers for better grammar and flow but meanings remain the same.

Our Australian Shepherd absolutely adores playing with cats. In fact, she’s very gentle with them.

I can tell she definitely wants to interact and play with them. However, the cat may or may not allow it depending on mood.

Funny enough, I’d say she likes cats more so than dogs. Plus, we have a senior cat and our Aussie gives her the respect and space she demands (because she’s been warned a few times).

My Australian Shepherd is fine with cats. Although my Aussie didn’t grow up with one, my in-laws have a cat.

My Aussie met the cat when she was just one year old. There wasn’t ever any aggression, rather she was just curious of the cat.

We got my Australian Shepherd when she was 7 years old. Still, she got along fine with our family cat.

At first, she’d be annoyed at the cat, but never aggressive in any way. All this happened while the cat desperately wanted to be her friend.

The cat would try to clean her face, sleep on her, and the dog just laid there annoyed. Although it took some time, our cat eventually taught the Aussie to love her back.

We have two Australian Shepherds. One likes to play with cats and the other likes to cuddle with them. Neither of them treat cats as prey.

We have three Australian Shepherds and they are all absolutely fearful of cats. The oldest will often growl and hiss our cats.

I have both cats and an Aussie. My previous dog ignored the cats and wouldn’t even look at them. However, the Aussie I have now is absolutely terrified of cats.

The cats know it and they torment her. Their relationship is built on: who can get on each other’s nerves more.

Our Aussie, named Rufus, loves every living creature he’s ever come across. Of course, we though he’d be happy to have a new friend – a cat.

So far, it’s been rough. Rufus doesn’t like having other animals in his house. He’s been aggressively barking at the cat, which he never does.

I own 2 Australian Shepherds and 2 cats. I think they get along fine as long as you raise them up together.

Although neither of my dogs have an issue with either cat, the male Aussie is definitely more gentle around them.

I own a miniature Australian Shepherd that I raised since puppyhood. She gets along great with my cat. In fact, i’d say they’re best friends.

I think it helps because they’re similar in size, so they can tumble and play with each other all day.

I have three cats and one Australian Shepherd. Pippie, our Aussie, doesn’t intentionally try to hurt them, but still loves to chase them. She’ll even boop them with her nose if they don’t start running.

One of our cat adores her and will often cuddle with Pippie. Another one will tolerate Pippie and occasionally play with her.

The oldest one hates our dog and has been afraid since day one (10 years ago).

I own a (almost) two year old Aussie that i’ve had since a puppy. He won’t intentionally try to hurt the cat but will chase after him for long periods of time.

However, the cat actually enjoys this most of the time – sometimes initiating the chase. As long as you raise your dog and cat right (with a lot of love), they’ll be kind and respectful to each other.

My Australian Shepherd, named Nami, enjoys chasing around my two cats. However, the cats don’t really care her my dog.

Nami loves to lick them but my cats will run away.  Nami has never been anything but curious when playing with the cats.

I own 4 Australian Shepherds and a cat. It really depends on your training method and the confidence of the cat.

Of the four, one is afraid of the cat. Two of them don’t really pay much attention. However, the last one loves my cat and the cats loves that Aussie. They’ll even groom each other.

My Australian Shepherd Callie gets along great with our cats. He’s being raised by cats and even steals her brother’s sleeping spot.

Cats and Aussies should be fine together. My Australian Shepherd loves my cat, but my cat hates my Aussie because he’s territorial. Still, they always play together.

We have a cat and it took my Australian Shepherd about 8 months to befriend the cat. He started by chasing and nipping at her but now will cuddle with the cat.

Our Australian Shepherd is one, but we have a 7 year old cat. Our cat grew up with a senior boxer (passed away last year) so we were hoping our cat would befriend the Aussie too.

Turns out the cat was much happier with the older and calmer boxer. Not as much with crazy and high energy Aussie.

I just picked up a 4 month old Australian Shepherd. The mannerisms and personality of this dog breed is so much different than any of my previous dogs.

The way they act around cats and how they “introduce” themselves is sooo Aussie-like. I’m beginning to realize how unique and great Aussies are.

My Aussie was trying to make friends with our neighbor’s cat the other day. Before I knew it, they were playing with each other! I was pretty surprised.

Our Australian Shepherd loves to chase our two cats. Although one will have none of it, the other is younger and braver.

In fact, he acts more like a dog than a cat, so he gets along with our Aussie fairly well.

I wish my Aussie got along with my cat! The cat will hiss and attack my dog. And after clawing my Aussie a few times, she’ll run away scared.

The cat will have an intense meow roar – it’s the craziest thing ever.

Although our sample size is small, we can (probably) assume that about half of Australian Shepherds will get along with cats.

This does not mean you put the two together and they’ll work it out. Socialization training is absolutely necessary and crucial to make things work.

48% of the owners say their dog(s) get along great cats. However, most owner followed up saying that the friendship wasn’t at first sight. For most cases, it took some time for them to get used to each other.

33% of the Aussie owners said their dog has an okay relationship with cats. This could mean they acknowledge each other but don’t enjoy playing with one another. It could also mean that one cat liked the dog and one didn’t – or vice versa.

The remaining 19% said their dog does not get along with the cat. Sometimes, personalities just don’t match and it’s difficult to change a pet’s personality.

It can be a nerve-wrecking experience bringing home a new puppy to a home full of cats (and vice versa). It may not be a smooth transition most of the time, as these animals are drastically different.

However, it is possible to develop a loving relationship between an Australian Shepherd and a cat. Here are some tips from real Aussie owners.

Reddit user seph_martin stresses the importance of socialization training for these situations. The user mentioned that “all behaviors can be trained with enough patience.”

For example, seph_martin recommends getting some good play and exercise with your Aussie to tire them out. Once they’re tired, you can bring out the cat because they’ll be less hyperactive.

Bring the treats out and continuously provide positive reinforcement (praise and treats) every time they manage to stay around each other for 30 seconds.

Of course, increase the duration together over time. If the dog starts chasing the cat, remove them both and end playing/training time until they’re calm.

Getting a Safe Space for the Cat

Another user recommended keeping the cat in one room, at least until the two are comfortable with each other. As they socialize more, he’ll slowly let the cat out under supervision for longer durations.

He concluded by suggesting cats need to have a safe space where they can hide when they feel threatened.

Hunter3657 chimed in suggesting to crate or leash restrain the Australian Shepherd until the dog is used to seeing the cat without the urge to chase them. Just make sure the dog knows biting is never okay.

The problems is their intense energy and activity, which could put off a lot of cats. In response, the alarmed cat may attack back.

The key to getting your cat and dog to develop a good relationship is persistence with socializing. It may seem impossible in the beginning, but it’s not. All these stories you’ve read are true stories.

My Suggestion on Aussies with Cats

In my opinion, a slow and steady desensitization process is necessary. This means regularly exposing the dog and cat, but under strict supervision.

The more they’re exposed to each other, the more comfortable they’ll be with one another.

If things get rowdy, pull them apart right away. The last thing you’ll want is for either animal to go through a traumatic experience, such as an attack. It would be taking a step forward and multiple steps back.

I agree with seph_martin in regards to using positive reinforcement. If you see them playing with each other or even cuddling, always give them praise and possibly a treat.

This is important because it lets them know that what they’re doing is “positive behavior.”

Never force a cat to play with your Australian Shepherd. If it takes longer, then it takes longer. There’s really no point in forcing a friendship between two very different animals. It could cause more harm than good.

Did i miss any great tips for introducing your Australian Shepherd to cats? If i did, leave a tip in the comments section below!