But what actually makes these dogs look the way they do? Are there any benefits of choosing a Blue Merle over another colored Australian Shepherd? Disadvantages? Here’s the complete guide to the stunning Blue Merle Aussie.

Colors of the Aussie 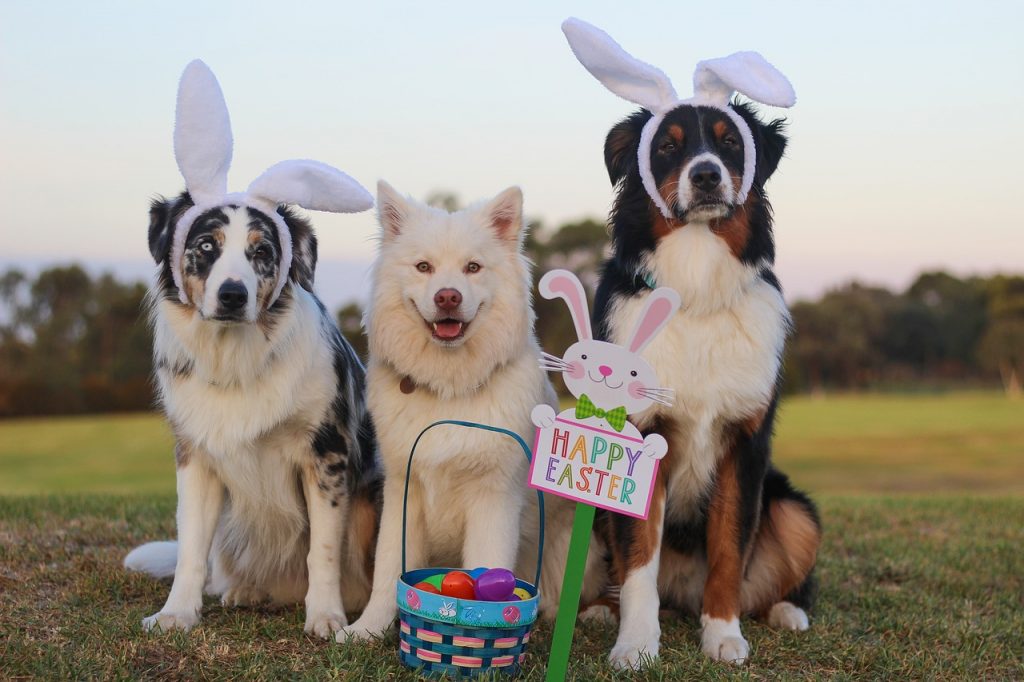 As you may already know, there are many, many colors of the Australian Shepherd. Some more common than others, but all gorgeous and beautiful.

The four basic coat base colors of the Australian Shepherd includes:

Though we’re only going to be covering the blue merle in the article, the others are just as great. Keep in mind that these four colors are the colors officially recognized by the American Kennel Club.For more information, check out the AKC website and click “breed standard.”

There are many other colors for these dogs, such as sable, yellow and other dilute colors. However, they’re extremely rare and aren’t considered completely ethical to breed.

So, why get a Blue Merle Australian Shepherd? Whether you have a black-tri, red merle or blue merle Aussie, there really is no difference other than the “cosmetics” or appearance. They’re the same great dogs with fantastic work ethics. They’ll even love you the same as any other Aussie.

However, there are things to consider when debating on whether you want to get a blue merle.

Merle-colored Aussies, especially the blue merle, are highly sought after. They’re not the most common, but they are in high demand. As a result, you can expect to pay higher prices for these dogs.

In the past, most reputable breeders did not charge extra for color choice. But with a sharp increase in demand for blue merles, many breeders have opted to charge a premium.

For example, in this reddit post, a user is claiming that a “reputable” breeder is charging him more for both merles and tri-colors. As a matter of fact, he claims he would need to pay $800 for a tri-color and $1000 for a Blue Merle Australian Shepherd.

Of course there are other factors, such as lineage and gender. But considering the average price of an Australian Shepherd can be $650 on the low end from a reputable breeder, this is a pretty significant premium.

In general, Australian Shepherds are relatively healthy dogs. This is especially true if they’re a pure Aussie from a reputable breeder. However, there are health issues that may arise that are much more common with blue merles.

For example, Coloboma is an eye condition that affects the Aussie’s iris. The dog’s iris doesn’t fully develop, so it doesn’t work as well as a normal Aussie eye.

In other words, the eyes of the dog won’t be able to dilate or contract properly. What this means for the blue merle is that they will be very sensitive in bright light, which can cause a lot of long-term discomfort for them.

This gene is not exclusive to merles. Even non-merle Aussies can carry this gene, though not as frequently observed. Always make sure to ask the breeder about eye conditions of the parents and lineage if you want to keep a Blue Merle Australian Shepherd.

The blue merle is not one specific coat color. Rather, there are four distinct variations of the Blue Merle Aussie. Some are much more common than the others. However, all are beautiful and unique. 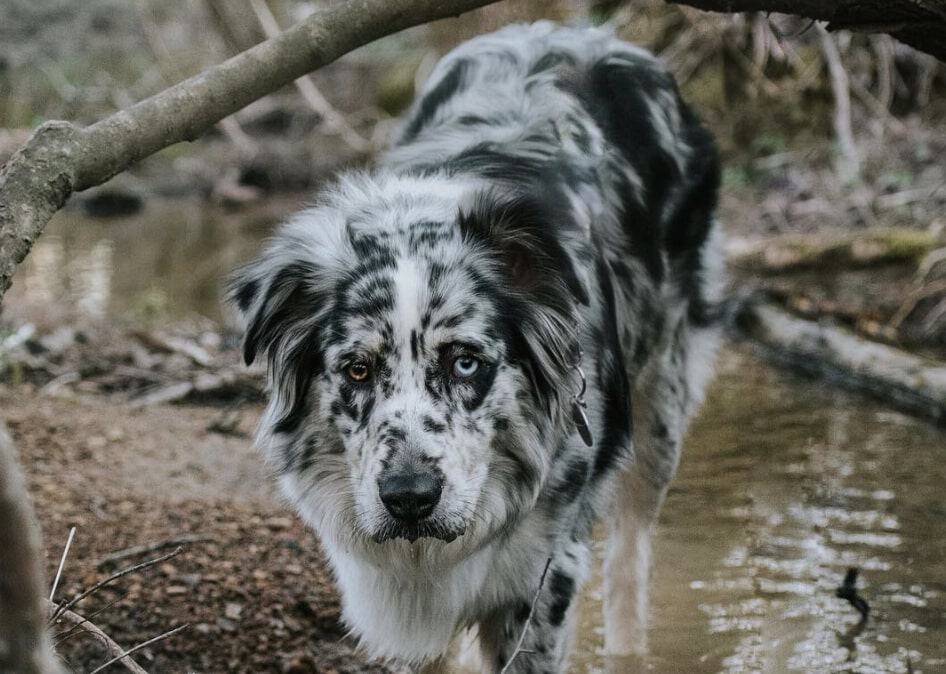 Despite these dogs being classified as “blue merle,” Solid Blue Merle Australian Shepherds are not as common as you think. Their coats have a base color of gray, with black spots or patches. The patches can appear all over the body and can be in many different shapes and sizes.

There should be no other color markings on a solid blue merle, including the popular white and copper/tan markings. In any case, these dogs are great and have an unusual appearance that makes for a good ice breaker or conversation starter. 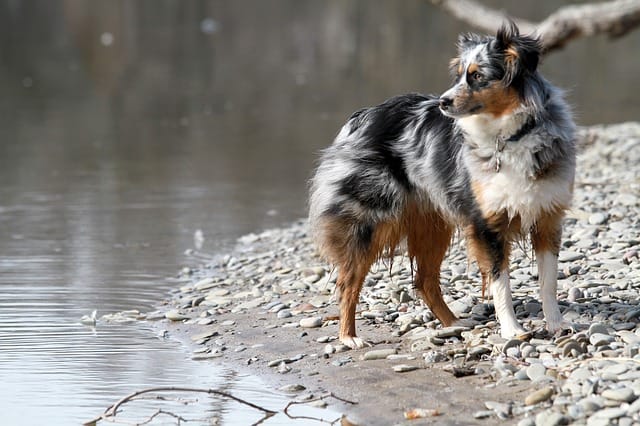 The Blue Merle Tri Colored Australian Shepherd is perhaps the most common among the four variations. In my opinion, they’re the most beautiful because they have deep rich contrasts in colors. They may even be my favorite color variation of all time for Aussies.

Again, these Aussies have a base coat of blue merle, which is black patches on a gray/white coat. Though the patches will vary in size and appearance, there is always a gray back.

But what’s unique about the blue merle tri is that they have highlights of white and copper/tan around the muzzle, ears, legs, bottom and chest. As you can imagine, these dogs are elegant and unique – some of the world’s most beautiful dogs. 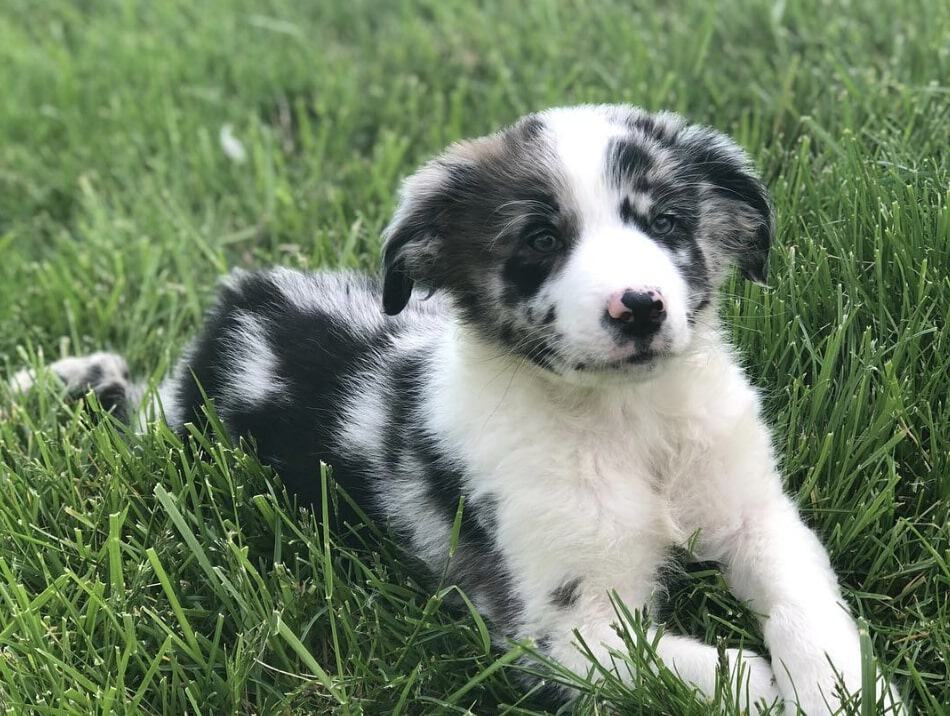 The Blue Merle and White Australian Shepherd is a merle variation as marvelous as the blue merle tri color. As a result, they’re considered the second most popular variation among blue merles.

These dogs have the iconic blue merle coat as a base color. However, unlike the tri color, these Aussies do not have the copper and tan markings on the coat. Instead, they only have white markings.

Without the tan markings, they can look a little bit like a Siberian Husky. For that reason, blue merles with white markings are often mistaken for huskies, especially in their puppyhood months.

Despite the lack of contrast on the coat, these dogs are downright jaw-dropping. If you see one, you’ll have a hard time taking your eyes off them. 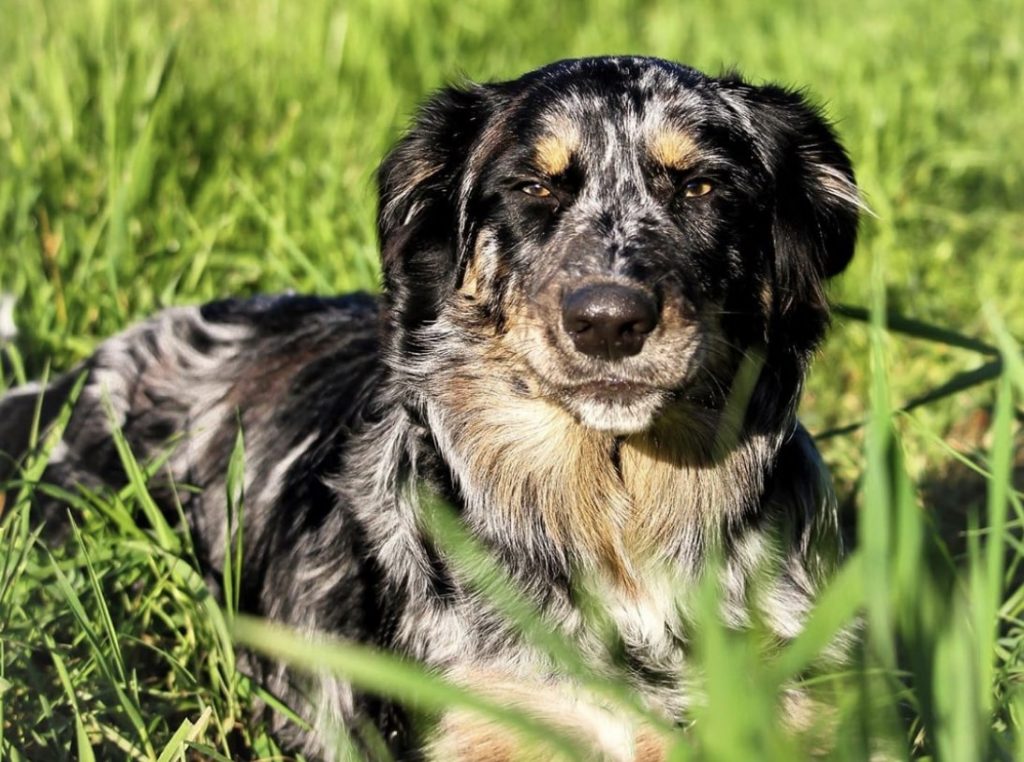 Although beautiful in their own right, the Blue Merle and Tan Australian Shepherd is not very common. These dogs come in a splendid blue merle (black patches on gray fur) with only tan/copper markings.

Still, these dogs are seen from time to time. But if you’re looking specifically for a Blue Merle and Tan Australian Shepherd, you may have a difficult time doing so. 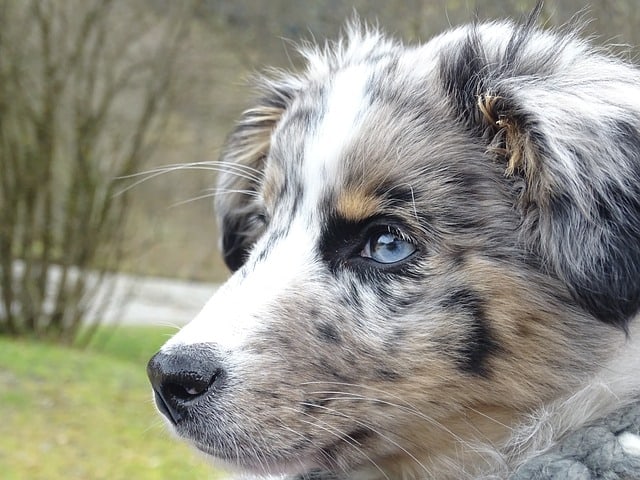 A Blue Merle Australian Shepherd is much more than a uniquely colored coat. Even their eyes can be special in terms of coloring. Yes, it’s true that most blue merles have solid eye colors.

However, most of these dogs will have specks of colors on their colored eyes. We call this “marble eyes” and they’re amazing to look at.

The solid eye colors of blue merles include either brown or blue. And in some instances, blue merles can have eyes with two different colors (one blue and one brown).

Though there’s potential for many variations of eye color with the blue merle, most of them will have blue eyes with brown specks.

If you ever wondered how they became like this, then you’re not the only one. According to the ASCA, the merle gene determines whether the dog is merle – either red or blue merle. We call this gene an “incomplete dominant.”

For the blue merles that you see, only one copy of this is necessary. When you have two dominant copies, you get what’s called a “double merle,” which will produce a dog that certainly has serious health problems. These issues can range anywhere from eye defects to deafness.

Contrary, two recessive copies will product a non-merle Australian Shepherd. Having one of each is the sweet spot and will produce a merle Aussie. 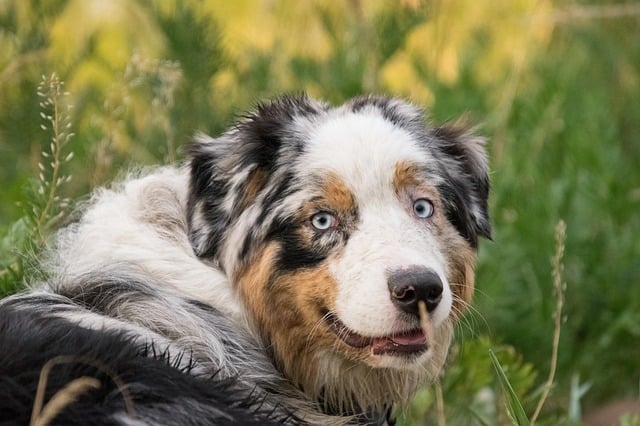 Currently, there are no studies that show coat colors of Australian Shepherds affect temperament or personality. There are on-going research studies, but still nothing as of yet.

With that said, the biggest influence on the temperaments of these dogs are in your hands. For instance, Australian Shepherds are hyper active dogs that need to work. Whether it’s obedience training, running, herding or dog sports – they need something to do.

Without proper physical and mental stimulation, these dogs can exhibit destructive behavior. If you don’t want your couch destroyed, make sure you have the time and patience to keep these dogs working.

By providing your Aussie with sufficient socialization, obedience training and exercise, you’ll have a happy and healthy dog. For the most part, they’re quite optimistic and friendly dogs. They’re full of energy and have a lively personality.

Not only are they highly intelligent dog breeds, but they’re also hard workers. So if you’re able to assign them daily tasks, such as herding, they’ll thrive at their “jobs.”

For potential dog owners that want to lounge around and cuddle with their dog, I do not recommend a Blue Merle Australian Shepherd – or ANY Aussie.

If you’re worried that your blue merle will be “different,” don’t be. They are the same dogs with a great personality. You may have to pay a little more or deal with potential health problems, but for the most part, they’re just normal Australian Shepherds.

They’re such beautiful dogs that you’ll certainly turn some heads at the dog park with these highly attractive blue merles.

Do you own a Blue Merle Australian Shepherd? Let us know what you think in the comments section below! Also, tell us which blue merle coats you like the best!

I have a blue Merle and white with a solid black split face on one side. He also has two marble split eyes, both are blue/brown split, one vertical and one horizontal. He is magical to look at. As far as them not being “cuddlers” - mine must be the exception, because on the couch with his head in my lap is what he lives for....his name is Patches (of course!)

My Blue Merle Aussie is an old lady now at 14.5 years. But she still figures out things she needs or wants. I’ve never known a dog so capable of solving things. As a young girl I mistakenly bought door handles with flaps (not round). She quickly figured out how to open closed doors. Had to lock bathroom doors for privacy! She is a velcro dog, attached to me. The feelings are mutual. Recently we bought a bucket with a screw on lid for the dog food. I caught her a couple times using her nose to unscrew the lid & I stopped her. One evening I was out of town working & my husband was late getting home. She opened the lid. She fed herself and our Red Tri Aussie Male (4 yrs old). They ate all the food. They team up & they try to con us often If I feed them they tell my husband they haven’t had dinner yet. They are very conniving. If the water tank goes empty & we didn’t notice she will bring the entire unit into the living room & drop it in front of us & then just look back and forth between the water tank & us. Before she became blind (which doesn’t change her abilities much) she used to watch TV. When an animal went off the screen she would jump up and look behind the TV to see where the animal went! Now that she has lost her sight we still go on off leash walks. I watch closer to keep her safe, but she follows me by smell. She such a wonderful girl. It’s sad that she is getting old. I can’t imagine my life without her at my side. And yes, oh my god does she shed! That’s life with an Aussie & worth all the effort.

I love my female blue Merle- she looks so much like Marble I named her Granite. She is very smart. She catches onto tricks quickly ( with treats of course) however she is high energy. you must walk her, let her run, and play with her a lot. If one doesn't have time for that then this is not the dog for them. She is 8 months old and has recently started chewing on furniture. I have had to up my energy level to keep her occupied to avoid this behavior. thank you for the info on your page.