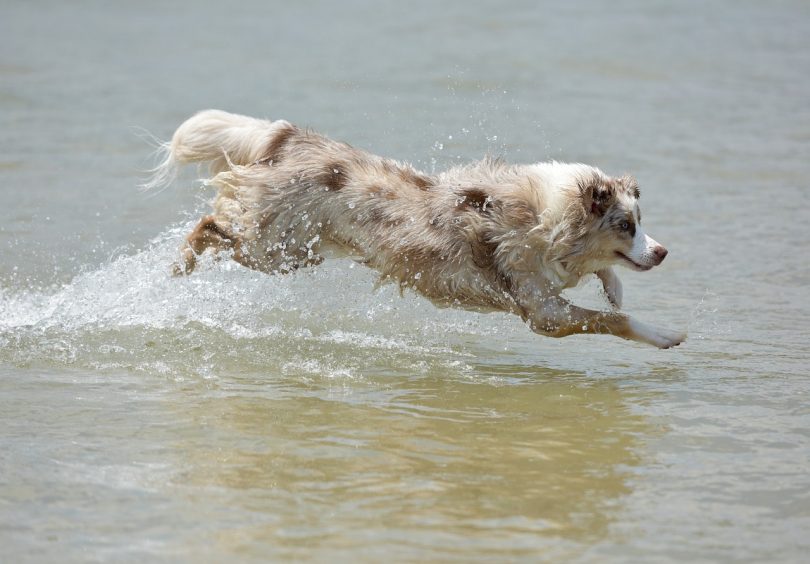 Picking a new dog to bring home is one of the most exciting things. And if you’re thinking about getting an Australian Shepherd, you’re on the right track (pun intended).

But as a physically active owner, you may be interested in a dog that can double as your running partner. So, will Australian Shepherds run with you?

Yes, Australian Shepherds will run with you and love doing so. They’re some of the hardest working dogs and have what seems like unlimited energy. Providing them the opportunity to run keeps them mentally sharp, physically fit and healthy overall.

Now lets examine exactly why Australian Shepherds make such great running partners. Plus, we have some essential tips from real owners when it comes to running with your Aussie.

Why Running is Good for Aussies 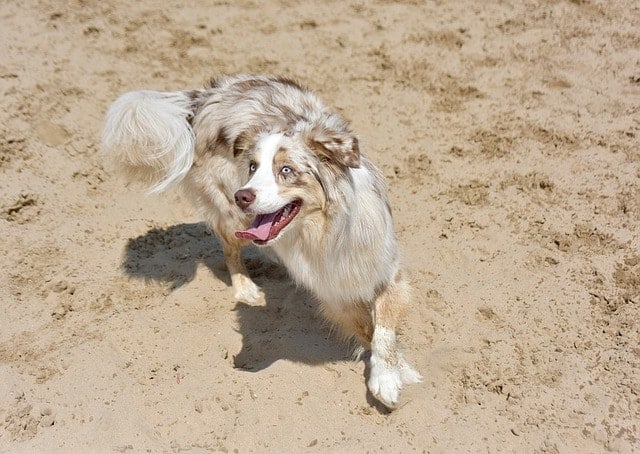 Australian Shepherds need plenty of physical activity and exercise. As herding dogs, Aussies have a ton of energy that needs to be expended on a daily basis. In addition to running, it’s why we recommend letting your Australian Shepherd swim.

With 30 to 60 minutes of physical activity, they’ll need high-energy activities such as running, frisbee or swimming. These intense activities require more energy, which makes sense why less time is needed for these energetic dogs.

But with less intense activities, such as walks or a stroll through the neighborhood, Australian Shepherds will need nearly two hours of activity. It’ll vary depending on your dog. Some Aussies are inherently more energetic than others.

Australian Shepherds are energetic dogs, but can also become destructive when their energy isn’t dealt with. They have been known to exhibit destructive behavior. Everything from excessive chewing to barking for long periods and lacking obedience can happen.

Exercise, such as running, doesn’t just keep them physically healthy but also mentally healthy. Providing an outlet like daily runs can help them develop a better relationship with the owner and stimulate both mind and body.

Owners: Will Your Australian Shepherd Run With You? 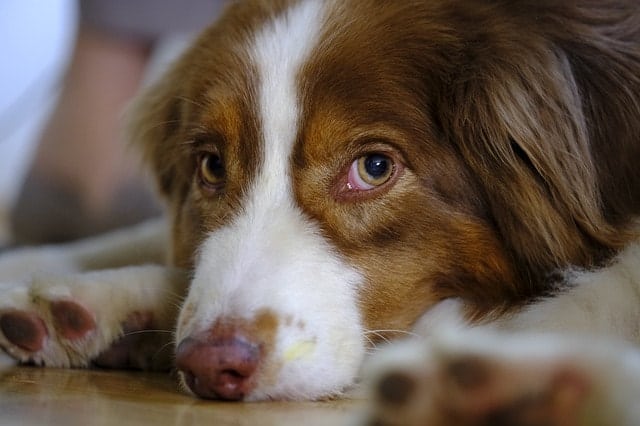 To truly answer your question, we asked real Australian Shepherd owners if their dog will run with them. We surveyed the popular Aussie sub Reddit and collected responses from owners on the forum.

Here’s what the owners had to say to the question:

1. Janvt says [YES]: “Took my adventure pup on a run up the Großer Mythen in the Alps today. Love trail running with this maniac!”

2. Piratefight says [YES]: “My Aussie loves running with me and running next to my bike. I’ve taken him on 6-8 mile bike rides and he’s ready to play for another hour when we get home.”

3. Invalid_credentials says [YES]: “Our girl, Zoey, LOVES to run next to the bike! We started her off on a running leash that you would usually strap to your waist, tied her to the bike and got her going slow. After a few trips strapped on she figured it out and runs right alongside.”

4. Rlzsweetness says [YES]: “My Aussie loves running. She gets excited anytime she sees someone is running clothes (somehow she can distinguish between workout clothing and regular clothes) putting on their shoes, she will go and stand by her leash and wait.”

5. Maxstout808 says [YES]: “After running [with my Australian Shepherd] through the deepest forests of Maui for 8+ hours, she is finally tuckered!”

6. Yourbaristahatesyou says [YES]: “My Mini Aussie was the best little training partner I could ever imagine. I started training with my pup so he could build up to the distance too, and he ended up running up to 11.5 miles with me and did very well. That’s one way to for sure tucker out a high energy dog.”

7. Bluelotusgenie says [YES]: “My partner is a runner so…they will run together and then I’ll walk with him for 30 mins. On weekends I can give him more.”

8. Shaylenn says [YES]: “We also took our Aussie running next to one of us bike riding, but she just built up more and more stamina and we created a monster who wanted to ride/run for hours!”

9. Madamemoriarty says [YES]: “Nim’s two favorite things are running and following me everywhere so it’s pretty easy to keep him in line. I just stop the bike anytime he tries any funny business and won’t go again until he sits nicely on the right side.”

10. Rcjeng says [YES]: “I love running with my Australian Shepherd. Fortunately they love to run with me at every chance they get. If I grab the running leash and put on some sunscreen, they already know were going for a run and they get super excited.”

Not all dogs are the same, and there may be a small chance that you end up with an Australian Shepherd that actually doesn’t enjoying running with you. However, we think the odds are slim.

Tips for Running With Your Aussie 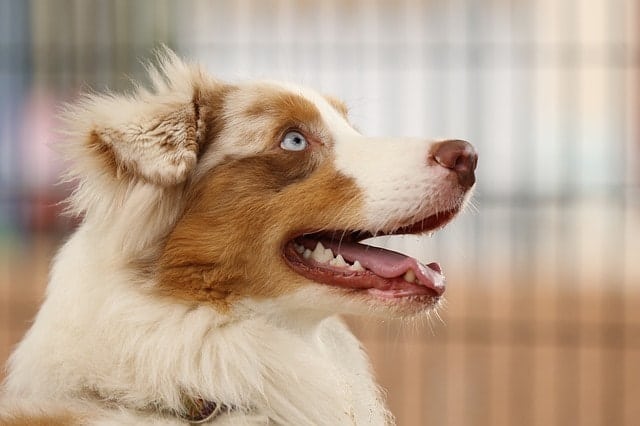 Being able to run with your Australian Shepherd is every active dog owners’ dream. However, there are some things you should look out for. Without proper precautions, your dog may be at risk to injury and other long term health effects.

We decided to ask real Aussie owners for their best dog running tips. As a result, here are the most popular tips and advice for running with your Australian Shepherd.

1. Use a Pulling Dog Harness

Getting a pulling harness to run with your Aussie is a great idea. Not only will this keep your dog in check but also prevent them from hurting themselves while pulling.

Many Aussie owners suggest using this pulling dog harness. It’s fully adjustable to make the harness non-slip and the fleece lining adds extra traction. It also comes with a shackle snap for quick release when necessary. Check it out here:

There’s a “golden rule” when it comes to running with your dog – not just Australian Shepherds. While in the middle of your run, it’s not unusual for your dog to start panting during a jog. It’s how they’re able to cool down their bodies.

However, if your Australian Shepherd stops panting, then they run the risk of a heat stroke. The problem is that it becomes increasingly more difficult for your Aussie to pant when full-on sprinting.

Always keep your speed at a reasonable pace and make frequent stops for your Aussie to catch his breath. Frequently check on your dog to make sure they’re panting. The last thing you’ll want is to watch your dog faint from the intense heat.

While all Australian Shepherds enjoy running at an early age, it’s not a great idea to let them run relatively long distances as a small puppy. They may run in short spurts, but long distance will put too much strain on them.

Running for long durations as a puppy will cause potential joint issues in the future, such as arthritis or hip dysplasia. Young dog bones and plates need to be fully matured before doing such activities.

With that said, you shouldn’t run with your Australian Shepherd until they’re about one year to 18 months old. At the very earliest, your dog needs to be at least 8 months old. Closer to 18 months of age for running longer distances, but it depends on the breed and dog.

Like humans, Australian Shepherds need to be conditioned to run longer distances. Sure, it’s not impossible for the dog to run 6 – 8 miles at a time, but don’t expect them to do it the first time around.

These dogs will continue running even when it’s causing harm because that’s what great working dogs do. It’s up to you (the owner) to manage their running duration and distance.

Start off with shorter distances in the beginning. Many owners suggest starting off with just one mile and going from there. You can slowly increase the distance and pace as they get adjusted. Also, starting off slow gives you a chance to set a benchmark.

When running with Australian Shepherds, it’s best practice to teach them some obedience commands first. You never know what you may run into that may trigger something in your dog.

For example, some popular commands that Aussie owners suggest are “slow,” “turn,” “stop” and pull. This is especially important if you plan to bike while your dog runs. It makes it much easier to direct your dog while on a bicycle.

Training them to obey these commands may take some time, but it creates a safer experience for you and your dog. It’ll be worth it if you spent a little time and effort towards this.

So do you run with your Australian Shepherd? Tell us how you were able to train them to run alongside. And do they enjoy running with you? Let us know in the comments section below!