Do Australian Shepherds Have Tails? – The Truth About the Bobtailed Aussie

Many Australian Shepherds are bobtailed dogs with no tails, while others do have tails. And despite popular belief, the Aussies without tails are not always docked – like with the Pembroke Welsh Corgi. In fact, 1 in 5 Australian Shepherd puppies are born without a tail.

Now that we know Aussies both have tails and don’t, let’s dive into why this is the case. 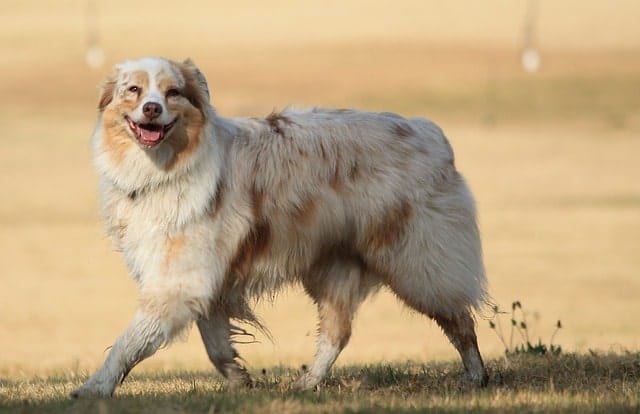 Roughly one in five Australian Shepherds will have a natural bobtail, meaning they were born without a tail. However, many owners decide to cut their tails for aesthetic purposes or to comply with the “standard.” So, not all tail-less Aussies have a naturally bobbed tail.

For dogs with tails, the length can vary considerably depending on the dog and bloodline. However, for the Australian Shepherd, the number of vertebrae should vary by just one or two.

A normal Australian Shepherd’s tail will taper, with the vertebrae getting smaller as it reaches the end of the tail. But with a bobtailed Aussie, a lot of the end vertebrae will be missing. Without the tapering effect, this creates a blunt-like tail.

According to an ASHGI data survey in 2010, roughly 47% of naturally bobtailed Aussies have tails a quarter length or longer. In addition, 10% of these dogs had a kink in their tails (curved tail).

Why Are Most Aussies Tail-less? 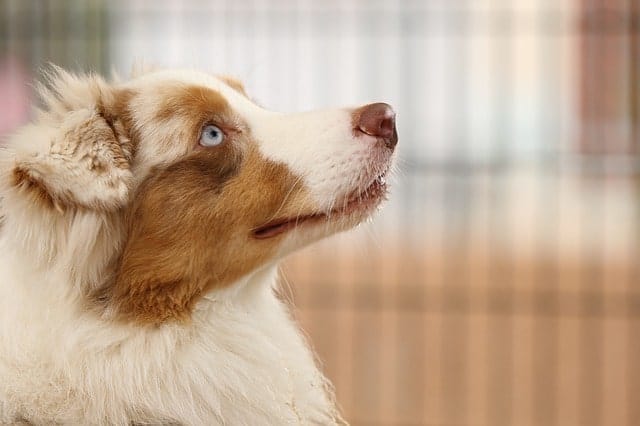 Most Aussies get their tails docked within three days post-birth. There are a lot of reasons for this process, but there are two main reasons.

First, a lot of Australian Shepherds born with a tail have a blunt tail without any tapering. It doesn’t look aesthetic because its not a normal looking dog tail. In many cases, it looks as if the dog’s tail was cut halfway.

The second most common reason is that there is a kink in the tail – or rather, a curve. These kinked tails are viewed as a malformed tail among Australian Shepherds. In other words, curved tails are not desired by dog owners.

Aussie puppies only need one copy of this gene to be born with a naturally bobbed tail. Puppies with two copies of this gene can put them in a fatal situation. They typically don’t make it.

The bobtail gene, otherwise known in the scientific world as the T gene mutation C189G, can determine whether a puppy is bobtailed, but doesn’t determine the length of the tails. Even bobtailed Aussies can vary in length of their stub tails.

In addition, the gene doesn’t determine whether the tail is straight or curved. All the other traits are controlled by other genes or the bloodline DNA.

Why Breeders Cut Tails Instead

Since knowledge of how Australian Shepherds are born without tails is available, one question come to mind. Why don’t breeders breed natural bobtailed Aussies instead of cutting them off?

Breeding specifically for the bobtails in Aussies is a complicated process. In fact, most of the time, it’ll likely result in dead puppies. And no one wants that, let alone breeders that need to sell puppies.

On top of dead puppies, there are a number of complications that may arise. One, for example, is spina bifida. This mutation is when the tail/anus area fails to properly develop. It’s truly a terrible sight to see and almost all the dogs with this mutation don’t make it.

If you want to learn more about spina bifida or other problems that come with breeding bobtails, you can read about it here. Just be warned if you try looking up images of this mutation.

Another big reason why breeders don’t specifically breed bobtailed Aussies is because of the potential negative effects on the gene pool. By doing so, you’d be limiting the variety of different genes in the pool.

There are only so many Australian Shepherds in this country actively being bred. A more selective process can mean producing a less robust Aussie.

Lastly, by concentrating on breeding for natural bobtails, breeders may have to ignore other important aspects of the Australian Shepherds. I would argue temperament, colors, work ethic (for herding) and health are all much more important. 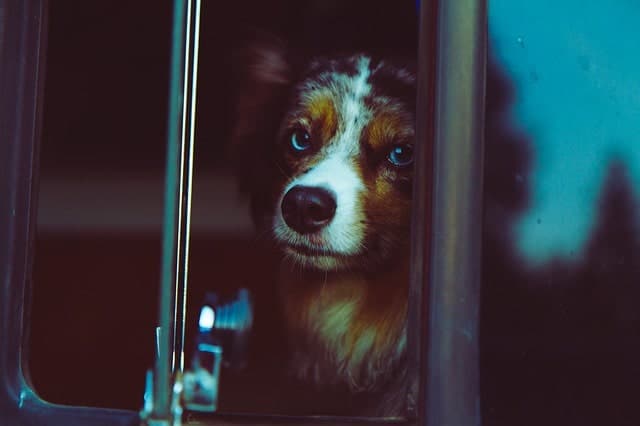 A common question among new owners, and rightfully so, is: does it hurt? Do the Australian Shepherds feel pain when getting their tails docked?

There’s been a lot of debate on this topic in recent years. Before I discuss this matter, it’s important to know that puppies get their tails cut 2 to 5 days after birth.

Advocates will tell you that docking an Australian Shepherds’ tail in this early phase isn’t painful or uncomfortable. They argue that puppies haven’t developed a nervous system yet. In other words, they can’t feel pain yet.

People have started to argue that puppies actually do develop at least a basic nervous system post birth. In fact, some suggest that puppies and adults have a similar sensitivity to pain. This new development is quite alarming considering how common this practice is.

How They Cut an Aussie’s Tail

Tail docking is the surgical removal of a puppy’s tail, for various reasons – including injury-prevention and cosmetic purposes. There are two popular methods of docking a dog’s tail.

The most popular method is by cutting the tail off with a pair of scissors. Yes, a good old-fashion pair of scissors. This means cutting through tendons, cartilage, muscles and potentially several nerves. In addition, this process is carried out without any anesthesia or pain killers.

Another method is by using a tight rubber band to cut off the blood supply to the tail. When sustained for long enough, the tail will eventually drop off. However, this is a less common practice.

The debate on whether these puppies feel pain has been ongoing with no definitive conclusion. The fact is, most puppies produce shrieks and other intense vocalizations as soon as the tail is cut. This continues as the professional is patching up the wound of the tail.

Sure, the sound of pain can be subjective, but it’s certainly not a sound of joy. In my opinion, the dog is definitely feeling discomfort at the very least.

The counter argument is that there are a lot of puppies that get their tails docked while asleep. And yet, they don’t even wake up. Could it be that puppies are over-dramatic while awake?

Whether they actually feel pain or not, they’re not likely to remember their tails being docked at such an early age.

Why Do Australian Shepherds Need to Cut their Tails? 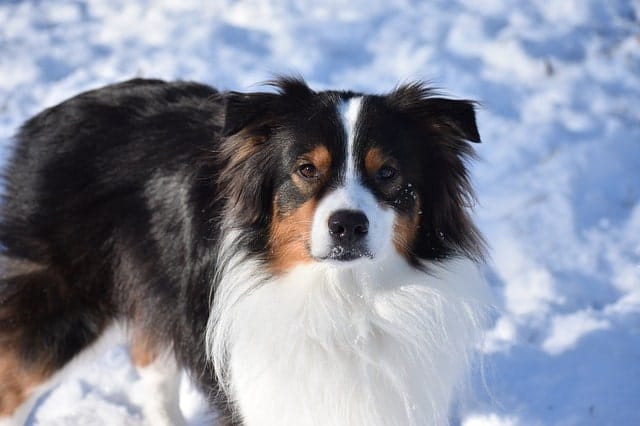 Whether an Australian Shepherd puppy feels pain or not during the process, there are several reasons why they do this. It’s not only about cosmetics and aesthetics. Let’s examine the top three reasons why.

When it comes to Aussies, this is the most important reason. These dogs were bred to be skilled herders in the western region of the United States. Unfortunately, the terrain and environment in this region is not ideal for most working dogs.

There are plenty of weeds, tall grasses, shrubs and other potentially dangerous hazards in this part of the country. All of which, can potentially hurt the dog’s tail. All it takes is for their tail to clip something while running full speed. And trust me, they run fast.

Tail injuries can be very painful for the Australian Shepherd. Not only can it cause a lot of pain, but it’s relatively difficult to treat. By docking the tail, it removes the possibility of such an injury, especially at work.

Although this may not be the best reason, it’s still an important reason among owners. Dog breeds with a thick coat, such as the Australian Shepherd, are prone to collecting debris on their fluffy tail.

In addition, it’s common for feces (dog poop) to get caught on the tail due to its proximity to the anus. So, by docking the tail, it reduces this insanitary mishap and increases dog hygiene.

However, would it be so bad to spend a few more minutes a day wiping the tail/anus area of your Australian Shepherd?

Because Aussies were originally bred for a role where this process made more sense, this has become the standard for the breed. Going back to the first point, it was used as a preventive measure. Fair enough.

However, how many Australian Shepherds in the world are still herding livestock? If you just want a great companion family dog and you live in a more favorable environment, these points aren’t as valid.

It’s important to know that two naturally bobtailed Aussies should not be bred with one another. All the professional breeders will know this, so this is mainly for the amateur breeders.

This is especially true if the dogs have short bobtails. Doing so can come with a lot of potential health problems and in some cases, death. Some problems include spina bifida and other lower spinal cord mutations.

Roughly 2% of all dogs producing natural bobtailed puppies needed to be put down. However, this survey includes all breeding dogs, including non-bobtails. With that said, the percentage of breeding two natural bobtails together is certainly much higher.

Note: If you’re looking for an Aussie with a tail, consider looking into one of the many Australian Shepherd mixes here. Many of them do have natural tails.

I find the excuses for tail docking practically unnecessary, and cruel. Most of us who have Aussies aren’t running ranches with them, they’re pets! My mini Aussie (& most of his litter mates) were asked to KEEP their tails. And what a magnificent tail it is! It’s an absolute FOUNTAIN of majestic ombré shaded fur, the tail hair is long and silky, and the tail curls aesthetically when the dog is happy. Despite all that fur, I have NEVER had an issue with feces sticking to it- not once! I stayed in contact with some people who adopted my Aussie’s siblings, and they said if they knew how gorgeous a tail it would be, they also would have asked to keep it instead of traditional docking. Frankly none of us can fathom WHY docking is the norm, when related working dogs like Border Collies keep THEIR tails, and their tails are very similar (though not as beautiful in my opinion). I think the real reason is that morally troublesome idea of eugenics in breeding, the “purity” of aesthetic ideal (set by humans, and causing many health problems for breeds). I hope someday certain practices like aesthetic ear and tail docking be criminalized. They do nothing but harm to the dog, and create an unrealistic, bizarre beauty standard.