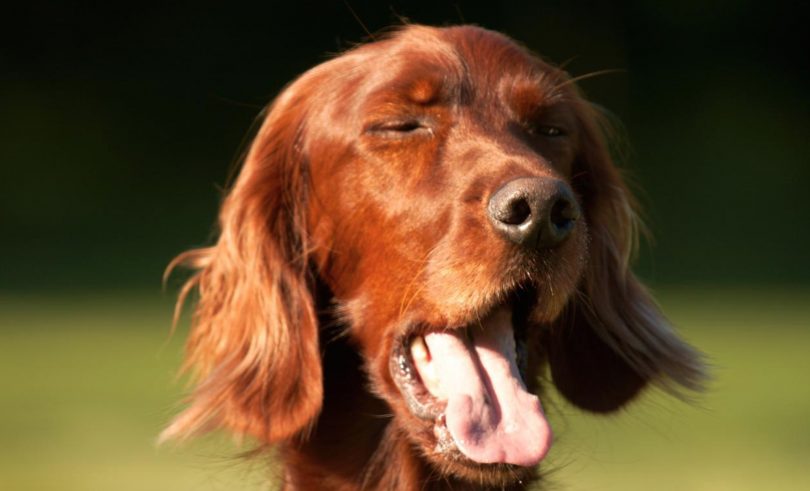 Sneezing is generally provoked by some kind of allergen or other foreign irritant in our nose and/or pharynx. Our body responds by making the effort to expel and eliminate the irritation through an expulsion of air. Unsurprisingly, this common bodily response system actually happens in dogs as well.

The same reasons that cause us humans to sneeze can also cause a dog to sneeze. However, sneezing is far more common in humans than it is in dogs. A dog’s nose is estimated to be 40 times stronger and more sensitive than a human’s nose.

Despite the glaring gap and an obvious shape difference, dogs and humans have very similar anatomical nose systems. And because dogs also have sinuses, you can be sure they experience those dreaded headaches and nose congestions.

Let’s further investigate why dogs sneeze. But before we move on, I want to note that sneezing and reverse sneezing are two different things. Reverse sneezing is a reflex where the dog brings in air to remove any irritants behind the nostrils. Refer to that article if that is what you are looking for.

What Causes a Sneezing Dog?

There are many things to consider when trying to figure out the root cause for your dog sneezing. There are just so many environmental and physiological factors to look into. If your dog’s sneezing is a serious and consistent problem, always consult with your local veterinarian. Here are the most popular reasons why your canine’s nasal passageway may be getting irritated:

This is probably the number one cause for sneezing in humans, so why not your dog? Keep in mind that a dog’s nose is much, much more sensitive than ours. The amount of tree pollen is high in the transition season between spring and summer. In addition, grass pollen becomes fairly common going into mid-summer. However, in the fall, other plant fibers and pollen grains are most present in the air.

When deciding whether allergens are the culprit for your sneezing dog, you must consider that dogs are usually allergic to just one of those pollens. And because each type of pollen will last no more than a month, a dog with an extended period of sneezing usually isn’t the victim of seasonal allergens. In addition, only a very small percentage of dogs are actually allergic to anything inhaled that isn’t allergens (e.g. cigarette smoke, bed mites, rug fiber, etc.).

Dogs with a sneeze induced by allergens won’t show any other symptoms besides the typical allergy symptoms. They’ll still remain active, while eating and drinking like normal dogs.

Fortunately, dogs don’t have a sickness comparable to the common cold, which affects their nasal passageway. The canine’s common respiratory infection is called the Kennel Cough Syndrome, where there is irritation in their throats, thus causing a cough and not a sneeze.   So when an infection actually is causing the sneezing in your dog, it’s usually a more serious matter.

On a side note, there are dog vaccines to prevent the Kennel Cough Syndrome. Consult with a vet about the vaccination.

Potential sneeze-inducing infections in older dogs or puppies include: bronchial infections, pneumonia, or gastrointestinal disease. A fungal infection in the nose is very possible and could cause consistent sneezing at any time of the year. If you feel an infection may be the case, consult with your veterinarian as soon as possible.

Although rare, it is possible for your dog to get an infection from constant chewing on something or just biting something hard at the wrong angle. When your dog has a tooth or the root of a tooth protruding into the nasal passage, it could certainly cause some serious sneezing.

There may even be blood or pus present in the nasal discharge. Get your dog some medication attention if this is the case.

Don’t let the jargon medical name fool you, it’s not as bad as it may sound. Ciliary Dyskinesis is a condition where there is reflex movement of the cilia hairs in the respiratory system. The reason for this reflex, displayed as sneezing, is to attempt to remove any foreign irritants before it gets to the lungs.

This is not usually a serious involuntary reflex, as the dog’s body is just trying to protect itself. However, if your dog has chronic sneezing, then this may not be the case unless there is a constant irritant in air surrounding their environment.

Dogs don’t typically develop tumors until at least the age of 8 or older, but they happen. Although very rare, intranasal tumors can develop in your dog, leading to alarming symptoms such as a bloody discharge when sneezing. In the beginning, the bloody sneezing may start off slow, but start to develop into more frequent actions over the next few weeks.

The best way to ensure your dog’s survival is to bring them in to get checked up in the very early stages. Blood in a nasal discharge should always be a red flag and require immediate medical attention for your dog.

However, in later stages, chemotherapy and surgery are options for the removal of the tumor. Surgical removal of a tumor in the nasal area is a very difficult task for a veterinarian.

Treatments for a sneezing dog is a little complicated as it depends on the cause of the sneezing. Most cases for sneezing is through seasonal allergens, which doesn’t require any treatment but only time. The seasons will eventually change and the season-specific allergens will disappear.

If the sneezing-induced allergens are causing too much discomfort to your dog, it is possible for anti-histamine (benadryl, zyrtec, etc.) to be effective. Always consult with your veterinarian on which anti-histamine is right for your dog.

For situations where certain non-allergen irritants are causing the sneezing in your dog, environmental change may be necessary. It can be cleaning up the house, vacuuming the rugs and carpet or installing a new air filter system. Whatever it is, something needs to be done to clear the irritants in the air. After the irritants are gone, the mucus in the nasal passage will clear up and the sneezing reflex will subside.

Sneezing caused by inflections will have a variety of treatments depending on the specific infection and its severity. We cannot recommend a specific treatment for your dog through this article. It’s important to become familiar with the possible infections that lead to sneezing so you can discuss about the possibility with your veterinarian.

In the rare case of a tumor, a veterinarian will need to be contacted immediately to talk about the different treatments (such as surgery or chemotherapy,) so that you may be able to make an informed decision.