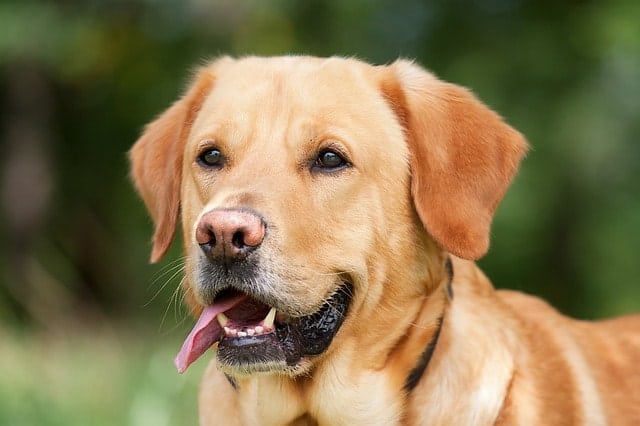 Labradors are friendly, social and energetic dogs. They have all the ideal qualities of a good family dog. So it’s no surprise they’re the most popular dog breed in America (for several decades straight!). But are they popular because they’re smart?

So, are Labrador Retrievers smart? The Labrador Retriever is one of the most intelligent dogs. As such, they’re ranked the 7th smartest dog breed when it comes to obedience and working intelligence (out of 138 breeds). But what makes them really smart is their superior retrieving instincts and ability to adapt to environments and situations.

Not only are Labradors super-obedient dogs, but they’re highly intelligent in other aspects of canine intelligence. Let’s examine what actually makes Labradors some of the smartest dog breeds in the world.

How We Measure a Labrador’s Intelligence

As we mentioned, the Labrador Retriever ranks in the top 10 for canine intelligence. But how did we come to this conclusion? Who did the study and how did they measure the intelligence of dogs?

The sole list of smartest dog breeds has been largely credited to canine psychologist and pHD, Stanley Coren. Though he led the study, he had help from 199 of the best obedience trial judges in North America.

Based on Coren’s dog intelligence criteria, the trial judges assessed and ranked as many dog breeds as they could. Here’s what he based his trials on:

Stanley Coren received a huge response from the obedience judges – much larger than he had expected. However, it’s important to know that not all dog breeds that were evaluated made his final intelligence list.

Only dog breeds that received at least 100 evaluations qualified for Coren’s final rankings. Because of the Labrador’s extreme popularity in North America, they easily qualified in this case.

Furthermore, only purebred dogs recognized by the American and/or the Canadian Kennel Club participated in the trials. This means that no mixed dog breeds were included in this intelligence trial.

The Labrador Retriever performed exceptionally well. So well, that they easily made the top 10 smartest dogs list as the 7th best-performing dog breed. Conveniently, the top 10 is also the smartest category of breeds.

Being in the top 10 meant that Labradors are able to learn a new command with fewer than 5 repetitions. It’s super quick and easy teaching your Lab new commands and tricks!

On the other hand, Labradors are also some of the most obedient dogs in the world. They will obey a known command on the first attempt with a 95% or better success rate!

We can’t say we’re surprised Labradors are in the same company as some of the brightest (and most popular) dog breeds. Other top 10 breeds also include the Border Collie, Poodle, Dobermann, Rottweiler, Golden Retriever, German Shepherd and more.

Labs vs. The “Average” Dog

Yes, Labs are highly intelligent and obedient. But how do these smart canines compare to your everyday, “average” dog breed? Let’s find out…

The average intelligent dog breed is capable of learning a new command with just 25 to 40 repetitions. In other words, a Labrador Retriever is at least 5 times faster at learning new commands.

In addition, average dogs will obey a known command (on the first attempt) with a 50% or better success rate. Not bad, but not nearly as obedient as the Labrador Retriever!

There’s nothing wrong with average intelligent dogs. They’re some of the most popular and adored dog breeds in the world. They include the Australian Shepherd, Husky, Great Dane, Boston Terrier, Dachshund and the Boxer (and many more!).

Is Your Labrador Smart?

Sometimes, the best way to gauge a dog breed’s true intelligence if by asking real owners. So, we surveyed the popular Labrador Subreddit and other dog forums to ask owners this question. Here’s what they had to say:

1. Shipch88 says Yes: “My lab is incredibly smart. He even knows us by our real names or nicknames. I’ll tell him ‘go to grandma’ and he’ll run to my mom every time.“

2. Klinquist says Yes: “When Targa (our Labrador) wants attention, he’ll grab something that we seem to like. There’s no doubt labs are smart.”

3. Decayurvin says Yes: “Never underestimate the intelligence of a Lab. They’re take advantage of you if you lower your guard. But they’re friendly nonetheless.”

5. Ultimatepwerteam says Yes: “Labs are just goofy dogs. They do some questionable things, but in actuality they’re ultra smart dogs.”

6. Laurenkay16 says Yes: “My new Lab puppy, Chief, is the smartest dog i’ve ever owned! I’m super ecstatic to watch him grow up!“

7. Terrencedaman9 says Mixed: “Brutus, my new Lab is smart, but just sometimes. He really does some questionable things, but I think he should be above average…“

8. Xtionna1 says Yes: “Our Labrador named Cricket is the smartest and sweetest dog my husband has ever owned. We brought her home not knowing she would be our soul mates. We all adore her so much.”

9. Guvner76 says Yes: “We lost our Labrador, Hunter, 5 years ago. Not only was he the smartest dog, but smartest animal i’ve ever met. So smart that he didn’t need commands anymore.“

10. LazyLarry0199 says Yes: “I’ve owned so many dog breeds in the world and my current lab is by far the most intelligent and obedient. I’ve had Goldens, a German Shepherd, Australian Shepherd and two Huskies.“

Other Reasons Why Labs Are Smart

There are many reasons why Labs are highly intelligent dogs. However, Coren’s rankings only measured obedience and working intelligence – just one dimension of true dog IQ. But because it’s the most objective way to measure dog intelligence, so it’s all we have.

Even so, Stanley Coren admits that there are two other components of canine intelligence called adaptive and instinctive intelligence. Both of which, are even more important for measuring dog IQ.

Instinctive intelligence refers to the innate skill or ability that the dog was bred for. In the past, dog breeds were bred for certain jobs and roles. Dogs were hunting companions, bird trackers, herding dogs, guardians and so much more.

For example, Poodles were bred to be water retrievers. Their innate instincts to swim and retrieve objects and game from the water requires this special type of intelligence. Or take the Border Collie for example: they know how to push and drive livestock with little to no human training.

Similarly, Labradors were also bred to be water retrievers. In fact, they were originally used for fishing by local fishermen. Few dogs were as obedient, skillful in the water and agile as the Labrador. As a result, they were some of the world’s best “fish retrievers.”

Just check out one of their amazing fish-catching instincts in action:

Labs are the ultimate water dogs and their physical qualities made sure of that. Not only do they have water-resistant double coats (to provide insulation in the cold waters), but also short fur that keeps them buoyant in the water.

Believe it or not, these dogs also have webbed toes. This unusual quality allows them to swim quickly and efficiently when retrieving in water. For these reasons, Labs were used to recover escaped fish or pull nets to the boat.

On the other hand, adaptive intelligence refers to the ability for the Lab to learn for him or herself. Does your Lab excel at problem solving? Do they learn from past experiences and mistakes?

All of these are excellent questions when assessing a dog breed’s intelligence. And while this type of intelligence can vary by individual dogs, most owners describes Labs as having high adaptive intelligence.

For example, one Lab owner says:

It took our dog just 4 months to learn how to open his gate. He’s seen us unhitch the slide on the door so many times that he’s picked up on at! Now we have to block the gate with a chair.

The fact that this Lab was able to learn how the locking mechanism worked in such a short time requires high adaptive intelligence – no doubt!

Erik’s Labrador was very observant in the actions of the owner, as with most Labs. So, it’s no surprise he was able to pick this up so quickly. Another Labrador owner tells us:

The door knob for my office room is a little bit broken. You just need to push it a little and it opens. The moment my Lab figured this out, he’s been coming in non-stop to check up on me. He doesn’t do this with any other doors.

These are all great examples of high adaptive intelligence in Labrador Retrievers. Though these are just two examples, you can certainly find dozens of these type of stories easily.

Just ask any Lab owner and you’ll be hearing anecdotes just like these! That being said, these dogs excel with obedience/working, instinctive and adaptive intelligence.

Not everyone prefers a smart dog. In fact, owning a highly intelligent dog breed (such as the Labrador) comes with extra responsibilities. That’s why many owners prefer “dumber” dog breeds.

Labradors are smart, so they require a lot of mental stimulation. This can come in the form of daily obedience training or dog puzzles. Without enough mental activities, Labs can exhibit destructive behavior.

Not all owners have the time or commitment to spend at least an hour a day with obedience training. Fortunately, there are other ways to provide great mental stimulation for Labs.

My favorite way is to give them plenty of smart toys and dog puzzles. These toys may be cheap, but provide the essential stimulation and also keeps them busy when you’re busy.

Here’s a few of my dogs’ favorites. I highly recommend the Nina Ottosson Dog Puzzle. It comes with three variations, but I went with the Hide n’ Slide because it looks to be the most interactive.

Hide your Labs favorite treats and they’ll go to work on this puzzle. It can take them some time in the beginning, but they’ll get better at it. I recommend checking it out at here.

Another one of my dogs’ favorite smart toys is the StarMark Bob-A-Lot Feeder. It’s just a bobble feeder that requires your dog to tilt it in a direction to release treats. But it works well with a smart dog!

The feeder comes with two chambers, so you’re able to put both treats and meals in there. It’s also a great toy if your dog eats too fast. This will slow them down during meals.

If you’re interested in this, I highly recommend getting it at here (on Amazon).

These are just the toys and puzzles that I’ve personally used and can recommend with full confidence. You don’t need to choose one of these, but it’s important that you get your Labrador something.

Are Labradors for Me?

When selecting the dog breed of your dreams, it’s important to pick a breed based on their temperament, personality and lifestyle fit. Many new owners make the mistake of picking a breed because “they’re smart.”

All dog breeds, including the Labrador Retriever, are intelligent enough for you. Unless you need a dog for a specific job (like herding), then it doesn’t really matter.

In my opinion, the fitment of the dog breed with you, your lifestyle and family makes the a lot of sense. Fortunately, the Labrador Retriever is one of the most adaptable dogs. They can seamlessly fit in nearly situation.

After all, they’re the most popular dogs in America for a reason. So if you’re looking for a wonderful dog breed that’s affectionate, friendly, entertaining and active – you really can’t go wrong with a Labrador Retriever.

Give these amazing dogs a try and you won’t regret it!