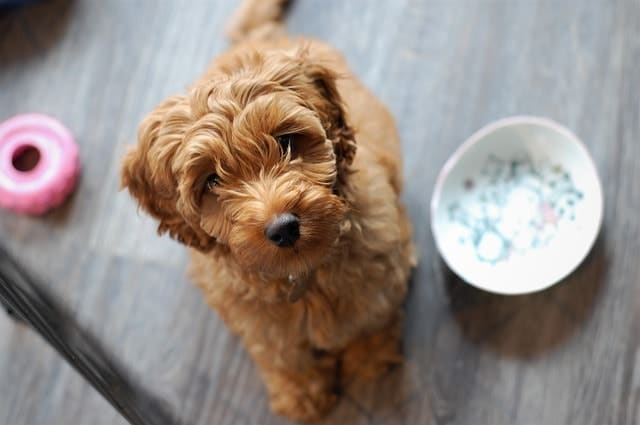 The Labradoodle is the cross of the lively Labrador Retriever and the graceful Poodle. As you would expect, these mutts are friendly, affectionate and playful. It’s no surprise Labradoodles are some of the most popular hybrids in America too.

But, are Labradoodles smart? Labradoodles are very intelligent hybrid dogs thanks to their parents, the Labrador and Poodle. Both parent breeds scored in the top 10 for obedience & work intelligence, according to Stanley Coren. And given the both parents’ long history of retrieving, Labradoodles will have high instinctive intelligence.

Though research on the intelligence of dog mixes have not been conducted, we may be able to deduce the Labradoodle’s intelligence based on the parent breeds. That said, let’s examine why this mutt is one of the most intelligent ever!

The current study and research on dog intelligence has been primarily done by pHD and canine psychologist, Stanley Coren. During his trials, he was able to evaluate and rank at least 138 dog breeds from North America.

Unfortunately, the Labradoodle did not make the list as they never participated in Coren’s intelligence trials. However, both parent breeds (the Labrador Retriever and Poodle) did.

Coren had the help of 199 obedience trial judges from North America. Based on Coren’s dog intelligence criteria, they helped him evaluate and rank individual dog breeds. His criteria was the following:

As previously mentioned, not all dog breeds made Coren’s smartest dogs list. Only breeds that received at least 100 evaluations qualified to be on the final smartest list. In addition, only purebreds participated in the trials.

Though Labradoodles aren’t purebred dogs, thus never participated, we can make an educated guess on their intelligence based on the performance of the Labrador Retriever and Poodle.

How the Labrador & Poodle Performed

Both the Labrador and the Poodle performed exceptionally well in the dog intelligence trials. As a matter of fact, they’re both ranked as the top 10 smartest dog breeds! Both did so well that they’re literally in an intelligence class of their own.

The Poodle ranked number 2 among 138 breeds. Just as impressive, the Labrador Retriever was the 7th smartest dog breed.

This meant both the Labrador and Poodle are capable of learning a new command with less than 5 repetitions! In other words, you may be able to teach these dogs a new command or trick in less than 30 minutes.

It also means that these dogs are able to obey a known command on the first attempt with an astounding 95% or better success rate. Not only are they the quickest learners, but also some of the most obedient dogs in the canine kingdom.

The ultra-exclusive top 10 category also happens to include the most popular family dogs. Just for reference, other dog breeds include the Rottweiler, Golden Retriever, German Shepherd, Doberman Pinscher and Border Collie.

With the results of both parent breeds, we can assume that Labradoodles aren’t far off. And if we consider the Labradoodle to be a top 10 caliber dog breed, how would they compare to your “average” intelligent dog?

Average intelligent dogs are able to learn a new command with 25 to 40 repetitions. This means that the Labrador Retrievers, Poodle (and most likely Labradoodles) are at least 5 times faster than the average dog.

Furthermore, average intelligent dogs tend to obey a known command on the first try with a 50% or better success rate. That is, Labradors and Poodles are much more obedient too!

Despite this seemingly wide gap, some of the most popular dog breeds in the world are in this average intelligence category. For example: the Australian Shepherd, Husky, Dachshund, Great Dane, Shiba Inu and the Boston Terrier.

Is Your Labradoodle Smart?

We surveyed the popular Labradoodle Subreddit (and other popular dog forums) to asked real owners this question. Here’s what they had to say about their dogs:

1. Sefm2429 says Yes: “I have an Australian Labradoodle. They’re hypoallergenic, have great temperaments, very smart, was easy to train, loves people and children and does very with with other dogs.“

2. Maindogdadd says Yes: “Our Labradoodle loves people and other dogs. Not only is he great with kids, but he’s a little goofy but very smart.“

3. Justanotherdoodle says Yes: “I have both a Labradoodle and a Poodle. Both super smart dogs with a great temperament around children. I think my lab poodle mix is a bit more obedient though.“

5. Eatthebankers says Yes: “He’s 8 now, but he is so smart, and always surprises us. We learned last week that he looks at the clock and knows the time. Have fun, and never underestimate their intelligence.“

6. Anonymousdoodle says Yes: “I can’t believe how smart our labradoodle is. She surpasses our expectations every day and we learn a lot from HER.”

7. Eerx3 says Yes: “My Labradoodle is honestly one of the best things to ever come in to my life. Puppies of any breed can be hard but from my experience labradoodles can be trained pretty easily. They’re very smart and eager to please!“

8. Dcdogmom says Yes: “Labradoodles are very curious dogs though, and very smart too. If not trained properly, they can become a problem.”

9. Kahlualualua says Yes: “Max, our Labradoodle, is smart and absolutely trainable. But he’s got some behavioral issues which I blame on the previous owner.“

10. Ezeki3lzak says Yes: “Out of the 7 dogs that i’ve owned in my life, the labradoodle is hands down the smartest AND most obedient. I’ve had Goldens, a German Shepherd, Rottweiler and a Great Dane.”

Other Reasons the Labradoodle is Smart

According to Stanley Coren, there are actually three dimensions of dog intelligence. The first being obedience and working intelligence, was the component used to rank the smartest dog breeds list. It’s the most objective, thus easiest to rank dog breeds.

However, there’s so much more to canine intelligence than just obedience and work. Namely, adaptive and instinctive intelligence. Both of which, are crucial components to measuring how smart a dog really is. And in our opinion, may be more important.

Instinctive intelligence refers to the innate ability and/or skill that a dog breed was bred for. What exactly was the purpose of breeding this dog? Some dogs were bred to be guard dogs, retrievers, herders, companions and more.

For example, Labrador Retrievers were bred to retrieve game – hence, the name. This means that they’re naturally inclined to retrieve an object. Haven’t you ever wondered why they do so well playing catch or frisbee?

Likewise, Poodles were also bred to retrieve waterfowl. In fact, both parents are some of the best retrievers in the game, at least according to Ducks Unlimited. This ability to retrieve with little to no human training requires high instinctive intelligence.

So what were Labradoodles bred for? In 1989, the Labradoodle was developed in Australia to be a guide dog for a blind woman with a husband that had allergies. As such, these dogs had to be hypoallergenic dogs, but also companionable and trainable.

Though being a guide dog does require additional human training, Labradoodles are born with the innate instincts to help and guide their owners. They’re incredible at reading emotions and could double as a premier companion dog.

Another important dimension of dog intelligence is adaptive intelligence. This refers to the ability of your Labradoodle to learn for him or herself. Though some dogs rely a lot on the guidance of their owners, adaptively intelligent dogs rely less.

When gauging this aspect of dog IQ, ask yourself these questions. Does the Labradoodle learn from previous mistakes and correct them? Are they good at solving problems on their own? All these questions pertain to adaptive intelligence in dogs.

For instance, one owner tells us:

My Labradoodle is scary smart. He’s figured out a way to tell when were about to take him for a walk. By the time were ready, he’ll be waiting at the door next to his leash.”

If this is not a sign of high adaptive intelligence, I don’t know what is. His Labradoodle figured out the small actions of the owners leading up to taking the dog out for a walk.

Another doodle owner tells us, “my dog loves his Greenie and I give him one every night at 10 PM. If I ever forget, he’ll come into my office and let me know at around 10 PM. I didn’t know these dogs had such amazing biological clocks too.“

Of course, these are just some stories of high adaptive intelligence in Labradoodles. I’m certain if you ask a doodle owner yourself, you’ll hear lots of similar stories! Likewise, it’s not unusual to hear similar stories regarding the parent breeds too!

One of the downsides to owning a smart dog, such as a Labradoodle, is that they require a lot of mental stimulation. They tend to have higher mental capacity, thus requiring more “activity” when it comes to the brain.

The solution? Provide smart dog toys and puzzles to keep their minds busy. Here are just a couple that my dogs absolutely loved, especially when they were younger.

I think the Nina Ottosson Dog Puzzle is fantastic for any dog. It comes in three variations but I went with this one (the Hide N’ Slide):

Put your doodle’s favorite treats in the hidden slots and let them go to work! They’ll have to move the knobs and sliders to get to their treats. Trust me, it’ll keep them occupied for quite a bit. I highly recommend taking a look here at Amazon.

Another dog toy that my Corgi loves is the StarMark Bob-A-Lot. It’s essentially a bobbing toy that dispenses treats as your dog tilts it a certain way. It’s especially useful if your doodle likes to eat. You’ll want to make them work their brains for the goodies!

There are two chambers with this dispenser. Not only can you fit treats in there but also meals (kibbles). And if your doodle eats a little too fast, then this can also help with slowing them down a bit.

Just make sure you get a size Large for your Labradoodle. If you’re interested in this, check it out at Amazon. But don’t just take our word for it. There’s a reason why it’s so highly reviewed!

There are simply a ton of great smart dog toys and puzzles for your Labradoodle. You don’t need to settle for these two. There are so many great ones you can find with a few minutes on Amazon. Have a look around and pick for yourself.

What’s more important is that you provide some toys that can mentally stimulate your dog’s mind. Without mental stimulation, it could lead to some destructive behavior such as chewing up the couch or your favorite pair of shoes.