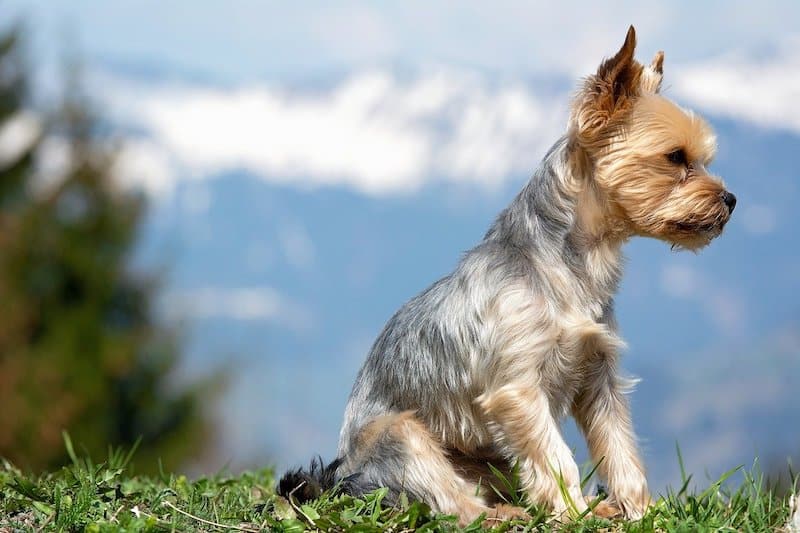 Yorkies are some of the most popular lap dogs in the world today. Always full of energy yet loving and spirited, Yorkies have a personality that few people can resist. But have you ever wondered what these little friendly dogs were actually bred for?

So, what were Yorkies bred for? Yorkies were originally bred for the role of catching rats in the mills and mines of northern England. Eventually, these skills led them into hunting game, where Yorkies would borrow underground to chase down foxes and badgers. From there, they evolved into the loving companions we know today.

The history of the Yorkie is an interesting one. It’s astonishing just how much the roles of these dogs have changed throughout the years. Read on to find out more about the Yorkie’s past.

RECOMMENDED: What Were Chihuahuas Bred For?

What Yorkies Were Bred To Do

Yorkies are very small dogs. In fact, they grow no more than 9 inches tall and weigh between 5 and 7 pounds! You must be wondering how such tiny dogs can possibly have any “job” in society.

Well, there’s more to the Yorkie than meets the eye. In the past, these toy dogs were feisty, confident and brave. Plus, they had no idea how small they were. That being said, let’s examine all the roles and jobs of Yorkies.

The original purpose of the Yorkshire Terrier was for ratting. These dogs were unleashed into primarily coal mines and mills, where they would skillfully track and hunt down these annoying pests.

In the mid 1800’s, rat infestation was a big problem. Not only did rats carry deadly diseases but also destroyed crops and generally made life difficult for businesses all throughout England.

This was when the Yorkshire Terrier was born. They were developed for the specific purpose of dealing with rats. And surprisingly, they were some of the best at their jobs.

Keep in mind, the Yorkshire Terrier wasn’t always this small. Rather, they were much bigger when they were used as ratting dogs. It’s similar to how the Pomeranians were once big enough to actually pull sleds.

Yorkies were so good at ratting that even the working class brought them home to deal with their own rat problem. And in more rural areas, a “community ratter” was used for the entire village.

Because Yorkies were so successful at ratting, they had developed instincts and skills that would let them seamlessly transition into hunting larger game.

If you didn’t know, you probably would have never guessed Yorkies were originally hunting dogs. Given the size of a rat, it’s believable that they once hunted the vermin. However, did you know Yorkies hunted small game as well?

It’s true. Yorkies had all the components to take down badgers and foxes. They had a certain fierceness to them and sky-high confidence in their abilities. And despite their small stature, they were courageous dogs.

They simply loved the thrill of hunting, and would never back down no matter how much bigger the prey was.

How Yorkies hunted small game was relatively simple. After having tracked down the prey, the Yorkie chases the animal (likely into the prey’s burrow). The hunters would dig open the burrow entrance as much as they could.

Because these dogs were small, the hunters would release the dog into the underground burrow to flush out the game. As soon as they pop out, the hunters grab the animal.

This type of hunting is rare these days and it’s likely you’ll never get to see your Yorkie hunt like this. However, if you’re curious, here’s a video of a badger being flushed out of a burrow by a dog.

Unfortunately, even the small Yorkshire Terriers were subject to the cruel blood sport, that is, rat-baiting. Similar to how Pit Bulls and Bulldogs were forced into bull-baiting, Yorkies also participated in the killing of rats for sport.

This blood sport involves placing Yorkies in an enclosed sunken pit – surrounded by rats. Spectators gathered around the pit and placed their bets. They would typically bet on how long a Yorkie would take to kill all the rats of the pit.

It’s not a pleasant sight. Yorkies would chase down the rats, pin them down and ruthlessly shake them to death while in their mouths. More often than not, two dogs would compete and spectators pick their dogs.

This senseless violent sport was not exclusively for Yorkies. In fact, many dog breeds (mostly terriers) participated in both rat-baiting and bull-baiting. Some notable participants include the Rat Terrier, Bedlington Terrier, Bull Terrier, Fox Terrier and many more.

With the Cruelty to Animals Act of 1835, the UK Parliament had essentially banned the baiting of large animals, including bulls and bears. But despite the act’s purpose of protecting “animals,” the law was not enforced for rats.

After the act, rat-baiting had exploded in the popularity within the country. So much, that it’s estimated London had at least 70 rat pits going on at one time.

And while rat-baiting has since been long banned in major countries all over the world (including England), it is still legal in some countries.

History of the Yorkshire Terrier

The Yorkies were not always like the ones you see today. It wasn’t until several iterations of breeding that we developed this cute little toy dog. As such, there’s a lot of history behind these dogs.

Due to the industrial revolution & boom of the mid 19th century, mills began popping up in Yorkshire, England. As a result, a flood of workers from Scotland migrated to northern England in search of new opportunity.

A good amount of Scottish immigrants had brought their dog companions with them, consisting of mostly small terriers. They had with them the Paisley Terrier, Skye Terrier, Waterside Terrier and others.

No one can’t make up their mind about which dog breed the Yorkie was primarily developed with. Many suspect the primarily dog breed was the Waterside Terrier (now called the Airedale Terrier).

We don’t know for sure which terriers actually contributed to the development of the Yorkshire Terrier. However, plenty or people believe that it was a combination of these various terriers brought from Scotland.

It wasn’t until 1861 that the Yorkshire Terrier made it’s debut to the world at a bench show. When they were first introduced, they were called the “Broken-haired Scotch Terrier” due to their Scottish origins and silky textured coat.

For nearly a decade they were called that name. Others also called them the “Rough Coated Toy Terrier” or the “Broken Haired Toy Terrier.”

Around 1870, a reporter commented saying that they should be called the “Yorkshire Terrier” because the terrier had changed much since first debuting. And from then on, the name stuck and they were thus called the “Yorkie” for short.

Back then, there was a lot of confusion about the breed. There simply was no strict standard for the Yorkies yet. In fact, any dog breed that resembled the appearance of the Yorkshire was considered one.

If the dog was in the shape of a terrier with a long coat, the proper colors, docked tail and ears, then they were automatically labeled as Yorkshire Terriers. It’s very similar to how pitbull-looking dogs in shelters are falsely labeled as pits despite no genetic connection.

The “Father of the Yorkie”

It wasn’t until the late 1860s that the standard for the Yorkshire Terrier took a huge leap forward. A show dog named Huddersfield Ben became extremely popular touring shows throughout Great Britain.

Huddersfield was a superstar dog during his time. Not only did he win multiple show awards everywhere he went, but also won several rat-baiting events too. He did it all and captured the hearts of Great Britain’s dog enthusiasts.

Huddersfield Ben was the best stud dog of his breed during his lifetime, and one of the most remarkable dogs of any pet breed that ever lived.

For this reason, Huddersfield Ben is still called the “father of the Yorkshire Terrier.” Without him, we could be talking about a very different Yorkie today.

The Yorkshire Terrier eventually made it’s way to North America, where it exploded in popularity. Since 2013, the Yorkie has been on the American Kennel Club’s top 10 most popular dog breeds list.

This makes them the single most popular toy dog breed in America. In the small dogs category, only the French Bulldog is more popular (and not by much). But how exactly did the Yorkshire Terrier make it’s way to America?

Unlike other European breeds, the Yorkie was introduced to North America shortly after the standard was developed (in 1872). However, it wasn’t until 1885 that the first Yorkie was officially registered with the AKC.

The Yorkshire Terrier had its ups and downs in America. By the 1940s, the popularity of Yorkies had slumped to it’s all-time lows. With the growing popularity of big dog breeds, the slump was expected.

During World War II, a Yorkie named Smoky served as a war dog and became an instant hit around the USA. Despite being just 4 pounds and 7 inches tall, he was “serving” the country in war.

An American soldier, named Bill Wynne, found Smoky in an abandoned foxhole somewhere in the New Guinea jungles. For the following years in war, the dog followed him everywhere in his backpack.

He was so popular at the time, it’s believed he was the sole reason for the resurgence of the Yorkshire Terrier. There’s even a memoir about Smoky and Wynne, called Yorkie Doodle Dandy.

What Yorkies Are Bred For Today

The Yorkshire Terrier has come a long way since the mid 19th century. Not only do they physically look different (much smaller), but their temperaments aren’t exactly the same either. They’re the same, but different.

It’s safe to say that hunting, ratting and rat-baiting are all roles of the past for the Yorkshire Terrier. Instead, they’re bred solely as companions and lap dogs today. They also make some of the best playmates for older children.

Still, these dogs have retained some characteristics and traits from their old days. Given the array of roles and jobs they had, it’s easy to see why they’re such energetic, feisty and confident dogs.

Teddy, our Yorkie, is a sweetheart. But I think he is very prey driven. He’ll always go for the final kill. Not even flies are safe around him.

Some Yorkies can show aggression towards smaller animals, such as guinea pigs, hamsters or small cats. But this is just all part of the strong prey-instincts they once had as a legitimate hunting dog.

It’s hard to stop this natural instinct of your dog. The most you can do is to try to socialize your Yorkie with these animals very early on. But, you’ll still need to be careful.

Overall, the Yorkshire Terrier has become a very easy companion to take care of. They don’t really shed and require minimal exercise. Yorkies are really the perfect dog for any family!