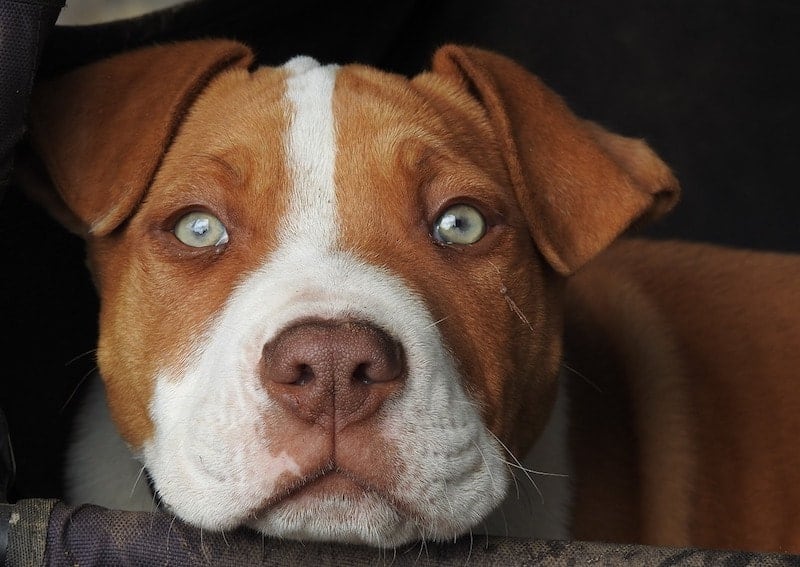 When someone thinks “pit bull,” they probably have a very specific image of a dog in mind. Most likely, a stocky dog with a muscular build, large skull, almond-shaped eyes and a somewhat wrinkly face.

But despite popular belief, the Pit Bull is not one specific dog breed. Rather, the term refers to a certain type of dog derived from 4 heritage breeds, such as the American Staffordshire Terrier or Staffordshire Bull Terrier.

And as a matter of fact, the Pit Bull isn’t even recognized by the American Kennel Club. That being said, what are the dog breeds that actually are considered Pitbulls?

Pit Bull dogs were originally developed from bulldogs around the 19th century. In fact, bulldogs were crossed with various terrier breeds to develop bulldog-type dogs with better agility and more gameness.

Similar to the term “hound” or “retriever,” pit bull refers to a type of dog breed. And within this category type, there are four distinct pedigree breeds:

If you didn’t already know, the name is an abbreviation for “pit bulldog,” which is what they were called in the 19th century. Back then, these dogs were much smaller with stocky bodies and smooth coats.

But what’s really confusing is that the term is now used to refer to any dog breed that looks like a pit bull. Even if a dog isn’t isn’t genetically connected to any of those four pedigree breeds, they can still be considered “pit bulls.”

So depending on how you view it or which source you’re asking, a pitbull can refer to anywhere between 4 and 30 plus dog breeds (not including mixes).

It’s just that there are officially four pitbull types by American standards.

According to a study published by the Journal of Applied Animal Welfare Science, animal shelter workers frequently mislabel dogs as “pit bulls.”

It seems harmless to be called something else. However, being misidentified as a pitbull dog can lead to a string of negative consequences, especially in an animal shelter.

For example, a loss of housing, being captured by animal control or even euthanasia (putting the dog to sleep) are all more likely for pitbulls.

Animal shelter staff and veterinarians are frequently expected to guess the breed of dogs based on appearance alone.

Being mislabeled as a pitbull significantly decreases the dog’s chance of adoption from shelters because they’re seen as “dangerous dogs.” In this case, a small mistake can greatly affect the rest of a dog’s life.

This University of Florida study looked into the breed assessments of 120 dogs. The staff members making these assessments included 16 professionals, including 4 veterinarians.

Plus, each member had at least 3 years of experience working in the animal shelter. In other words, they were considered “highly experienced” and not new to this type of work.

After taking blood samples, the researchers discovered dogs that actually had pit bull heritage were only accurately identified 33% to 75% of the time.

On the other hand, dogs that did not have pit bull heritage were misidentified as pit bull types 0% to 48% of the time. The percentage varied depending on the staff member making the assessment.

They may all look alike with similar physical characteristics, but each dog is unique in their own right. Let’s see why.

These dogs are energetic and active. With their muscular and stocky build, they’re more agile than you may think. But because they’re so lively, they can become a problem if not properly trained, socialized and exercised.

The origin story of these dogs can be traced back to the nineteenth century in England. Breeders experimented by crossing Bulldogs with terriers. Not only did they want the athleticism of the Bulldog but also the tenacity of the terriers.

Eventually the ancestors of the APBT was born and brought back to the United States, where they thrived as multi-purpose farm dogs.

They herd cattle, hunt game, pulled carriages and were the perfect companions for farmers.

They’re athletic and powerful dogs, but also have an affectionate side that few have the opportunity to see. Regardless of what the media makes them out to be, they’re almost always inherently loving and loyal dogs.

As enthusiastic as they are, the American Pit Bull Terriers (APBT) are eager to please their owners. And while they may have an affinity towards children, they can unintentionally hurt them with ease.

That being said, parent supervision is absolutely necessary for kids when playing with these dogs. No matter how well they’re trained, it’s better to be safe than sorry.

If you’re looking for a guard dog, the APBT is probably not the best choice. They’re actually too friendly to be adept guardians of the home.

But as long as you provide plenty of training, they make some of the best companions an owner can find.

American Staffordshire Terriers, otherwise known as AmStaffs, are pitbull-type dogs that look similar to the rest. Along with their wide heads, they have a muscular build, medium muzzle and ears set high on their heads.

Like the APBT, the AmStaffs also originated from Great Britain, where they unfortunately participated in illegal blood sports, such as bull-baiting.

Despite the similar origins, the American Kennel Club eventually recognized both the original and American variation. Both of these new dogs just became too popular and prevalent to ignore.

The American Staffordshire Terrier is much different from its historic days as bull-fighting dogs. Today, they make some of the best and most loyal companions you can find.

The American Staffordshire Terrier is a playful and loving dog. However, they need to be treated as a member of the family. Without a loving environment, they can develop some aggressive tendencies.

Plenty of exercise and mental stimulation is needed to keep these dogs in check. In fact, 60 to 90 minutes a day is recommended. Like other pit-types, the AmStaff will likely exhibit destructive behavior without it.

Though they would like nothing more than to be your friend and companion, they’re not meant for the lapdog lifestyle.

Rather, AmStaffs are quite adventurous and active dogs. They’ll love going for hikes or whatever outdoor activities you have planned.

When training these dogs, they do best with positive reinforcement because they can be sensitive at times. But when things get rough, their courageous side comes out.

Standing at just 15 inches tall, the Staffordshire Bull Terrier is much stockier and shorter than the other Pitbull-type dog breeds. Though smaller, they’re just as agile and strong as the others.

They’re known for their silky-smooth short coats and their rock-solid muscular build. They have short necks with a wide head and chiseled cheeks, much like the other dogs in this group.

The Staffie shares the same dark history as the other Pitbull breeds on this list. Back then, they were prized bull baiting dogs, but have now developed into affectionate and friendly companions.

These dogs were especially popular in the county of Staffordshire, hence the name. Eventually they made their way to America, where they were used to develop the larger American Staffordshire Terrier.

Thanks to responsible breeders, the Staffordshire Bull Terrier has come a long way since its days as fighters. They’re cheerful and playful dogs that surprisingly have a soft spot for children.

But with other dogs, they’ll need a lot of socialization early on. They can adjust just fine as adult dogs, but may require more time. As for training, Staffies are highly intelligent and won’t have a problem learning.

It’s worth noting that they can be stubborn at times. So if they start having one of their stubborn streaks, know that it will pass. You’ll just need to be a little patient with them.

They make much better watchdogs than guard dogs. They’ll alert you if anyone visitors are nearby, but it’s more likely they’ll lick them to death than chase them away.

Yes, it clearly says in the name that they’re “bulldogs.” However, most would consider the American Bully to be a pitbull-type breed as well.

Physically, they appear to be stockier and a bit wider than the other types of pitbulls. But don’t let that fool you. These dogs are sneaky athletic and some can even leap over 6 feet into the air!

In the past, American Bulldogs worked as multi-purpose farm dogs, so they needed the quickness to chase down stray cattle. As such, they require a lot of physical activity to maintain a healthy life.

Today, you’ll find all sorts of variations of American Bulldogs. In the 19th century, they were mainly white dogs. Since then, breeders have developed all sorts of coat colors, such as brindle, white, red, brown, tan, fawn and more.

As scary as they may look, American Bulldogs are not hostile dogs. In fact, they’re the opposite – friendly, loving and good-natured bully dogs.

But don’t mistaken their friendliness for weakness. They’re extremely confident dogs that’ll try to become pack leaders from the moment you bring them home. That being said, they’re not ideal for novice owners.

On the bright side, American Bulldogs are highly dependable dogs. It’s surprising how much they genuinely love the children of the family. But letting your kids play with these dogs still require supervision, as they can unintentionally hurt them.

Socialization is extremely important with the American Bully, especially socialization with other dogs. They tend to show aggressive behavior towards other dogs without it.

In short, the American Bully is a people-oriented dog breed. They need a loving and positive environment to truly be happy and thrive as a companion. In addition, they’ll need a lot of exercise each day.

When debating which dog breed is a pitbull, things can get a little confusing. According to the Huff Post, over a dozen dog breeds can fall into the “pitbull umbrella.”

These other dog breeds can range from the Cane Corso to the Dogo Argentino and Alapaha blue blood. And although they may look similar in appearance, they’re not pitbulls by technicality.

Unfortunately, just because a dog breed looks like they belong in this group makes them pitbulls, at least according to how the system is set up today.

So if you’re looking for a pit, I strongly urge you to adopt one from your local animal shelter. The fact is, there is an overpopulation problem when it comes to pit bulls in shelters.

The statistics say that over 1 million dogs are euthanized (put to sleep) each year. Out of the roughly million dogs, about 40% of them were classified as pit bulls.

But you may be wondering why there are so many pit bulls in animal shelters. According to the Bark Post, there are two main reasons.

The first is a “backyard breeding” problem. This refers to the “casual” breeders that don’t really know what they’re doing but decide to breed their pits with any other dog. They mainly do this for profit or other various reasons.

Another problem could be the Breed Specific Legislation, along with the “pit bull prejudice.” Those that don’t know much about these dogs think they’re dangerous because that’s how the media unfairly portrays them.

For this reason, it’s extremely difficult for them to find a new home – and animal shelters know this.

So if you’ve come here looking for a pitbull type dog breed as your next dog, please consider adopting one first. As long as you provide them with a happy and loving environment, they’ll be some of the best dogs you can find.