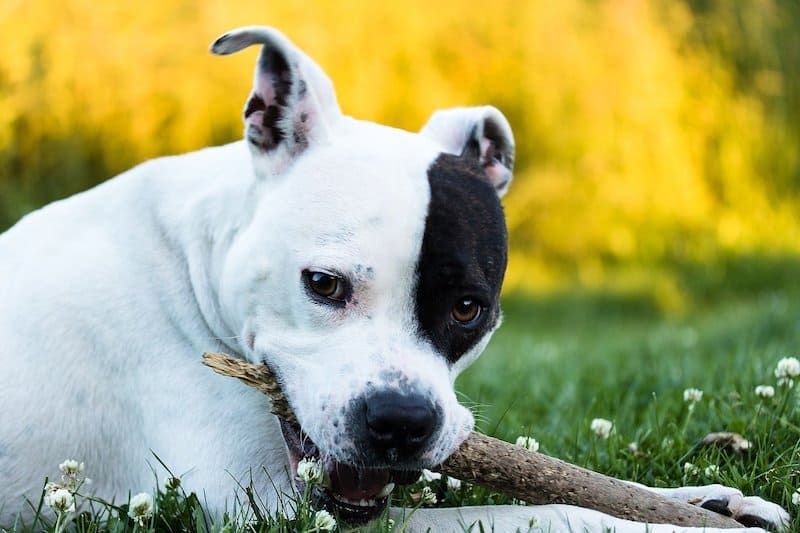 Pit Bulls are a collective of dog breeds that have come a long way since their early days. Once a fighter, they’re some of the most loving dog breeds today. But if you’re considering a Pit Bull, you may be wondering just how intelligent they are.

So, are Pit Bulls smart? Pit Bulls, namely the Staffordshire Bull Terrier and American Staffordshire Terrier, have average to above average intelligence. For obedience & working intelligence, they’re the 94th and 48th smartest breed, respectively. However, adaptive and instinctive intelligence are what really makes them smart dogs.

Despite their relatively low rankings on the dog intelligence list, Pit Bulls are much smarter than you think. Let’s examine what really makes these loving dogs so intelligent and why they rank low according to the “experts.”

Before we continue, we must first clarify what the “pit bull breed” is. As a matter of fact, the Pit Bull is not a single dog breed. Rather, they’re a collection of four breeds and direct relatives to those pedigree breeds.

And despite the massive confusion in the dog world, these four breeds are the only dog breeds in the pit bull category. Many dogs in animal shelters have been classified as Pit Bulls just because “they look like one.”

So, in this article we will be talking about just those four specific Pit Bull dog breeds. Two of which, are dogs actually recognized by the American Kennel Club.

Measuring the intelligence of a dog is a difficult task. There is no way to truly quantify intelligence in dogs. And although obedience & working intelligence may be the closest, it still have its flaws.

This dimension (obedience & working) of canine intelligence is largely credited to Stanley Coren, a renowned pHD and canine psychologist.

And with the help of 199 obedience trial judges from North America, Coren was able to infamously develop the dog intelligence ranking list.

Based on Stanley Coren’s trial criteria, each obedience judge tested as many dog breeds as possible. With that information, he formed his final rankings.

His criteria was based on the following:

Unfortunately, not all dog breeds took part in Coren’s trials – it’s why not all four Pit Bull breeds tested for intelligence. Only those recognized by the American or Canadian Kennel Club participated.

Because only the American Staffordshire Terrier and Staffordshire Bull Terrier are recognized breeds, they were the only Pit Bull breeds involved. Thus, we only have data on those two dogs for obedience and working intelligence.

How the Pit Bulls Performed

Overall, the two representatives of the Pit Bull dogs did fairly well. While the Staffordshire Bull Terrier ranked 94th out of 138 breeds, the American Staffordshire came in at 48th place.

This meant that the American Staffordshire Terrier is able to understand a new command with 15 to 25 repetitions. These Pit dogs will also obey a known command (on the first attempt) with a 70% or better success rate.

Performing slightly worse, the Staffordshire Bull Terrier is capable of learning a new command with 25 to 50 repetitions. Furthermore, they have a 50% or better success rate with obeying commands on the first try.

Overall, these Pit Bulls didn’t do too bad. There’s nothing wrong with being average, and in the American’s case, they did better than average.

Pit Bulls vs The Smartest Dogs

The most intelligent dog breeds in the world are in a class of their own. In fact, they’re the top 10 smartest breeds!

These dogs are capable of learning a new command with fewer than 5 repetitions. In addition, they’re likely to obey a known command on the first try with a 95% or higher success rate!

This means they’re at least 3 times faster at learning new commands than the Pit Bulls. Plus, they’re much more “obedient” too.

So who are these ultra-smart dogs? They include some of the most popular American breeds, such as the German Shepherd, Poodle, Golden Retriever, Labrador, Rottweiler and the Doberman.

Is Your Pit Bull Smart?

Like with humans, the true intelligence of your Pit Bull can vary from dog to dog. However, we believe the best way to gauge a breed’s intelligence is by asking the owners.

With that said, we surveyed the popular Pitbull Subreddit and other dog forums to ask real Pit Bull owners whether they believed their dog was intelligent. Here’s what these owners had to say to the question.

1. Throwawayhelp123456 says Yes: “We have had my pit bull for a week now, after she was in a shelter for 2 years. She is incredibly smart, and very much a confident and alpha dog.”

2. Turnipkid7 says Yes: “Chomper, our pit, is super smart. He’s a little stubborn at times but you know he’s intelligent from how he interacts with humans.”

3. Zoe says No: “Pit bulls are smart? You haven’t met my red nose pit bull, Tank (aka Big Dummy). We don’t call him ”dummy” for nothing!”

4. Cavscoutwife says Yes: “The Pit bulls intelligence level and ease of training is a huge bonus to many types of families. Above all else, those of us that love the breed, adore their huge smiling faces!”

5. Houstonsfinest says Yes: “Don’t underestimate the intelligence of the pitbull. We’ve raised many in our lives and we’re always so pleased with their capability and obedience.”

6. Toni H says Yes: “Pit bulls are extremely smart dogs and learn faster than lightning. Very good dogs to be around if you love them openly and often.”

7. Jon_jordan says No: “I hate to admit it, but they’re not the smartest dog around. They are, however, very loyal and very protective.”

8. Shermanf says Yes: “My red nose pit bull is sooo smart. They’re some of the smartest dogs i’ve ever seen…give them a chance!”

9. Williamssherwin says No: “My pit is a little goofy and silly most of the times, but in no world is he smart. But does it really matter? He’s the most loving dog I’ve ever owned.”

10. Surfserps says Yes: “After owning a German Shepherd, Doberman and American Pit Terrier, the Pit is the smartest. Not the most obedient, but feels like he just understood situations better.”

With all these Pitbull owners claiming their dogs to be highly intelligent, why do these dogs rank so low in Coren’s dog intelligence rankings?

It all comes down to the temperament of these dogs. Not all dog breeds will “work” for the sake of working, such as the Border Collie. Similarly, not all dogs will do your bidding “just because.”

According to Rover, Pit Bulls have a lot of energy and determination, which can come off as stubbornness and willfulness. Owners will tell you that these dogs can certainly go on their “stubborn streaks” from time to time.

I feel horrible but I’m at my wits end trying to find a way to get Buddha to behave himself. I know he knows his commands and can be a good dog (he shows me that on his “good” days). He’s just being super stubborn.

Because Coren’s dog intelligence trials were based on obedience & working intelligence, stubbornness could be the detrimental quality that led them to rank lower than they should.

Though we think how fast a dog learns is correlated with intelligence, Coren’s trial is essentially an obedience test. As such, the more stubborn dogs don’t usually do well with this type of test.

But just because your Pit Bull doesn’t obey you doesn’t mean your dog doesn’t understand what you’re asking. As Buddhasmommy described, her pit knows his command but doesn’t always follow. That is, the stubbornness of the Pit Bull.

Other Reasons Why Pit Bulls Are Smart

Obedience and working intelligence is a great starting point when measuring a dog’s IQ. However, it doesn’t tell the full story. Not even close.

And according to Stanley Coren, there are two other dimensions of dog intelligence: Instinctive and adaptive intelligence. These two areas are where Pit Bulls really shine in intelligence.

Instinctive intelligence refers to the ability or skill that the dog was bred for. For example, herding dogs were bred for, well, herding.

The natural ability to push livestock (cattle, sheep) toward directions and formations require a special type of smarts, that is, instinctive intelligence. Keep in mind, they’re able to do this with little to no human training.

And although these dogs were originally bred for bull-baiting, ratting and other “dark” jobs, they were reinvented and bred to be multi-purpose dogs.

Not only were they fantastic companions, but also capable guardians, vigilant watchdogs and tireless workers. They were some of the most versatile breeds back in the day (and probably still are!).

All these jobs and roles that Pit Bulls once had doesn’t mean they’re just versatile, but that they also have high instinctive intelligence.

Stanley Coren believes that the final dimension of dog intelligence is adaptive intelligence. Perhaps the most important, it refers to the ability of the dog to learn for itself.

Is your Pit Bull able to learn from previous experiences and past mistakes? Can the dog communicate with humans in a feasible way? These are all questions regarding adaptive intelligence in dogs.

Fortunately, most Pit Bulls are known to show high adaptive intelligence. For instance, one Pit owner tells us:

My Tanner and Zoe are too smart. I went inside to get my car keys and Tanner was laying on the floor eating his cookies. In the short amount of time I was outside, he figured out how to open the cabinet to get to his cookies.

Tanner the Pit was able to learn how to open cabinets, likely by observing his owners (learning from previous experiences). In addition, he knew the best time was when his owners were gone – a clear sign of adaptive intelligence.

Another Pit Bull owner tells us a similar story, saying:

I have a smart pit bull. I’ve been treating Quinton for a hotspot. And every time he sees my supplies, he’ll walk over and lay down on his own. It must not feel good when I clean it so it’s saying a lot.

Though these are just two examples, there are plenty more on the web. And, if you ask any Pit Bull owner, they’ll likely tell you similar stories.

What the Pit Bull lacks in obedience training (and not all of them), they more than make up for it with their natural ability to learn. Performing tricks and obeying commands is great, but adaptability is what makes Pit Bulls truly intelligent.

Is the Pit Bull For Me?

All four Pit Bull breeds are great dogs for everyone. And while obedience training can be a little difficult, it’s not always the case.

Yes, Pit Bulls are stubborn dogs. However, they’re both people-oriented and loyal dogs. As such, Pit Bulls will do their best to comply with training.

Don’t listen to the myth about Pits being “dangerous dogs.” They may have the most dog bite incidents, but it’s likely due to negligence and poor training from bad owners. After all, they were the “premiere” fighting dogs so it’s inevitable they’d sometimes attract a certain type of owner.

Overall, Pits are great dogs with high intelligence. Don’t let these “experts” tell you whether your dog is smart or not. And the truth is, all dogs are smart enough to give you what you need.

Bring home a Pit Bull today and you won’t regret it! They’re some of the most affectionate and kind dog breeds, despite what media portrays them to be.