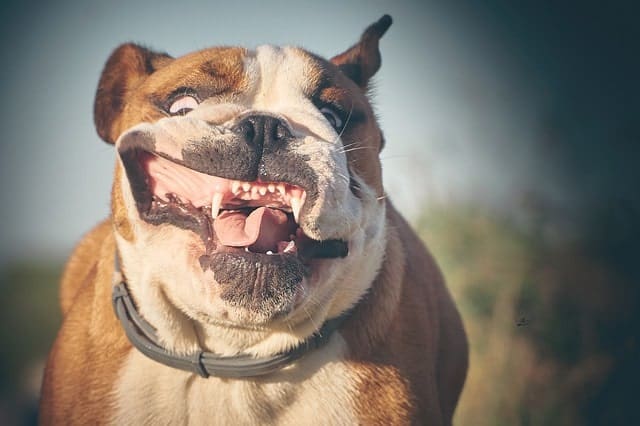 English Bulldogs are medium-sized friendly dogs with a calm demeanor yet a courageous personality. In my opinion, they’re unfairly labeled as aggressive and dumb dogs. But are they really more intelligent than we give them credit for?

So, are Bulldogs smart? English Bulldogs are dogs with “low intelligence.” They’re ranked the 136th smartest dog (out of 138) for obedience & working intelligence. But obedience isn’t everything, as they show high adaptive and instinctive intelligence. In reality, they’re unfairly labeled as “dumb dogs.”

There’s more to dog intelligence than just obedience training and work ethic. Bulldogs are a classic example of how intelligent dogs are misunderstood and branded as dumb. So, let’s explore what actually makes Bulldogs smart.

How We Measure a Bulldog’s Intelligence

Bulldogs are some of the least intelligent dog breeds according to the “experts.” Though we don’t necessarily agree with their research methods, it’s important to understand how they came to their conclusion.

The smartest dog breeds list had been developed and is largely credited to renowned pHD, canine psychologist and researcher, Stanley Coren.

And with the help of 199 obedience trial judges from North America, Coren published his infamous book and list of the most intelligent dogs. Here’s how he did it.

The obedience trial judges not only evaluated, but also ranked every dog breed based on Coren’s specific criteria. His criteria was as follows:

Among the participants, only dog breeds that received at least 100 evaluations qualified for Coren’s final list of smartest dogs. Due to the huge popularity of the English Bulldog, they easily qualified and made the final cut.

How the Bulldog Performed

As you may already know, the Bulldog performed extremely poor in Coren’s intelligence trials. In fact, only two dog breeds performed worse – the Afghan Hound and Basenji.

Consequently, Bulldogs were put in the lowest degree of intelligence group with 10 other dog breeds. For reference, the Mastiff, Beagle, Shih Tzu, Pekingese, Chow Chow and Bloodhound are also in this group.

Dog breeds in this intelligence group need at least 80 repetitions to learn a new unknown command. But on average, they’ll require between 80 and 100 repetitions.

Bulldogs aren’t the most obedient dogs either. They’re able to obey a known command on the first try with a 25% or lower success rate.

Bulldogs vs. The Smartest Dogs

Now that we know Bulldogs are some of the least intelligent, how do they compare to the smartest dogs in the world?

On the other side of the spectrum, you have not only the smartest, but also some of the most popular dog breeds in the world. These dogs are your German Shepherds, Golden Retrievers, Rottweilers, Labradors and Doberman Pinschers.

These dogs need fewer than 5 repetitions to learn a new command! That makes them at least 16 times faster at learning new commands than the Bulldog.

Arguably more impressive is their obedience. These dogs will obey a known command on the first attempt with a 95% or better success rate! They’re undeniably smart and highly obedient, at least by Coren’s standards.

Why Bulldogs Rank Low for Intelligence

First of all, the current smartest dog breeds list is based on flawed logic and tests. In reality, it’s extremely difficult to standardize a dog IQ test. Obedience and working intelligence is a great start, but doesn’t tell the full story of a dog’s IQ.

But because it’s the easiest type of canine intelligence to objectively measure, Stanley Coren went with that. In the end, Coren’s dog intelligence ranking is essentially based on an obedience test.

Still, why did Bulldogs perform so poorly during Coren’s trials?

Make no mistake, English Bulldogs are very stubborn dogs. I Heart Dogs ranked them the 2nd most stubborn dog breed of all time. Most Bully owners will tell you the same thing.

So wouldn’t it make sense that a stubborn dog performed poorly on an obedience test? In fact, other low-performing dog breeds are notoriously stubborn too. Just because a Bulldog doesn’t obey you doesn’t mean he didn’t understand you. Keep that in mind.

Bulldogs are the most stubborn dogs. I was actually worried my bully was deaf because he doesn’t even look at me while yelling his name. Open a wrapper across the house and he’ll come running.

Bulldogs know what you want and what you’re asking. It’s just that they won’t always do your bidding for the sake of it. Other Bulldog owners have suggested using treats. “With a treat, they’ll do anything,” according to one owner.

English Bulldogs are known for being strong-willed and independent-minded dogs. They aren’t a dog that’ll easily bend over backwards for the owner.

However, that doesn’t mean they aren’t affectionate and loving dogs. They just know what they want and are determined to stick with their plan no matter what you (the owner) may say.

If a Bulldog didn’t want to do obedience training in that very moment, you can expect them to show little interest despite the trial judges’ best efforts.

Plus, it’s unlikely the judges bribed these dogs with treats during Coren’s trials. With that said, it’s not at all surprising that a Bulldog would perform so poorly.

Reasons Why Bulldogs Are Smart

There are a number of reasons why English Bulldogs are smarter than most people give them credit for. Where they lack in obedience & working intelligence, they excel in other areas of intelligence.

According to Stanley Coren, there are three dimensions of canine intelligence. The other two are instinctive and adaptive intelligence. Both of which, are just as important (if not more).

Though these two other components of IQ are much more difficult to objectively measure, here’s why we think Bulldogs excel in these two areas of intelligence.

Instinctive intelligence is the dog’s innate ability or natural skill. It’s what the dog was developed to do. Nearly all dog breeds, including Bulldogs, were bred for a specific task, job or role.

For example, the Australian Shepherd was bred to herd livestock. The fact that they’re capable of rounding up livestock and guiding them with little to no human training is a type of intelligence. That is their instinctive intelligence.

Likewise, Bulldogs were bred for the bloodsport that is, bull-baiting. In the past, it was truly a terrible sport in which Bulldogs would taunt the bulls until they became too tired. In addition, spectators would bet on the bully that could last the longest in the pit.

Despite the dark history of the sport, Bulldogs were some of the best bull-baiting dogs in the world. No matter how sad and unfortunate, this is their instinctive intelligence.

On the other hand, adaptive intelligence refers to a dog’s ability to learn for itself. This can mean a dog that’s great at problem solving or capable of learning from previous mistakes and experiences.

Bulldogs are known to show high adaptive intelligence through their actions. Though there is no “scientific” method of measuring this, we have some great stories from real Bulldog owners that support our argument.

One Bulldog owner tells us a story:

So I put a piece of meat on a plate on the floor. Braddock (Bulldog) wanted it. I said, “We’re going out, but I don’t want you to touch that piece of meat, OK?” Braddock knew none of those words. Then we circled around the block and Braddock was sitting on the sofa and the meat was untouched.

Even though this Bulldog didn’t know any of the words his owner just said, he was still able to understand their intentions. This is a clear example of high adaptive intelligence!

Another owner tells us,

When my Bully is having one of those lazy days, he never wants to move. But as soon as I open the cabinet that holds his treats, he starts sprinting towards me.

Very quickly, his Bulldog associated the sound produced from opening the cabinet door with the fact that there’s treats coming. Learning from the past is a definite sign of high adaptive intelligence.

These are just a couple stories of high adaptability and intelligence with Bulldogs. If you ask any owner, I’m certain you’ll find a lot of great stories just like these!

Is Your Bulldog Smart?

In our opinion, the best way to gauge the Bulldog’s true intelligence is by asking the owners themselves. The people that spend the most time with these dogs will generally have the most insightful feedback.

With that said, we surveyed the popular Bulldog Subreddit and dog forums to ask real Bulldog owners this question. Here’s what they had to say about their Bulldogs.

1. P1ggy says Yes: “One misconception is that English Bulldogs rank near the bottom on the smarts chart. We found this to be completely untrue. In fact, we believe they are all just stubborn, and they are smart enough to choose what to be stubborn about.“

2. Bullys_man says Yes: “Thinking that Bulldogs are dumb dogs is a huge mistake. They are much starter than most dogs, they just choose to do what they want.“

3. Nastshabast says Yes: “My English Bulldog, Sumo, maybe doesn’t understand the words, but he gets the meaning. They’re quite smart dogs.“

4. Buddin3 says Yes: “Stubborn is an understatement. They are very smart and bullheaded, but one of the most loyal dogs and a lot of fun.“

5. Denzitymatter says Yes: “I’ve owned all kinds of dogs, even those that are allegedly the smartest. My Bulldog was the best at communicating and understood situations very well. Obedience is another thing.“

6. Chasmosaur says Yes: “Bulldogs definitely get a rep as being stupid dogs, but it’s just not true. As stubborn as a mule, sure, but not stupid.”

7. Twelvetwentyseven says No: “She isn’t the smartest dog, but she is so sweet. All she wants is pets and treats.“

8. Systemsrdown says Yes: “Bulldogs are great at understanding what you mean, but they are perceived as dumb because they don’t always do what you want. It’s unfair and wrong…Bulldogs are SMART!”

9. Chasmosaur says Yes: “Bulldogs are not stupid dogs. They are stubborn dogs. World of difference 🙂 And just a warning, the stubborn increases as they age.”

10. Ootagoo says Yes: “It really is amazing how smart Bulldogs can be. You just have to be patient and get them over the stubborn laziness.”

Is the Bulldog For Me?

Bulldogs are great family dogs. They’re loving, courageous and enjoy having fun with their favorite humans. They will have their moments and you’ll instantly fall in love in no time!

But are Bulldogs for you? It’s important that you don’t pick a dog breed based on how intelligent they are. Instead, pick one based on their temperament and personality, especially if you’re just looking for a family dog and/or companion.

All dog breeds, including Bulldogs, are smart enough for what most people need. Different dogs just have different motivators. While some Bulldog owners have great success with using food as a motivator, you still need to test it out with your dog.

If you can provide the basic necessities for a Bulldog, then you should absolutely bring one home! These lovable dogs are consistently in the top 5 most popular dogs list for a reason!

You’ll never have a dull moment with an English Bulldog!

Do you have a Bulldog? Tell us whether you think your dog is intelligent or not? Let us know in the comments section below!