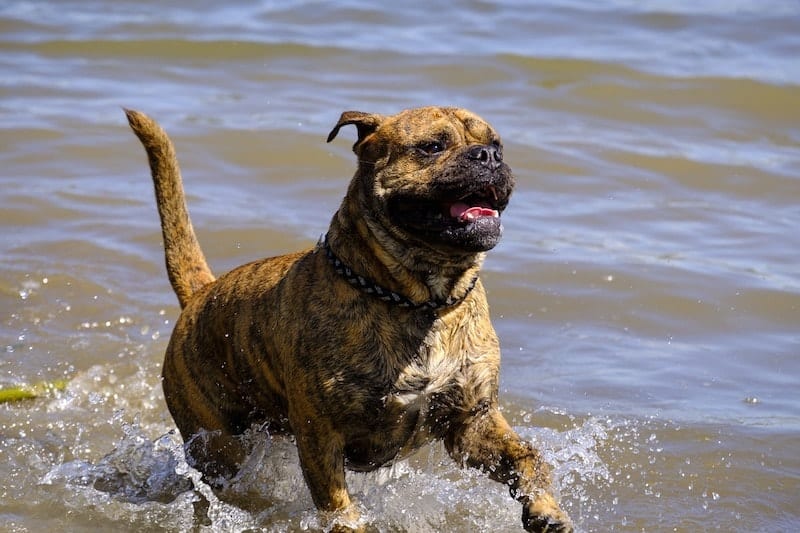 It’s a hot summer day, while you and your Bulldog are burning up. Seems like a great day for a swim with your Bulldog, right? Not so fast. There are things to know before you send your dog into the pool. So, can Bulldogs swim?

Most Bulldogs should not swim without a life jacket. Features of their facial structure, such as their short nasal passage, require Bulldogs to tilt their heads upward while in water. As a result, swimming is much more difficult for them.

The short nasal passage isn’t the only reason why Bulldogs aren’t adept swimmers. Let’s explore the physical qualities that make these dogs much more capable on land than in water.

Unlike the Spanish Water Dog or Poodle, Bulldogs weren’t bred to retrieve in water – let alone swim. Rather, they were bred for an illegal bloodsport, that is, bull-baiting.

However, there are plenty of non-water dog breeds that are highly capable of swimming. Why is it that Bulldogs are less capable of this physical activity?

This includes the French Bulldog, Pug, Olde English Bulldogge and pretty much any dog with a short snout, wide skull and “smushed” face. We call these type of breeds, brachycephalic dogs.

These breeds with brachycephaly have many ailments and potential health concerns because of their short nasal passages. For example, Dr. Rowena Packer (DVM) says that this facial structure restricts airflow and can make it difficult for them to breath.

With that said, the main reason why Bulldogs shouldn’t swim is because of Brachycephaly.

Having this physical trait means that Bulldogs will need to tilt their heads upwards in order to breath while swimming. As you can imagine, it’s certainly more difficult to stay afloat while doing this.

With a significant disadvantage in the water, Bulldogs can easily drown at any time. There’s just so many things that can go wrong so quickly.

If you’ve seen a Bulldog, you know they aren’t the most nimble of dog breeds. They’re characterized as stocky and muscular dogs with short legs – and that’s exactly what they are.

Aside from brachycephaly, Bulldogs just weren’t built to be good swimmers. According to Cuteness, they’re naturally muscular dogs.

And because muscle is much denser than fat, they’re more prone to sinking than floating. I don’t mean your Bulldog will immediately sink to the bottom of the pool. However, it’ll be much more difficult for them to stay afloat.

When our Bulldog was a puppy, we took him to a lake where he was swimming on his own. Then we went camping again. Now he was a big, beefy dog. Excited to see the lake, he ran down the pier and jumped. Sank like a rock to the bottom, but we had his leash.

Weighing nearly 50 pounds compacted into a 14-inch tall frame means that Bulldogs are compact with muscles.

Imagine this: you have a rock and a piece of wood that weighed the same. Throw them both into the water. Which is more likely to sink, and sink quicker. Most likely the compact rock.

I want to note that not all dogs with short legs are bad swimmers. In fact, some Corgis (famously known for their short stubby legs) are decent swimmers.

However, combined with all the physical difficulties that the Bulldog has and it makes it that much more difficult to swim.

According to I Heart Dogs, Bulldogs are actually a true dwarf breed, like with the Corgi or Dachshund. Though they’re relatively large dogs, they still have the characteristics of a dwarf dog.

A dwarf dog breed is characterized as a breed with abnormally short legs compared to the rest of the body (or to standard dogs). It’s a little bit harder to tell with a Bulldog, but if you meet one in person, you’ll notice it.

All dogs will naturally start “dog paddling” when put into water. It’s a swim style where dogs essentially “trot” in water by alternating their legs back and forth.

So as you can imagine, having a short legs make it a lot more difficult for dwarf dogs to swim.

Owners: Can Your Bulldog Swim?

Just because your dog is a Bulldog doesn’t automatically mean that he’s terrible at swimming. In fact, there are plenty of videos of skilled Bulldogs swimming on YouTube.

So, we thought it’d be great to survey real Bulldog owners to ask this question. Here are 10 owner responses from the popular Bulldogs Subreddit and other forums.

Here’s what the owners had to say:

1. Mellystart says: “My bulldog can swim without a life vest, but he can’t turn. We take him to the beach with a minimum of 3 people so we can catch him in the water and turn him back to shore.”

2. Hunterxzip says: “Wally, my bulldog, freaks out when he gets into the water…even on the shallow end. I can’t imagine letting him swim without a vest.”

3. Fanster6 says: “My bulldog loves the water and will swim any chance he gets. He’s not a good swimmer by any stretch, but he loved it. He’s just so graceful in the water.”

4. Rectizekiel says: “Bishop loves to swim, but only with a life jacket of course. Without it, he’d probably sink to the bottom in a heart beat.”

5. Sinapse187 says: “It’s incredible how everything thinks these dogs will sink like they’re rocks. My Bully is a great swimmer, but it really tires him out fast.”

6. Aviatorshades says: “We got a life jacket for our bulldog and he loves it! I think he’s actually too confident in the water now. He’ll stay in the water all day if we let him.”

7. Internetdogmom says: “Every time we let our Bulldog swim (supervised of course), he looks like he’s always having a difficult time. We don’t let him anymore.”

8. Grasshopper_jo says: “Our bulldog grew up and was disappointed he could no longer swim, though we did let him wade around near the shore.”

9. Foreverawino says: “I make sure Bowzer always has his harness on when we go to the river. I’ve literally had to keep him from drowning because no one told him he couldn’t swim.”

10. Llamalimadingdong says: “Our bully Harley loves the water, but she forgets that she can’t swim! We had to buy her a life jacket to wear when we’re around the water.”

Teach a Bulldog to Swim

Just because Bulldogs aren’t good swimmers doesn’t mean that they can’t swim. With the right preparations and equipment, all Bulldogs can enjoy this wonderful activity too!

Just remember that you should never force your Bulldog into the water. If they like it, great! If not, you can try again some other time. When it comes to swimming with your Bulldog, patience and consistency is key.

I strongly suggest you get your Bulldog a life jacket prior to swimming and training sessions. If you’ve read the article, you already know that the odds are genetically stacked against them.

Not only will a life jack give your Bulldog more confidence, but it’ll give you peace of mind knowing your Bulldog won’t sink. It’s helpful even if you plan to stay near the dog at all times.

With that said, the best life jacket that we currently use with our dogs is the Kygen Outward Hound Life Jacket.

It’s highly adjustable to fit your Bulldog and comes with “rescue handle” just in case something goes wrong in the pool. If your dog likes to wander far, the bright color options make them visible even when it gets dark.

For a Bulldog, you’ll most like want to get a size Large. However, make sure to check the size charts for better accuracy.

The first step is to introduce your Bulldog to water. It’s better to start early (puppy years), but it’s okay if you’re not.

Next, you’ll want to introduce your Bulldog to the body of water where he’ll actually swim. For example, if you have plans to swim at a lake, take your Bulldog for a walk to the lake.

Have the dog sniff the water and maybe even get his feet wet. Do this for a week or so prior to going to the lake. You just want to get the dog comfortable to the body of water at this point.

If you can get your Bulldog to stand in the shallow end of the lake by the end of the week, then that’s perfect. He may be ready to move on to the next step.

Finally, it’s time to swim! But only in the shallow area. Ideally, you’d want to venture out to where the Bulldog can still stand up if necessary. Yes, I know, they have short legs – so don’t venture out too far yet.

At this point, your Bulldog needs to have the life jacket on. What works well, especially if your Bulldog is food-driven, is to bribe the dog with treats.

Bring some of the dog’s favorite treats and always reward the Bulldog with treats and positive praises as he ventures out. Positive reinforcement is key for this step.

If your Bulldog has a favorite toy, such as a ball or frisbee, bring that to the swim session too! Try throwing the ball into the shallow end and see if your dog will retrieve it.

According to ClickerTraining, the best way to get your dog to swim is by going into the water with the dog. This will be necessary as you try to get your Bulldog into deeper waters.

Dogs look up to their owners and they’re real good at reading their emotions. By going into the water, you’re showing your Bulldog that it’s fun and great.

Not only will this instill a lot of confidence in the dog, but it just makes the swim session that much more enjoyable. Plus, you’ll be able to “save them” should anything happen.

A good approach is to slowly go into the deep end and bring their favorite treats. Give them the “come” command and constantly give positive praises.

More likely than not, your Bulldog will start heading towards you. Make sure to reward your Bulldog if he does come!

If you have friends with dogs that already know and love to swim, then it’s probably a good idea to bring them along.

Dogs will also learn from other dogs. If your Bulldog sees other dogs having fun in the water, the dog will be more likely to join the fun.

And according to PetMD, you’ll want to bring clean water in a water dispenser if you plan to swim in natural bodies of water.

Chances are, there are a ton of parasites and bacteria in the water that can cause some intestinal problems for your Bulldog. Don’t get them used to drinking the lake water!

And finally, don’t try to rush the process. All dogs adjust to being in water at different paces. This can be done over a course of a few days, or few weeks. It really depends on your dog.

You just need to feel your Bulldog out and see if the dog’s ready to move onto the next step. With enough patience, you’ll be swimming with your Bulldog in no time!