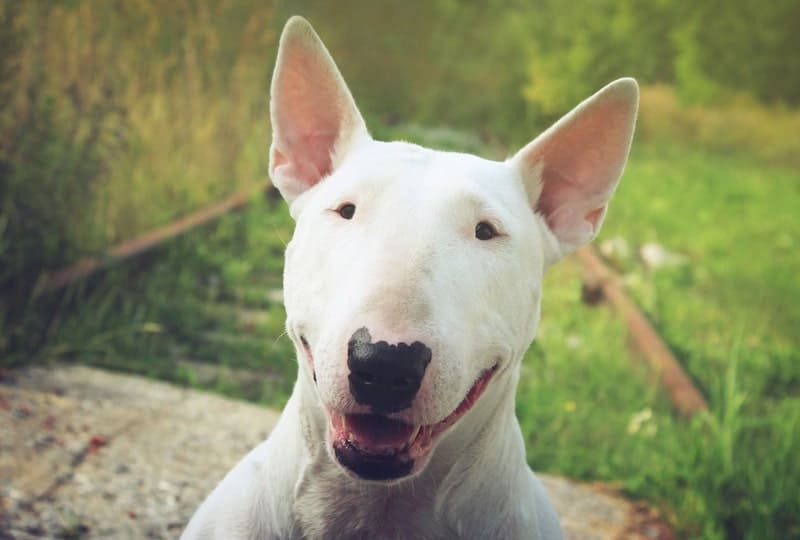 Bull Terriers are known for their clownish personalities and energetic vibe. There’s nothing these dogs love more than to play around and enjoy life. As such, there’s never a dull moment with a Bull Terrier. But, is there more to them than just fun and games?

There’s more to dog intelligence than just learning tricks and commands. After all, different dogs will have different motivators. A Bull Terrier is a prime example of this. Read on to learn how we measure dog intelligence and what makes these dogs smart.

The intelligence of the Bull Terrier is measured using obedience and working intelligence. This type of dog IQ was coined by canine psychologist and pHD, Stanley Coren. And while this is a great starting point, it doesn’t truly measure the full IQ of a dog.

Obedience and working intelligence refers to the dog’s ability to learn commands and obey. If the dog learns commands quicker while obeying more frequently, they’re considered more intelligent, at least according to Coren.

The criteria used in measuring obedience and working intelligence is largely credited to Coren. But even so, he had the help of 199 obedience trial judges in North America to help conduct his trials and research into this component of dog IQ.

With the data provided through the trials, Coren was able to finalize his list of smartest dog breeds. As such, the criteria is based on the following:

It’s worth noting that not all dog breeds participated in the trials. For example, only those that are recognized by the AKC or Canadian Kennel Club were even considered for the trials. This meant that rarer breeds and hybrids were out.

In addition, not all participants qualified for the final list of smartest dogs. Rather, only those with at least 100 responses qualified. Fortunately, the Bull Terrier is a recognized breed that’s popular in North America. As such, they had no problems qualifying.

How the Bull Terriers Performed

The Bull Terrier performed below average, coming in at 124th place out of 138 dog breeds. That is not to say they’re a dumb dog breed. Rather, they just have different motivation and may not respond well to obedience in the trials.

So what does below average mean? Bull Terriers are able to learn a new command with just 40 to 80 repetitions. That said, it may take a Bull Terrier the whole afternoon to learn a command, though it depends on the complexity of the command.

In addition, the Bull Terrier has a 30% or better success rate when it comes to obeying a known command on the first try. They aren’t the most obedient pets in the world. Sometimes, they just need a little clarification during obedience training.

But don’t be deterred. Some of the most popular dog breeds are also in the below average class. For instance, the Chihuahua, Maltese, French Bulldog, Saint Bernard, Pug and Chinese Crested are all in this dog intelligence class.

Compared to the smartest of the pack, the Bull Terrier isn’t very close. With that said, the top class of dog intelligence refers to the top 10. Out of all the breeds in the canine kingdom, these are the dogs that are most eager-to-learn and obey.

The most intelligent dogs are able to learn a command with fewer than 5 repetitions. They may be able to learn a basic command in just a few minutes! Plus, this means they’re at least 8 times quicker at learning commands than the Bull Terrier.

What’s more, the smartest dog breeds will obey a known command (on the first attempt) with a 95% or better success rate. They’re always eager to please their owners during obedience. In fact, dogs like the Border Collie will obey for the sake of working.

It’s not a coincidence that the smartest dogs are also the most popular. This may be because they’re the “easiest” to train. As such, the German Shepherd, Golden Retriever, Labrador, Doberman, Rottie and the Poodle all top this list.

Reasons Why Bull Terriers Are Smart

Obedience and working intelligence is just one aspect of dog IQ. It’s certainly flawed and doesn’t tell the full story. However, it’s a great starting point. But more importantly, it’s the only type of intelligence we can objectively measure.

Even Stanley Coren will admit that obedience and work is not everything. In fact, Coren believes that there are two other crucial components, called adaptive and instinctive intelligence. Both of which, are just as, or more important.

When we say instinctive intelligence, we’re referring to a very specific type of innate intelligence. In the past, all dogs were purpose-bred. That is, they were developed to provide some value to our society as helpers of humans.

Some dogs were used as herding dogs, others as guardians, shepherds, hunters, pointers, retrievers and the list goes on. Through many generations of breeding, this special “talent” and intelligence has been ingrained into them.

For example, Welsh Corgis were bred to be some of the best herding dogs. With little to no human training, these dogs know what to do when put in front of livestock. They’ll push and drive sheep on purely instincts. This is their instinctive intelligence.

The bull terrier’s prey drive can be an incredible thing to watch. If unleashed, they’ll spot a squirrel and be off before you know it.

Bull Terriers, on the other hand, had multiple jobs in the past. Originally, they were bred to be a more aggressive dog used for a blood sport, that is, rat-baiting. This is why these dogs are tough and a lot more athletic than you think.

However, shortly as the ban of the blood sport, Bull Terriers were repurposed for vermin control. In an era where production mills were booming, rats frequently infested the buildings. This is where the Bull Terrier, along with other terriers, came in.

They are still great at ratting on large farms today. This is all thanks to their prey-instinct or drive on the field. Combined with their wicked agility, Bull Terriers are smart enough to chase down and cut off rats to safely eliminate or secure them.

In fact, the world record holder for ratting goes to a Bull Terrier named Jacko. In a 19th century rat pit, Jacko eliminated 60 rats in a span of just two minutes and 42 seconds. All this, is thanks to the Bull Terrier’s high instinctive intelligence.

For example, one owner explains to us how his Bull Terrier learns.

Frank loves to play but will watch us closely during our down time. Now he knows how to open our doors by jumping at the handles.

Louis’ Bull Terrier is frequently trying to get to his owner, even if there’s a door in between them. But by learning through observation, Frank the Bull Terrier is showing some clear signs of high adaptive intelligence in the home.

Another Bull Terrier owner explains to us just how easy his dog learns from mistakes.

My dog’s favorite thing to do is when we go to the backyard to play ball. And as soon as I grab my hat, he goes nuts, already knowing where we’re going.

This dog is great at learning from previous experiences, which is another indicator of a high adaptive IQ. Because the owner always wears his hat before he plays catch with the Bull Terrier, the dog has learned what the specific action meant.

These are just two examples of high adaptive intelligence in Bull Terriers, though there are plenty more on the internet. And if you asked any Bull Terrier owner, they would likely give you examples just like these!

Is Your Bull Terrier Smart?

Like with every dog breed, the intelligence of the Bull Terrier can vary greatly. So who better to ask this question than with real Bull Terrier owners?

That said, we surveyed popular dog forums for answers to this question: is your Bull Terrier smart? Here’s what these owners had to say:

1. Luci07 says No: “Very broadly speaking english bull terriers tend to be clowns and not always very bright. But my Staffords are great family dogs and tend to be brighter dogs.“

2. Betty Orange says Yes: “They are certainly complex, but definitely not thick, in fact i think they are really smart but have no real interest in pleasing you, although they are affectionate.”

3. Sonjafoers says No: “Ours is definitely not blessed with intelligence! She’s stubborn, in a world of her own and tests our patience to the max – despite that I love her to bits and laugh at her & with her every day.“

4. Xchairity_casex says Yes: “They are very smart and need a lot of outlets for their intelligence be it fun games to play or family activities, whatever so long as it is with their person.“

5. Saintbully says Yes: “Bull Terriers need a lot of patience and time but they are not dumb by any means. They are just as capable and intelligent as any other dog.“

7. Charminthes says No: “Honestly, he’s not the brightest dog of the pack but he’s so funny and charming. Why do we need such a smart dog anyway?“

8. Molly_moppet says No: “Sorry, but they’re really, really, really stupid. They’re good with kids though and they’re affectionate. But if you want something even remotely capable of thinking for itself, don’t get one.”

9. Foxywench says Yes: “Bull Terriers are the clowns of the dog world. Most people think clowns are dumb when in fact they are the most advanced performers of any circus often doing things that the other acts WONT.“

10. Lisbonunited says Yes: “Contrary to belief, bull terriers are quite smart dogs. I don’t think they learn any slower than other dogs, they just like to have fun and make their owners happy/laugh. If this makes them dumb, then I guess so.“

The short answer is, not really. Dogs don’t really need to be that smart, especially if you just want to own a companion dog. All dogs are smart enough to provide us with the basic commands. In fact, all dogs can learn up to 150 words.

Unless you need a dog for a specific job (herding, guarding, etc.), then pick a dog breed that has the instinctive intelligence in that category. Otherwise, there’s no point in bringing home the Border Collie (number one ranked) purely on their “intelligence.”

Rather than picking a smart dog, consider the personality and temperament of the dog breed you want to bring home.

Bull Terriers are highly active dogs that are widely considered “clown dogs.” This just means they like to have fun and brighten your day. They’re one of the best dogs for all families and owners, especially if you can reciprocate the love.

Pick up a Bull Terrier and you won’t regret it!

Do you own a Bull Terrier? And if you do, how smart is your dog? What smart things has he done? Let us know in the comments section below.