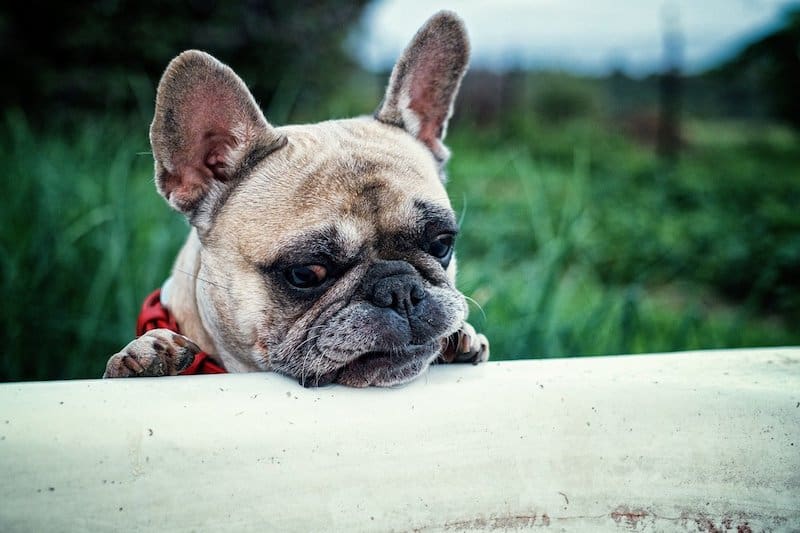 There’s a reason why French Bulldogs are one of the 5 most popular dog breeds in America. A Frenchie is affectionate, playful, adaptable and overall, well-tempered dogs. And despite their low intelligence ranking, they’re actually quite smart.

So, are French Bulldogs smart? French Bulldogs are the 109th smartest dog breed out of 138 breeds. As such, they’re classified as “below average” dogs for obedience & working intelligence. The low ranking is likely due to their stubborn nature. However, Frenchies are some of the highest adaptive-intelligent dogs.

Frenchies aren’t the type to blindly do your bidding for the sake of it. But in reality, they’re so much smarter than people make them out to be. Let’s explore why they’re ranked low for dog intelligence and what actually makes them smart dogs.

Nearly all owners that first discover the Frenchie’s low canine intelligence ranking are shocked. I’ll admit the method used to measure a dog’s intelligence is flawed. However, we must first understand how they came up with this ranking.

The trials used for the smartest breeds list was organized by canine psychologist, Stanley Coren. With the help of 199 obedience trial judges scattered across North America, Coren was able to collect obedience trial data of several breeds.

The trials were conducted based off Coren’s criteria, which he used to construct his list of the most intelligent dog breeds. He used the following to measure obedience & work intelligence:

Not every dog breed in the world was tested. Only dog breeds that were recognized by the AKC or Canadian Kennel club participated in the trials. As a result, this cut out mixed breeds and the more exotic breeds from around the world.

In addition, only dog breeds with at least 100 responses qualified for the most intelligent dog breeds list. Fewer responses meant less reliable data. Fortunately, French Bulldogs were both popular and recognized dogs – so they easily made the cut.

Though Frenchies were included in the trials, they didn’t perform as well as most owners would think. Rather, they were ranked the 109th smartest dog breed out of 138 qualifying breeds in obedience and working intelligence.

This puts them in the “fair working” intelligent category among all the dog participants. And while Frenchies are not among the lowest intelligence class, they are below what is considered average. But what does this translate to?

Breeds in the French Bulldog’s intelligence class are able to learn a new command with 40 to 80 repetitions. In addition, they’re only able to obey a known command (on the first try) with a 30% or better success rate.

They’re far from the smartest dogs. Nonetheless, there’s nothing wrong with being “below average.” In fact, some of the most popular dog breeds are in the same class, such as Pugs, Chihuahuas, Malteses and the Great Pyrenees.

Frenchies vs. The Smartest Dogs

The world’s smartest dog breeds are in a class of their own. With just 10 dog breeds in the top class, they’re able to learn a new command with fewer than 5 repetitions! This means they’re at least 8 times faster at learning than Frenchies.

The top 10 are also some of the most obedient dog breeds in the world. As such, they’ll obey a known command on the first attempt with a 95% or better success rate. Their success rate is roughly triple that of the Frenchie’s.

Coincidentally, these smartest dogs are also the household names of the canine kingdom. For instance, this ultra-exclusive list includes the Golden Retriever, Labrador, Rottweiler, Poodle, Doberman, German Shepherd and more.

Is Your Frenchie Smart?

It’s fairly hard to gauge a Frenchie’s intelligence purely based on a trial measuring obedience tricks and commands. Rather, i’d say the best way is to ask real French Bulldog owners themselves.

That being said, we surveyed owners on the popular Frenchie Subreddit and various other dog forums for answers to this question. Here’s what these owners had to say:

1. Soup4breakfast says Yes: “I didn’t know Frenchies had a reputation for being dumb. I mean compared to a working dog, maybe. Georgie is smart in a mischievous way. She uses all her powers for evil.”

2. Decorhearst1 says Yes: “Don’t listen to people saying frenchies aren’t smart. If you underestimate this intelligence of these dogs, you’ll get tricked and fooled!“

3. Surfcrush says Yes: “Mine is also very defiant. And that’s how I know she’s smart- she’s choosing to be a diva and disobedient. That is actually really endearing in a strange way.“

4. Givetakeabones says No: “I’m sorry but my frenchie is as intelligent as a brick. He’s still the most loving dog in the world and I wouldn’t trade him for any other dog.“

6. Skeetledunk says Yes: “Our puppy is so incredibly smart and affectionate. He only wants to be around people, 24/7 (which causes it’s own problems). He’s also housebroken since about 11 weeks old.“

7. Lebran says Mixed: “My French Bulldog Huxley (only 5 months old) can seem smart as a whip one moment, then dumb as a post another. You never know what you’ll get.“

8. Anonymous says Yes: “My Frenchie was so difficult to housebreak. They are not labradors, that’s for sure. But I don’t think they’re dumb. They just work hard to make it seem like they are.”

9. Pitbullsonice says Yes: “I don’t know why so many owners think their frenchies are dumb. If they’re anything like mine, they’re super smart but stubborn.“

10. Gruntbuggly says No: “No, he’s not very smart. We still adore him, but he’s dumb as a post. He’s very lovable and we don’t really care.”

Why Frenchies Rank Low For Intelligence

French Bulldogs are smart and so many owners will agree. But why is it that they performed so poorly on Stanley Coren’s dog intelligence test? In short – the test is flawed and not suited for French Bulldogs, among other breeds.

If you think about it, Coren’s test is basically an obedience test. So it’s not surprising that some of the worst performers also happen to be some of the most stubborn and strong-willed dogs – including the French Bulldog.

Yes, Frenchies are infamously stubborn dogs. Though playful and bright, these dogs will surely go on their stubborn streaks. According to the AKC, Frenchies are hard-headed and require a plenty of patience and positive reinforcement.

French Bulldogs are very stubborn dogs. I’m dealing with the shark phase and a biting problem too. Otherwise, she’s a total sweetheart most of the time.

It’s not that Frenchies are too “dumb” to quickly learn and obey a command, they just don’t want to. If they don’t feel like it, their stubbornness will kick in. And just because they don’t follow a command, doesn’t mean they don’t understand what you meant.

This is not to say French Bulldogs aren’t loyal dogs. As a matter of fact, it’s quite the opposite. Frenchies are so loyal to their human companions that they may come off as overprotective or slightly territorial of the pack.

There’s just more to these dogs than blindly following the commands of their owners. That is, a Frenchie has an independent mind and will often “think on their own.” It’s one of the main reasons why they have such high adaptive intelligence.

Why French Bulldogs Are Smart

Stanley Coren’s canine intelligence rankings only measured obedience & working intelligence. But according to the researcher, there are two other dimensions of dog IQ that may be even more important in measuring dog IQ.

The others are adaptive and instinctive intelligence. It’s just that these components of dog IQ are much more subjective, thus, harder to measure. On the other hand, obedience and working intelligence can be objectively measured to an extent.

According to Coren, instinctive intelligence refers to the ability or special skill that the dog breed was born with. It’s their innate talent, or rather, what they were bred to do. Back then, all dogs had a purpose in society, including Frenchies.

For example, the Australian Shepherd’s instinctive intelligence is without question, herding. The fact that they’re able to push livestock into formations with little to no training requires this special type of intelligence.

This type of intelligence can be retrieving, herding, hunting and even companionship. And in the French Bulldog’s case, it’s companionship. That’s what they were originally bred for and what they continue to provide today.

They are wonderful pets and companions – just be ready for plenty of funny noises, farts, burps, and a wiggly nub of a tail that will melt all your problems away.

While the larger bulldog breeds were bred for bull-baiting (the now-illegal blood sport), French Bulldogs were specifically bred down in size with a calmer temperament for companionship. You could even call them the “toy” versions of bulldogs.

Frenchies were popular during the 1800’s, when lace workers immigrated to France in search of new job opportunities in the booming industry. They were primarily used to keep the owners company in a country where immigrants knew few faces.

This is why Frenchies are mild-tempered, cheerful and affectionate dogs. They know how to bring a smile to their owners’ faces because they were bred for the job. And perhaps, it’s why they’re such popular dogs today!

The final dimension of canine intelligence is adaptive intelligence. In contrast, this type of IQ refers to the dog’s ability to solve problems and learn for him or herself. This is where the French Bulldog truly shines among the rest.

Take for example, this Frenchie with an amazing understanding of human emotions. Her owner tells us why she’s such an adaptable dog, saying:

Isabel, our Frenchie, has a great understanding of emotions. She’s usually hyperactive and a hand full, but on days that I don’t feel well, she’ll instantly calm down.

Through plenty of experience with her owner, Isabel was able to interpret what her owner feels. As such, she changes her behavior and attitude based off the owner’s – a clear sign of adaptive intelligence in this French Bulldog.

Another French Bulldog owner explains how his “super smart” Frenchie is able to learn multiple languages. Or rather, multiple ways to saying “treat.” He tells us:

My Frenchie knows the word for ‘treat’ in 3 languages because each time I have to ask, ‘should we give her a X,’ she picks up on context clues. Low intelligence is just a front.

We can relate to this owner. Our Pembroke Corgi is bilingual, but only with words that involves food or treats. Even after spelling out the name of the treat, she’s caught on to that too. Now, we have to make sign languages.

These are just a few stories of high adaptive intelligence in French Bulldogs. In reality, there are so many other stories just like these. If you asked any Frenchie owner, you’d hear the same types of anecdotes and amazing incidents!

So how smart is your French Bulldog? Is he smarter than the rankings make him out to be? Let us know in the comments section below.