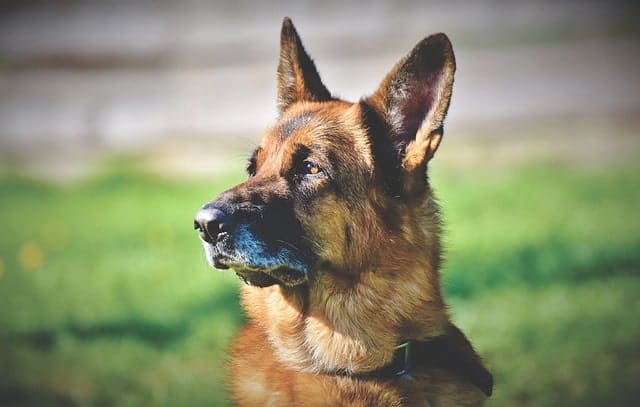 The German Shepherd is the face of the police K-9 force. They’re courageous, athletic, powerful and sometimes loyal to a fault. But were these police dogs chosen because of their intelligence or intimidating looks?

German Shepherds are the third smartest dogs in the world. But how did we come to this conclusion? Who ranked these dog breeds based on intelligence?

The list of smartest dogs was developed by canine psychologist, researcher and pHD – Stanley Coren. Back in 1994, he requested the help of 199 obedience trial judges from North America.

Despite the enormous response, not all dog breeds made the final cut. Only breeds that received at least 100 evaluations were qualified for Coren’s dog intelligence list.

Thanks to the overwhelming popularity of the German Shepherd in the USA, they easily met these requirement. Plus, GSDs are universally recognized as a distinct breed with virtually every kennel club in the world.

How the German Shepherd Performed

As expected, the German Shepherd performed exceptionally well. Only two other dog breeds managed to beat them for obedience and working intelligence – the Border Collie and Poodle.

German Shepherds were placed in the top dog intelligence class, among the top 10 dogs. Breeds in this category are able to learn a new command with fewer than 5 repetitions.

In addition, German Shepherds showed characteristics of high obedience. They can successfully obey a known command on the first attempt with a 95% or better success rate.

Coincidentally, some of the most popular dog breeds were also in this same intelligence class. Dog breeds such as the Golden Retriever, Rottweiler, Labrador, Doberman, Papillon and Blue Heeler made the cut.

German Shepherds vs. The Least Intelligent

On the other side of the spectrum sit the “least intelligent” dog breeds, at least according to Stanley Coren. Not only are they much slower learners, but also a lot less obedient.

For reference, the breeds that performed the worst include the Beagle, Basset Hound, Bloodhound, Chow Chow, Shih Tzu and the Pekingese.

Dogs in the least intelligent category required between 80 and 100 repetitions to learn a new command. This meant that German Shepherds are at least 16 times faster at learning a new command!

As for the obedience section, low intelligent dog breeds were able to obey a known command on the first attempt with a 25% or lower success rate.

While this success rate seems low, there can be other factors, such as the dog’s stubbornness and handler familiarity, that may contribute to such low marks.

Other Reasons German Shepherds Are Smart

Stanley Coren’s smartest dog breeds list was based on just one dimension of canine intelligence, that is, obedience and work intelligence. And although it’s not the best way to gauge true dog IQ, it can be measured in an objective manner.

With that said, there are actually three components of dog intelligence, according to Stanley Coren. The other two, which may actually be more important, are instinctive and adaptive intelligence. Both of which, the German Shepherd excels in as well.

Instinctive intelligence refers to the natural ability or innate skill that the dog was originally bred for. In the past, all dogs were bred for a specific role or purpose. In addition, few dogs were actually bred for solely companionship.

For example, Welsh Corgis were bred to herd cattle, sheep and other farm livestock. But without little to no human training or intervention, Corgis are able to instinctively round up and drive livestock in a desired direction. That is their instinctive intelligence.

Likewise, German Shepherds were bred to be the ultimate utility dogs. In other words, they could do it all as a multi-purpose working dog. That being said, their instinctively intelligence is in herding and livestock guarding.

German Shepherds did, and excelled, at almost everything. They were used as herding dogs, sheep guards, police dogs, therapy dogs and much more.

Gail Norris, a German Shepherd owner tells us, “every night as soon as I got into bed and turned off the light, she would go through every room of the house, stopping to push aside the living room drapes with her head, and letting out a menacing growl. Once Sheba was satisfied that no one was lurking around, we settled down for the night.“

To become so great at so many dog jobs, you need to have high instinctive intelligence. And, that’s exactly what the German Shepherd has.

Just check our these German Shepherds doing what they do best:

Though there’s no objective way to measure this type of intelligence. Though, we do have real owner stories that suggest high adaptive intelligence in German Shepherds.

For example, a German Shepherd owner tells us:

If we’re sitting on the couch, I can tell Odin “Ok Odin, its bath time.” and he’ll hop off the couch, go into the bathroom and get in the tub.

She adds, “I’ve never met a dog who can do that before!” Kelsey’s GSD quickly learned that the action that follows the words “bath time.” From his previous experiences, Odin knew exactly what was going to happen and did what he had to do. Smart boy, indeed.

As we already know, learning verbal commands is easy for the German Shepherd. As such, learning word correlations is not a problem for this dog. But how about learning actions through other stimuli?

Another GSD owner, Jacob, tells us why his German Shepherd is highly intelligent:

I go into my bathroom all the time, but the moment I put on sunscreen he knows that we’re about to go for a walk and waits patiently next to his leash.

Scooter the German Shepherd learned a specific scent and the subsequent action. The fact that he’s able to associate not just commands, but also scents, with an activity shows he has high adaptive intelligence.

These are just two examples, but if you asked any German Shepherd owner, they would probably tell you equally remarkable stories of adaptive IQ in these dogs.

Is Your German Shepherd Smart?

The experts tell us that German Shepherds are smart, but what do the owners say? We believe the best way of gauging a dog’s intelligence is by asking the owners themselves.

So, we surveyed the popular GSD Subreddit and other online dog forums for real answers from real owners. Here’s what they had to say about the question.

1. Motheroftheworld says Yes: “German Shepherds are very intelligent and they’ll learn to push your buttons. They are amazingly loyal and will want to be with you. You will never go to the bathroom alone again, ever.“

2. Gsdinthehome says Yes: “My GSD is the most loving and smartest dog that I’ve ever owned. He’s very sharp and picks things up very quick – commands, situations, etc.”

3. Graphitefingers says Yes: “She’s a very intelligent dog and definitely keeps me on my toes. Thankfully she’s not destructive and is really well behaved. She likes to see how far she can push me, but that comes with owning an intelligent breed.”

4. Downtownvehq says Yes: “If you underestimate the intelligence of a German Shepherd, they’ll run all over you – sometimes literally.“

5. Dominantfighter says Yes: “While training with treats, our GSD is the most obedient and intelligent dog I’ve ever met. She learns new things almost immediately and does whatever I tell her.”

6. Saffellbot says Mixed: “My German Shepherd had a defiant phase when she was a young puppy. It took a few months of constantly being assertive with her before she finally came around.”

7. Underrateddawg says Yes: “After owning 7 dog breeds in my lifetime, there is no dog breed that I believe is more intelligent than a German Shepherd.“

8. Richmondc says Yes: “I’m in a training class with him and most shepherds including my past ones took 2-4 months in the beginners class. But mine moved to intermediate in 3 weeks. He picks up everything pretty fast, like he understands English.“

9. Dandaman76 says Yes: “Potty training was a breeze for my GSD. He learned all the basics in a week, so I’m convinced that there isn’t a smarter breed.“

10. Deadmanstheory says Yes: “My German Shepherd actually learned how to open the fridge. If that’s not intelligence I don’t know what is.“

Because German Shepherds are so intelligent, they require a ton of mental stimulation. Without enough mental activities, these dogs can certainly exhibit destructive behavior.

Mental stimulation can come in many forms, such as brain games, obedience training and dog puzzles.

Personally, I think smart toys and dog puzzles are great! They’re perfect for those that can’t spend hours a day with their GSDs. With that said, here are my favorite dog puzzles.

One of my dog’s all-time favorite is the StarMark Bob-A-Lot. It’s an interactive bobble toy that requires you German Shepherd to tilt it a certain way to release his favorite treats.

It comes with 2 chambers so you can put your dog’s meal and treats inside. For your German Shepherd, make sure to get a size large. If you’re interested, I highly recommend checking it out at Amazon.

A dog puzzle that my dogs absolutely love is the Nina Ottosson Dog Puzzle. There are 3 variations, but I went with the Hide n Slide.

It’s a challenging puzzle where your German Shepherd needs to move the sliders to reach his favorite treats. Put in a few of his favorites and he’ll be all over it! I suggest you take a look at Amazon here.

There are a ton of fantastic puzzles and toys that’ll help with your German Shepherd’s mental stimulation. If not what I recommended, I suggest you get them something.

Are German Shepherds For Me?

German Shepherds are fantastic dogs. They’re one of the most popular breeds in the world for a reason. But know that they come with a lot of work.

If you’re looking for a big lap dog or a low maintenance dog, these dogs are not for you.

When deciding which dog breed to raise, never pick one based on how “intelligent” they are. All dogs are capable of learning basic tricks and commands. Some just require more patience than others.

Instead, ask if the dog breed’s temperament and personality match yours. Are they a good fit for you and your lifestyle?

German Shepherds are devoted, brave and freakishly intelligent. If that sounds like a pet you’d like in your family, then go ahead! You certainly won’t regret it!