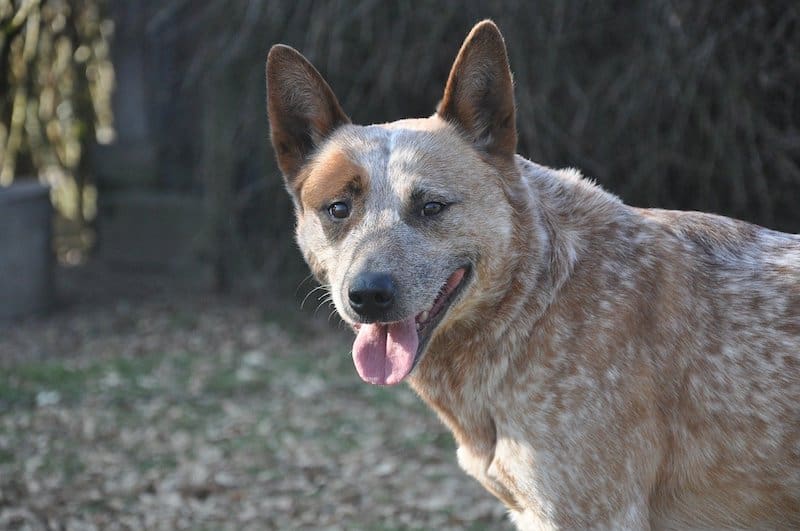 Also known as the Australian Cattle Dog, Blue Heelers are vibrant dogs with a pleasant curiosity for life. Always full of energy, these heelers have some of the best work ethics in the dogdom. But are they intelligent workers?

So, are Blue Heelers smart? As the 10th smartest dog breed for obedience & working intelligence, Blue Heelers are highly intelligent dogs. They’re great with obedience, but they really shine with instinctive intelligence as arguably the world’s best cattle herding dog. They’re not just hard workers, but smart workers too!

Unlike most dog breeds, Blue Heelers are in the top group for multiple dimensions of canine intelligence. Let’s further explore what actually make these dogs so intelligent.

The current list of smartest dog breeds was developed by a pHD and canine psychologist named Stanley Coren. In his research, he received the help of 199 obedience trial judges from the AKC and CKC.

Coren had the obedience judges assess and evaluate as many dog breeds based off the criteria he developed. Here’s what his criteria was based on:

Keep in mind, not all dog breeds participated in Coren’s intelligence trials. Only those that were recognized by the American and/or the Canadian Kennel Club were evaluated.

In addition, not all participants made the final list of smartest dogs. Only breeds with at least 100 evaluations qualified for that list. In the end, only 138 dog breeds qualified.

As popular as Blue Heelers were (and still are), they had no problem making the list. Plus, they’re recognized by both North American kennel clubs.

Blue Heelers performed exceptionally well on Coren’s tests. So well, that they received the title as the 10th smartest dog breed in the world. But what were their results during the trials?

However, learning was not the only thing they excelled at. Blue Heelers had a 95% or better success rate when asked to obey a known command on the first try. This makes them some of the most obedient animals, ever!

For reference, other dogs in the top 10 intelligence category include your household names. The smartest dogs included the Golden Retriever, German Shepherd, Labrador, Rottweiler, Doberman and Poodle.

There’s nothing wrong with being “average.” But the Blue Heeler did score significantly better than the rest of the field. So, what was the average dog breed like in Coren’s trials?

The average dog needed 25 to 40 repetitions to learn a new command. This means that Blue Heelers were at least 5 times faster at learning new commands than average!

Furthermore, average dogs had a success rate of 50% or better when asked to obey a known command on the first attempt. Not bad, but not quite on the same level as the heeler.

And if you’re curious, the average dogs are some of the most prevalent dog breeds in America. This group includes the Australian Shepherd, Husky, Boxer, Dachshund, Greyhound and much more.

How Smart Are Blue Heelers?

We think Blue Heelers are pretty smart. Stanley Coren will agree with us. However, the best way to really gauge how intelligent these dogs are is by asking real Blue Heeler owners.

To do this, we surveyed the popular heeler subreddit and various dog forums to ask owners this question. Here’s what they had to say.

1. Sup3rdad22 says: “I have actually bought a book from Zak George and I’ve started the clicker training today. She’s 8 weeks but she’s super smart. I already have her ringing bell for potty, sit and lay down. It’s incredible how smart she is.“

2. Wreckedintraining says: “Even after owning multiple golden retrievers, my heeler feels like a much faster learner and definitely more responsive and excited to learn. Is it just her or anyone else too?“

3. Traceysgarden says: “I heard blue heelers were smart before. But they’re not just smart, they DEMAND learning. It’s like they know they’re smart and need to maximize it.”

4. Unfixedmidget says: “The heeler breed is wicked smart. They’re very eager and capable of learning anything and everything you throw at them. This will also help with mental stimulation as they will be pushed to learn new things frequently.”

5. Lickodoggo says: “My heeler practically taught herself how to potty train. These dogs are insanely smart which isn’t always a great thing.“

6. Jlward says: “How smart are they? Heelers are known for testing their owners. Mine is 4 and a half and he still tests me.“

7. Smthgbrightinstars says: “Sometimes I think my dog is smarter than the humans that I surround myself with. He somehow always know what my intentions are and somehow understand words I never taught him.”

8. Burritoeclair says: “You don’t want a bored heeler. With so much energy you want to find a smart way to burn through a lot of it. These dogs are some of the smartest dogs around capable of doing really dumb things. They need our love and guidance.“

9. Majorlexy66 says: “These dogs are so intelligent that it’s kind of mind blowing. But I’ve also seen them behave super dumb.”

10. Ameriaheart says: “Bailey, my 1y/o heeler is the smartest dog i’ve ever met. Having raised poodles my whole life, my heeler is a quicker learner. She’s also much more vocal and better at communicating!“

Other Reasons Why Blue Heelers Are Smart

When it comes to measuring a dog’s IQ, there are three dimensions of canine intelligence. We already discussed obedience and working intelligence, but the other two components may be more important.

The other two are instinctive and adaptive intelligence. Fortunately, it’s well documented that Blue Heelers excel in both other types of intelligence.

Have you ever wondered why Australian Cattle Dogs got their nickname, the Blue Heeler? They get their name because they’re known to nip at the heels of cattles, which is one of the most effective ways of herding these animals.

They weren’t taught this method of herding. Being able to instinctively push livestock into formations requires instinctive intelligence. And according to Cesar Millan, they’re some of the best herding dogs in the world.

That being said, the Blue Heelers instinctive intelligence in herding is off the charts. In fact, it’s probably even more impressive than their results with Coren’s obedience tests.

The final component of dog intelligence is adaptive intelligence. This intelligence refers to the dog’s ability to learn from mistakes or solve problems. In other words, are Blue Heelers capable of learning for themselves?

For example, one heeler owner explains to us how his dog has learned to communicate with humans, saying:

He will hold a conversation when something doesn’t go his way or he’s in trouble. He’s very smart and has learned to talk out his vocal chords. With his body language and movement of the paws, he tells us what he wants. He’s too smart.

His heeler learned from previous experiences what works and what doesn’t when trying to communicate with the humans. This is a clear cut sign of high adaptive intelligence in these dogs.

Also a great communicator, another owner’s Blue Heeler figured out how to tell the owners that she needs to use the washroom.

She’s brilliant. When we use the washroom and if she needs to also, she’ll go there and gets our attention. Then we’ll go out and she’s praised. Now, this is just an example, there are many other intelligent and smart things she does.

Again, learning to communicate what she wants means high adaptive intelligence. And while these are just two examples from the dogs, there are plenty more stories out there.

If you meet any Blue Heeler owners, just ask them what smart things their dogs do. They’re more than likely going to share stories just like these.

Contrary to popular belief, a highly intelligent may not always be a good thing. Generally, the smarter a dog is, the more attention and care they need.

That being said, smart dogs like the Blue Heeler need a lot of mental stimulation in order to live a healthy and happy life. Mental stimulation can refer to obedience training, hide and seek, “treasure hunt” or whatever keeps their minds busy.

Fortunately, we have dog toys and dog puzzles that can do some stimulation for us when we’re busy. Here are just a few of my favorite puzzles that’ll keep your heeler busy for hours!

One of my Australian Shepherd’s favorite dog puzzles is the StarMark Bob-A-Lot Dog Puzzle. It’s a bobble toy that’s weighted at the bottom. Your heeler needs to knock it around to release treats or meals.

It’s fun and great if your heeler loves food. It’s the perfect mental stimulation toy for the food-driven dog.

Another one of my all-time favorites is the Outward Hound Dog Puzzle. Hide delicious treats in the puzzle and let your heeler slide and unlock the tabs to reach the “prize.” We got this for our corgi and she loved it, especially as a puppy.

Because Blue Heelers have high adaptive intelligence, they’ll figure this puzzle out fairly quick. So it may not last long (like with all puzzles), but they sure do love it in the very beginning. I still highly recommend it, though.

Finally, I’d like to recommend the Outward Hound Hide and Seek Plush Toy. This is our Aussie’s favorite toy. But best of all, it provides some mental stimulation.

Little plush toys are hidden inside and the dog will figure out a way to get them out. We’ve seen mixed results with this. While our Aussie loves it, our Corgi wasn’t as interested. It’s still worth trying out.

There are so many options that you could go with. We would only recommend these because our dogs loved them. The point is, you should get something for your Blue Heeler – whether these recommendations or not.

Do you have a Blue Heeler? Can you tell us why you think your dog is smart or not? Leave a comment in the section below. We’d love to hear from you!

Richard has been raising dogs his whole life, including a Poodle, Pomeranian, Corgi and Australian Shepherd. He's always working with animal shelters and dog rescues because of his passion for all dogs. Fun fact: his all time favorite breed is the German Shepherd. Read More...