The Hokkaido Inu, otherwise referred to as the Ainu Dog, Ainu Inu or Seta, is truly a beautiful and loving dog. They get their name from the region they originate from –  Hokkaido, Japan. Experts believe that this breed may have been the most ancient among all Japanese dog breeds, dating back more than 3,000 years.

These dogs are highly regarded in Japan as one of the Living National Monuments of Japan. Because of such recognition, the country has been protecting this dog breed since 1937. Currently, the Hokkaido Inu is officially recognized by the American Kennel Club as a FSS breed (Foundation Stock Service). They are also officially recognized by the Japan Kennel Club as well.

Explore the cold mountainous countryside with your Hokkaido Inu because you can always rely on its strong sense of direction. You would be amazed at just how easily your Hokkaido can finds its way about the treacherous terrain. Likewise, if you have lost your way, you can trust your Hokkaido Inu’s sense of smell to identify the right path and lead you back home.

They can immediately detect the slightest change in its environment. The moment this canine intercepts an unknown sound or a smell, it takes off on a howling/barking spree. Given that this canine is otherwise silent most of the times, a howl/bark is worth looking into.

Friendliness: The Hokkaido Inu is generally a very friendly dog. With socialization and obedience training, they’ll be loving family dogs. With that said, you should always be cautious when your dog is around small children. At the end of the day, they still have their primitive hunting instincts that can kick in anytime.

Trainability: These dogs are very intelligent and their devotion makes them very receptive of training. With the right treats and the right attitude, even novice owners will be able to successfully train a Hokkaido.

Grooming: Because of their double coats, they require more grooming than their single-coated counterparts. This means regular grooming, especially during shedding season, in order to keep their coats in good shape. The good news is that the Hokkaido loves being brushed, so it could make for some excellent bonding time.

Adaptability: The Hokkaido needs a lot of free space to run around. They’re dogs meant for the outdoors and should be treated as such. They can live in apartments, but you really need to give them enough exercise on a daily basis. The Hokkaido Inu will thrive in cold temperatures, but will suffer in the heat.

Activity: Always give your Hokkaido enough exercise. They may not need as much physical activity as other dogs, but they need as least a long walk a day. Remember that these dogs were originally hunting dogs that ran around in the wilderness. If you can’t give them exercise, look for another breed.

Discussed as follows are some distinctive features of the Hokkaido – 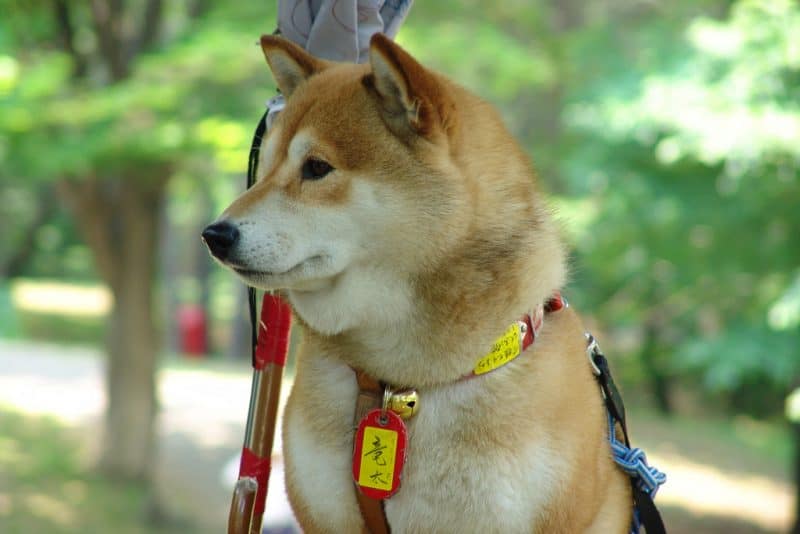 Hokkaido Inu carries a legacy of more than 3000 years, thus being one of the oldest Japanese dog breeds. Among the six native dog breeds, the Hokkaido was the only one which the Ainu tribe brought to the Hokkaido Island during their journey for a new home.

During the Kamakura era dated around 1140 AD, members of the Ainu tribe owed their lives to this devoted dog breed. From braving the harsh climate and equally rugged terrain to hunting, the Hokkaido accompanied the members of the tribe everywhere.

However, lineage of this breed is subject to plenty of guesswork. While they bear many similarities to the Spitz, part of them may have descended from the Matagi Ken. Because the Ainu were so possessive of their belongings, they kept the breed under wraps for many centuries.

Sometime in 1869, a British zoologist named Thomas Blankiston stumbled upon a Hokkaido Inu and was immediately fascinated with it. He is also credited for having named this dog the ‘Hokkaido.’

In 1937, the country of Japan declared the Hokkaido Inu as a national monument. This meant that the Hokkaido was regarded as a rare species and thus, should be protected as such. Despite all efforts of protection and preservation, the Hokkaido Inu is still a rare breed. In fact, they’re hardly found beyond the Japanese Islands. 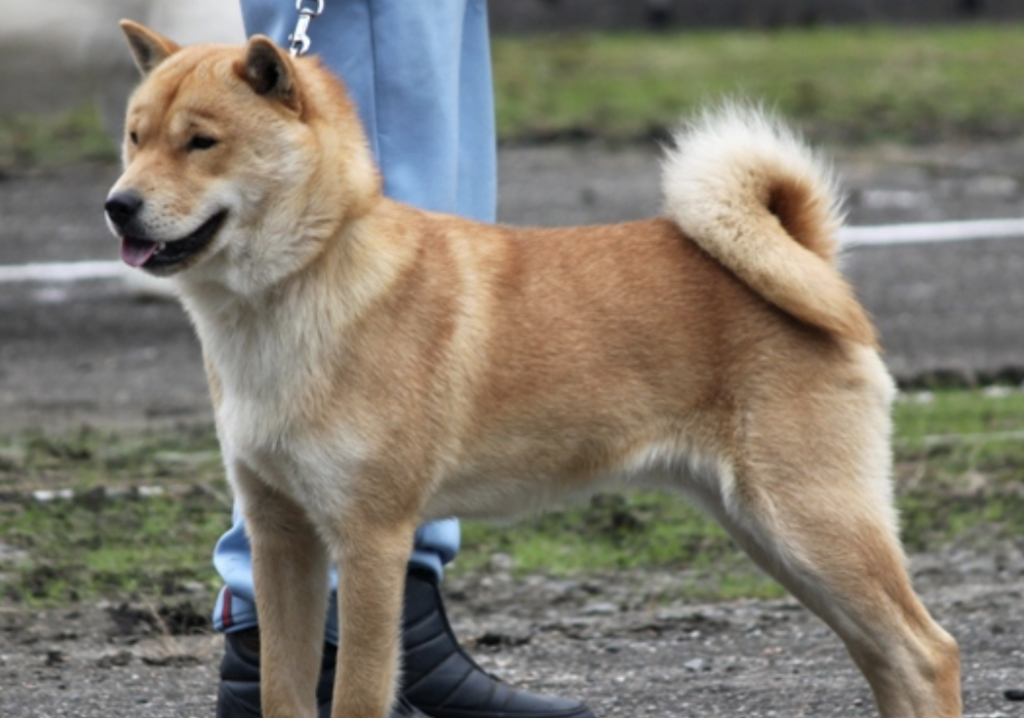 Temperament wise, the Hokkaido Inu is stable, obedient and loyal if trained well. Because this dog breed is so intelligent, you can train them without expending too much effort. But before anything else, you’ll need to establish yourself as the one in charge – the pack leader. Miss out on this one crucial step and you’re bound to have plenty of regrets later on.

A Hokkaido Inu likes to be led. So you must prove yourself as a capable and firm leader. The moment you deviate or become lenient, the Hokkaido Inu will try and assume leadership. Such a situation should be avoided, as you would soon have a spoiled dog that wants to have its way every time.

In order to bring out their best, you must train your Hokkaido well. Begin their training when they’re still a puppy. After receiving your puppy from a reputable breeder, it’s never too early to start training. Make sure you use delicious treats for the best response to training.

As the canine grows older, you must continue your training. However, it’s time to switch over to positive reinforcement. Ensure that training sessions are short and enjoyable and gradually add on to the list of commands and tricks. After a period of time, a Hokkaido won’t just respond to basic commands, but also convey its observations through long/short barks.

Usually, a Hokkaido Inu identifies one master and pledges its loyalty to him or her. As far as children and other animals are concerned, socialization plays an important role in determining their future attitude towards them.

It’s best to teach your Hokkaido Inu to be respectful towards children, as they can be an excellent playmate for them. With other dogs, the rules would be slightly different. If brought up together in a household, a Hokkaido Inu would accept the other dogs as part of the family. However, newcomers would be regarded with suspicion and may not be accepted at all.

No matter how well-trained your Hokkaido Inu is, do not leave them unsupervised with children. In addition, children in the house must establish themselves as ‘masters’ so they don’t become dominated by the canine. If your children are old enough, let them participate in the training sessions as well. 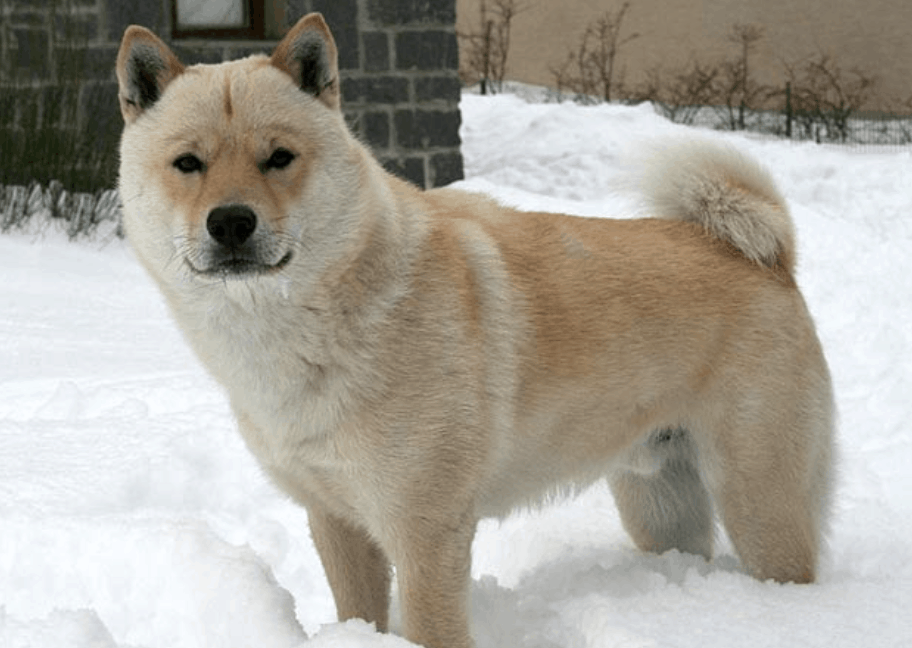 Caring for a Hokkaido Inu entails providing it with an outdoor area to roam. If your house comes with a large courtyard, preferably close to a forest, then by all means keep a Hokkaido Inu. An apartment owner could have one too, provided he takes responsibility for exercising the canine every day.

Exercise could take the form of a hike, long walk, running around or indoor games. Neglect this aspect and you will have a frustrated Hokkaido who’ll possibly vent its rage on everything from furniture and upholstery to children.

Do not let your Hokkaido off the leash in a public place. Given its suspicious nature, it could interpret ‘play’ signals as threats and assume an attacking position. Once a Hokkaido takes off, it’ll be very difficult to get them back.

A high-nutrient diet and plenty of water is what a Hokkaido Inu requires the most. Therefore, you must ensure that their diet is filled with carbs, fats and proteins. Their water bowl should always be clean and the water, fresh.

Consult your vet to determine the frequency with which you can serve meals. Some active Hokkaido Inus can require more foods. Also, if you plan to feed your dog fruits and vegetables as treats, make sure they can eat them first!

The Hokkaido Inu love being brushed, especially when it’s shedding. At the same time, it hates taking a bath. So, while you might brush its coat throughout the year, number of baths should be few and far between. The good news is that they don’t require many baths, unless they’re mischievous and tend to play dirty.

Being a self-regulated canine, a Hokkaido keeps itself clean and does not give off any odor. This eliminates the need for trimming/shaving its fur. What you need do every day is to brush its teeth. In addition, you’ll need to trim its nails and check its ears.

It’s not too difficult grooming a Hokkaido and you should not require professional help by any means.

In general, a Hokkaido Inu is prone to –

Collie Eye Anomaly – Commonly referred to as CEA, this eye condition starts as mild vision impairment, but can aggravate into blindness. Because it cannot be treated, the only way you can avoid it is by getting the pup examined thoroughly before acquiring it. Being a congenital problem, it affects both eyes, although the degree of blindness might vary.

Hip/elbow Dysplasia – This orthopedic condition is also congenital and can cause chronic pain. Your Hokkaido Inu may also suffer joint pain due to this condition, thus hindering its movement.

Other health conditions that this dog breed suffers from are anxiety attacks and seizures. This canine also likes to chew objects, which is why you must discard broken toys that might have shards. 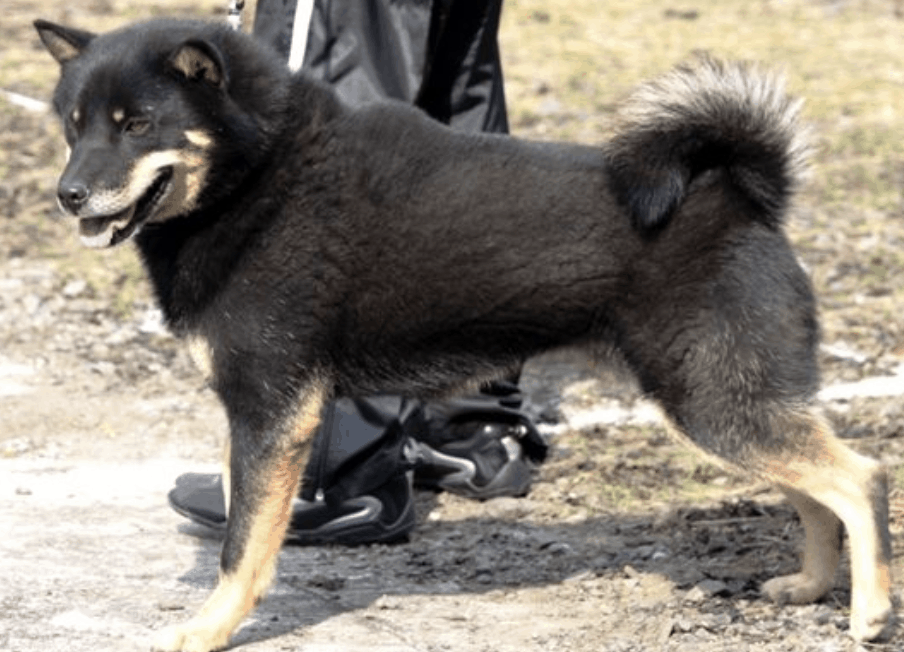 Watch the 2007 commercial of SoftBank Group that featured a Hokkaido Inu as Otosan, meaning father. You are bound to fall in love with the endearing manner in which they have been projected. Indeed after this commercial, this dog breed did catapult into fame. However, it still remains a rarity.

Take the extra steps with a Hokkaido Inu, and you will have earned a devoted and loyal companion. On the other hand, take its training lightly and suffer the consequences of an aggressive canine. As the pet owner, pick this dog breed only when you are absolutely sure you’re able to handle a Hokkaido Inu. And if you are, you won’t regret it.

The most similar dog breed to the Hokkaido may be the Japanese Spitz. In terms of physical characteristics, some believe they most resemble the Shiba Inu and Kishu Ken.