The Kishu Ken, also known as the Kishu Inu, is a Japanese dog breed with a long history of breeding in the Land of the Rising Sun. After thousands of years of breeding in the Kishu region (Mie/Wakayama Prefecture) of Japan, the Kishu Ken you see today is the result. They were originally bred as a skilled companion for hunters, but are now fairly common family dogs. They’re known for quietly stalking their prey and striking at a moment’s notice. Because of their hunting abilities, they’ve been used to take down deer and boar in the wild.

Today, the Kishu is more than your average Japanese hunting dog. They’re loyal and courageous companions, worthy of any loving owner. These Intelligent dogs can bring a lot of joy when raised properly and given the adequate stimulation.

Friendliness: The Kishu Ken are very friendly towards those they’re familiar with. They do best in a single family or owner environment, but with socialization can get along with other animals and people. They’re often aloof with strangers.

Trainability: These dogs are highly intelligent and can learn many things with enough training. However, it may be easier to train them to hunt, than to ‘roll over.’ Overall, they’re very eager to learn because of their devotion.

Grooming: The Kishu Ken has a short coat and rarely sheds. They are extremely easy dogs to groom, as they require minimal basic grooming compared to other dogs.

Adaptability: They need a lot of room to run around and get their exercise in. This means that having a Kishu in an urban setting may not be ideal. They’re not meant for the apartment life.

Activity: Always give your Kishu plenty of exercise. They need daily walks at the very least. However, if it is more enjoyable, you can always play fetch with them in the comfort of your back yard.

History of the Kishu 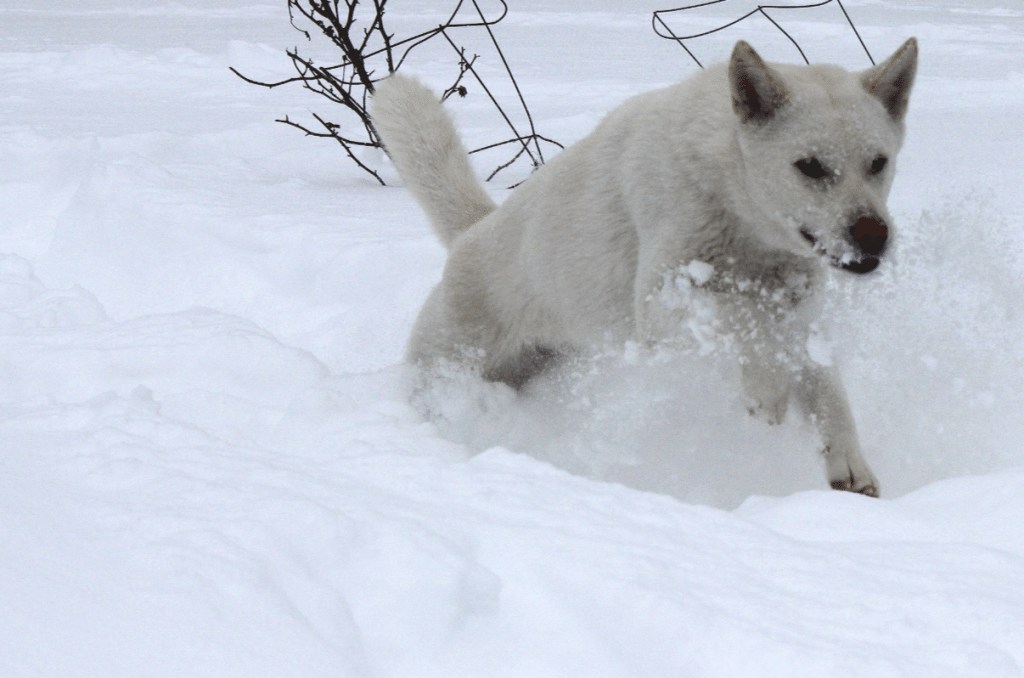 The old Kishu region of Japan is comprised of mountainous terrain. Because of this, hunters needed a highly versatile hunting dog able to thrive in such a region. Breeding of the Kishu Ken started thousands of years ago, but was not standardized until the 1930s. Some historians even believe that these dogs have been bred for over 3,000 years.

After so many years, breeders truly discovered a skillful hunting dog. There is a saying in Japan: “one dog, one shot,” which aptly describes the hunting capabilities of the Kishu Ken. There was a trained strategy involved with these dogs during their hunts. The Kishu would track down the prey and lead them towards the hunter. Once close enough, the hunter is able to kill the prey with a single shot. Hence, the Japanese expression.

At first, the white coat Kishu dogs were the minority. They were mainly black, tan, brindle, red or a mixture. But due to increasing popularity, the white coats make up the majority of these dogs today.

The Kishu Inus are very rare outside of Japan, which is the main reason why they’re not officially registered with the American Kennel Club. The AKC requires enough registered dogs of a specific breed in the country before giving official recognition. However, the Kishu is a Foundation Stock breed with the AKC.

Since 1934, the Kishu had been recognized by the Japan Kennel Club. In fact, around the same time, they were listed as a ‘protective species’ in the country. They’re even recognized as a natural monument since the 1930s. Although there aren’t many clubs that give them recognition, they’re apparently highly regarded in their home country. 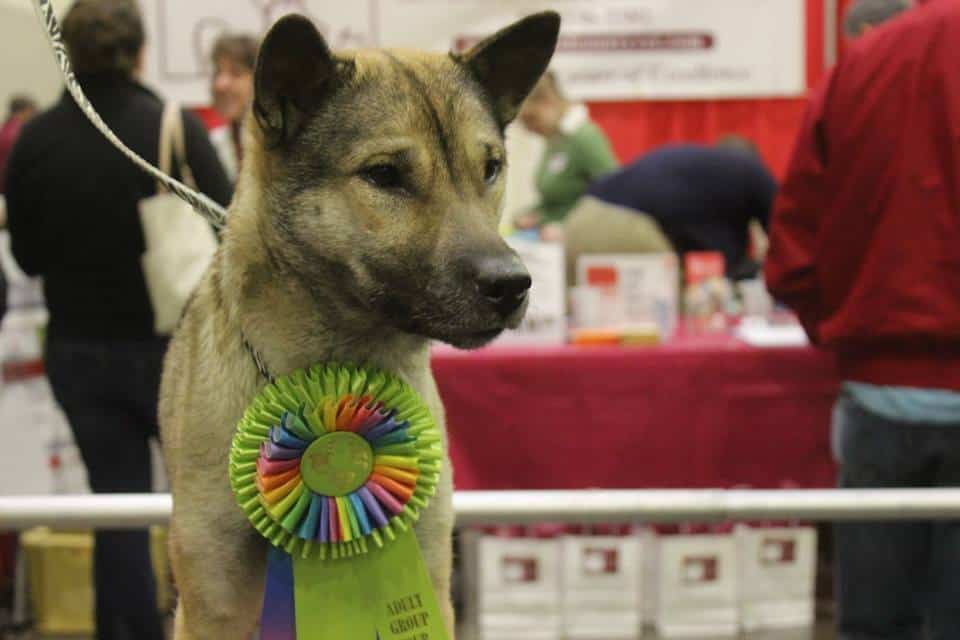 The Kishu Inu is considered a medium-sized dog breed. On average, they stand at roughly 20 inches tall and can be anywhere from 30 to 60 pounds. It’s rather rare to find a Kishu of any color outside of white, but it is still possible. They can come in a mix of red, brindle, black and tan – in addition to solid white. White has been the preferred color ever since modern domestication of these dogs.

The nose is generally black, but sometimes can come with a hint of brown or pink. This unusual coloring in the nose is more common for Kishu Kens with a pure white coat. Much like the Shiba Inu (and most Japanese dog breeds), the Kishu’s tail is curled up over the back. They have short fur with straight hair, which make them relatively easy to groom. The small, yet pointy ears are slightly slanted forwards. 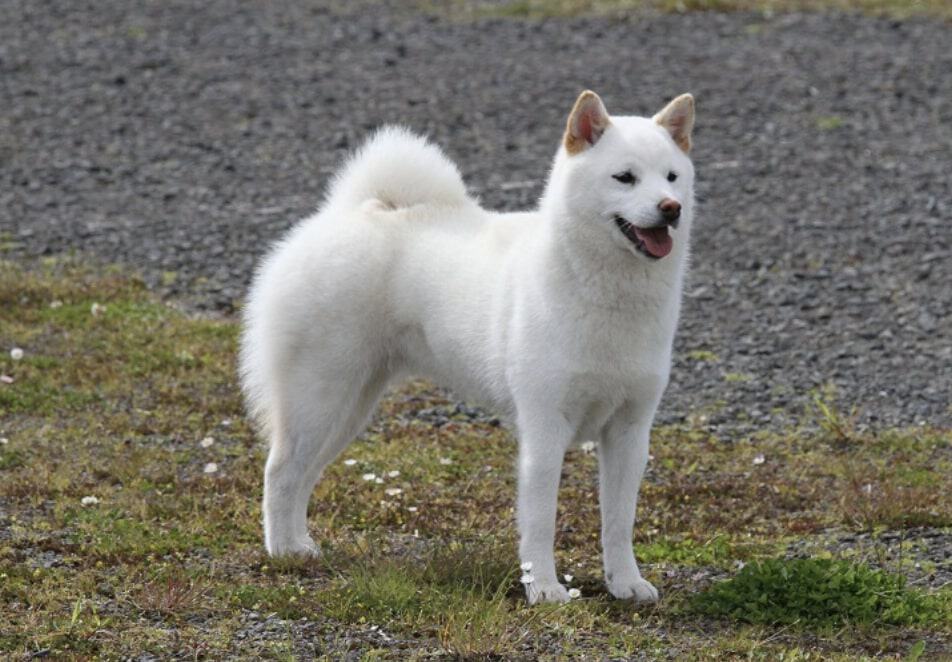 So you may be wondering, is the Kishu Ken right for you or your family? Make no mistake these dogs are as great as any other breeds. However, they aren’t your typical family dogs, such as Golden Retrievers and Labradors. The Kishu dogs have a unique personality and unique needs you need to be aware of.

As hunting dogs, they have a strong tendency to prey on small animals. If you have cats, it’s important to socialize them early on. Although they typically get along with cats, it can be risky if they aren’t familiar with one another. When it comes to other dogs, the Kishu has inherent pack instincts. This means that they could potentially try fighting for dominance of the pack.

They have much of a dominant personality and are often described as headstrong. Because of this, its essential that you properly train your Kishu at an early age. The good news is that they are a highly intelligent dog breed, capable of learning many things.

They are a one person or one family dog. There should be no confusion on who is part of its family or ‘pack.’ In a single family setting, they will demonstrate immense loyalty. And as courageous as they are, they will fiercely protect the family. Because of their high devotion, you can bet that they play well with small children within the family. 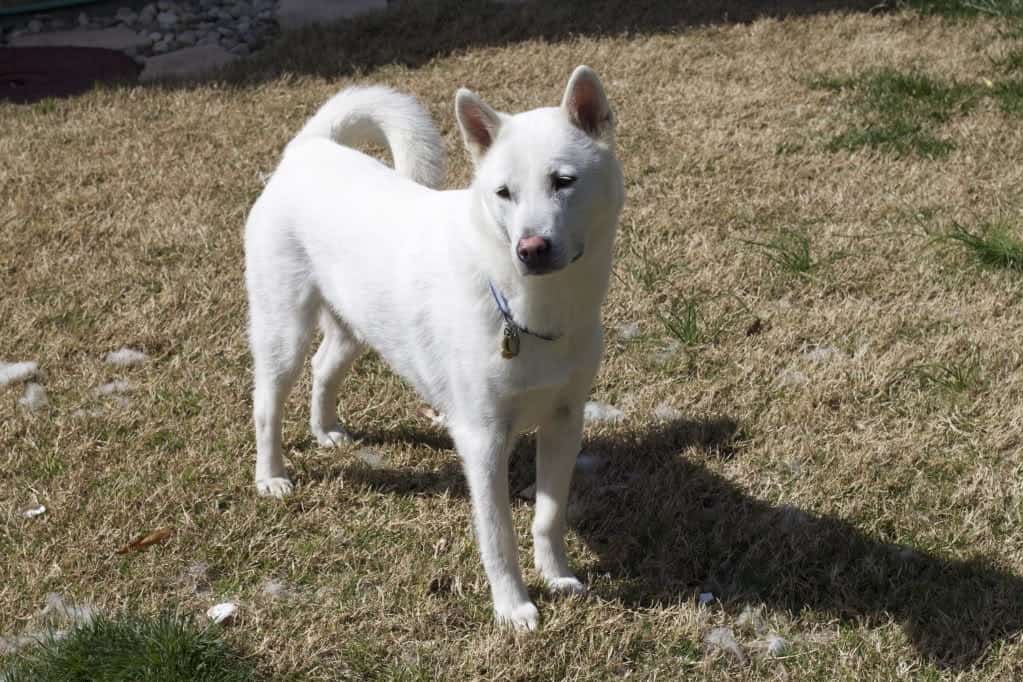 Kishu Kens typically show health problems that are common among all Japanese dog breeds. The most common medical condition they are faced with is Hypothyroidism, where the thyroid gland doesn’t produce enough thyroid hormone. Although this is not fatal by any means, it can lead to many health problems. For example, lethargy and weight gain are both possible symptoms of this condition in dogs. Fortunately, all that is required is a daily thyroid pill to combat this issue.

Another common problem is Entropion. This condition is a genetic defect where the eyelids of the dog turn inward, causing the lashes to irritate the eyeballs. Entropion can potentially lead to loss of vision if ignored for long enough. Sometimes, surgery may be required. But regardless, always consult with your veterinarian if this problem arises.

The Kishu Kens are hunting dogs, after all. It should be no surprise that they require enough physical activity to stimulate their body and mind. It’s probably not a good idea to keep these dogs locked in a small apartment all day. Rather, their perfect environment consists of a large backyard for plenty of running. If possible, they need daily walks. You can also play a physical game with them, such as fetch.

The good news is that these dogs don’t shed very often. They’ll maybe shed once or twice a year. This makes grooming very easy for potential owners. A Kishu needs brushing once every couple weeks or so to prevent build-up of debris in their coat. Wash them only when necessary and check their ears for build-up of ear wax. Their teeth need to be brushed ideally every few days, depending on what type of foods you feed your dog. There is nothing more than what is basic grooming for most dogs.

Breeds Similar to the Kishu

Some dog breeds similar to the Kishu are the Hokkaido Inu, Kai Ken and the Shikoku Inu.

Hello from Okinawa! I recently discovered that an elderly couple I had become friends with through shamisen (Okinawan "banjo") suddenly had to go into a senior citizen home and seem to have abandoned their sweet dog, "Shiro" ("white" in /nihongo/--guess what color he is?). I can't seem to find out just where the couple is so they don't know I'm caring for their dog and he's doing well. Shiro does have a small house and a long line tied to a tree next to a lovely, serene beach on the East China Sea island of Yagaji, connected to the mainland by a bridge. I can't take him to my small apartment so I go to him once or twice a day for a nice walk and to give him a nourishing , meal, brushing and massage, all of which he loves. I seem to have become his human. He is very protective of me and shocked me by charging at friends who tried to approach us. He loves "hunting" for lizards and "grazing" on one type of grass when we walk. Judging by your description of physical appearance and temperament I think he may be a pure bred Kishu Ken. He does have dew claws,too. He is very intelligent. In the couple of months I have been caring for him he very quickly learned to "sit" and "shake" and "osawari" and "otei" (rough Japanese equivalent of sit and shake) and knows "walk", "walkies" and "sampo".Every time when I arrive he leaps in the air (literally!) from side to side because he knows we will be going walking and exploring. Due to the poisonous snakes which are primarily nocturnal, we walk in the morning and afternoon before sunset. He loves having a quick soak in the ocean if there are no waves and he likes rain unless there is thunder and lightning. Twice he was so terrified he climbed into my car and squeezed himself on the floor behind my legs. I guess he thought that was the safest place! Both times I massaged him and spoke reassuring, soothing words to him until the storm passed. Despite these fears, he is quite brave and aggressive if another (male) comes near us. He is quite strong so it is all i can do to hold on to him and try to guide him away. Does all this sound like a Kishu? He looks just like the photos of the white Kishu and seems to act like one.I'm actively looking for a house with a garden (a bit rare here) so that i might be able to adopt Shiro and let him run free.Any advice you can give me regarding his care would be greatly appreciated. Many thanks, in advance, Caroline C. Latham

Hi guys! We have a dog we absolutely love and now reading about Kishu, it kind of fits all the descriptions. Is it possible to send you a pic?

Hey Claudiu, we would love to check out your dog! You can email us at: richard @ thesmartcanine.com