A Kai Ken can prove you wrong on two counts. First, it will prove to you that cats are not the only creatures that are nimble on trees. Provide a Kai Ken with an opportunity and it will demonstrate how sure footed these dogs can be on the toughest terrain.

Secondly, despite their appearance, Kai Kens are highly suitable as family dogs. The Kai Ken would surprise you by proving to be one of the most dedicated and loyal among the Japanese dog breeds.

All of this perfectly describes a Kai Ken in a nutshell – an agile, independent and intelligent dog breed. Size wise, a Kai Ken is neither too big, nor too small.

It is in between, with pointed ears, a fluffy tail and sharp instincts. Although they’re an indigenous Japanese dog breed, Kai Kens are few in numbers and usually stays out of the limelight.

Coat wise, a Kai Ken sports a dark color bearing distinct stripes. Some describe this as ‘brindle’ and others liken it to a tiger, or ‘tora’ as it is known in the Japanese dialect.

The brindle comes in three shades, namely black brindle or ‘Kuro Tora,’ red brindle or ‘Aka Tora,’ and simply brindle or ‘Chu Tora.’ In addition to giving this canine a unique touch, it acts as a natural camouflage during hunting sessions.

The strangest part about brindle pertains to the fact that newborn Kai Ken pups do not have them. They appear only as the dog grows older and change pattern multiple times until the pup is 5 years of age.

Friendliness: Among small/medium sized Japanese dogs, the Kai Ken is not your friendliest dogs. They get along well with their family through early socialization. However, they’re not great with strangers and small children. It’s recommended that you never leave children with a Kai Ken alone. Also, they’re reluctant to make friends.

Trainability: A Kai Ken is intelligent and loyal, both components to a highly trainable dog. Because they are food-driven, all it takes is some delicious treats to train these dogs. Loyalty is important for this breed, so it works best if the master is doing the training.

Grooming: They don’t require much grooming, other than basic grooming necessities. They do tend to shed, so the most you may have to do is coat combing every few days or so. It’s best to do this everyday, however. Give them their occasional baths, toothbrushing, nail clipping and they’re good to go.

Adaptability: The best thing about these dogs is that they’re highly adaptable. Whether you live in an urban setting (apartment-life) or a large ranch, these dogs will be content. However, if you do live in an apartment, you still need them to get their daily exercise.

Activity: The Kai Ken requires enough exercise on a daily basis. They were hunting dogs in the past, meaning they have a ton of energy to expend. Apartment life is okay, but don’t expect them to be okay stuck in there without much physical activity. They may start expending their energy by taking it out on your furniture.

Following are some characteristic traits that define a Kai Ken –

Origins of the Kai Ken 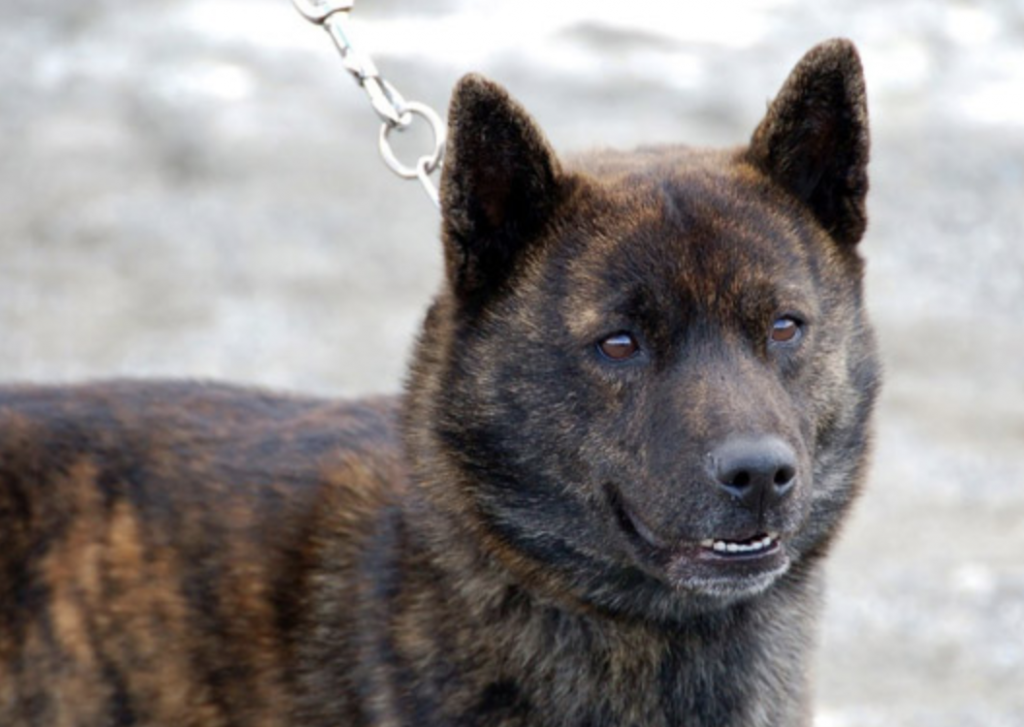 Roots of Kai Ken can be traced all the way back to Japanese mythology. Before they rose to prominence, this canine inhabited the Yamanashi Prefecture in Honshu. The breed got its name from the Kai Province, which is what the prefecture was previously known as.

Traditional Japanese literature refers to this breed as the Tora Inu, meaning Tiger Dog. Given that their main purpose was to hunt, it made a lot of sense back then.

Many characteristics of the Kai Ken can be attributed to the cold and treacherous terrain around Mount Fuji, where you needed to be tough and gritty to survive.

They helped their masters track and hunt down bear, boar, deer, goat and so on. In case someone lost their way in the mountains, the Kai Ken was called upon to participate in search and rescue operations.

Sometime during the 1930s, the Kai Ken caught people’s eye and finally received official recognition from the Japanese Kennel Club in 1934.

During the 1950s, the Kai Ken made its way to the shores of America. US military personnel took a fancy to this sturdy breed and many men took the dogs home with them. However, the decade of 1990 truly marked the beginning of the Kai Ken’s migration to the United States. A male Kai Ken was relocated to America, shortly followed by 3 female dogs and later 6 more pups. These dogs brought back in 1990 laid the foundation for the American Kai Ken breed. 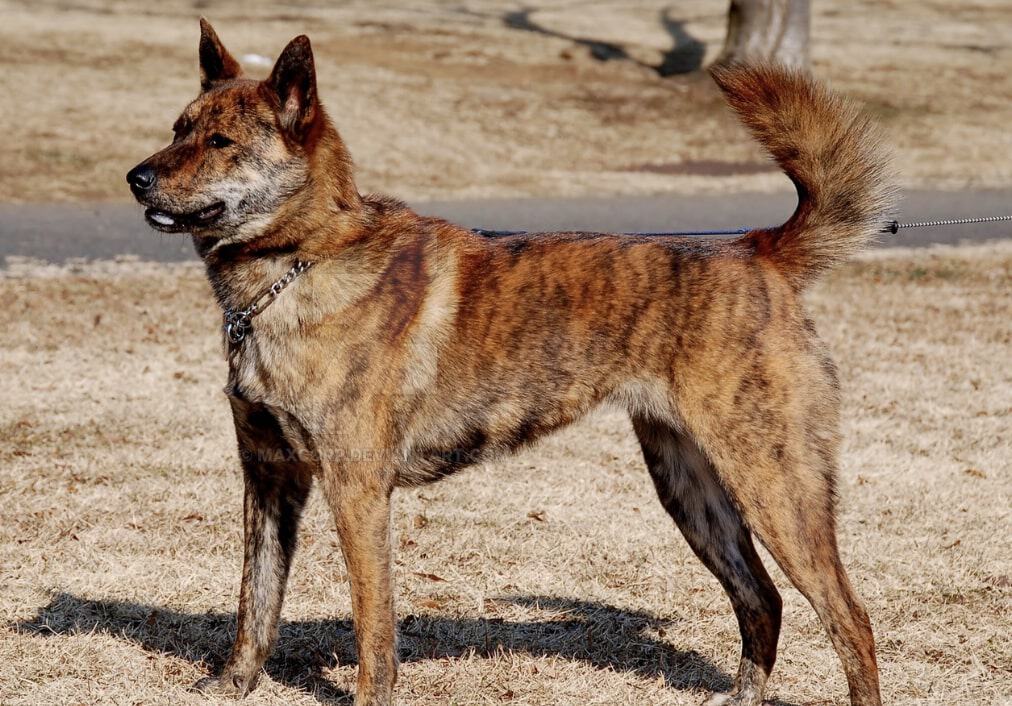 Social skills do not come naturally to a Kai Ken. Whether it is with other pets or children, you need to train your canine to accept them.

When you start its socialization training, a Kai Ken may show reluctance and may even become stubborn. In such a situation, you must use positive reinforcement to encourage socializing and persist firmly, but gently.

Loyal that a Kai Ken is, do not leave it alone with young kids. Deep down, this canine comes with an inherent hunting streak which can surface at the slightest provocation.

Likewise, strangers coming into the house unannounced must exercise caution. Intruders might as well stay away from a house with a Kai Ken for the sake of safety. 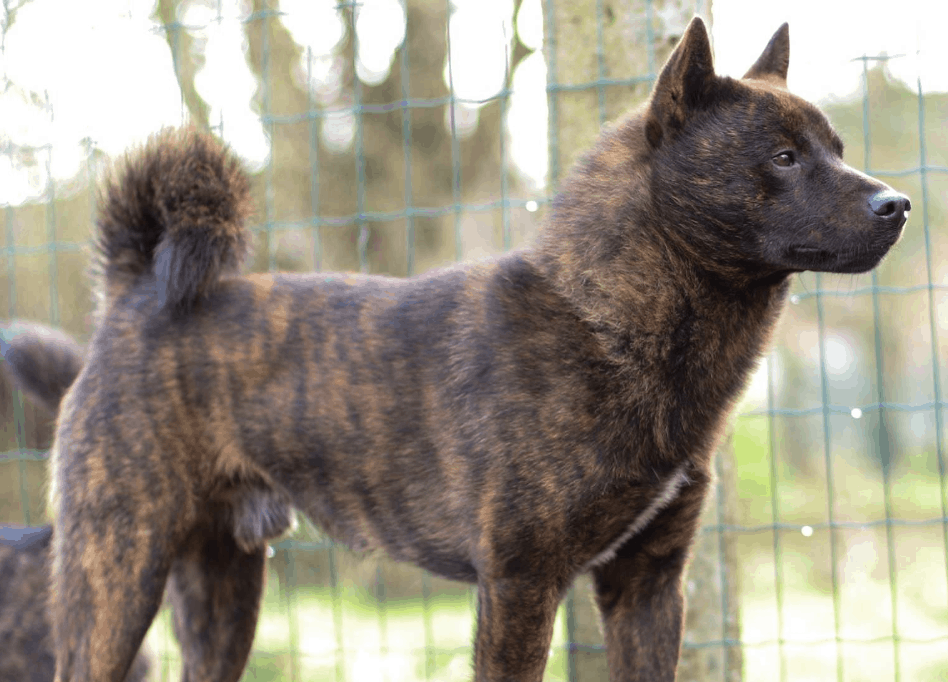 Caring for a Kai Ken entails taking it out for moderate exercise daily, such as a walk/jog lasting for 30 minutes or so. Allow it to play around in the yard on its own, provided it is enclosed and private.

Once in a while, take your Kai Ken out for water sports. Because this breed loves water, your Kai Ken would love to splash around to its heart’s content.

Part of the caring routine also involves training your Kai Ken. While a Kai Ken would do your bidding on most occasions, at times it might assume a stubborn demeanor and simply refuse to respond.

This is where you can use treats. Aspects that you can cover while training include socialization and obedience, both of which ensure safety of your pet in the long run.

For best results, follow a consistent routine for training and exercise. If you take your Kai Ken out for walks at 6PM, make sure to keep the same schedule as best as possible.

They are creature of habits. Doing so would discipline your Kai Ken, much to the happiness and safety of all concerned.

Serve high-quality dog food to your Kai Ken to ensure long-term health. Frequency depends on the age of the dog. A pup (up to 12 weeks old) requires 4 meals and then 3 meals until it is 6 months old.

Beyond that, 2 meals a day would suffice in terms of nutritional needs. You can also feed your Kai Ken human foods like eggs, fruits and vegetables, but only after having consulted the vet. If you do include human foods, then maintain a certain degree of moderation.

Treats form an important part of a Kai Ken’s diet, since they make your training easier. However, too many goodies can cause your canine to put on weight.

Therefore, set an upper and lower limit when it comes to dishing out treats, so that the dog feels rewarded but does not become obese.

By nature, Kai Kens are conscious towards food and water. So the quantity they consume might vary depending on how the canine feels on any given day. At the same time, it loves lapping up water. So, you must ensure round-the-clock availability of clean fresh water.

A Kai Ken’s coat does not require much maintenance. Having a harsh coat with medium-length hair, Kai Kens do not need to be bathed as frequently.

All you need to do is brush the coat and its bushy tail every day (or so) to prevent excessive shedding of fur. To prevent matting from ruining its undercoat, you can use a high-quality dog shampoo.

If you’re having trouble finding one, consult with your veterinarian. That being said, a Kai Ken does not emit any form of odor, which is a big relief for many pet owners.

A sturdy dog breed, the Kai Ken does not suffer from congenital health issues, except maybe ticks and heart worm. Once in a while you can take it to the vet for blood test and thorough examination of the eye and body.

On another note, if your dog does have ticks, they are susceptible to Lyme disease. Read more about the Lyme vaccination here.

If given all the components for healthy living, they can live a very long life. The average life expectancy of a Kai Ken is between 14 to 16 years, well above the average for Japanese dog breeds. 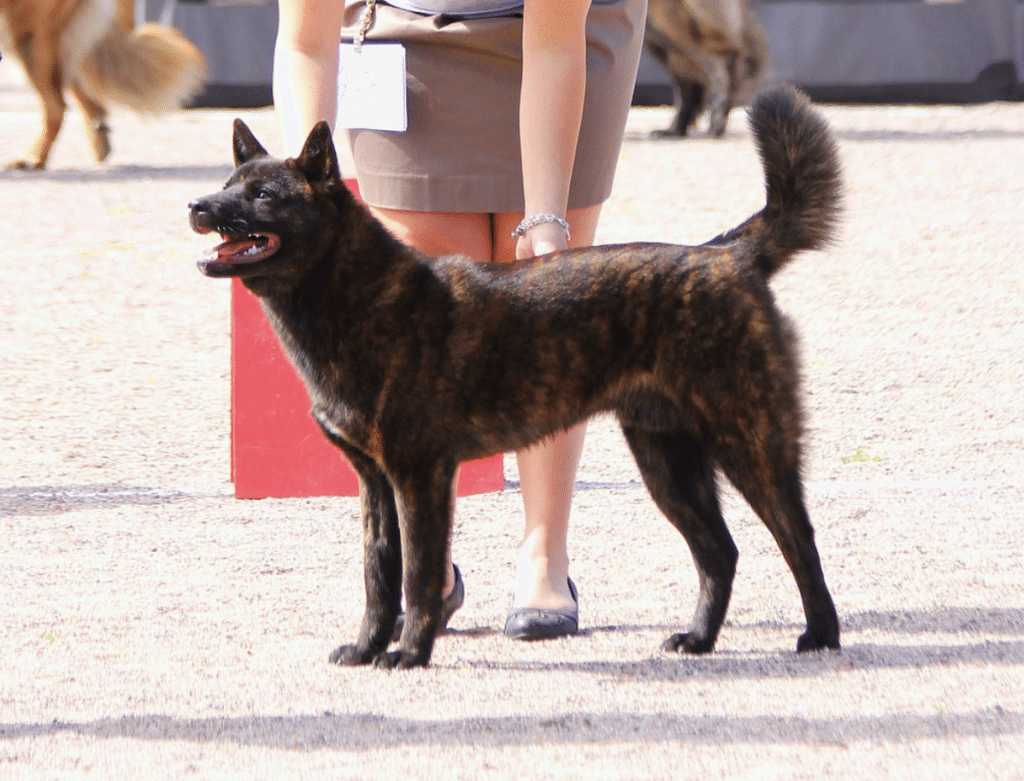 When you consider Japanese dog breeds, the Kai Ken does not naturally pop into your mind. It is still rare in Japan and is yet to be recognized by the American Kennel Club.

But once you get a pup home, it is just a matter of time before it will have endeared itself to all family members.

Raising a Kai Ken will gain you a constant companion who will only be concerned about your presence and remain oblivious to the house and living conditions.

Just make sure that you provide it with a nice warm bed to sleep in. Otherwise, it is bound to come crawling into your bed at night and snuggle next to you without waiting for an invitation.

Breeds Similar to the Kai Ken

The Kai Ken is part of the six native dog breeds of Japan. However, they are only considered similar (in temperament, size and characteristics) to one of the six – the Shiba Inu.

Many owners have also claimed that they physically resemble the Japanese Spitz, but are not similar in temperament and personality.