If you come across a mid-sized active pooch sporting a reddish-brown coat, you may very well be looking at a Shikoku Inu. Continue observing from a distance and you will soon realize that this breed is a lovable bundle of contradictions.

Members of this dog breed are loyal to their owners but immediately take on an aggressive attitude when faced with a stranger. Endearing that it is towards its owner, the Shikoku Inu is also an instinctive hunter. Because of this, a sudden change in behavior and attitude is not at all unusual. Yet, this is what a Shikoku is all about. And it could be one of the reasons as to why people all over the world find this dog breed truly fascinating.

Friendliness: The Shikoku Inus are very friendly towards those they’re familiar with. With proper social training, they can get along with other dogs and people. However, their hunting instincts pose a threat to your other small pets.

Trainability: This dog breed is very intelligent and can excel in training sessions. However, they’re instinctive hunters, which may make it harder for you to train them not to chase after your backyard squirrels.

Grooming: Some of the best things about the Shikoku is that they don’t emit dog odor and they shed a couple times a year. This means a lot less time grooming your dog, and a lot more time enjoying activities with them.

Adaptability: These dogs need a lot of room to run around and need their daily quota of exercise. If you trap your Shikoku in a cramped apartment for most of the day, it could put a strain on them mentally.

Activity: Always give your Shikoku plenty of exercise. They need to expend their surplus of energy on a daily basis. Whether you go out for a jog with them or play catch, physical activity is extremely important for these dogs. 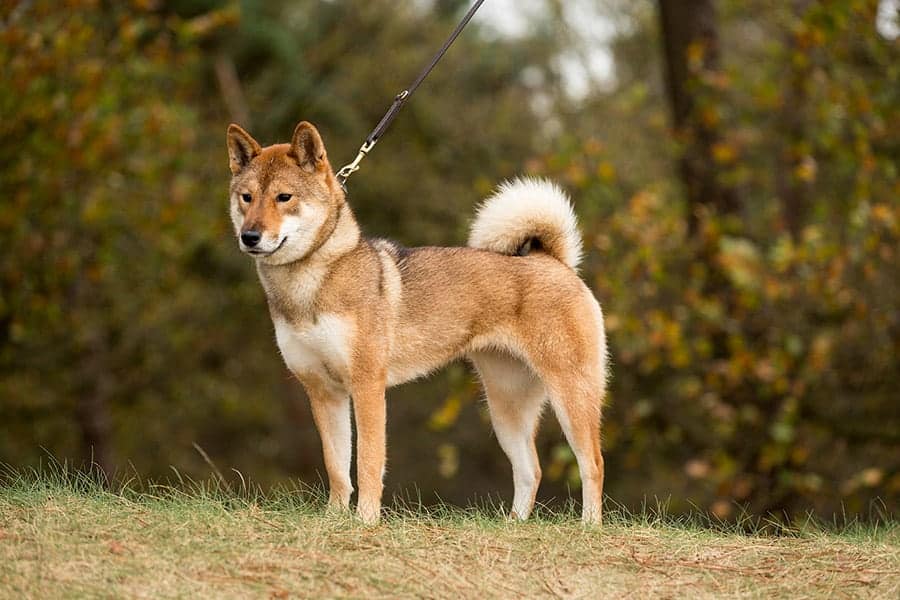 Origin of the Shikoku has been traced all the way to the remote Kochi Prefecture of Japan, which is nestled amidst mountain ranges. Inhabitants of this prefecture, namely the Matagi, decided to try their hand at creating a dog breed that would be agile and tenacious enough to be an exemplary hunter. Since hunting trips could potentially last several days, these dogs were bred with the intention of survival as well.

Size-wise, they are in between the smaller Shiba Inu and the larger Akita Inu. This may be because they are actually closely related to these two popular Japanese dog breeds. True to the intention of its original breeders, the Shikoku did turn out to be a good hunter. In the mountains, it would hunt boars, deer and other animals, thus ensuring that its masters never ran out of food.

Post WWI, poor economic conditions caused the population of the Shikoku to dwindle and they became rare. The breed once again regained popularity and momentum in 1928. This was because of the efforts of an organization that had been given the task of preserving native canine breeds in Japan. With its ranks having been replenished, the Shikoku went on to acquire the status of ‘National Treasure’ in Japan.

Today, the Shikoku Inu is also referred to as the Kochi Ken courtesy of its place of origin, wherein ‘Ken/Inu’ are both Japanese words for dog. Thanks to their remote origins, they are also one of the purest lineages amongst all dog breeds. 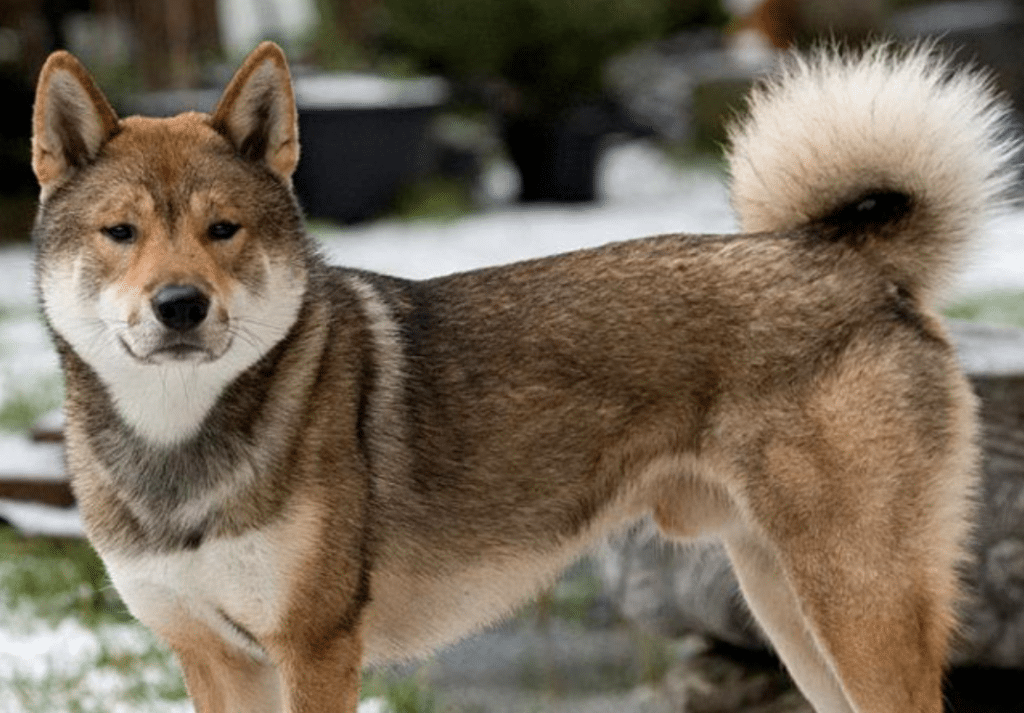 The Shikoku Inus are not tall dogs, as their maximum height reaches only 21 inches. With their average weight pegged between 35 and 50 pounds, they not very heavy either. When you come face-to-face with this mid-sized canine, its broad forehead and prickly ears may first catch your attention. You just cannot miss the triangular upturned eyes scrutinizing everything closely or the long and proactive muzzle sniffing for a potential prey. Sturdy muscles in the neck and limbs ensure that the Shikoku lives up to its reputation as a fierce hunter.

Standard colors for a Shikoku are: black, sesame or tan. However, there is one non-standard color, namely cream. So when you go out to pick a Shikoku, it would most likely be reddish-brown, light brown or blackish-brown. Irrespective of the coat color, on its underside the Shikoku is always white. Some amount of white is also visible on its legs, around its eyes and the snout. 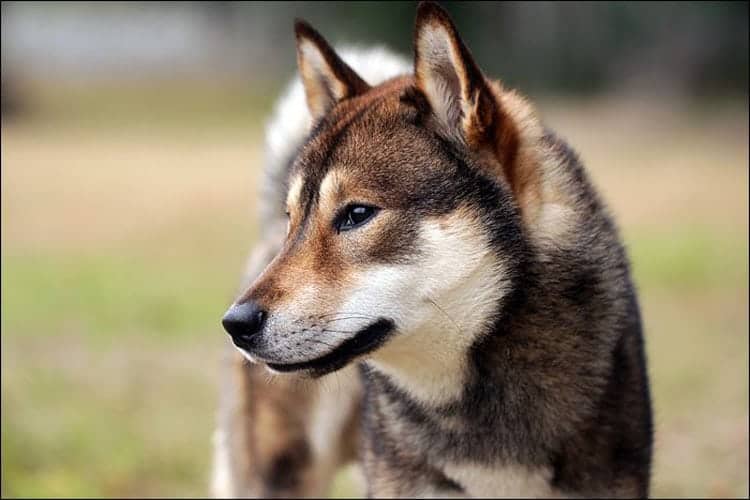 In terms of temperament, the Shikoku Inu is quite stable. This breed is inherently cautious, which explains why your Shikoku may be eyeing strangers suspiciously. It’s also very brave, particularly when it comes across other dogs. No matter how big the other canine might be, they will stand their ground. This is especially true on their territory or if the dog’s owner is nearby.

Shower your Shikoku with plenty of hugs and kisses and you will have acquired a most loyal companion. They want to be loved and will reciprocate the love back. Constant petting throughout the day will certainly lead to an obedient Shikoku.

As a natural hunter, the Shikoku loves to sniff out smaller prey. This might sound cool to you, but it’s bad news for your hamster, cat or any other small pet. If there are squirrels, birds or cats in your backyard, do not let your Shikoku out unsupervised. Unless, of course, you’d like your dog to bring you back a ‘surprise.’

Although they’re very cautious around strangers, these dogs will quickly assess the situation. If it believes the stranger doesn’t intend on harming the family, the Shikoku will greet them by wagging its thick curvy tail furiously. This is usually followed by some licking and nibbling. Sometimes it might even jump at them with a friendly manner.

To ensure that your Shikoku behaves well with other dogs and smaller animals, start its social training early on. Be firm and consistent with rules and expose it to some positive experiences with children. The Shikoku is sure to respond well to training and will also develop an affinity towards children with proper training. 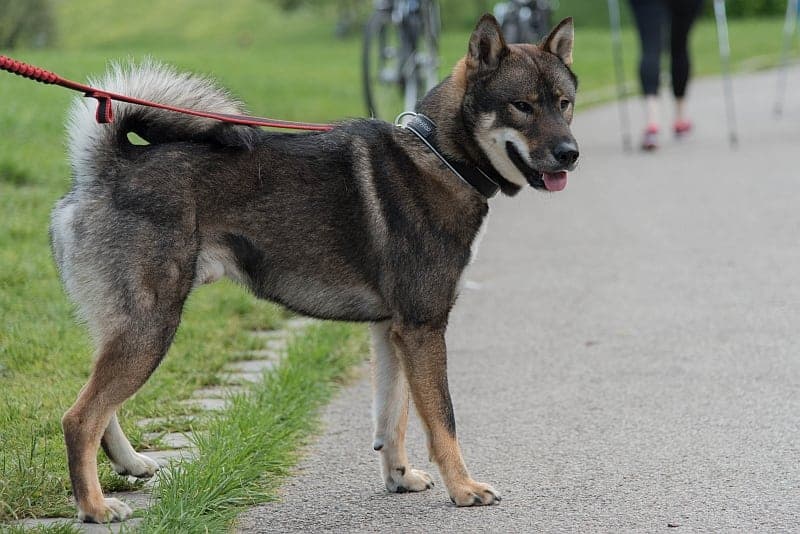 The Shikoku Inu is one of the few dog breeds that do not give off the typical canine odor, thus ruling out regular bathing. In fact, i’ve come across a few Shikoku owners that tell me they don’t smell like dogs. Keep in mind that this doesn’t mean they should never receive baths. It just means, much less than your average dog.

Fortunately, this dog breed only sheds twice a year. All you really have to do is dust off the old vacuum and clean up twice a year. With that said, as long as you brush their undercoat occasionally, they will look good and groomed.

The Shikoku dogs have a lot of energy, so it’s best if you take them out for a walk or jog at least once a day. They thrive in environments with a large secure space for running. This means a large backyard or farm is ideal. However, off-leash exercise is not a good idea for these dogs. They can easily get side tracked and start hunting down the squirrel that caught their eyes.

Remember that these athletic dogs need their daily quota of activity to stimulate them both mentally and physically. They were meant to be hunting dogs afterall and need to expend their surplus of energy. Failure to do this can potentially cause your dog to wreak havoc on your furniture.

This Japanese pure breed is recognized by almost every reputed kennel club of the world, which implies acquiring one is not very difficult. A Shikoku pup can cost you anywhere between $500 and $700, depending on your location and lineage. They certainly won’t cost you anywhere near the most expensive dog breeds in the world. With a reputable breeder, you can expect a nourished and nurtured Shikoku to live up to 12 years of age.

This dog breed is both independent and extremely loyal. This may explain why they’re featured in the popular Japanese series titled ‘Ginga Legend Weed’ wherein there are four Shikoku dogs that assist the protagonist. Train it well to get along with children and other animals, and enjoy its affectionate companionship for many long years to come.

The Shiba Inu and Akita Inu are two other Japanese dog breeds most similar to the Shikoku Inu. In fact, they are both considered to be the kin of the Shikoku. Some may argue that these dogs are the medium-sized version of the two.

The Shikoku also resembles the Kishu Ken in both looks and temperament.