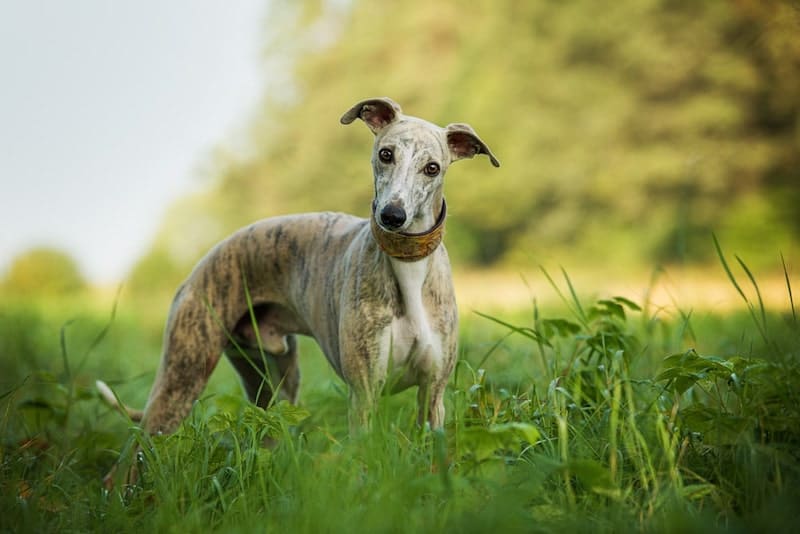 Whippets are Greyound-like breeds known for their lightning quick speeds and their sharp hunting abilities. Always full of energy, the Whippet loves to play and run free. However, is there more to the Whippet than just amazing stamina and agility?

So, are Whippets smart? As for obedience & work intelligence, the Whippet is the 96th smartest dog breed. And while this makes them an average intelligent dog, they excel in other areas of dog IQ. For example, Whippets rely on their quick speeds, but also knowing how to cut off prey in a chase to take down their game. This requires high instinctive intelligence.

Believe it or not, there is more to dog intelligence than just learning tricks and commands. There is a correlation between learning and IQ, but it doesn’t tell the full story. Read on to learn how we measure the intelligence of Whippets and why they’re smarter than you think.

The list of smartest dog breeds we have today is based on one aspect of dog intelligence: obedience and working intelligence. In a nutshell, this measures the dog’s ability to learn commands and their ability to obey those commands.

This dimension of dog intelligence is largely credited to pHD and canine psychologist, Stanley Coren. Though in his trials, Coren had the help of 199 obedience trial judges from North America to help in his mission of ranking dog breeds.

With his dog intelligence criteria, the judges evaluated and ranked as many dog breeds based on the following criteria:

However, it’s worth noting that not all breeds participated in the trial. As such, only purebred dogs were considered for the trials. What’s more, only purebreds recognized by either the AKC or CKC were part of Coren’s trials.

With all the dog breeds that participated in the trials, not all of them made the final cut for the list of the smartest dogs. That said, only breeds with at least 100 responses qualified. Whippets, though, are both recognized and popular dogs. Thus, qualifying for this list.

Whippets performed just average in the obedience and working intelligence trials. That said, these dogs ranked the 96th smartest dogs out of 138 qualifying breeds. But what exactly does this mean for your Whippet?

The Whippet, along with other average intelligent dogs, is able of learning a new command with just 25 to 40 repetitions. Depending on the complexity of the command, they may require an hour to half a day to learn something new.

In addition, Whippets scored decently well in the obedience intelligence section. These hounds will be able to obey a known command (on the first attempt) with a 50% or better success rate. Not bad for a breed that’s considered “average.”

Many of the most popular dog breeds are in the same dog intelligence category as the Whippet. For example, the Cavalier King Charles, Husky, Bichon Frise, Havanese, Greyhound, Boxer, Great Dane and Boston Terrier are in the same group too.

Whippets vs. The Smartest Dogs

Compared to the smartest dog breeds in the world, the Whippet is undeniably less obedient while still needing more repetitions to learn commands. There’s a decent gap between the brightest dogs and these hounds.

What’s more impressive is the obedience. The top-scorers will obey a known command on the first try with a 95% or better success rate. Not only does this make them the smartest breeds, but also one of the most obedient animals in the world.

There’s no coincidence that the smartest dog breeds also happen to be the most popular. After all, it is a bit easier to train “smarter” dogs. These breeds include the Rottweiler, Doberman, Labrador, Blue Heeler, Golden Retriever and German Shepherd.

2 Reasons Why Whippets Are Smart

Whippets may not be as naturally obedient or eager to learn as the Border Collie. However, that does not mean they’re not intelligent dogs. In fact, according to Stanley Coren, there’s more to dog IQ than just obedience and working intelligence.

That being said, the two other dimensions of dog intelligence are instinctive and adaptive IQ. Both of which, may be more important in identifying the true intelligence of a dog. It’s just that these other components of dog IQ aren’t easy to objectively measure.

Instinctive intelligence is the dog’s innate intelligence. That is, what the dog was originally bred for or their special ability and skill set. In the past, all dog breeds were bred for a purpose in society. This could be herding, guarding, tracking or companionship.

For example, Australian Shepherds were bred for herding. Even with little to no human training, they’ll start pushing and moving livestock when they see them. It’s not something they were taught, rather it is instincts. This is instinctive intelligence.

Thanks to multiple generations of breeding for various job, these natural canine skill sets have been ingrained into these dogs.

The Whippet is a sighthound that was bred for hunting. As such, Whippets would track game by sight, coursing game using their quick agility and high speeds. In an open field, these dogs would sprint at the game and take them down with ease.

They didn’t rely solely on their speed (running up to 35 mph). These dogs have an amazing sense of intended direction with the game. Whippets would then try to cut off the small prey with their intuition. This was a battle of speed, but also a battle of wits.

With their sky-high instinctive intelligence and physical gifts, Whippets made some of the best hunters for hares, rabbits and other small game. Just check out their lightning quick speeds:

The final component of dog intelligence is called adaptive intelligence. In short, this IQ refers to the dog’s ability to learn for itself. Without human training for commands, can these dogs learn from their past mistakes, environment and experiences?

My whippet boy is a very clever dog. He will quickly disperse from the crime scene, leaving my dumb Rottie to take the blame.

Cayla’s Whippet shows high adaptive intelligence by learning how to “get away” with bad behaviors. He knows what he did was wrong, but more importantly, he learned that the best way to avoid being punished is to leave the scene quickly.

Another sign of high adaptive intelligence in dogs is when they learn from humans by observing and not from standard hands-on training. Check out this owner’s experience of why he thinks their Whippet is smarter than their Greyhounds.

Haven’t had my Whippet long but compared to our other dogs she hits top scores. He’s worked out how to open doors which the greyhounds just stand looking at.

If a dog wants to get inside a room, there are two things they can do. Learn how to turn the knob and open doors, or stand around and wait for someone to open the door. The former, which this Whippet did, is a clear sign of high adaptive intelligence.

Of course these are just two examples of high adaptive intelligence. However, there are plenty more of these stories around the internet. And if you know any Whippet owners, they would likely tell you very similar stories that show this intelligence.

Owners: Is Your Whippet Smart?

Dog intelligence can be subjective, especially if you consider dimensions outside of obedience & work intelligence. However, the best way to truly gauge these dogs’ intelligence is by asking the people that know them best: real Whippet owners.

So, we decided to survey the Whippet subreddit and various dog forums for answers to this question: is your Whippet smart? Here’s what these real owners had to say:

1. Finellaglen says Yes: “At the moment we have two whippets and the younger one seems far more intelligent than the older one. She is quick to learn new things and gets herself into trouble regularly by devising new ways to scavenge food.“

2. Bigred says Yes: “Whippets are hounds, so they have a different way of thinking. They are not suited to strict obedience type work. Of my current whippets, I have one as sharp as a needle and very bright and clever.“

3. Johanna says Yes: “Whippets derive not only from greyhounds but also from terriers, so they tend to be very smart for a hound.“

4. Seglerwhip says No: “These dogs are not the brightest of the pack, but they’re loving and will make great companions. They really just want to run and play, but don’t do so well with obedience training. They’ll need patience.”

5. Mr Kipling says Yes: “Whippets are smart and quick to learn ( this includes opening doors and other stuff you would rather they didn’t ). They love to run and need proper exercise, not just a walk round the block (smart dog stimulation).”

6. Ottofromtheblock says No: “My whippet is great for outdoor activities. He loves to catch balls and chase around other dogs. But when it comes to learning, he has no interest at all. Definitely not the top smartest dog.”

7. Elyan says Yes: “Very loving and affectionate. Very intelligent too. They do have sight hound traits though, and so can be prone to chase (and possibly kill) other furry creatures.”

8. Monarch says No: “I have to say though, without offending all the whippet lovers, that he is one of the least intelligent dogs I have encountered, and is very nervous. He was really tough to train and is pretty high maintenance emotionally.“

9. Rodewhips says Yes: “Whippets aren’t your typical smart, like a collie. But they understand me so well through my emotions and actions. Sometimes they’re scary accurate in analyzing and predicting what i want to do.”

10. Snowfilly says Yes: “First whippet was the smartest dog I’ve ever met. He’d learn things very quickly and got bored with everything. He’s generally far too intelligent for his own good. Some days he’d do everything, other times he’d just say ‘not today, thanks’ and stare at you.”

The truth is, intelligence does not matter. This is especially true if you plan to keep them as a home dog for mainly companionship. All dogs are smart enough to learn basic commands, tricks and go through house training.

Instead, I suggest finding a dog breed based on their personalities and temperaments. Ask yourself, does this dog breed fit my needs and match well with my personality? Don’t pick a dog breed just because an “expert” claims it to be intelligent.

The only exception would be for specialized tasks. For example, if you wanted a hunting dog to accompany you on trips, picking a dog with high instinctive intelligence in hunting (like the Whippet) may be a good idea.

But for companionship, Whippets also make excellent dogs in the home. As long as you can provide them with their physical activity needs, they’re amazing dogs to own. Pick up a Whippet today and I promise you won’t regret it!