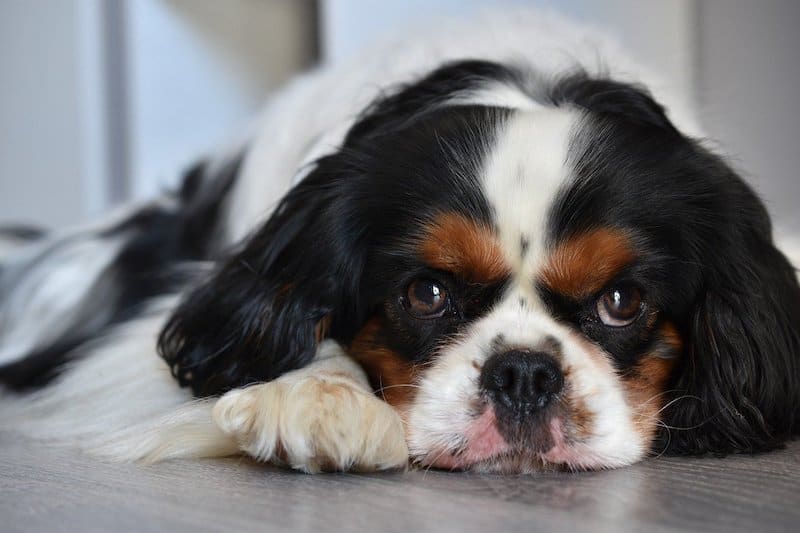 Named after King Charles II, the Cavalier King Charles Spaniel is a top lap dog and companion with a bright personality that’s perfect for any owner. These spaniels love nothing more than to hang around and play, which may make you question their intelligence.

There’s a lot of things to consider when examining about the dog intelligence of the Cavalier King Charles Spaniel. It’s not as clear as day and night. That said, read on to learn how we measure the breed’s intelligence and what makes them smart.

The ranking of the smartest dog breeds is based on obedience and working intelligence. That is, the measurement of the dog’s ability to learn and recall commands. Though flawed, it’s how we measure dog intelligence in Cavalier King Charles Spaniels.

This type of dog intelligence can be credited to Stanley Coren, a pHD and canine psychologist from the University of British Columbia. With the help of 199 obedience trial judges, Coren created his criteria for measuring dog intelligence.

The criteria used for measuring the smartest dogs come down to two things: how quickly can the dog breed learn commands and how obedient they are. As such, the obedience trial judges were asked to record the following:

Not all dogs participated in Coren’s intelligence trials, though. For instance, only dog breeds that were recognized by the AKC or CKC were tested. As a result, this excluded many foreign breeds such as the Rajapalayam or the Jindo dog.

In addition, only dog that had a big enough sample size were included in the final list of the smartest dog breeds. In other words, each breed needed at least 100 responses to be included. This left out all the recognized, but uncommon dog breeds.

Given that the Cavalier King Charles is the top 20 most popular dog breed in America, they did not have any problems testing enough dogs. Plus, these spaniels are recognized by both the AKC and the Canadian Kennel Club.

How the Cavalier King Charles Performed

In terms of obedience and work intelligence, the Cavalier King Charles Spaniel performed average. In a list of 138 dog breeds, these spaniels came in 73rd place – placing them in the “average intelligent” category. There’s nothing wrong with being average!

But what does this mean? On average, the Cavalier King Charles Spaniel is able to learn a first-time command with just 25 to 40 repetitions. Depending on the handler and difficulty of the command, a Cavalier can learn a command in just a couple hours.

When it comes to obedience intelligence, the Cavalier King Charles didn’t perform poorly either. That said, these spaniels will obey a known command (on the first attempt) with a 50% or better success rate! They’re more obedient than you think.

The Cavalier King Charles Spaniel had just average obedience and working IQ during Coren’s trials. And while this is good enough for most owners, there is a sizable gap between dog breeds in this class versus the smartest dogs.

So how much better did the top IQ class perform? Of the 138 dog breeds, only 10 dogs made it to the top category: smartest dog breeds. These dogs were able to learn a new command with fewer than 5 repetitions. They could learn a command in a few minutes!

What’s more, the smartest dog breeds are able to obey a known command on the first attempt with a 95% or better success rate. Nearly every single time, they’ll obey a command, though depending on the handler. It doesn’t get more obedient than this!

It’s no coincidence that the smartest dog breeds are also the most popular. For instance, the Golden Retriever, Labrador, Rottweiler, Poodle, Doberman and German Shepherd are all on this list. After all, dogs that are “smarter” may be easier for families to train.

While measuring obedience and working intelligence is a good place to start, it doesn’t tell the full story when it comes to dog IQ. Even Stanley Coren will admit this. In fact, Coren believes there are two other crucial components of dog intelligence.

The two other dimensions are adaptive and instinctive intelligence. And while they’re more difficult to objectively measure, they may be more important components of dog intelligence.

Companion dog fit for a king

Instinctive intelligence refers to the special ability, skill or job the dog was bred for. In the past, all dogs were bred for a specific role in society. While some were hunters, other were retrievers, guard dogs and even herding dogs.

For example, Border Collies were bred to be some of the world’s top herding dogs. But this requires less training than you think. In fact, a Border Collie will instinctively know how to push and drive the livestock – all with little to no human intervention.

And although most spaniel dogs were typically bred to be hunting dogs, these Cavalier King Charles Spaniel were not. Rather, the spaniels were developed to be warm lap dogs and not much more. In fact, they were companions for King Charles I and Charles II.

To sit on your lap and lick your face. That is pretty much their purpose of their life.

Toy spaniels were among the British favorites well into the 19th century. So for many centuries, this was their instinctive intelligence – the ability to understand human emotions and cater to the owner needs, all while providing companionship.

After all, Cavalier King Charles Spaniels were bred to accompany their humans and owners. With a long rich history in companionship, these spaniels have some of the highest instinctive intelligence.

The final component of dog intelligence is adaptive intelligence. According to Stanley Coren, this is the dog’s ability to learn for itself. With little to no human training of commands and tricks, what can the dog learn and pick up on?

Can the dog solve problems? Will the dog make the same mistakes over and over again or will the dog correct the behavior? These are all good questions when examining adaptive IQ. Even so, this is very difficult to objectively measure.

With that said, we have to rely on anecdotes to assess the adaptive intelligence in the Cavalier King Charles Spaniel. But fortunately, most of these spaniels seem to be adaptively intelligent according to the owners:

This owner’s Cavalier King Charles is used to going on frequent walks. However, he’s able to learn that he’s better suited being by the owner’s side on days the owner is feeling down. This is without question, an example of high adaptive IQ in dogs.

Another Cavalier owner tells us about her dog’s ability to always find a way out:

Cavaliers are incredibly smart and resourceful, and will escape out of a fenced yard. They can use the smallest opening to gain access to the outside world.

Have you ever had to quickly find new ways to prevent your dog from bad behaviors? It seems that no matter what solution the owner uses to keep her Cavalier in the yard, he manages to figure out a way to escape!

This Cavalier King Charles is learning from past experiences to find new solutions. Again, this is a clear sign of high adaptive intelligence. In addition, this dog is solving this problem all on his own! What an incredibly smart dog!

Of course these are just a couple examples of high adaptive intelligence in the Cavalier King Charles. But if you asked any owner, most will share very similar stories proving the same point!

Is Your Cavalier King Charles Smart?

There are plenty of reasons why Cavalier King Charles Spaniels are smart dogs. However, the best way to gauge how intelligent they are is by asking the owners.

That said, we surveyed real owners from various dog forums to ask this question. Here’s what these owners had to say about the Cavalier King Charles Spaniels’ intelligence.

1. Cindy Ludwig says Yes: “Yes, they are very nice dogs, and smart too. There really are no dogs that aren’t – a dog’s smartness depends on the owner’s knowledge and skill.”

2. Thom Kjaer says Yes: “Maybe more emotionally intelligent than anything, our Cavalier can fetch, do tricks and commands. She’s not always the smartest, and doesn’t have the best sense of smell or eyesight.”

3. Cameron Heins says Yes: “They are very smart dogs, easy to train and well behaved. Plus, they are really good family dogs, kind natured and easygoing! Long story short they are good companions, this is a perfect dog for elderly people.”

4. Pattycake says Yes: “I have a Cavalier. They are very intelligent dogs…. any dog is smart, it is up to the owner to train them and to be patient with them.”

5. Allisonjoy says No: “Mine isn’t smart. He just does goober-y things and takes forever to catch onto something! he’s super energetic and always ready to lick your face and scratch your corneas with his little puppy claws though.”

6. Zoesmom says No: “Cavaliers were bred to be companions. While I am sure you can train them to do some cute things they are not the brightest crayons in the box.”

7. Kmes says Yes: “FWIW all of the Cavaliers I know or have meet have been lovely and very trainable dogs. They aren’t whip smart like Border Collies, but they can still be trained to high levels!Just takes more time!”

8. Abbymoo says Yes: “Our Cavalier is SO smart though, learnt to sit in 2 minutes! I miss sleep so much, but he’s totally worth it.”

9. Sentechcavaliers says Yes: “They like to play dumb and do nothing but sit on your lap. But in reality, they’re sneaky intelligent dogs that find ways to have it their way! Don’t be fooled by their silly and goofy looks!”

10. Rodethecavalier says Yes: “There’s more to dog smartness than just being really good at doing tricks or commands. Our cavalier does smart things like being able to predict what were going to do (go for a walk, go to laundry room, etc.).”

Do Cavaliers Need to be Smart?

The truth is that all dogs are smart enough for what we need – the Cavalier King Spaniels are not the exception. In fact, most dogs can end up with the mental capacity of a 2 year old. They’ll be perfectly fine with learning basic commands and tricks.

Instead of asking how intelligent the Cavalier King Charles is, ask whether their temperament will fit you and your family’s needs. When choosing a dog breed, this is the most important question.

Is your Cavalier King Charles Spaniel smart? Let us know in the comments section below. We’d love to hear from you!