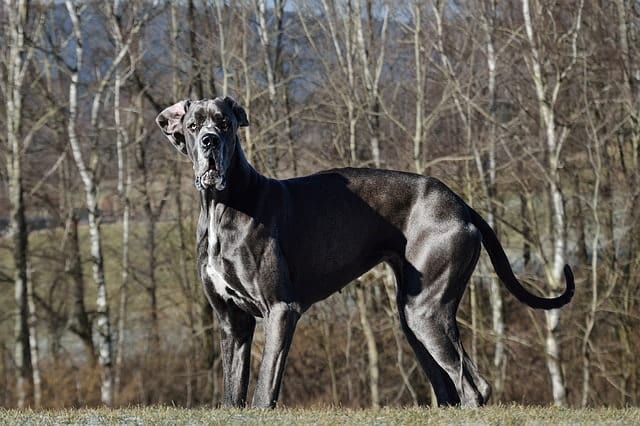 Great Danes are the wonderful gentle giants that excel as nanny dogs and guard dogs. There’s no doubt they’re fantastic family dogs and superb companions. But when it comes to dog intelligence, how do they compare to the rest?

So, are Great Danes smart dogs? Great Danes are average intelligent dogs. According to Stanley Coren, they’re ranked the 88th smartest dog breed for their obedience & working intelligence. However, the Danes’ hunting instincts and ability to learn for themselves make them smarter than you think.

Many people believe Great Danes aren’t as smart as most dog breeds. However, we think otherwise. In reality, they’re just misunderstood when it comes to intelligence. Here’s how we measure their intelligence and what actually makes them intelligent dogs.

As mentioned, Great Danes are the 88th most intelligent dogs when compared to 138 dog breeds. But how did they end up with this ranking? And who came up with this list?

Famed canine psychologist Stanley Coren is responsible for the current list of the smartest dog breeds. However, he had the help of 199 obedience trial judges from the Canadian and American Kennel Club for his research.

With his criteria, Coren had the judges assess and evaluate as many dog breeds as they could. From there, he was able to measure dog breeds according to obedience & working intelligence. Here’s the criteria that he used:

Though Coren received an overwhelming amount of responses, only dog breeds with at least 100 assessments were included into his final rankings.

Even so, not all dog breeds participated in the trials. He also excluded mixed dog breeds and breeds not recognized by either of the two North American kennel clubs. Fortunately, Great Danes were very popular, recognized dog breeds.

Great Danes didn’t perform too poorly, but they didn’t do too great either. Out of 138 dog breeds, Danes performed the 88th best. Their performance with obedience and working intelligence put them in the “average intelligence” category.

This means that Great Danes were capable of learning a new command with just 25 to 40 repetitions. According to the trials, they were also able to obey a known command on the first try with a 50% or better success rate.

Being average is absolutely fine. In fact, some of the world’s most popular dog breeds are in the same canine IQ category. These dogs include the Australian Shepherd, Greyhound, Dachshund, Boxer and the Siberian Huskie.

Danes vs. The “Smartest” Dogs

The smartest dog breeds in the world are coincidentally the top 10. These dogs are able to learn a new command with less than 5 repetitions. In other words, they’re able to learn commands at least 5 times faster than Danes!

Similarly, the smartest dogs will obey a known command (on the first attempt) with a 95% or better success rate. Not only are they fast learners, but willing to perform on command!

Though these dogs may seem much “smarter” than the Dane, they’re actually just really good at obeying and learning new commands. Not to take anything away from the top 10, but it isn’t an accurate representation of dog intelligence.

Some of the dog breeds in the top 10 category include the Rottweiler, German Shepherd, Golden Retriever, Labrador Retriever and the Poodle. All of which, are some of the most popular dog breeds in America.

Is Your Great Dane Smart?

One of the best ways to gauge a dog breed’s intelligence is by asking real owners. Not all Great Danes are highly intelligent dogs, according to some owners. Some will inevitably seem smarter than others.

So, we surveyed the Great Dane Sub Reddit and other popular dog forums for responses to this question. Here’s what the Danes owners had to say.

2. Chubrubs says No: “I have two Danes. I love them to pieces. But, they are dumb. I have had dogs all my life, always wanted Danes. We got them. Compared to every other dog I have ever had, they are just complete airheads.”

3. Bambihelton says Mixed: “I’ve met a few smart ones. I have the derpiest one of all, I swear. As a 12 week old puppy, she took off running and jumped straight down into a 10 ft carport. She didn’t hurt herself, thankfully.“

5. Itdood says Yes: “Now we have our Dane, Lucy. I can’t say I think of Lucy as being a dumb dog, probably because I’m comparing her to Gizmo who was the cutest idiot I’ve ever met. Lucy was house broken within days of getting her. She responds well to our spoken commands.“

6. Witchyitchy says No: “Every dane is different but mine is dumber than rocks. I love her but her goofiness along with absolutely no desire to please can make training pretty slow and hard.“

7. Richie159 says Yes: “Just got my baby great dane yesterday. His name is Norman. He is a huge dork and is a lot smarter than my other dogs. I already love him like crazy.”

8. Mrcyiwon says Yes: “My dane is extremely bright, troublesome in fact. He’ll find ways of circumventing rules, barriers, or other situations. It’s made training great, though.“

9. Notoriouskib says Mixed: “I have see my pup do some really smart things I’ve also seen him do an overwhelming amount of odd things. I just love him for who he is.”

10. Ieatchips says Mixed: “In certain situations my Dane can be quite dense… he can be confined with only a baby gate leaned flimsily against a doorway and constantly has a dopey-eyed look.”

There are a number of reasons why Great Danes performed just “average” on Stanley Coren’s intelligence trials. The first reason why they did so poorly is because, if you think about it, Coren’s test was essentially an obedience test.

Though we think there’s a correlation between learning speed and dog IQ, it’s not fair to standardize an intelligence test based solely on obedience & working intelligence.

Different dogs have different motivators. The Great Dane is no exception. For example, Border Collies (ranked number 1) love to work. They’ll happily do obedience training for the sake of working. However, that’s not the case with Danes.

The Great Dane is a very stubborn dog breed. According to Hills Pets, individual Great Danes can be “stubborn leaners.” And, that’s exactly what they are at times.

So, it makes sense that they don’t always comply in obedience training when compared to other dog breeds. But just because a Great Dane doesn’t obey your commands doesn’t mean they don’t understand what you’re saying.

However, they won’t always want to do your bidding just because you say so. As stubborn as they may be, they’re perhaps equally strong-willed and independent-mined.

Danes are stubborn. Incredibly stubborn. I have yet to meet a more stubborn breed. The key is being more patient than them.

Don’t get me wrong, Great Danes are still extremely loyal dogs. They have a lot of love and respect for their owners. After all, they are known to be dependable nanny dogs.

That being said, Great Danes can be more stubborn depending on the handler during obedience training. For example, a Dane will likely respond much better to their owners than a random obedience judge.

So the key to getting past a stubborn Dane is to be patient and use positive reinforcement. As long as you shower them with love and have a little patience, they’ll come around!

Though every dog is different, owners have suggested that Danes just have a longer maturation period. Oh, and we don’t mean physically.

They’ll reach full adult size around month 18, but will still be a goofy puppy at heart. This “goofiness” is often mistaken for low intelligence.

One owner told us that:

Great Danes take up to two years to fully mature. It’s a bumpy road some times. They are known to have a strong ‘tween’ timespan.

Great Danes certainly aren’t the most active dogs in the world. If you’re looking for a long distance running buddy, try a Husky or Australian Shepherd instead. Danes enjoy lounging around and relaxing instead of obedience training.

One Dane owner chimed in, explaining how people can mistaken their intelligence:

Why Great Danes Are Smart

Great Danes are smarter than you think. Plenty of happy owners will agree with me. But if not with obedience & working intelligence, what actually makes Great Danes smart dogs?

According to Stanley Coren, there are three components of canine intelligence. The other two he’s referring to are instinctive and adaptive intelligence. Both of which, Great Danes have. Let me explain.

In addition to obedience intelligence, instinctive intelligence is another way to measure a dog’s IQ. It refers to the skillset or ability that the dog was originally bred for.

In this case, Great Danes were bred to be skilled hunters, meaning their instinctive intelligence is hunting. For years, they’ve been some of the best wild boar hunters in the dogdom.

They’re able to track them down, sneak up on them and corner them. Not only does this job require intelligence, but strength, speed and bravery. All of which, perfectly describes a Great Dane.

Another component of dog intelligence is adaptive intelligence. This refers to the ability of a dog to learn for him or herself. Given their experiences from the environment, are they able to learn and solve problems?

There’s a reason why Great Danes are such excellent nanny dogs and guardians of the home. They can be protective, but it’s a big part of why they’re such capable watchdogs.

In addition, determining what situations are potentially dangerous or not is not something any dog breed can do. This is why nearly all guard dogs are known for their high adaptive intelligence.

Are Great Danes For Me?

So is a Great Dane for you? Never pick a dog breed based on their “intelligence.” The truth is all dogs, including Danes, are highly capable of providing you with what you need in a companion and friend.

Always pick a dog breed based on their temperament and personality. Instead of asking if Danes are smart, ask if their personality matches yours. Don’t let these “experts” tell you how smart a dog breed is.

These dogs are patient, friendly and dependable. If you think they’re right for you, go for it! Great Danes are some of the best family dogs you can find.